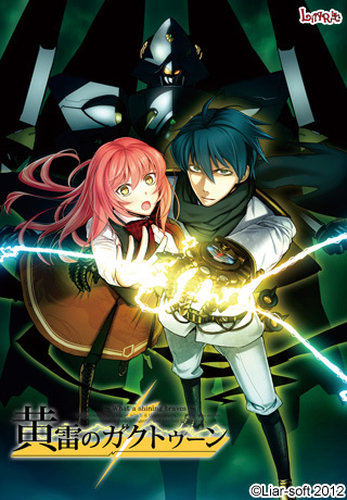 Gahkthun of the Golden Lightning

Once upon a time, the amount of visual novels inundating Steam was a pipe dream for fans of the genre. While many English developers were creating visual novels and a good handful were being translated, it was still mostly outside the confines of Valve’s popular storefront. Now, things are tremendously different. There are hundreds of games for someone to choose from ranging in all manner of themes as well as level of quality. Gahkthun of the Golden Lightning made its official English-language debut earlier this year directly from MangaGamer, but has now seen a rebirth via release on Steam. This is great news for all involved because it means this stand out game may finally get the attention it deserves. Once you get past the odd name, you’ll find that this is one of the higher quality releases available on Steam – and certainly one of the more eccentric.

It all takes place on some artificial island which houses a massive school and living accommodations for its students. These aren’t just your typical students, as each happens to be an Art Bearer. What this means is each has some form of special ability worth fostering at a special school. The whole place appears modeled after an earlier era of France, too. You see, alongside the magical Arts, the setting is basically an alternate 19th century with its fair share of steampunk elements. The alternate history concept is used liberally as many of the game’s characters will be instantly recognizable – for their names, anyway. The most prominent of these characters is none other than Nikola Tesla himself. Instead of appearing as an engineer, however, he assumes the role of an electricity-powered hero who hopes to save every single student on this island.

The very first student he saves, however, is our protagonist Neon Scalar. Unlike the rest of the students, she has no Art to speak of. Because of this, she should not even be attending the academy and must deal in the dingy Dropout District in order to make money to stay enrolled. As her harassment grows from overworking to something more sinister she finds herself bought out of student slavery by Tesla. Well, sort of, but now she’s effectively his live in maid and a member of his school club. This might sound up like a prettier version of the same old setup we see in tons of school-based visual novels, but luckily Gahkthun of the Golden Lightning is anything but the usual. As the story begins, we are aware that something very sinister is going on in the backdrop of The Academia. It’s not just that “second class” students like Neon exist. Something seems to be going on, both with her and the entire student body, which make Tesla’s proclamation of saving everyone actually carry weight. 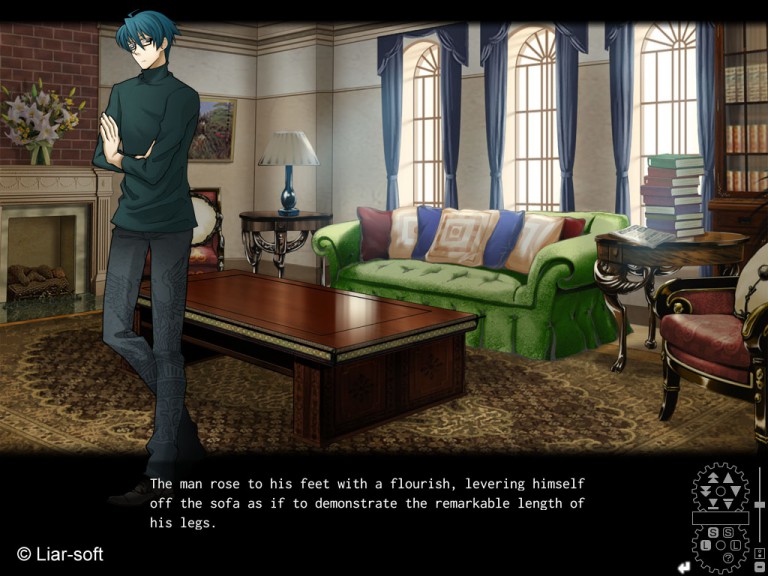 One of the most impressive aspects of this game is simply the writing. As far as visual novels go, writing is that key ingredient which can save or demolish a title. Fortunately, the writing stands far and above many other genre contemporaries (though some may find it a bit too flowery). The story successfully navigates from moments of levity to serious action sequences with no issue whatsoever. Each character also feels distinctive without falling immediately into an obvious trope. Neon, in particular, feels like a great protagonist to counter Tesla’s many eccentricities. Unlike other visual novels with sexual content, it also feels as though our main “couple” get far more time to know each other to increase the believability of their relationship. It’s imperative that the writing be stellar when a game is this long. While not the most drawn-out visual novel, it still took me a little over twenty hours to complete the entire thing.

Gahkthun of the Golden Lightning is basically a kinetic novel, meaning there’s basically only one ending to receive. There are still, however, choices interspersed throughout the game. These simply can either push you down the path to an immediate bad end (by selecting the wrong choice) or getting an extra scene (by selecting the correct choice). It’s not all that hard to get these right as long as you save before making a selection. The choices add a bit more excitement to playing, but mostly seem unnecessary. The main storyline is engaging and thrilling enough that I don’t feel there was a need to interject this bit of interactivity. While the bonus scenes can be fun, they’re often quite short and are not particularly relevant to the main narrative at hand. This mature storyline brings with it a fair share of perilous sequences and sexuality. 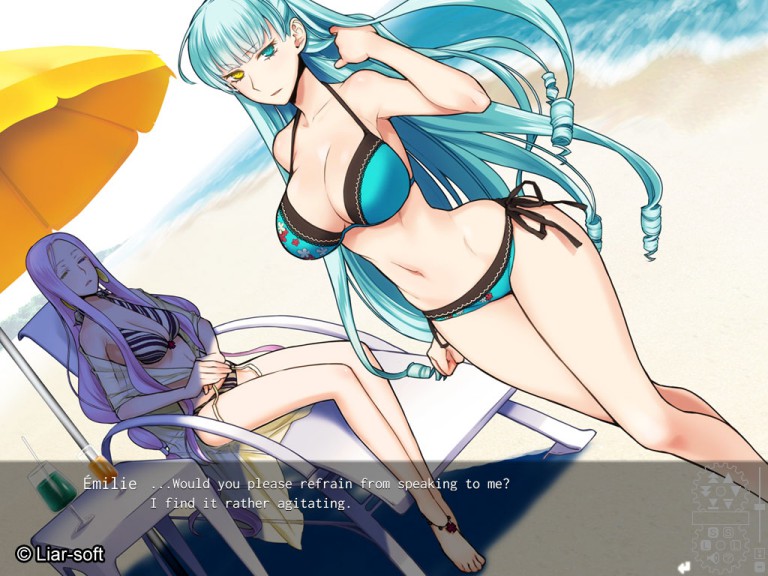 There comes a time in every visual novel fan’s life when they play their first adult title in the genre. Whether fortunately or not, until very recently, the only way to acquire such a game was to dodge Steam and opt for some other distributor. Recently, with the release of Kindred Spirits on the Roof, it became apparent that sex in visual novels was acceptable as long as it wasn’t deemed “hardcore” in depiction. What some thought might have just been a fluke is proving a new stance as Gahkthun of the Golden Lighting has now appeared on Steam completely uncensored. It’s important to know what this doesn’t mean, too. It does not mean you’re getting some completely ridiculous eroge with erotic sequences every few hours. Instead, you’re getting an incredible story which just so happens to deal in sexual content on a small handful of occasions. Those who dislike such scenes, however, have no means to skip or hide them.

It would be impossible to fully discuss Gahkthun of the Golden Lightning without paying tribute to its skillful execution on both a visual and audio level. Each character in the game is voiced in Japanese and each offers professional-sounding acting. The soundtrack, too, is impressive in its sweeping scope even if you tend to hear the same songs relatively often. Of course, the graphics are an absolute treat. Character sprites are all gorgeous as are the landscapes they frequent. CG sequences carry this superb quality with them, especially when animated elements occur to spice up scenes further. The only issue is that a few actual animated sequences always seemed to chug on my PC. It appears this, as well as other slowdown issues, are a flaw inherent with the engine rather than anyone’s computer specifically. Beyond that, though, there are absolutely no complaints about these gorgeous graphics. 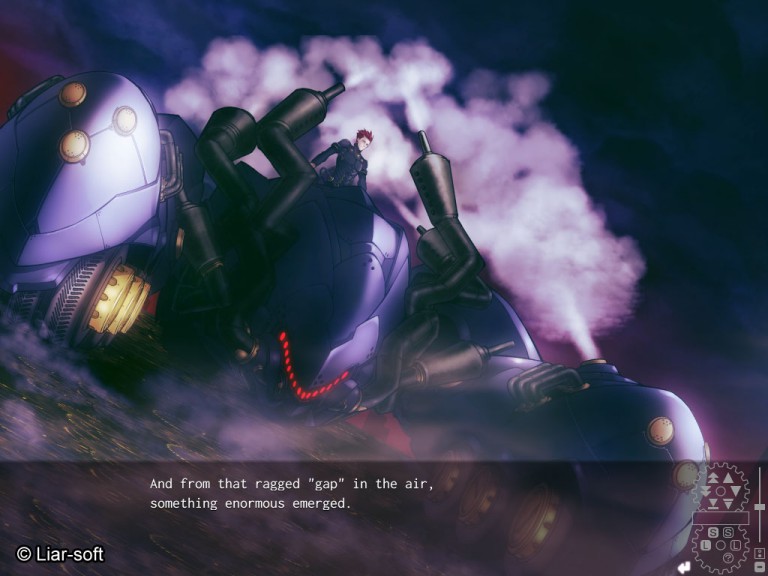 Anyone looking for an action-packed visual novel should look into Gahkthun of the Golden Lighting. So should those seeking out a heartfelt, character-driven narrative. Honestly, as long as you’re not opposed to a steampunk and superpowered rendition of the 19th century, then this is quite an engaging tale from start to finish. Few visual novels can manage to create such a distinct setting and ground it as realistically. It’s also impressive whenever an over fifteen hour title can not only keep you reading, but get you obsessed with seeing it through to the end. Sure, there’s a few oddities here and there, but overall Gahkthun of the Golden Lightning has rocketed up the list of must play visual novels on Steam.