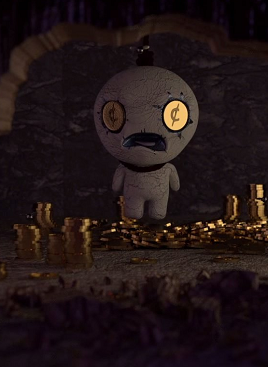 The Binding of Isaac: Afterbirth

Taking heavy influences from religion and his personal life, Edmund McMillen somehow managed to mix some heady themes of madness into a fun, gross out shooter with The Binding of Isaac. Taking the rogue-like genre and turning it on its head, the game was stuffed with his unique art and addictive items that made each attempt at plumbing its depths unique. He wasn’t satisfied with the results, though, and decided to rework the entire game in a new engine, adding so much content that the title was metaphorically bursting at the seams. Titled The Binding of Isaac: Rebirth, the title made its way onto consoles in addition to the popular Steam release. Deciding that no one should ever be finished with this game, Mr. McMillen teamed up with Nicalis Inc once again to cram even more content into the already dangerous package. This expansion, The Binding of Isaac: Afterbirth, has finally seen release on consoles. It was worth the wait.

As a quick note to those that have already been playing the expansion on Steam, the answer is that this version does not have anything that was not seen there. Many players first cut their jagged, crooked teeth on the console version of this title, however, especially on PlayStation 4, where is was a free Plus title. The question for these fine folks is if this expansion pack is worth the eleven dollar asking price. The answer to that is absolutely.

As stated before, the original Rebirth was positively massive. There is a huge amount of items to pick up and try out as Isaac attempts to escape his mother, who is hellbent on sacrificing the weeping tyke to God. During a normal playthrough, players can take Isaac from a small, unassuming, naked boy to a beast covered in horrible growths that shoots spider-killing blood out of his eyes. The dozens of new items improves upon the randomness. A particular new favorite is the Jar of Flies. Not only is it a damn good Alice in Chains ep, it’s an extremely useful tool in this world. Should players luck upon it, Isaac can use it to collect flies in the world. When needed, he can unleash them, sending a veritable swarm at the enemies. 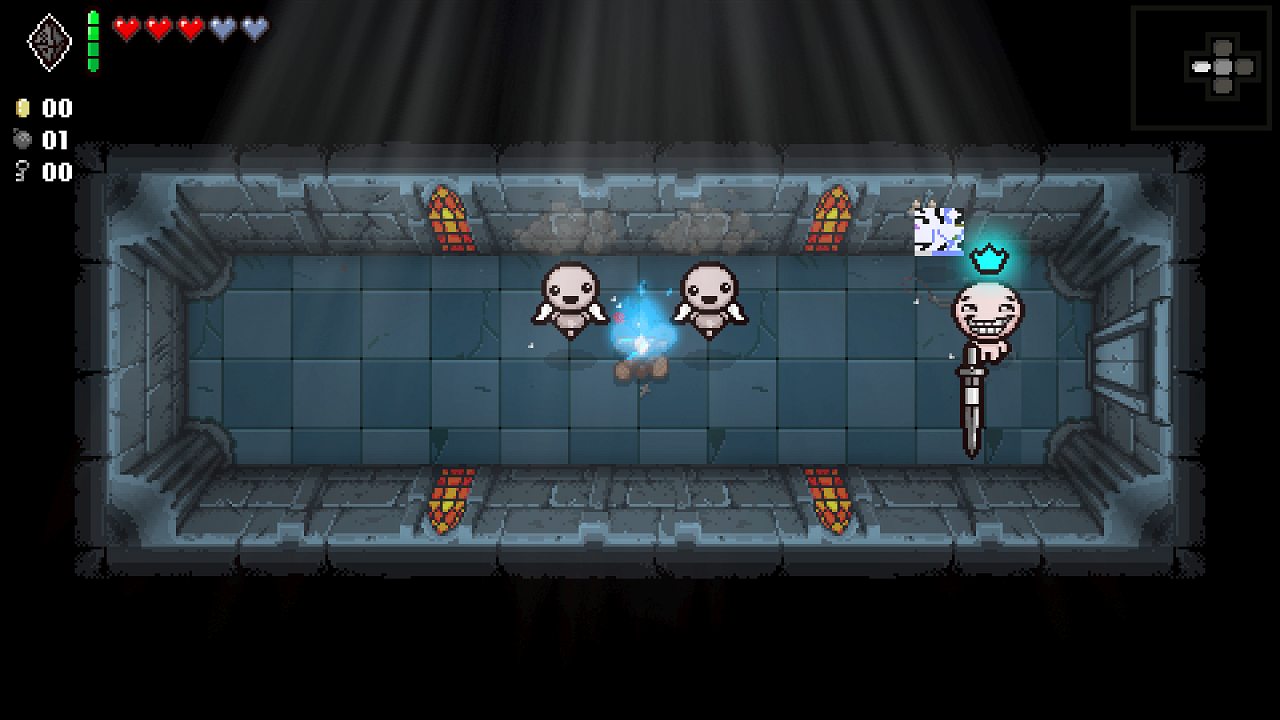 Some have taken issue that there isn’t much explanation for the pickups in this game and Afterbirth does not change this. This is an intentional design decision and one that is appreciated by this gamer. Part of the allure of Isaac is experimentation. Learning how new found items work and developing strategies on the fly keep the gameplay exciting. This title thrives on the sense of discovery and Afterbirth injects a whole new dose of the stuff.

One aspect that Rebirth really needed that has been delivered in Afterbirth is the addition of new bosses. Monstro, his sequel, and Gurdy have been cried to death so many times that it begins to feel like a bizarre form of bullying. The new bosses mean more of a mix up of these encounters. This means that not every run will include dodging Monstro’s spray as he tries to jump on Isaac’s head.

Still, though, some of the new minor enemies feel uninspired. Trying to create a larger variety of creatures to face in a game that already featured so much, and having these critters feel like they “fit in” is not an enviable task. It seems like many of the new enemy designs are along the lines of “we’ll take this existing one and make it a cyclops.” That, or taking other existing enemies and adding new properties. It would be inaccurate to go so far to say that the less inspired new foes are “failures,” but it feels like a missed opportunity. 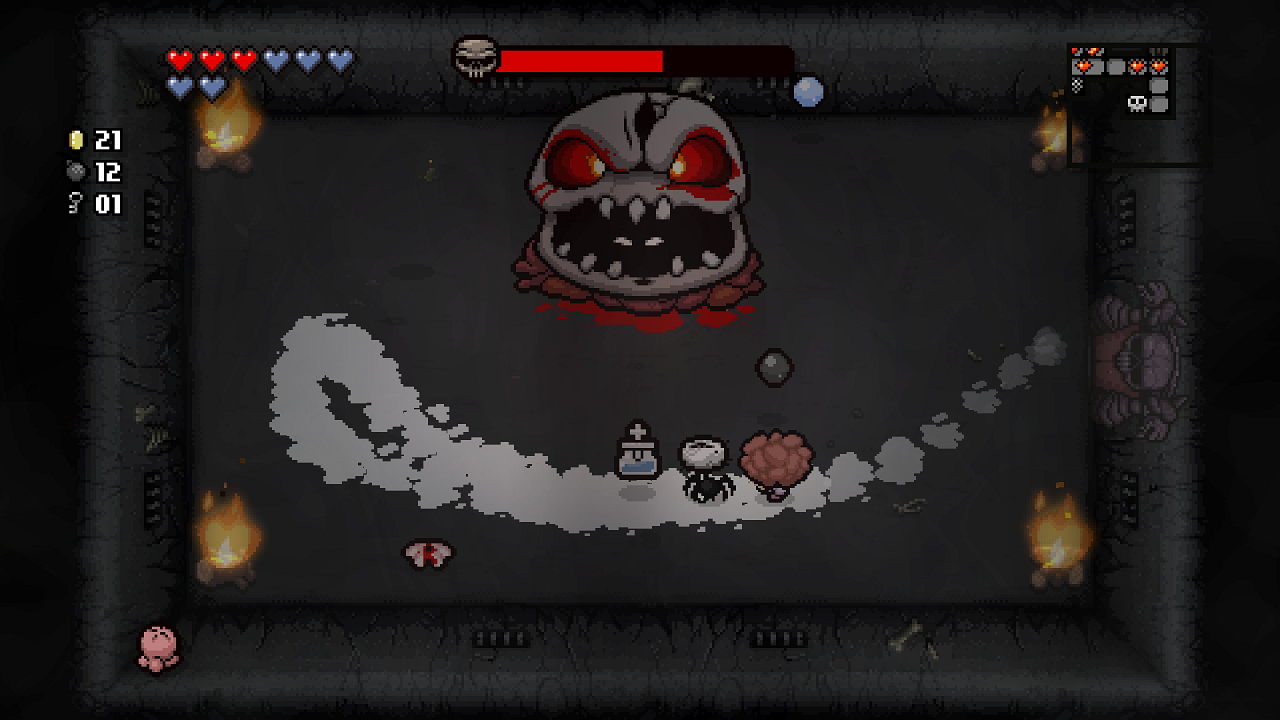 There are many other cosmetic tweaks to the base game. An alternate soundtrack as been added in, which allows for some much needed variety when attempting a fifth run in an evening. Lamentably, while the new tunes are good, the original soundtrack is better. There are also graphical and environmental additions, such as burning basements and dripping caverns. This says nothing about the new areas that have been added in, along with loads of new secrets.

What really fleshes this game out are the 1000+ new room layouts that can be randomly slotted in the rotation. The base ones still make appearances, but the immense variety offered here is both a blessing an a curse. The blessing is because there is so much more to see. The curse is that I used to be good at this game. Not so much anymore, apparently. 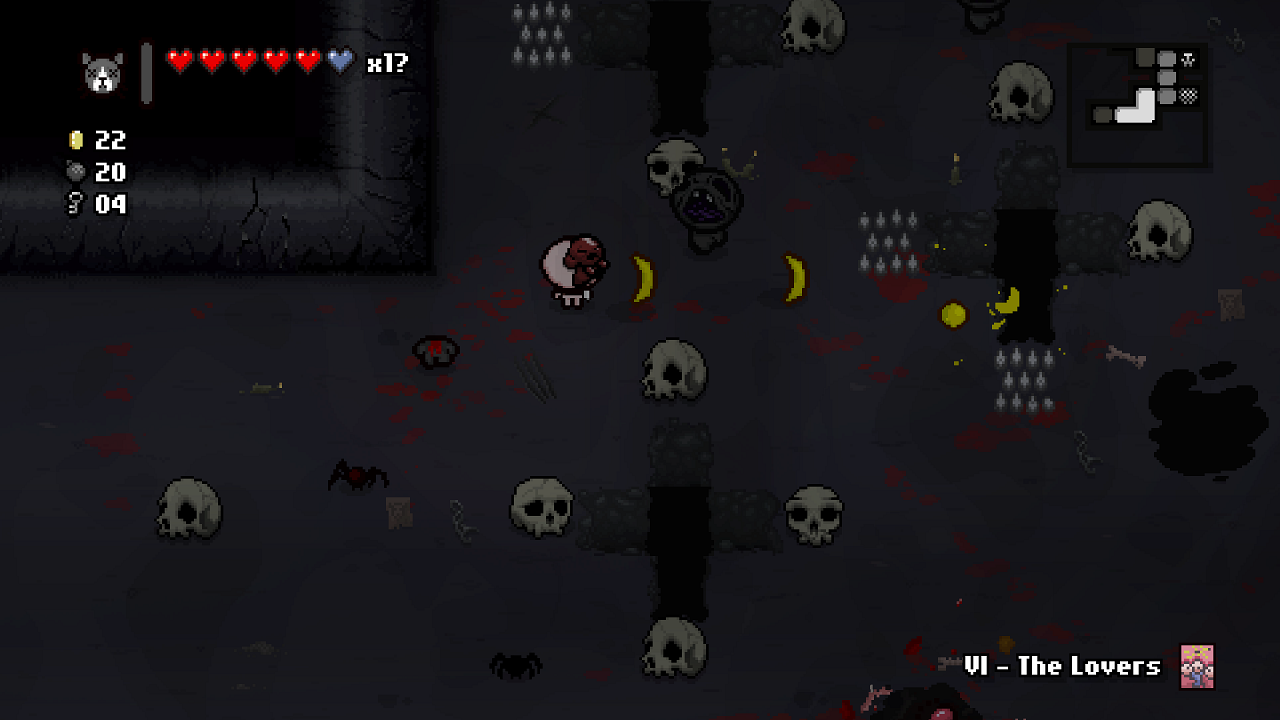 Of course, no review of Afterbirth would be complete without covering the new Greed Mode. This new mode can best be described as “quick mode.” Basically, this mode removes the exploration aspect of Isaac and squeezes the game down to a focused, super difficult wave based challenge. The player starts in a room, with a chance to pick up one power up. To start the waves, the player steps on a button, and proceeds to fight off the enemies as a timer ticks down. Should Isaac fail to clear all of the enemies before the timer expires, too bad. The next wave is coming. If it becomes too much, the next wave can be cancelled by stepping on the button again, at the cost of half a life point.

This mode is really well designed. Money drops at the beginning of every wave, meaning that there is ample funds to power up in the store when the waves stop. It’s a great place to try out new items and tactics, while being brutally hard. Numerous attempts at this mode were made by this reviewer, and only the third floor has been reached. One could argue that it’s poorly balanced in that it is so difficult. However, considering the slow build in a normal run, jumping right into the hard stuff to practice and improve is pretty cool. 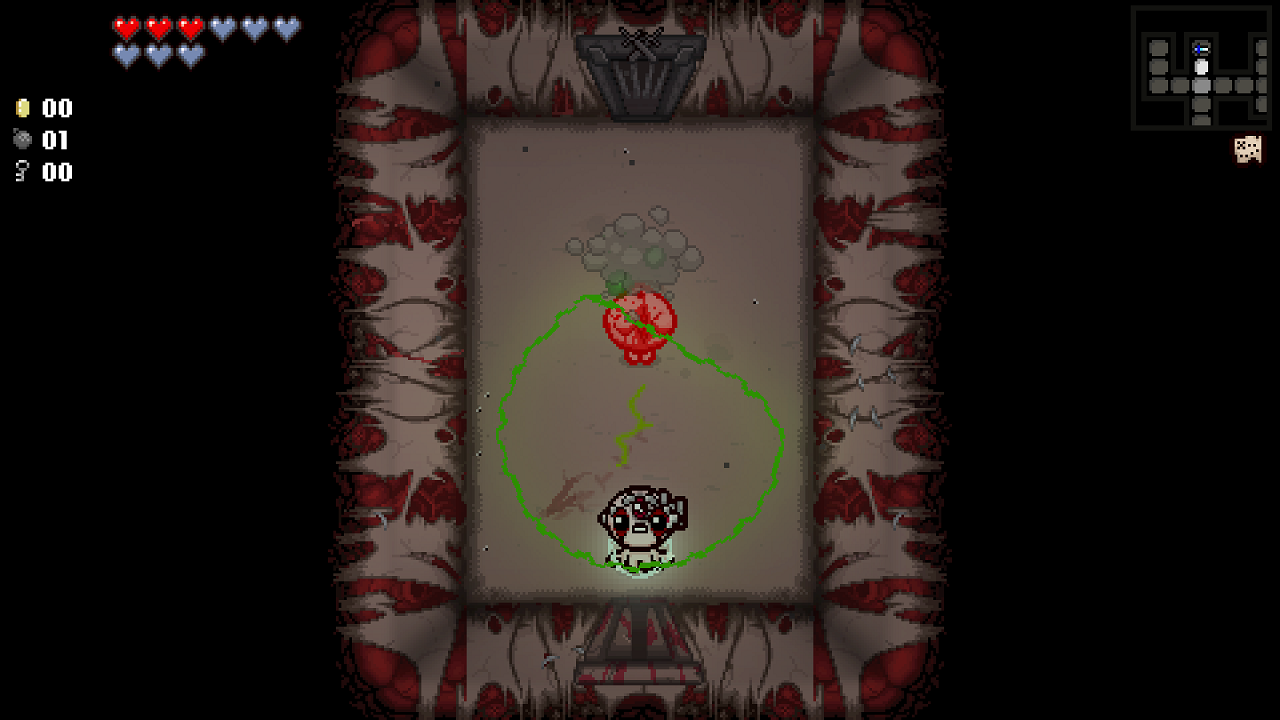 The Binding of Isaac: Rebirth deserves every member of its rabid fanbase. The game is is filled with so much to find and explore; there are innumerable secrets to discover and things to figure out. Afterbirth adds more of that and anyone who enjoys the original would be well served to download this pustule-covered add on. The argument can be made that, while it adds so much stuff, not all of it comes from the same deeply creative stone from which the base title was carved. Some of the new enemies feel less unique and some of the additions don’t top the original. Basically, anyone turned off by the original is not going to suddenly change their mind by throwing a big glop of Afterbirth onto their hard drive. That’s okay, though. It was never meant to be that. Instead, this is expansion pack gives exactly what fans want: more.