I’ve recently started my initial playthrough of Uncharted 4: A Thief’s End, and as a massive Uncharted fan, I was giddy as sunshine and rainbows to dive back into this world for one final go around with Nathan Drake.  Surprisingly, though, there are some elements implemented throughout the game that have me thinking less about Uncharted and more about The Last of Us.

To start out, I should make it clear that Uncharted 4: A Thief’s End is a fantastic game and one of the only games on the PlayStation 4 that truly lives up to the current gen potential. It seems as if some core mechanics from The Last of Us have bled into Uncharted in a distracting way that pulled me out of the game’s total immersion more than once. The Last of Us and Uncharted 4: A Thief’s End share a lot of common mechanics such as moving objects like pallets and dumpsters to traverse high and hard to reach levels, pressing the triangle button to boost yourself or another NPC up ledges, obstructive teamwork object moving, the item interaction menu, searching for hidden and optional dialogue, the  item interaction indication icon (that white circle that fills with a triangle when you get close enough to interact with it.) and the static “emotional” main title screen among many others. 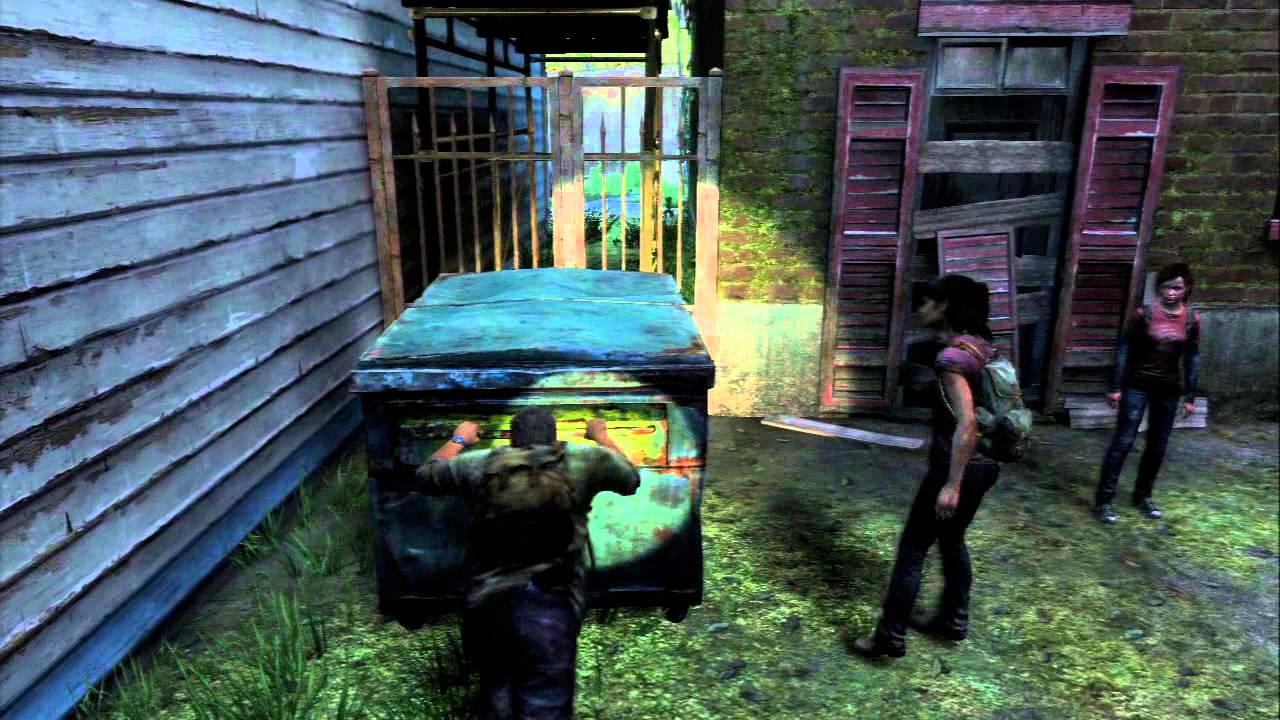 The main title screen is a drab and basic experience compared to previous entries to the series. All the player is greeted with is a uninspiring background with an almost dead silence to over lay the image. Whereas this type of title menu fit perfectly for The Last of Us, due to the world the game was set in, it feels misplaced and unnatural with Uncharted. The Last of Us was a dying silent world and its inhabitants were either dead or remaining silent so as not to draw any clickers to their position. Uncharted’s world on the other hand is neither dead nor dying and after booting up the game for the very first time I was met with a drab and downright depressing introduction. I didn’t feel like I was about to be set off on an adventure at all. In previous titles the player was first introduced with an aesthetically pleasing background and various versions of “Nate’s Theme” that set the mood and got players ready to delve into this action-packed adventure, but this time around we are instead met with a hauntingly dreadful theme that neither buckles you in for an action-packed adventure nor feels impactful.

In The Last of Us, the title screen background and the overlaying music matched up perfectly; it actually felt impactful and prepared players for the emotionally frightful tale that was about to be spun. This time around, however, it felt like the Naughty Dog crew simply forgot to overlay “Nate’s Theme 4.0” as the main title’s music track before shipping the game. The menu screen just looks and feels like it was copy and pasted from The Last of Us, as it is basic and clean with nothing to personalize it or make it stand out or get you ready and excited to jump into the game. This menu title screen just feels out of place and like Naughty Dog was trying to hard to convey to the player that there are major impactful emotions.

Naughty Dog is one of my favorite developers because their main focus is on storytelling and making their characters feel believable and more than just another video game character and they do a damn fine job at hitting all those notes. Nevertheless, ever since the massive success of The Last of Us in 2013, it feels like they all off a sudden turned into artsy snobs. What I mean by that is they make us feel like in order to make a impactful and impressive game, one must cut-ties with their past entirely by putting away childish things (like the cartoony Jak and Daxter and Donut Drake) and make everything moody and gloomy all the time. I guess if you were to look upon Naughty Dog studios as if they were a developing human being, their earlier games such as Crash Bandicoot and Jak and Daxter would be considered as their “early childhood” while The Last of Us and Uncharted 4: A Thief’s End would be considered as their “moody teenage years.”

Throughout half of my first playthrough of Uncharted 4: A Thief’s End, almost every step, interaction and encounter felt awfully similar to that of The Last of Us. Either it was because the team that worked on The Last of Us also worked on Uncharted, or because this is Naughty Dog’s “thing” now, their signature mark if you will. For example: the switching of character perspectives. This is a good way to not only tell a story and push a plot forward, but it can also show how a character became the way they are or how that character feels about a situation compared to the main protagonist. When I was first placed into Sam’s shoes I wasn’t shocked or excited like I was when I was placed into Ellie’s shoes, which varied completely different than Joel’s. When playing as Sam he basically moves, fights and shoots just like his brother which may make sense, as he was the one who taught Nate everything he knows, but instead of sitting there thinking to myself “wow, I’m playing as Sam and this is a completely different feel than playing as Nate,” I instead think “this is like that Ellie section in The Last of Us but a lot less meaningful.” Don’t get me wrong, I would rather have this section of gameplay than a cutscene or dialogue explanation of past events and I do realize it pushes the story forward and introduces a villain to the game board, but this among other things draws to many comparisons to The Last of Us and not in a good way.

The things that bother me the most are the little things. They are small, but they distract and pull me out of this world, reminding me of another game every single time they happen. The team lifting wooden pallets and dumpster blocks on wheels keeps making appearances throughout the game and feels like it did in The Last of Us. Even worse, the hand-to-hand combat fighting mechanic has turned into The Last of Us as well. When engaging in hand-to-hand combat in Uncharted 4: A Thief’s End, all you do is do what Joel does, which is mash square to beat on some guy’s face or mash triangle to escape a grab. Although I rather like this idea, where your teammate at the time will either come to your recuse when grabbed or help you double team up on a baddie, it feels like The Last of Us once again. Where Ellie would jump on a baddies’ back who has you in a grab, instead of the encounter happening at random like in The Last of Us, now you’re just pressing triangle to trigger the encounter. While this was unpredictable in The Last of Us and felt awesome the first time it happened, making Ellie feel like a true companion through its hostile world, it does nothing for me in Uncharted besides remind me of past games.