What is it about dungeons that they can’t just be a logical progression of functional rooms housing an obvious purpose?  Every single one is a collection of open areas and corridors assembled in a haphazard way, but the monsters that make the place their home seem to like it so maybe it’s just a layout based on a different thought processes.  Maybe the internal logic that makes a human home so purposefully designed is weird and wrong to a kobold, and the long corridors are just what a subterranean wolf needs to stretch its legs.  Just don’t think too hard about “subterranean wolf” and it will all make sense.  The point, though, is that these room/hallway combos can come in an infinite variety of forms, and it seems like there’s always another semi-heroic adventurer ready to explore their endless permutations.

Mana Spark is the latest action/rouguelike to pop up on Greenlight, and it comes with a ridiculously playable demo to show off its gameplay quirks.  The adventurer is a boy armed only with a bow and arrow, and he doesn’t start off particularly strong.  Little rock-throwing gremlins only take a single shot to eliminate but wolves are much tougher, and the bow has a reload time that feels like a reasonable approximation of forever when running away from a charging angry canine with an arrow in its butt.  Then you start finding permanent skill perks, one per level plus another from a random selection of three if you can afford the between-level store, and survival starts to seem at least a little more likely.  Faster reload times, heavier damage, poison, piercing shots, more health, and multiple arrows per shot are the current perks, but seeing as the demo is a total of four levels, with a single boss encounter on the bottom floor, it seems likely this is only the start. 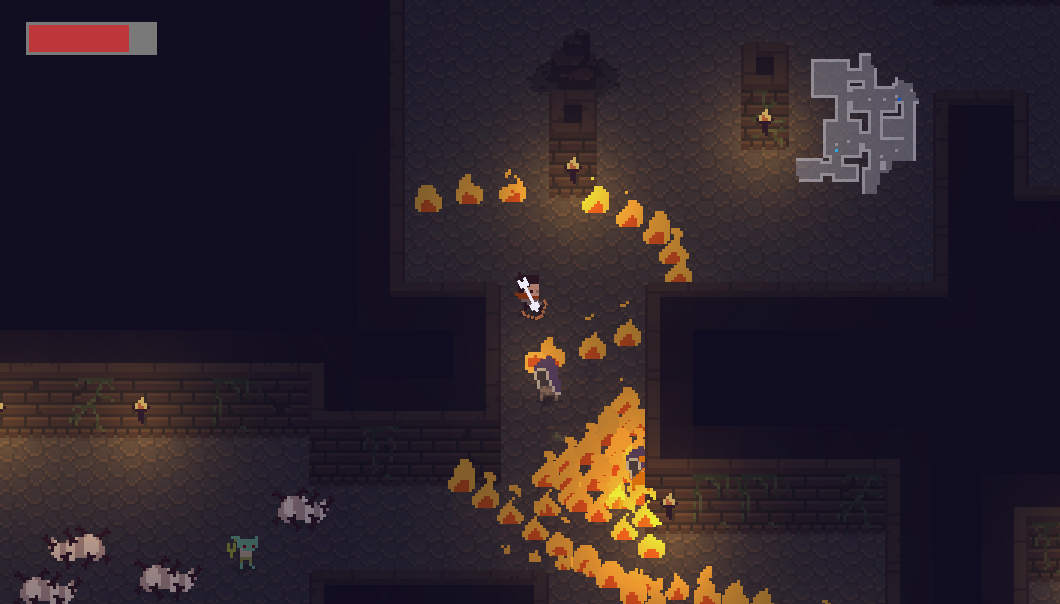 There’s also only a handful of monsters at the moment, but the fun thing about them is the way they team up for more powerful attacks.  A gnome might hop on a wolf to create a faster unit that also can fire back, while a wizard can enchant the axe of a troll (lizardman?) to give it a vicious fire attack.  Worse, the wizards can team up to create a combo fire spell, sending out multiple tracks of flame or even limiting your movement by surrounding you in a circle of fire.  Sure, you’ve got a dodge roll, but this isn’t Enter the Gungeon so there’s no moment of invulnerability.  Diving through a ring of fire is a great way to get viciously singed.

It helps that enemy attacks and the dungeon traps are as dangerous to the monsters as they are to you, though.  Luring a charging troll/lizard into a corridor of spikes is just as effective as piling arrows into it, and the weird puffy things that explode in a barrage of spikes do nice things to any enemy caught in their radius of fire.  Just because all you’ve got is a bow and arrow doesn’t mean there aren’t a good number of ways to take out the monstrous horde.

While the Mana Spark demo is obviously early, with plenty of placeholder art like the health bar and text, the basics it’s going to grow from are working together incredibly well.  The enemies are strong enough to be a threat but not overwhelmingly so, and it’s just fun to watch when they work together to hunt you down.  The single attack of bow and arrow seems like it would be limiting but each run sees it evolve in a different way, depending on what powerups you find and buy, so you’re constantly adapting to its new strengths.  There’s a surprising amount of gameplay in the short little demo, and it’s going to kill you more than a few times before you take out its final boss.  Head on over to the Greenlight page to give Mana Spark a little support and play one of the more promising roguelikes to come along in a while.