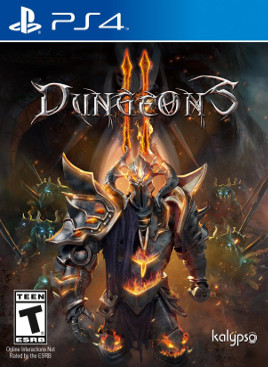 One of the occupational hazards of being an evil dungeon overlord is the constant breaking and entering done by do gooders.  They seem to enjoy killing your minions for experience points and looting all your treasure, saying it is for some noble endeavor like saving the world or some such nonsense, but it gets really annoying.  Thus the plight of Dungeons II‘s protagonist, or would he be antagonist since he is evil?  At any rate, the persona the player controls, the Ultimate Evil, or at least that is what he is called until we find someone more evil and he gets demoted to the Penultimate Evil, is tired of these self proclaimed heroes invading his dungeon and making a mess of his crib.  He sets off on a quest to rid the world of good and carries out his objective through his subterranean command center.

Dungeons 2 suffers from a mild identity crisis. It cannot seem to fully commit to being a real time strategy game or a dungeon keeper.  It excels at neither but does a pretty good job at both.  The end result is something that is more enjoyed than either type at this level, but there is a steep learning curve that needs to be surpassed before the real enjoyment begins.  The learning curve is not steep because the game is excessively complicated, it is in fact fairly simple once you get the hang of it.  The difficulty comes from a counter intuitive interface and unclear direction from the otherwise entertaining British narrator.

Early on the narrator gives instructions on tasks that need to accomplished, such as building a production facility or researching how to build a trap, which is when I got my first taste of frustration-induced rage.  The appropriate structure is built in the tinkerer’s room, the gold and resources have been spent on what needs to be researched, but the objective would not get cleared.  It was through process of trial and error after more time passed than should have that a goblin was sent in to carry out the research, which was shown by his head over an icon that was slowly filling in with clockwise moving shade.  During the process the goblin chose to leave on his own volition and he needed to be redirected to finish the job.  This standard procedure through most of the game, though in something not unlike Stockholm Syndrome once I accepted this is how the game functions it did become more enjoyable. 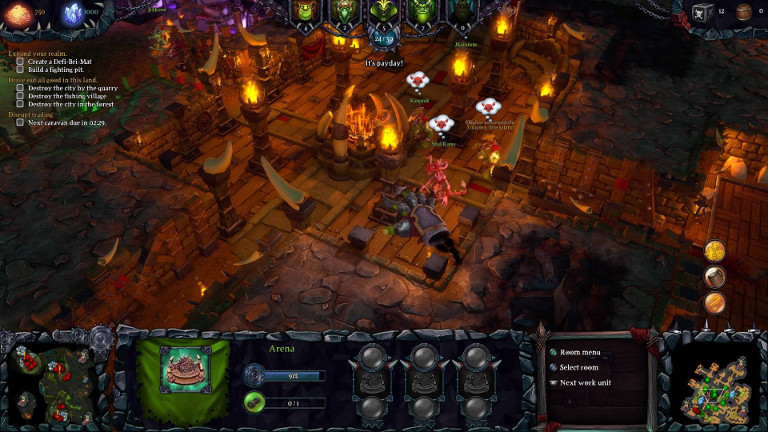 The game is divided into a couple different areas.  There is the dungeon, which is the base of all operations.  This is where minions are hired, gold is mined and spent on all the various structures that are to built and hiring of the troops.  These include hospitals, training arenas, mana crystal shrines, and tinkerer’s rooms to name a few.  Occasionally when clearing open new paths a nest of giant spiders may be discovered or some small band of heroes wanders into the dungeon that needs to be dispatched, but for the most part the dungeon is a bit of a chill zone where the time can be spent building up the ideal army.  Oh, portals that usher in demons sometimes inconvenience this, but no one said being a dungeon master is an easy gig.

Multitasking is the art of failing at multiple things simultaneously, and that being able to multitask is a prerequisite for success with this game.  Both above and underground activities happen in real time concurrently, so during the conquest of a village under the evil day star, the underground dungeon still needs to keep its operations running and is subject to attack from the various groups that enjoy invading your dungeon and mucking things up.  Switching between above and below ground is as easy as pressing a directional button on the controller.  Normally things are not at too frantic of a pace to keep up with, but if all the forces are on the offensive above ground this is a great opportunity for the heroic forces to destroy the throne, resulting in defeat. 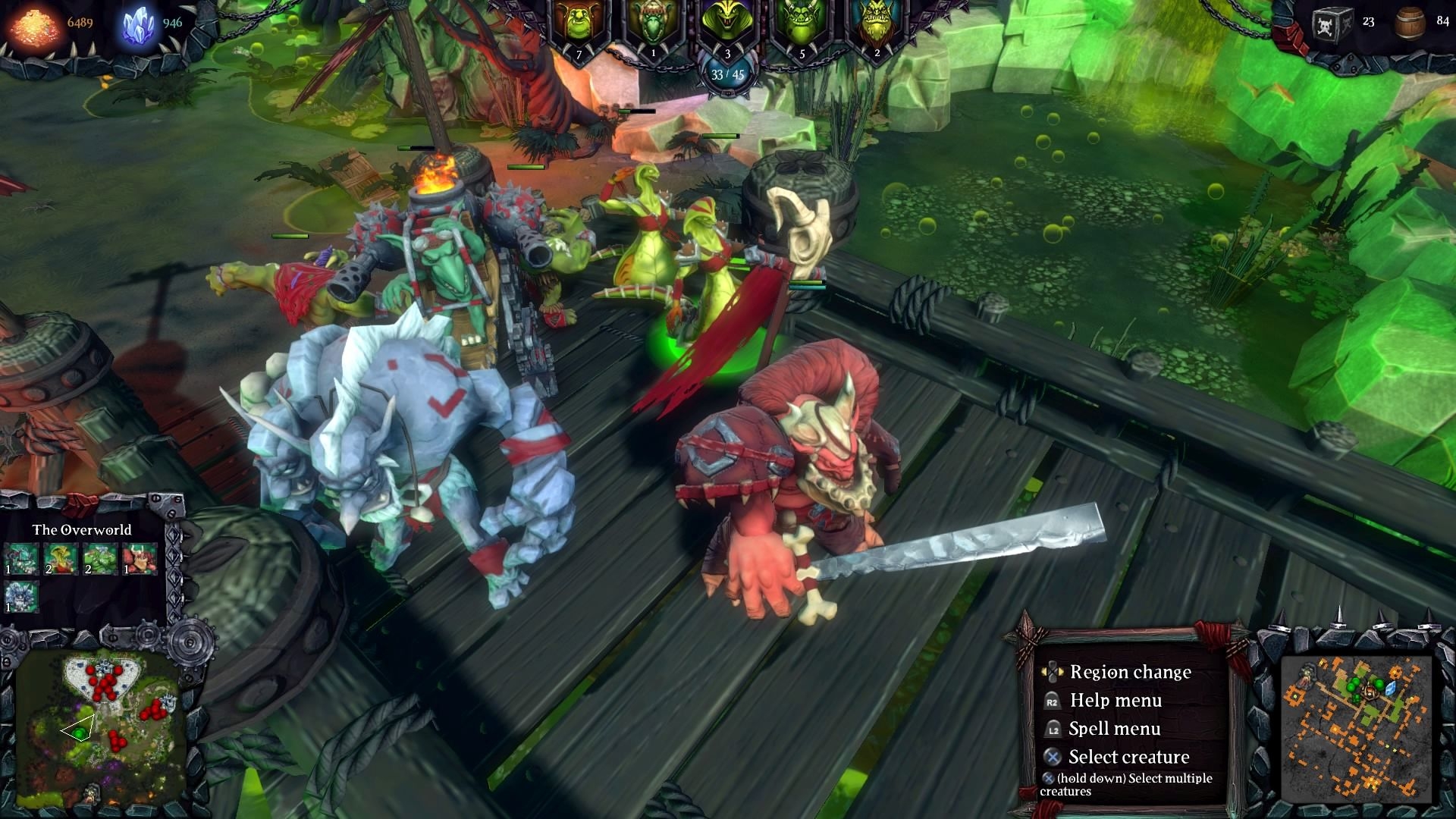 Inside the dungeon the player controls the Hand of Doom.  This hand directs where all construction and mining happens, as well as takes a hand on approach to directing the minions (groan).  Sometimes the minions need a good slap, and other times they need to be picked up and flung out of the dungeon or dropped to a point where you want them to do something.  The minions do not always complete the task they are assigned right away or wander off before the task is completed. Perhaps no one should be surprised since orcs, goblins, and snots are not known for their intelligence, and a simple pick and drop to where they are supposed to be usually properly redirects.  Not only are they defying the Ultimate Evil, but they are also being paid for their services.  Good help is hard to find when you’re evil.

The above ground portion is where most of the action takes place.  Whether is it taking revenge on good hearted kings or ushering a unicorn to its grave, most of the excitement happens above ground.  Most combat is relatively straight forward.  Guide your band of monsters to whatever you want to make dead and watch the slug fest occur between the two factions.  The only really useful spell is battle cry which slightly increased the damage the forces of evil can dish out.  There are numerous other spells that can be learned, but most of them can only be used in the dungeon making them useless for most of the above ground battles.  There is a spell to teleport the corpses of your fallen forces underground to be healed, but outside of buffing your angry mob magic plays a small role in the conquest of the above ground dwellers where it seems like it would be most useful. 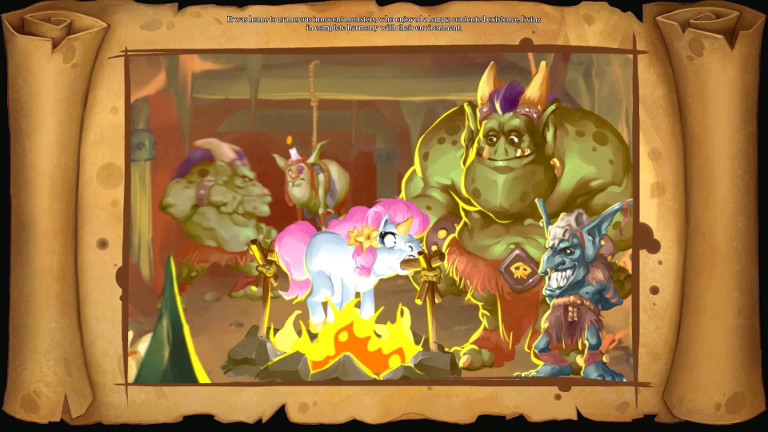 The British narrator attempts to provide some guidance and comic relief to the game.  References to fantasy series such as The Lord of the Rings and Game of Thrones did provide amusement during my playthrough, specifically “Roses are red, (season one GoT spoiler) is dead.”  He can, however, become a tad annoying during attempts to build and strengthen and army while putting the main quest objectives on the back burner.  On flip side, being called the Lazy Evil and Procrastinating Evil are amusing the first couple times they are said.  Personally I thought it was one of the game’s more endearing aspects but can see how his constant chatter can grate the nerves of some people.

This is a port of a 2015 PC game and feels like it was designed for mouse and keyboard, but the developers were able to make the PS4 controller feel natural as a tool for giving out orders to the hired evil minions.  Loading times between levels and at start up are painfully slow, but the positive side to the that is after that they are absent from the actual gameplay, save for the randomly occurring autosave.  The only shortcoming the visuals have is since this was originally designed for a computer a couple feet from the player’s face compared to a television across the room the in game text can be difficult to read sometimes, especially if played on a TV that is not of the 70 inch variety.  Otherwise the visuals are on par with what one would expect from a PS4 with a whimsical art style.  My fiancee and myself both liked the soundtrack; she even gave it favorable comparisons to the Harry Potter movies.

Being aware that this is a year-old game, there is added value to this particular version to incite people who missed it the first time around or to give an incentive to people who played the PC version to return to the endeavor of ridding the world of good.  Included with the main game are the Pixieville, Morningwood, A Chance of Dragons, A Song of Sand and Fire, and A Clash of Pumpkins expansion packs.  There is also a competitive online multiplayer component that can support up to four players.  For those who enjoy taking on the role of the Ultimate Evil, there is enough included in this version to keep you busy for quite some time. 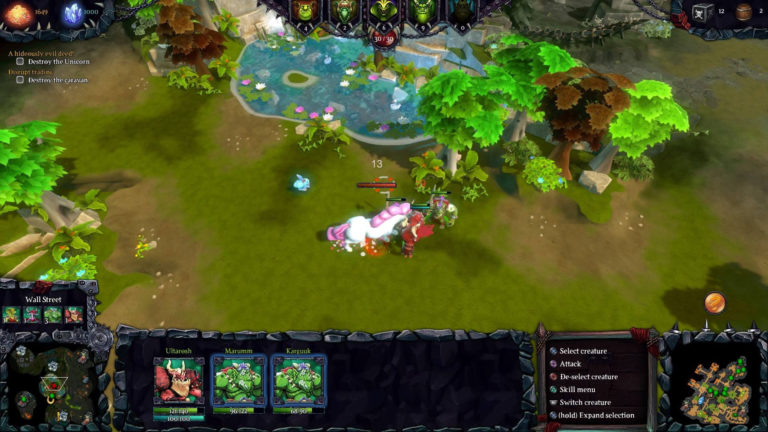 Dungeons II took over an hour to convince me that it was a game worth playing, but it was fun once I crossed that initial hurdle. Most of the frustration stems from being told to do something and not told how, with the interface’s design not making it any easier to figure out.  This is not in reference to what should be a puzzle, this is in regards to instructing a unit to build something.  The combat is simple and the strategy in building an unstoppable army is straightforward, the limit on how powerful the evil dungeon becomes is determined by how much time you wish to spend mining gold and building things.  The RTS layout is simple but this can make it more accessible to players who are not masters of that genre.  It some ways this game is reminiscent of the Warcraft franchise before it became an MMORPG.  Even with its flaws, it’s fun once you get acclimated to it.  Despite not excelling at any single thing, the combined dungeon keeper with RTS approach does result in an interesting game that can be enjoyable once some time has been spent with it.