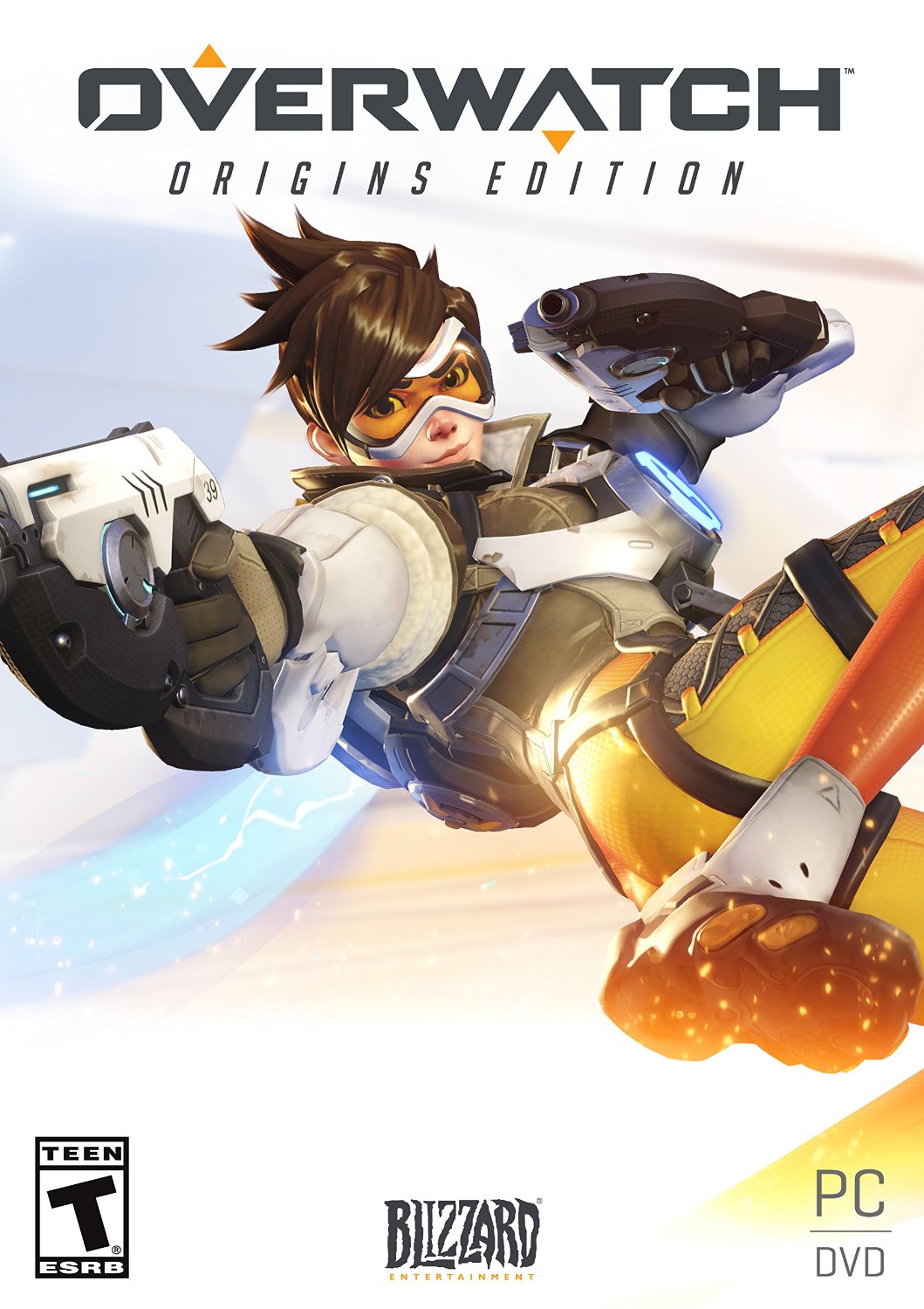 Blizzard Entertainment shocked the industry back in 2014 when it announced that its next MMO, Titan, was canceled and that they would instead be developing a brand new IP in a genre they had never developed for. That game is Overwatch, a team-based multiplayer-only first-person shooter. Overwatch stands out as not only Blizzard’s first foray into the first-person shooter market, but also as Blizzard’s first brand new IP in over seventeen years. Has Blizzard crafted a masterful entry into the genre, or is this one giant mistake?

Overwatch doesn’t have a plot, but it does have a ton of character. Overwatch’s cast of quirky characters are interesting and diverse with unique personalities. Junkrat is a limping psychopath who wants to blow things up. Winston is a scholarly gorilla who, when provoked, dips into his rage-filled primal instincts. Tracer, the spunky Brit who serves as the game’s mascot, is full of little quips as she zips around the battlefield. Players who take the extra time to stop and admire the different map’s scenery will learn even more about the different character’s backstories. Cues, like a D.Va poster, provide clues into a character’s history prior to the game. It’s an interesting way to convey lore, but it’s never quite enough. Blizzard clearly wants Overwatch to be a big franchise with an interesting lore and they do provide that outside of the game. Much like Destiny’s Grimoire Cards, players will need to turn to sources outside the main game to learn about the lore. For example, without the animated shorts, I never would have known Hanzo and Genji were brothers. Blizzard also plans to release digital comics and graphic novels to further flesh out the lore. Now, Overwatch may not need a campaign, but it would have been nice to have some access to story content in the main game.

The lack of strong story elements doesn’t overshadow what the game does do well: gameplay and map design. The 21 characters aren’t just diverse in their personalities, but also in their different abilities. Each character has two unique abilities that are assigned to the bumpers on Xbox One, R1 and L1 on PS4, and Shift and E on PC. A few characters, like Widowmaker and Soldier 76, have a third special ability assigned to LT/L2/RMB. Widowmaker can ADS her sniper, and Soldier 76 can use his assault rifle’s grenade launcher. Overwatch looks deceptively simple from the outside, but mechanically has a large amount of depth. 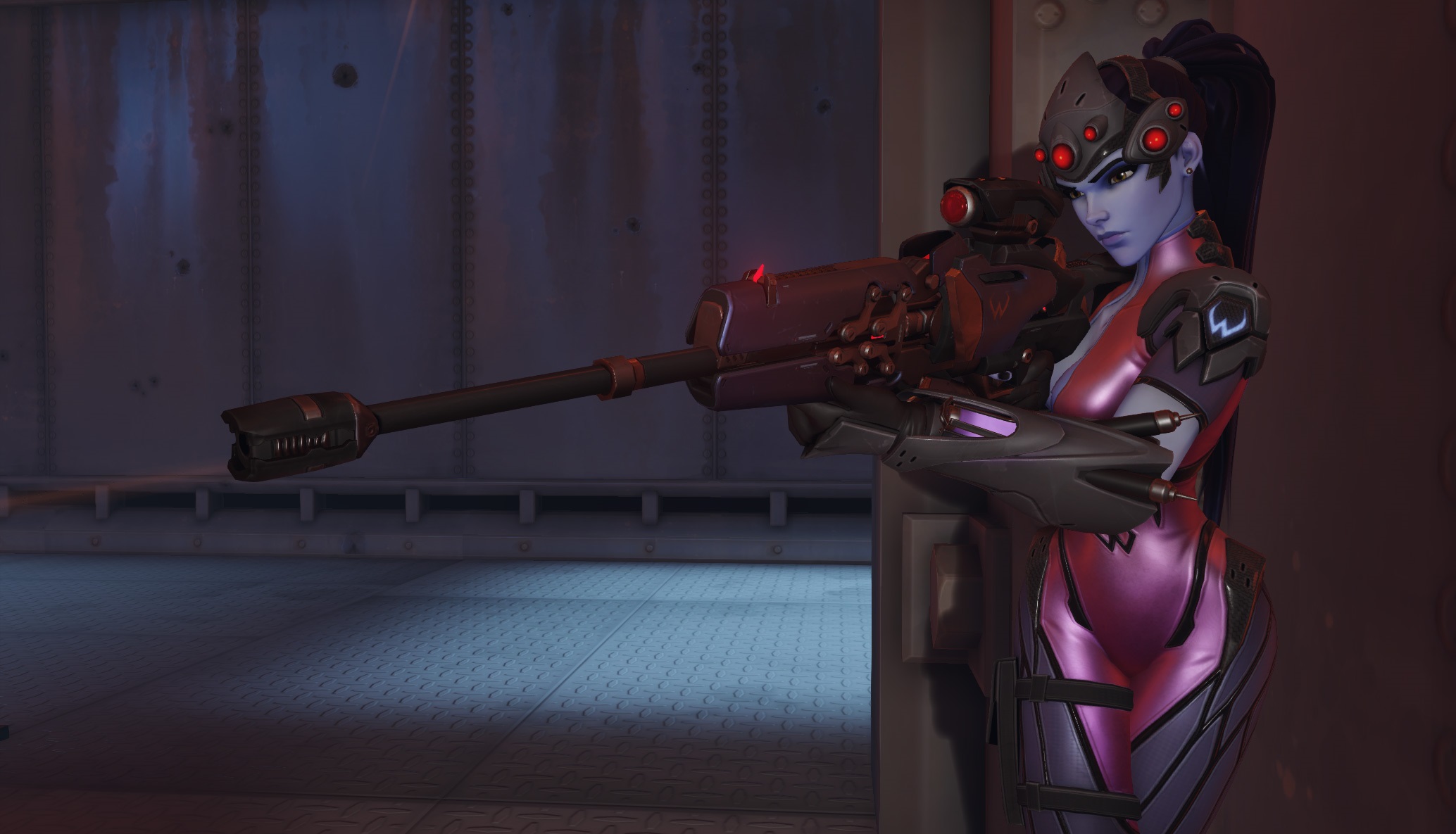 The 21 characters are grouped together in 1 of 4 classes: Offense, Defense, Tank and Support. Though characters may share a class, each plays completely different from one another. For example, Soldier 76 and Tracer are both part of the Offense class, but each has its own unique strengths and weaknesses. Soldier 76 players like a traditional Assault character from a Battlefield game. He deals good damage at mid-range and can even drop a healing beacon, but he doesn’t have a lot of health. Tracer, on the other hand, has small clip-sizes and low health but is fast and able to rewind time to pull herself to safety. There aren’t two characters that are similar, and there isn’t a single character that is a perfect “all-around” character. Everyone has their own strengths and weaknesses, and learning how to play to those strengths and exploit enemy weaknesses is all part of the game’s meta.

It isn’t just the characters that feel unique, it’s also the maps. Overwatch ships with twelve maps, three dedicated to each of the four game modes. All twelve maps are based on real-world locations and match their settings wonderfully. Route 66 is as much a desert as the real world locale, Hanamura is a beautiful Japanese castle, and the Temple of Anubis takes players to the Giza Plateau and its mighty pyramids. These are not only aesthetically pleasing maps, but also very well designed maps. 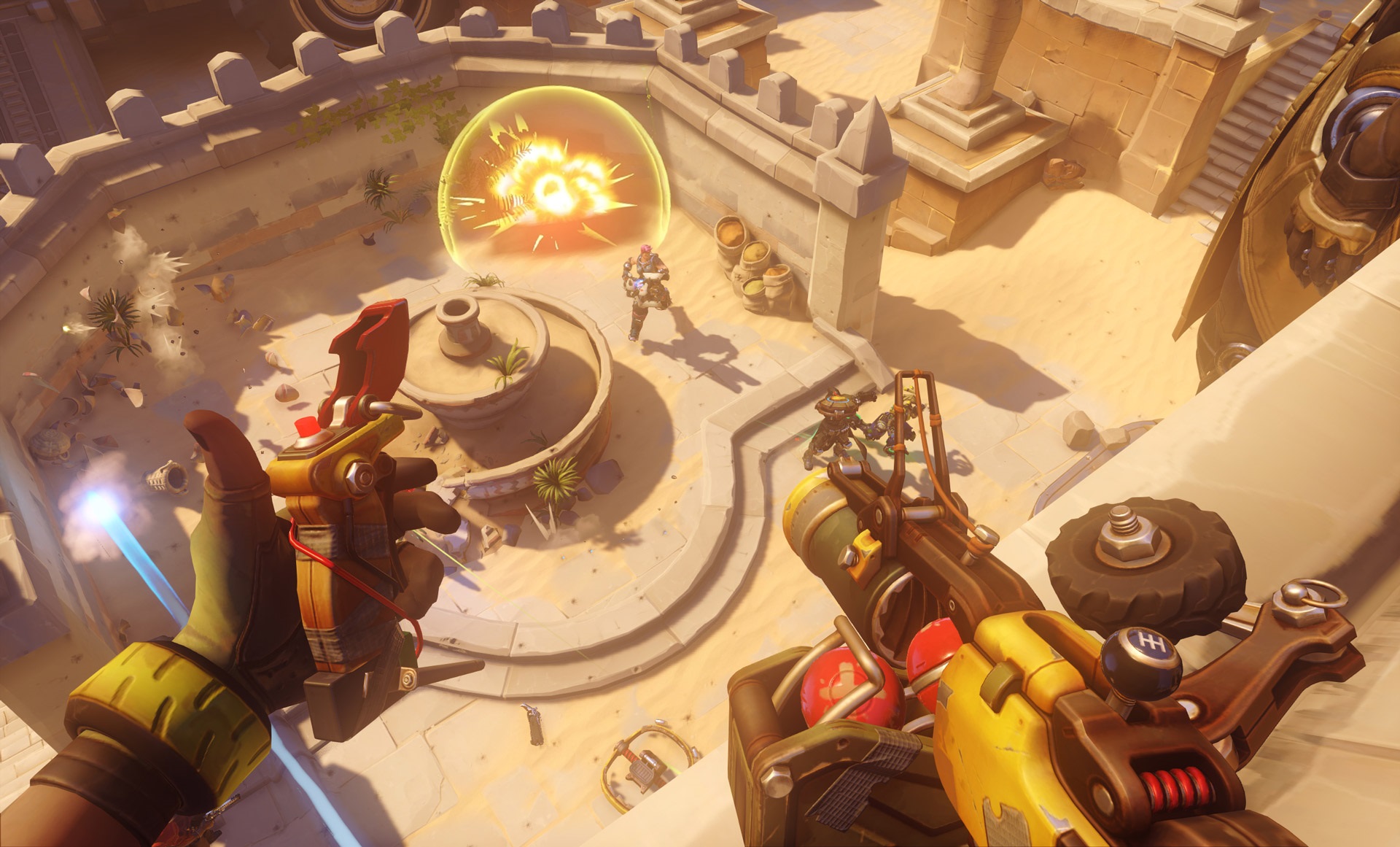 Each map was designed specifically for the game mode it’s paired with, meaning nothing feels wrong about the design. An Escort map is designed with one straight path and a few off-shoot areas to accommodate different playstyles. A control map features one central point and multiple paths players can take to try and flank the enemy team and take the spot. These maps also play into the game’s meta. For example, a close-quarters Escort map will benefit Reinhardt whose shield would block everything straight in front of him, but an open control map would leave him vulnerable from many different directions. Being able to control the map with the right hero, managing choke points and figuring out the path that works best with your character’s range is imperative.

Overwatch does its best to avoid the pitfalls of other multiplayer-only games, mainly content. Overwatch’s 21 characters provide plenty of variety and the 12 uniquely designed maps will keep players interested for matches on end. Where Overwatch’s content falls flat is in its game modes. There are only four and one of them is merely a hybrid of two other modes. Assault tasks attackers with capturing two consecutive points on the map, Escort is about leading a package through a set number of checkpoints to a final delivery point and Control is King-of-the-Hill. Assault/Escort is a blend of the first two modes where attackers capture a point and then escort a payload. The game modes are perfectly fine, but they can get tiresome after a while. Why there couldn’t be a Team Deathmatch or Domination/Conquest mode is curious. While Blizzard has said they will be adding more heroes and maps post-launch, they have no confirmed if there will be any new game modes outside of Competitive Play mode. New maps and characters are nice, but it’s the lack of game modes that is Overwatch’s big variety problem right now. 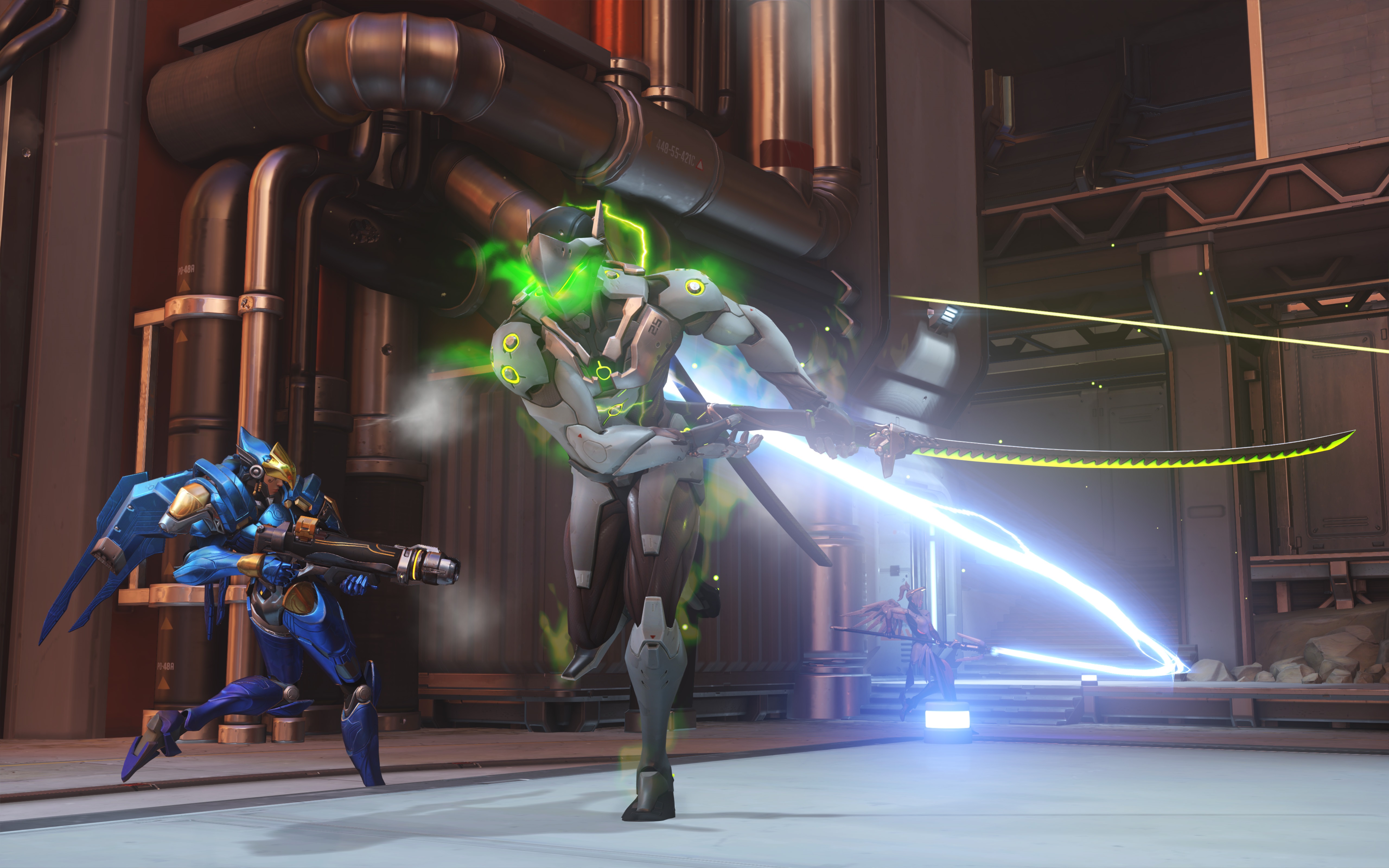 Speaking of new content, Blizzard will be releasing all post-launch content for free. To do this, they implemented an RNG loot system with microtransactions. Loot Boxes are earned regularly through leveling up and an infinite level cap ensures that players can continue collecting Loot Boxes forever. Unfortunately, the RNG system stumbles when it comes time to collecting the goodies. Much like a Call of Duty: Black Ops III Supply Drop, an Overwatch Loot Box contains a lot of unwanted items. Character skins, emotes and character poses are the coolest of the drops, while Sprays and Lines of Dialogue are the lamest. Players have no control over what they get and it can be frustrating to keep getting items for characters you don’t even use.

There is a way to get the content you want: Overwatch Gold. Overwatch once again stumbles over itself, though, as Gold isn’t earned from playing well or as a microtransaction, but as a random drop from Loot Boxes or burning duplicates. For a game that relies so much on rewarding players for mastering their favorite characters, it doesn’t really give them many ways to unlock the content for the characters they like. 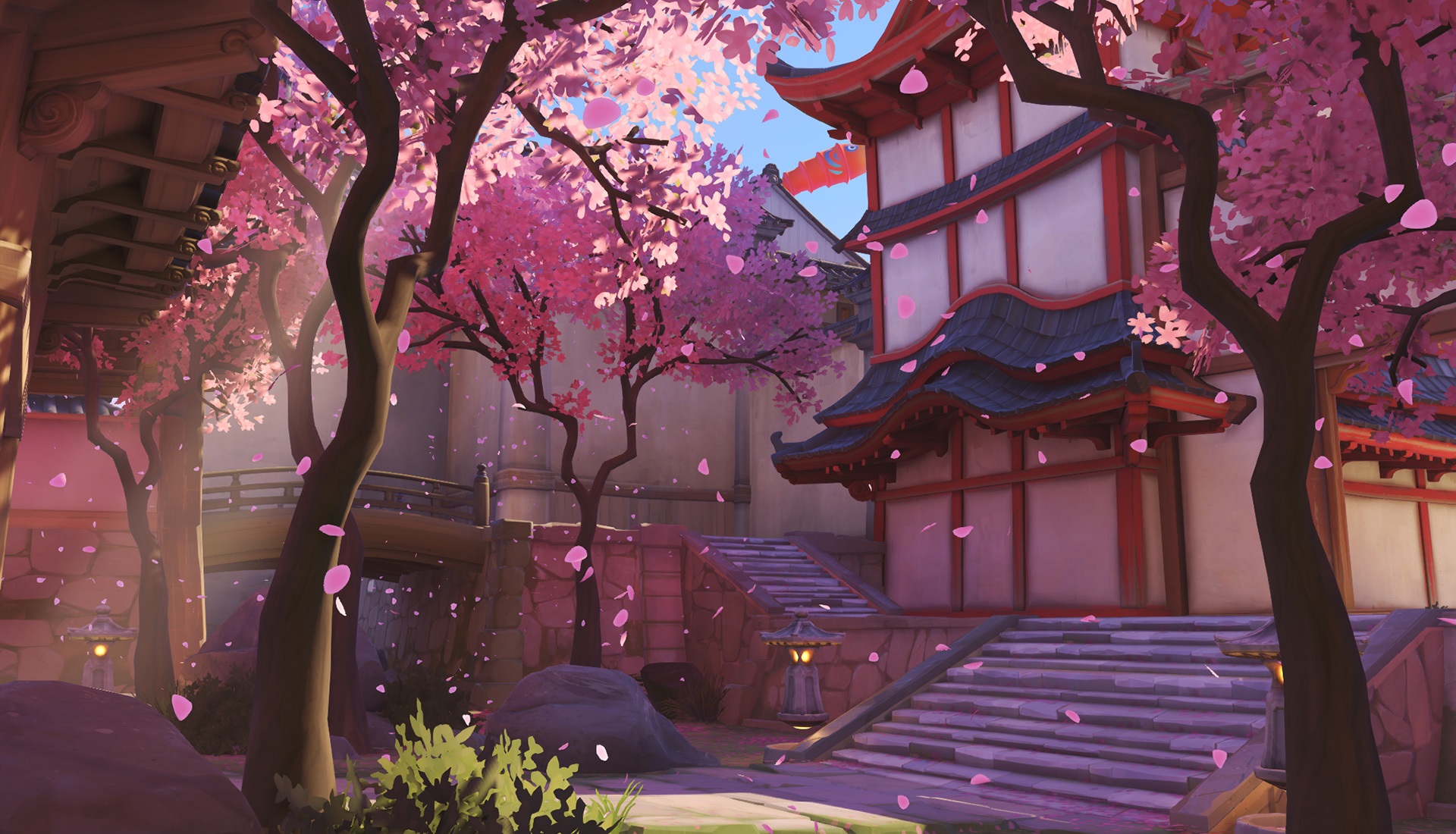 It’s really that feeling of working as part of a team, mastering the characters and controlling the map that makes Overwatch such a joy to play, even without getting the content you want for your favorite character. In one match, my team and I made a last defense on a capture map. Our Bastion entered turret mode to spray one entry point, and Reinhardt held up his shield at another with Zarya close behind, supplying him with a personal shield. Soldier 76 sprinted to the front to deal heavy damage with Mercy flying behind providing a damage boose. All the while, a Widowmaker hid at the very back, ready to snipe enemies that somehow made it past our defenses. In a world filled with so many “go-it-alone” multiplayer shooters, having a game like Overwatch that offers so many unique ways to play as a team is refreshing and fun.

In terms of visuals, Overwatch is technically fine. It isn’t pushing any graphical boundaries, but it looks good enough and gets the job done. Overwatch features a colorful palette with crisp visuals that is aesthetically appealing and really shines on maps like Hanamura. What is important is that Overwatch maintains a solid 60 frames-per-second, which is good considering it is a fast-paced shooter. The rest of Overwatch’s presentation is  solid. The few spoken lines of dialogue are voiced well and many are genuinely funny. Nothing here is as grandiose as Starcraft 2 or Diablo III, but considering Overwatch doesn’t have a huge campaign, it’s perfectly understandable. 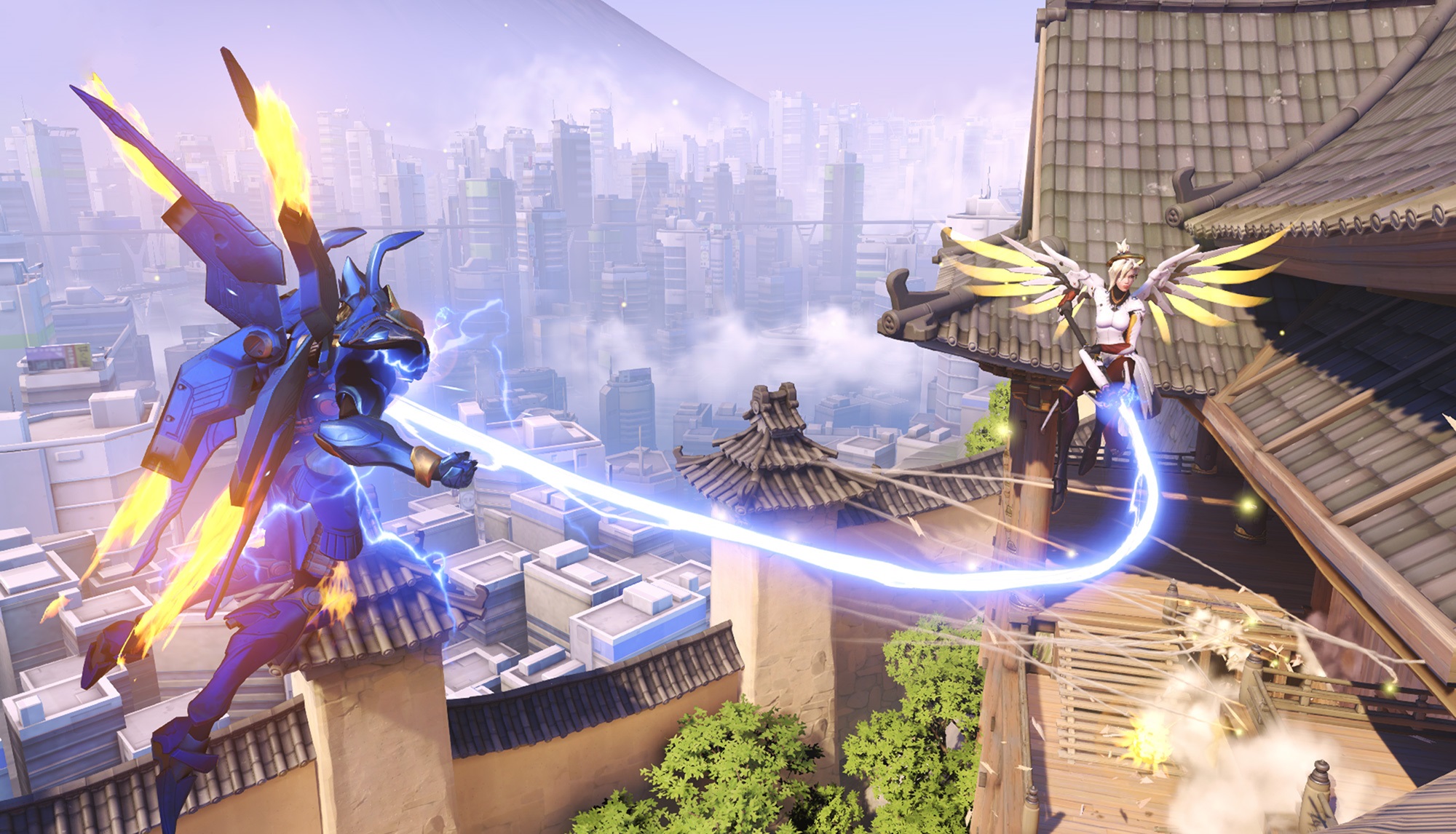 Blizzard has perfected the RTS and now they’ve laid a fantastic foundation for the FPS. Though simple on the surface, Overwatch manages to create depth thanks to its 21 character roster and 12 intricately designed maps, consistently rewarding players that master their characters, learn the maps and work as a team. Putting a competent team together and snatching victory from the jaws of defeat is one of the most satisfying experiences a multiplayer game has offered in years. It could use a campaign, a few more game modes and refinement of its RNG system, but none of that distracts from the fact that Overwatch is an superb effort that will entertain players for an ungodly amount of time.