When video games first crawled out of the primordial sludge, they were much simpler forms of entertainment than we have been spoiled with today.  There were no fully rendered 3D worlds, full motion CGI video cutscenes, Hollywood stars providing voice work or licensed soundtracks from popular musical acts.  They succeeded or failed solely on whether or not the experience the limited number of pixels could provide was worthwhile.

Downwell succeeds at recreating this type of gaming experience.  Despite being released in 2015, it looks and plays like a coinivorous machine out of 1980s.  The gameplay is simple enough, jump and shoot your way down the world’s deepest well.  Since we are discussing a video game, tradition dictates that the player will be killing whatever creatures are encountered on the journey, whether they be a turtle, bat or giant floating amoeba.

Like the arcade cabinets that were popular in decades past, the challenge lies in mastering the otherwise simple game mechanics.  The action is fast paced because no one falls down a well in slow motion.  The assorted denizens of the well all want to kill you, and even though the gunboots do not inhibit jumping, they apparently weigh down the character’s legs too much to shoot in any direction besides straight down.  Death is a common occurrence in the descent to the bottom of the well, but that is part of the fun. 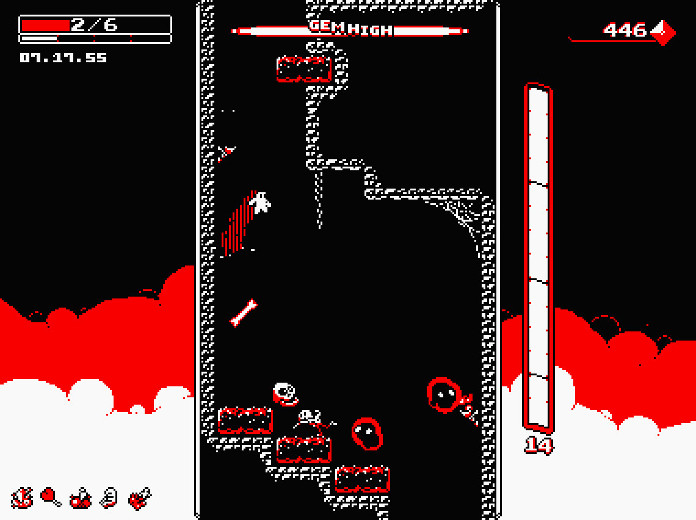 Downwell captures the essence of what made these old games fun, which is addictive and challenging gameplay.  This is the type of game where “one more try” easily becomes several dozen and it’s suddenly three hours before the alarm clock for work or school is set to go off.  You lie and say you were up late closing down the bar, preferring to have people think you are hungover instead of just staying up all night with a video game.  But deep down, you know Downwell was more enjoyable than drinking all night, and you’d gladly do it again.  Totally worth it.

A rarely discussed element of gaming that is lost in the modern storytelling used in games is the element of having to use one’s own imagination to fill in the blanks of what is happening in the game.  Current narrative devices in games are great, and there are plenty of games I primarily play for the story.  But in the old days things were not quite like this.  If I wanted to go to an arcade to play games more advanced than what was at home, I had to walk twenty miles in the 110 degree heat through five feet of snow uphill each way.  The payoff was fun games were available, but we were lucky if we got five sentences written on the arcade cabinet to give us an idea of what the game was about.  This is where our brains could get into some real Calvin and Hobbes territory.

It is simply not enough to go down the well and kill everything to death, but we need to know why we are going down the well to kill everything to death.  Maybe it is reflective of some existential crisis we are experiencing that we project onto our pixelated hero.  Perhaps we go through so many meaningless actions in real life we need to find meaning in the actions of said pixelated hero.  Maybe it is a sign of the game simply not providing enough mental stimulus.  In any event, purpose is needed for the mission at hand in these games, and since Downwell’s introduction is simply jumping down a well and shooting, my brain started working quickly at giving purpose to this bizarre endeavor.  And that purpose to kill every last tyrannosauras rex piloting an F-14. 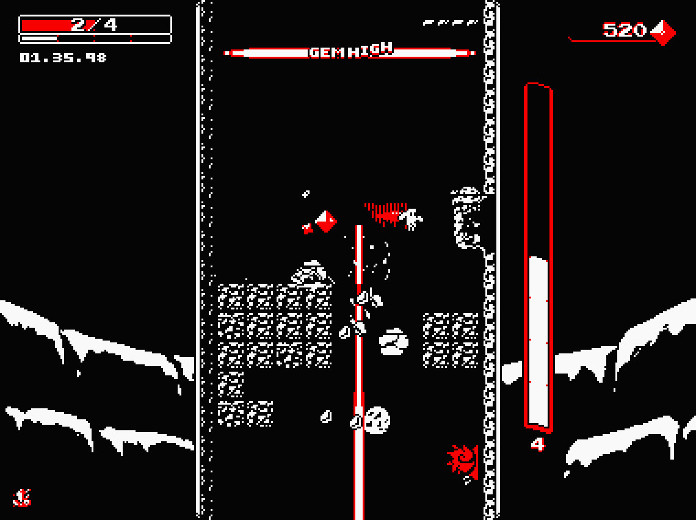 Wait, no, that’s a different game.  The F-14 tyrannosauras has no place in Downwell, at least not in any point that I made it to.  I haven’t actually made it to the end of the game yet.  My story for Downwell draws inspiration from a couple different classic television programs, and creates what I think would be a standout episode for either show.  The background story is about a young boy named Timmy O’Toole who fell down a well.  After his faithful border collie alerted recording artist Sting to his plight, Sting united the town to send all their love down the well to rescue Timmy who was trapped halfway to hell.  The boy was saved, and his dog was declared a hero since when she barked everyone somehow knew that she was saying Timmy fell down the well.  But that is just the beginning of our story.

Timmy suffered from a severe case of post traumatic stress disorder from the time he spent at the bottom of the well.  While the townspeople mistook some noise they heard from the well for Timmy reverting to a feral state, the truth was the inhuman denizens of the well were terrorizing him.  The emotional trauma Timmy suffered from this was too great to bear, and instead of seeking the therapy he so desperately needed to heal those scars he turned to the bottle to quiet the echoes of the screaming monsters that haunted him.  After years of drifting from town to town, unable to hold down employment or form meaningful relationships, Timmy decides he is finally going to do something to silence his demons.

Timmy straps on his trusty gunboots, because those are actually things in his world, and returns to the well, and this time he ain’t having any love sent down that well.  He returned to kick ass and chew bubble gum, and he is fresh out of bubblegum.  He seeks vengeance.  He needs closure over that part of his life, and the only way to do so is to take revenge on the well.  This time it’s personal. 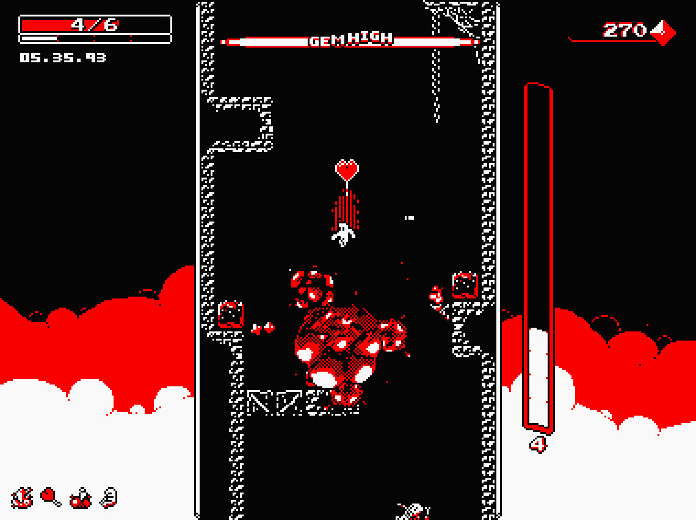 Timmy hates his life and what his time in the well did to him.  He hates the constant fear he lives in.  He hates the chain of unsatisfactory life events that he experiences every day since Sting and Lassie saved him from the well.  He is going to make this near dry well overflow with the blood of its inhabitants.  He may not be able to actually kill the well itself, but it won’t be for lack of trying.

Instead of a simple old school arcade game where the objective is to rack up as many gems and descend as far as I can, Downwell is now a mission of a personal vendetta.  It is the tale of a broken man trying to set right a great wrong that happened to him when he was a young child.  A part of Timmy was left at the bottom of the well, and his mission is to shoot his way to the bottom and retrieve it.  Until he succeeds in his mission, he will never be whole again.