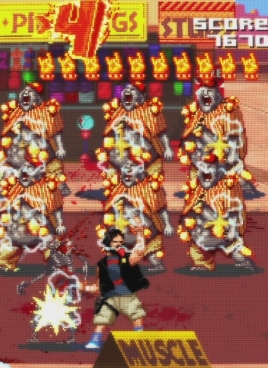 In the late ’80s and early ’90s, beat-em-ups were among the most popular genres in all of gaming. They were arcade dream games with some having up to 6-player support to gather that many more quarters from kids all across the world – and home entries were plentiful. Some were rather mediocre, like home conversions of Captain America and the Avengers, while others were amazing. Final Fight may have had a flawed port, but it was still a good-looking game that played really well — it just wasn’t as good as the arcade original. The rise of Street Fighter II and the lack of evolution of the genre pretty much ended the side-scrolling beat-em-up as a popular genre though, and since then, games have been few and far between.

With retro-inspired games being more popular now, however, we have seen modern-day franchises infuse older game themes into them to appeal to a broader audience. Saints Row IV did this with Saints of Rage — a one level homage to Sega’s Streets of Rage franchise — and the recent Kung Fury movie did something similar with Kung Fury: Street Rage. While the movie itself was a giant love letter to the era of Miami Vice and CRT TVs, its video game adaptation took cues from beat-em-ups and mixed them up with One Finger Death Punch. Dead Island being all about killing a whole bunch of things makes its concept fit the genre perfectly. Is Retro Revenge strong enough to stand on its own or is it going to be crushed under the weight of history? Normal beat-em-ups had you try to save a damsel in distress — now, you’re out to save a kidnapped cat.

Early videos for Retro Revenge showed off a basic belt scroller, while the end game more closely resembles the Kung Fury:Street Rage game – but with some fairly big improvements. It still auto-scrolls, but you have a wider variety of attacks to use. Punching, kicking, and low-kicking all destroy enemies. However, like a rhythm game, you’ll also want to time your shots within a button-shaped marker that lets you know when you’ll land a perfect strike. These greatly increase your score, and that allows you to up your end-of-level star count. One shows that you beat the stage, while five shows that you mastered it. 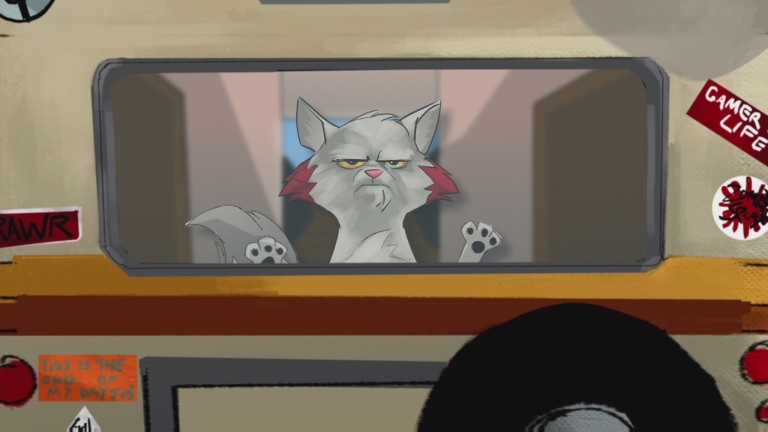 There’s more to do here than in more simplistic modern-day brawlers, as you can change lanes to either chain attacks or avoid damage — or sometimes, both. You can also use a limited-time super weapon and a single-use magic attack that will clear the screen of all sorts of baddies. If you have a screen full of exploding blobs, then you’ll want to save your limited-use items for them. You can also find a longer-term version of a weapon on a stage if you attack it in its lane — and you’ll have an absolute blast slicing up enemies with a weedwhacker or smashing them with a sledgehammer ala Donkey Kong. The violence is dished out at a frequent pace, but never gets to the same gross-out levels of the mainline games.

While the controls and core game are very easy to pick up and play, they can be tricky to master when you really want to show off the game’s mechanics. Landing non-stop combos are a challenge, as is getting through a stage without getting hit. If you get to your mid-level refill without damage, you’ll get a huge score boost — and with only three hits per life, you’ll want to play carefully. Dying results in you having to restart a stage, and while they’re only going to take a few minutes to get through, that time can add up very quickly when it comes to replaying a level over and over. 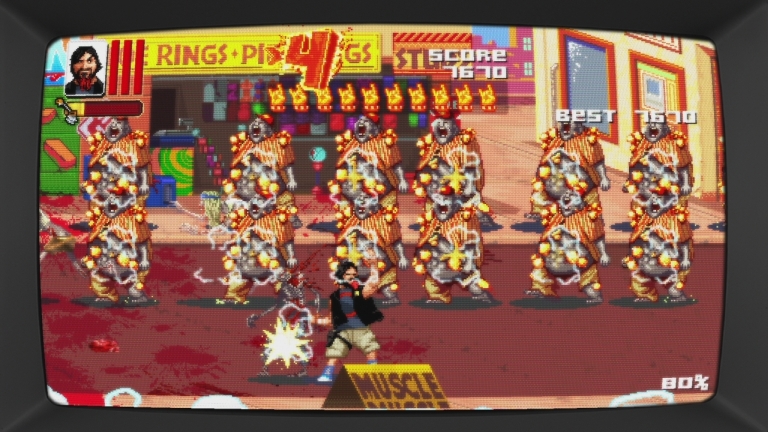 Beating a stage is a lot of fun — even if there isn’t a lot of meat on the game’s bones. You’ll generally always just alternate between the face button attacks, use the special and magic when needed and simply move from locale to locale with different enemies to slaughter. The formula doesn’t change up much, but it’s a fun formula and makes this game a fine way to spend some time. The controls are responsive and having a rhythm-style timing mechanic forces you to pay attention more than you might think you would have to. You can’t simply go through a stage bashing buttons and win — you have to do carefully hit the right button at the right time land the perfect strike for that scenario.

Every attack has its own set of animation frames, and the animation itself is generally smooth. Beat-em-ups were never known for having smooth animation, but Retro Revenge features detailed animations for every attack. It’s fairly impressive and while the game’s core depth is beneath most 16-bit brawlers, at least its graphics strive to improve upon that time period in notable ways. The game has been hyped up as a return to 16-bit gaming, and exceeds that era in terms of sheer amount of things going on at once and featuring more color depth and variety than you would have back then. Backgrounds do tend to be the same for a set of stages though — leading to far more deja vu than there should be. The best beat-em-ups always mixed up your environments so that while you might be doing the same thing over and over, you were at least doing it in new areas that felt different. That doesn’t happen here, and definitely prevents it from being a top-shelf entry in the genre.

Musically, Retro Revenge’s chiptune soundtrack is enjoyable but unspectacular. It’s fun to listen to during all the chaos, but doesn’t stick with you after a play session. Similarly, the sound effects are gruesome when need be and yet a bit sillier than usual for a Dead Island game. In keeping with the tongue-in-cheek nature of everything, everything is a bit cartoony. It works for what they’re going for, but isn’t very memorable. 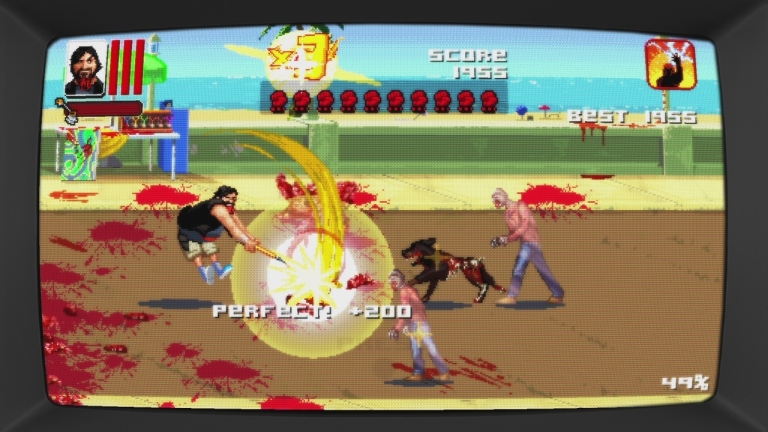 Dead Island Retro Revenge is a bit more limited than most beat-em-up fans would expect, but remains a fun time. The lane-based combat keeps the pace fast, ensuring that you’ll never go too long without something to kill. Not having many attacks at your disposal or much in the way of level variety hurts the experience, though. Déjà vu creeps into even the best brawlers, but it starts hitting this very early on and never really lets up. The concept is reasonably well-executed, but this isn’t the kind of experience that gives you a lot to sink your teeth into. Still, as a bonus thrown in with another game and made available as a super-cheap download, it is easily worth its asking price.