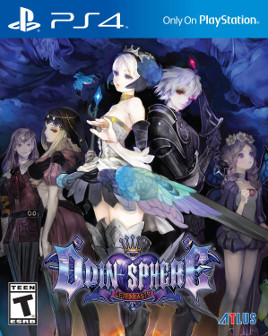 The life cycle of a game console is a curious thing.  Throughout a console’s life, developers become more familiar with the architecture of the hardware as well as technology advances in ways that allow the hardware’s potential to be more fully realized. resulting in games progressively improving.  When a comparison of a launch title is made with one of the final titles for any given system the difference is night and day.  The action RPG Odin Sphere was released toward the end of the PlayStation 2’s life cycle and as such it is arguably one of the best looking games on the system.  Its critical reception was positive, and while it was not a commercial failure by any means, the title flew under many people’s radar as they had moved on to the new and shiny PlayStation 3 and Xbox 360.

Odin Sphere has returned from Valhalla in a shiny new HD remake with the extended title of Odin Sphere Leifthrasir.  As easy as it would be to increase the resolution and slap on the HD Remake label and call it a day, Vanillaware went above and beyond in handling this re-release.  All the artwork was redrawn to take full advantage of what current generation hardware is capable of processing.  The changes do not stop at simply being cosmetic.  Environmental changes have occurred as well, such as the addition of ruined structures in the first area that allow for greater exploration.  The map system has been revamped making it easier to traverse the area.  New mid level bosses have also been added to increase the excitement in exploration of the expanded areas.  A few cutscenes are expanded, as well as some additional voice overs.   There is new music playing over the redesigned title screen.

Out of all these changes, the most notable change is how the game is actually played.  Combat mechanics feel much more fluid, as well as being quicker paced.  Naturally, these changes come in addition to battle being more stylized and flashier.  The characters have been given additional moves, and it is easy to rack up a high combo count in battle.  It caps out at 999, but there were a couple instances during the review process that number was reached and the hits continued beyond what the tally can count.  Even though this is a nine year old game, every effort was taken to ensure that it feels at home and contemporary on the current console generation. 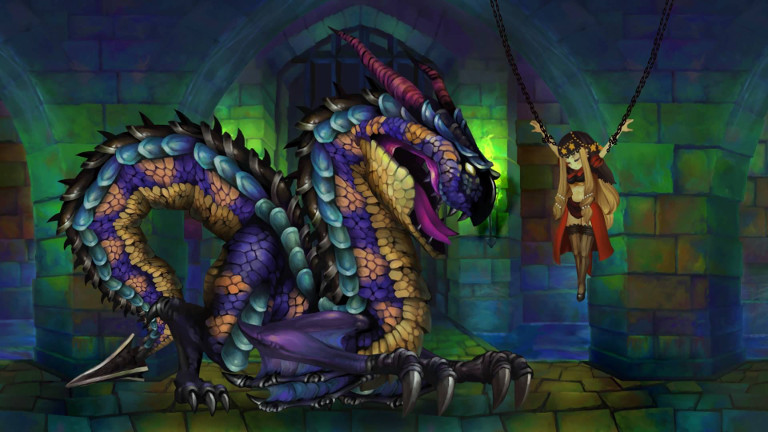 As is the case with remakes, there is no doubt that there is a group of purists who read the previous paragraph and cringed at the George Lucasification their beloved Odin Sphere has been violated with.  Vanillaware understands that while the changes will be considered by the majority to be improvements, there is bound to be those who feel Odin Sphere is fine just the way it is.  Well, aside from standard definition games not looking the greatest on an HD television.  For these people, as well as those who missed this in 2007 and want to see it in its original form, there is an option to play Classic Mode.  This mode is the 2007 version of Odin Sphere, save for the only difference is it features the redrawn 2016 graphics.  Whether you want a major overhaul done to the classic, or simply the classic with a face lift, this title has you covered.

Odin Sphere Leifthrasir tells the tale of five characters whose stories are intertwined.  Playable characters in later chapters make appearances throughout the game, often of an adversarial nature.  The same battles are sometimes revisited, but from the opposite side.  A criticism that could be given for this format is that can make the game seem too repetitious, but watching the story unravel by viewing events through a fresh set of eyes adds a layer of depth that more than makes up for this.  Leading the Valkyries into battle, and then in a later chapter fighting against them for your kingdom’s survival blurs the lines between good and evil, much like a very simplified Game of Thrones with much less adult content. 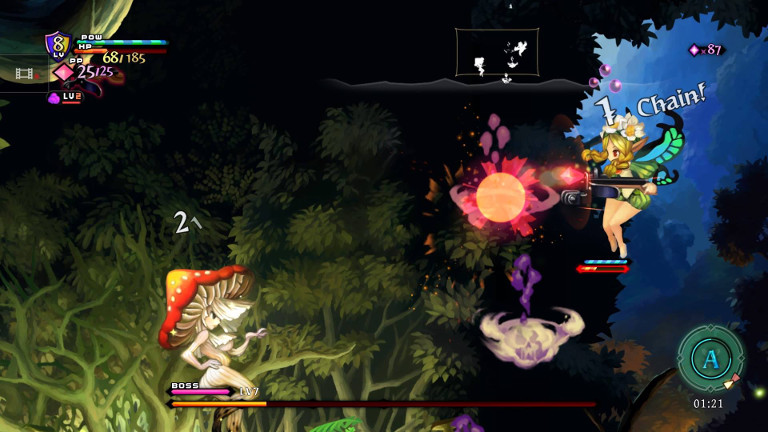 Each of the first five chapters belong to a specific character.  Each character plays differently from one another which also offsets the return to familiar territory.  To give a couple examples, Cornelius is a swordsman who plays how warriors generally play in 2D platformers.  Mercedes has a magic crossbow that behaves as if it is a magical machine shotgun.  In this case, the difference between melee and ranged combat is the secondary difference between the play styles of these characters.  Cornelius is capable of double jumping, and somewhat fudging in a triple jump with a properly times raising attack, but is otherwise limited to standard bipedal forms of transportation.  Mercedes can simply fly around and go wherever she wants.  The different perspectives on the overarching story mixed with the individual character stories as well as the wide variety of play style do make each chapter feel like a fresh experience despite covering the same ground every time.  Each character has a unique set of skills that become available when they level up or by unlocking phozon prisms.  There are more abilities than there are phozons which are required to level up every ability so it is advisable to experiment with different special abilities to see which ones are worthy of being leveled up.

A weird feature is the role that food plays.  Eating food grants experience points, health recovery, and a small increase to maximum health.  Food can be purchased, found, or grown.  Seeds can be planted but require phozons to grow.  These are the same phozons that are collected by killing enemies that are used to level up special attacks.  There never seems to be an abundance of them so managing them to balance character growth between food based experience or stronger special abilities is a decision that has to be consciously made. 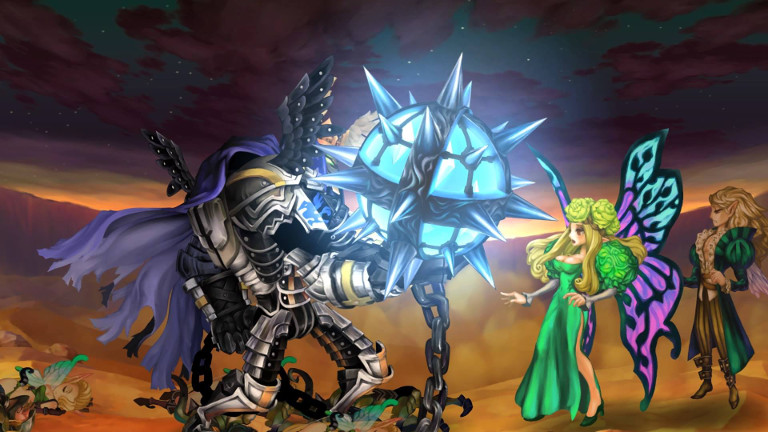 The seed system has also been revamped in this updated version.  It is now possible to plant multiple seeds at a time and shower them with stored phozons.  Incidentally, if you choose to have your character lead a vegan lifestyle this cannot be done without violence.  Carrots, turnips, onions, and other root based plants appear to be sentient lifeforms in this game and run away when pulled from the ground.  Some of them violently attack you, but a few swift hits is enough to subdue to collect them.  Also, I am not sure how this works but in the world of Erion but sheep are grown from seeds that are planted in the ground and then harvested.  Would that make sheep a vegetarian dish?

The visual quality of Odin Sphere is what made it stand out in the PlayStation 2 library.  The completely redrawn graphics combined with support for 1080P display and 60fps make it look just as impressive now as the original version did for its time.  It is simply gorgeous.  If there is any fault to be found with the graphics it is that the speech animations do not match up to spoken dialog if the English audio track is selected.  That doesn’t stop people from enjoying foreign films, and it shouldn’t interfere with anyone’s enjoyment of this. 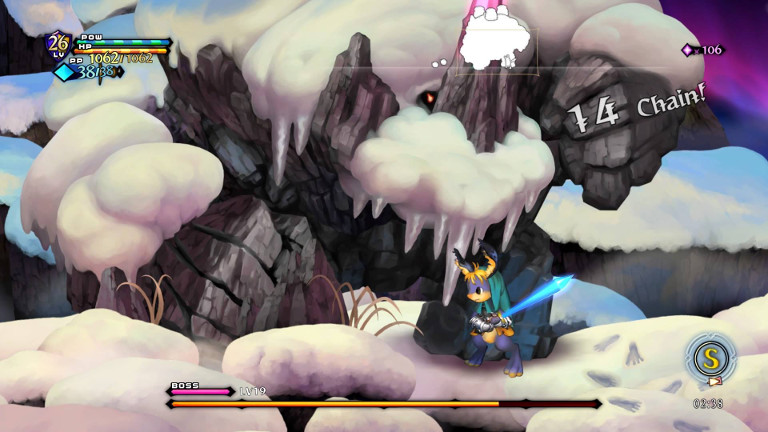 Odin Sphere Leifthrasir goes to great lengths to take an often overlooked gem from the PlayStation 2 era and make it new and relevant for the currently supported Sony consoles.  The 2D platforming controls are smooth and responsive, and the combat is fast paced and fluid.  While classified as an RPG, this has some of the better executed combat action seen in modern 2D games.  The story is well developed and the pacing over several chapters from different viewpoints give it a satisfactory level of depth.  A JRPG combined with an action platformer setup seems like a strange marriage, but this is a perfect example of how to pull off a seemingly unlikely combination. Vanillaware took an already great game, revamped it to feel more contemporary without losing any of its charm and made improvements across the board. Switching between the Refined and Classic mode make it apparent how many improvements were actually made.  And for those that think it was fine how it was, that version is also included with this release.