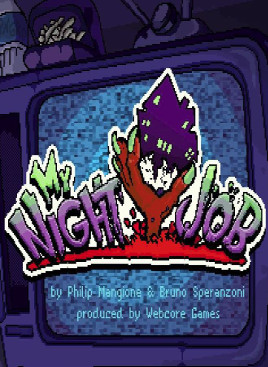 Based on scientifically gathered data that is being made up as it is typed, working second and third shift always generates more interesting stories than first shift.  The story of My Night Job begins with some dude rocking a skullet tied back into a ponytail watching what appears to be an episode of Headbanger’s Ball featuring some black metal band.  This is used to help establish that we are experiencing a work of fiction.  MTV does not play music videos and if they did they definitely would not play any black metal.  During this vegetation session, a helicopter transporting a bunch of SWAT team looking gentlemen shows up and start talking about this being a major financial opportunity for our hero, who will henceforth be referred to as Captain Skullet (not character’s real name).

Captain Skullet is whisked away in the black helicopter and dropped off at a giant mansion that is currently being overrun by zombies and jawas.  Actually, to be technical there is no Disney logo anywhere so they are unnamed robed midgets whom if there is any perceived resemblance to jawas it is purely coincidental.  There are 100 people trapped in this ginormous mansion that need to be escorted to one of several different helicopter pick up points.  Captain Skullet was blinded by the opportunity for financial gain and subsequently he accepted this mission without packing a weapon or asking for one of the SWAT dudes to lend him one of theirs.  This titanic lack of foresight is luckily without consequence, for Captain Skullet is tough enough to punch the monstrous intruders of the house to death, or second death as the case may be.  He is also able to make use of the myriad items strewn about the cavernous domicile for all of his weaponry needs.  Found objects that can be used as weapons include but are not limited to bicycles, potted plants, acoustic guitars and chainsaws.  Just about anything that is not living or bolted down can be picked up and used to crush his enemies, at least until the said item ends up breaking. 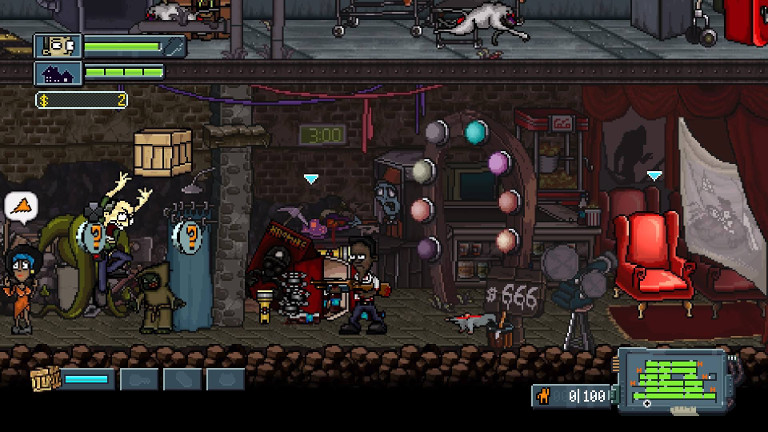 My Night Job resembles an early 1990s arcade game risen from the dead to feast on the brains of the new generation.  This is a fast paced, 2D side scrolling beat ’em up.  Captain Skullet runs through the mansion, heroically rescuing the trapped survivors and killing the inhuman inhabitants with anything he can find.  The mansion has quite the elaborate design.  Judging by the look of a few rooms, I think the owner dabbled in some mad scientist activities, which may explain the zombies and jawas.  There is not one but two of Michaelangelo’s Davids along with numerous guitars and a computer monitor that could be estimated as being five feet high and thirty feet long.  Part of the basement looks like it actually opens up as a gateway into Hell, but Hell is stuck in the 1950’s since the game turns black and white upon entry.  Some of the people that are trapped have weapons and actually can be of assistance when escorting them to the helipad.  Why someone with a loaded rifle needs to be saved by Captain Skullet brandishing a rolling pin may require a suspension of disbelief but the added fire power is nice.

In addition to keeping Captain Skullet alive, the owners of the mansion must not have had any money leftover for home owner’s insurance because saving the trapped people isn’t enough.  Captain Skullet must ensure that rooms of the mansion are not completely destroyed.  To add a level of complexity, sometimes our hero must take detours away from the path to the helipad to go save a room that is on the brink of destruction.  If too much destruction occurs in the mansion, the game is over.  Perhaps the helicopter decides it’s a lost cause and abandons Captain Skullet and the remaining survivors.  Personally, that seems like a petty way to go about a rescue mission but those are the parameters that are set for the player. 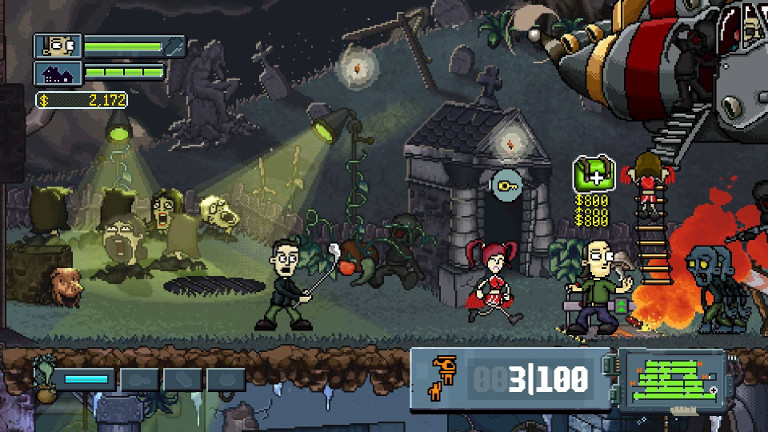 Trophies, or achievements depending on the platform, are just as addictive to collect here as they are in any other game but unlike 99 percent of other games they are not completely useless.  Unlocking more trophies obviously unlocks more bonuses which in turn makes the mission easier.  This is as close to a level system we are going to get, which is helpful because the challenge gets progressively more difficult the more survivors are rescued.

The art style has a well done retro chic appeal.  The cartoonish look of the game is a nice contrast to the violent content and horror influence.  The soundtrack is a perfect blend between retro arcade and horror inspired music.  It sets the mood for zombie stomping the same way Barry White sets the mood for love.  This rescue operation is strictly a solo mission, which is unfortunate since this style of game lends itself exceptionally well to two player co op. 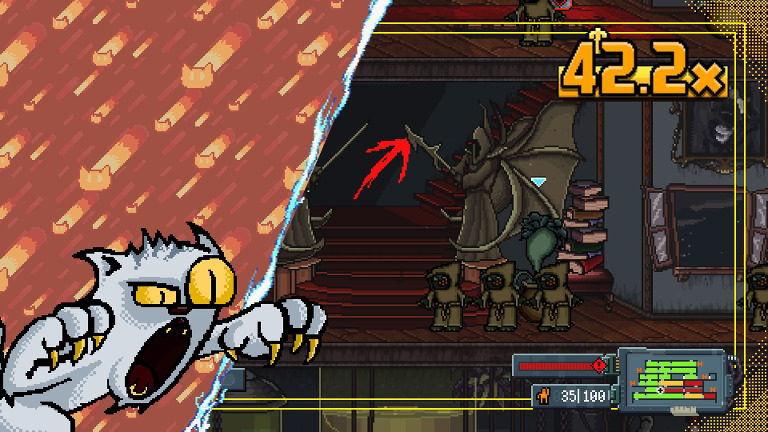 My Night Job is an entertaining homage to older video games and the horror genre, but its repetitive nature and lack of replay value hold it back.  There is only one mansion to explore and its layout never changes, and the hundred people that need to be rescued become tedious after so many.  Despite those criticisms, it is well worth the asking price and can be an enjoyable game for fans of that era’s games.  It succeeds at recreating the feel of arcade beat ’em ups from decades past, almost as if the classic Splatterhouse and Maniac Mansion had an illegitimate love child.   It may not be a game of the year contender, but it is a welcome addition to a 2D arcade action and zombie fan’s game library.