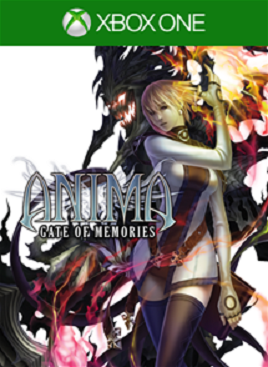 After about a half an hour of playing Project Anima and BadLand Games’ Anima: Gate of Memories, I texted a friend. I advised him that I was playing an action-RPG set in a world on the brink of destruction. The hero, dead set to prevent the apocalypse, must explore many environments with a sarcastic, sentient book for a companion, and can receive different resolutions based on the outcome. Rising to the bait, he expressed excitement that I was finally playing Nier. I wasn’t, of course. As I am not familiar with the source pen and paper RPG, this could be a Warcraft/Warhammer type situation where the inspiration received a video game after the imitator. Still, I was amused.

The thing with Anima is that it is really rough. What is about to follow is a laundry list of problems that drag the experience through the mire, one that it struggles to rise above. While the problems are myriad, there remains a certain something that makes the experience palatable, even downright entertaining. This is a game that was obviously designed by people who love games in all their forms, but it’s possible that their budget or experience couldn’t quite match their ambition.

Anima: Gate of Memories centers around the heroine, known as the Bearer of Calamities, as she attempts to track down an artifact that is to prevent the oncoming end of the world, The Byblos. She does this with the help of a companion tome, Ergo. After chasing down a promising lead, she finds herself at a tower, known most commonly as the Arcane. She soon learns that there are others there with differing needs that must all be stopped. In order to do this, the environment must be explored to find pieces of the villains’ memories, and how they came to be. When enough are found, the Bearer will be able to confront the nemesis and defeat them (usually). Each have five pieces to be found in their respective area. Three are needed to proceed, but finding more affects the story. 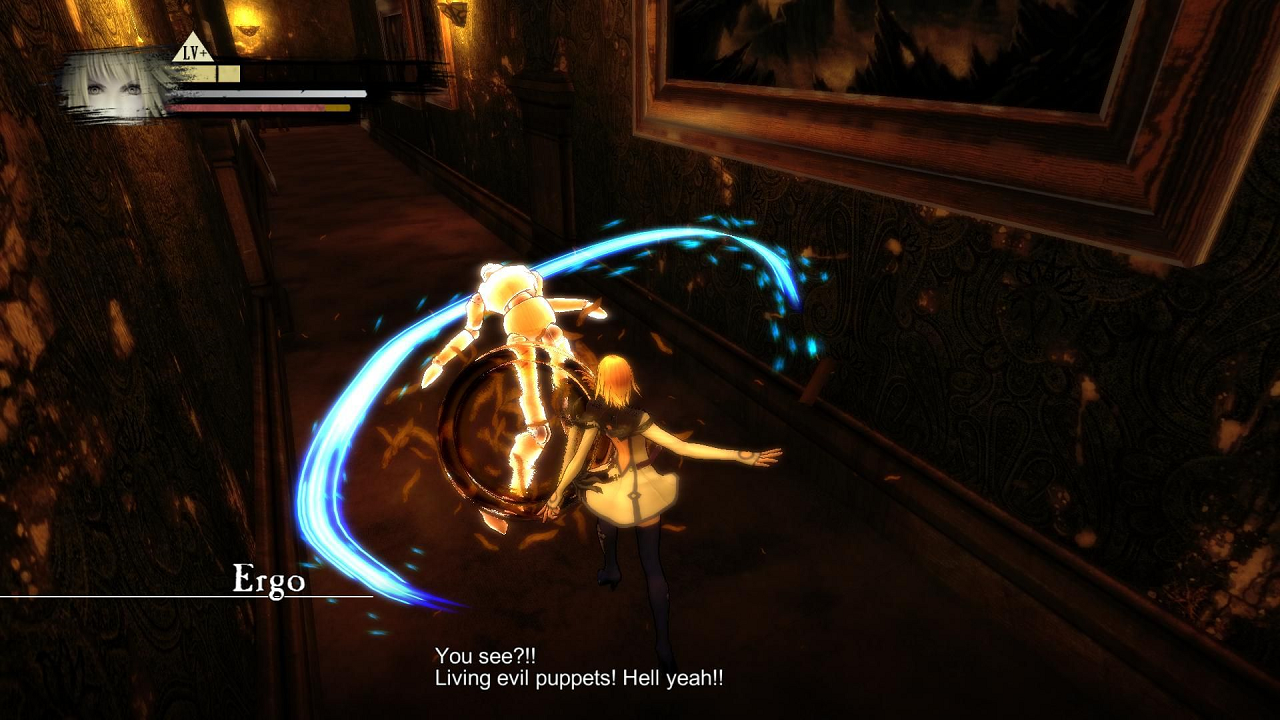 Interestingly, the game works really well at telling the story. Yes, it is a quest for a MacGuffin, but the mysteries surrounding the denizens of the Arcane, how Ergo went from potential conqueror to hardcover manage to be interesting. Of particular note are the memories to be found. Each interloper has five pieces to be found, which make up a rather interesting short story. There are tales around hubris gone wrong, captured gods, and the origins of the King of Fairy Tales. Were there novels, or short story collections, set in this universe, I would instantly purchase and devour them.

While the story is  good, how it is delivered is just as important. It is acceptable that the writing stubs its toe on the dialogue at times. It’s even acceptable that much of the story is delivered with static character stills sans movement or lip syncing. With movement missing, it draws that voice acting to the front. It starts off badly. It felt like the characters weren’t comfortable with the lines nor the story. It does seem to get better as the game goes on, with flopped readings becoming more of an exception rather than a rule. This could be because I grew accustomed to the delivery. They might also have brought in a new voice director but didn’t have the cash to redo already recorded parts. It could be as simple as the actors falling into their characters as time moved on. These theories are, of course, predicated on the idea that it was all acted in sequential order.

Combat plays a huge part of this action RPG, naturally. Here, they are going for a speedier, skill based type of deal. Players can switch between the Bearer and Ergo (in human form) with the press of a button. In theory, this can mean that each can be set up to focus on magic or physical attacks. In practice, because there are enemies that show up here and there that can only be damaged by one or the other, it’s best to try to balance the two for both and treat each character as a way to bail out of a bad situation, which happens often. 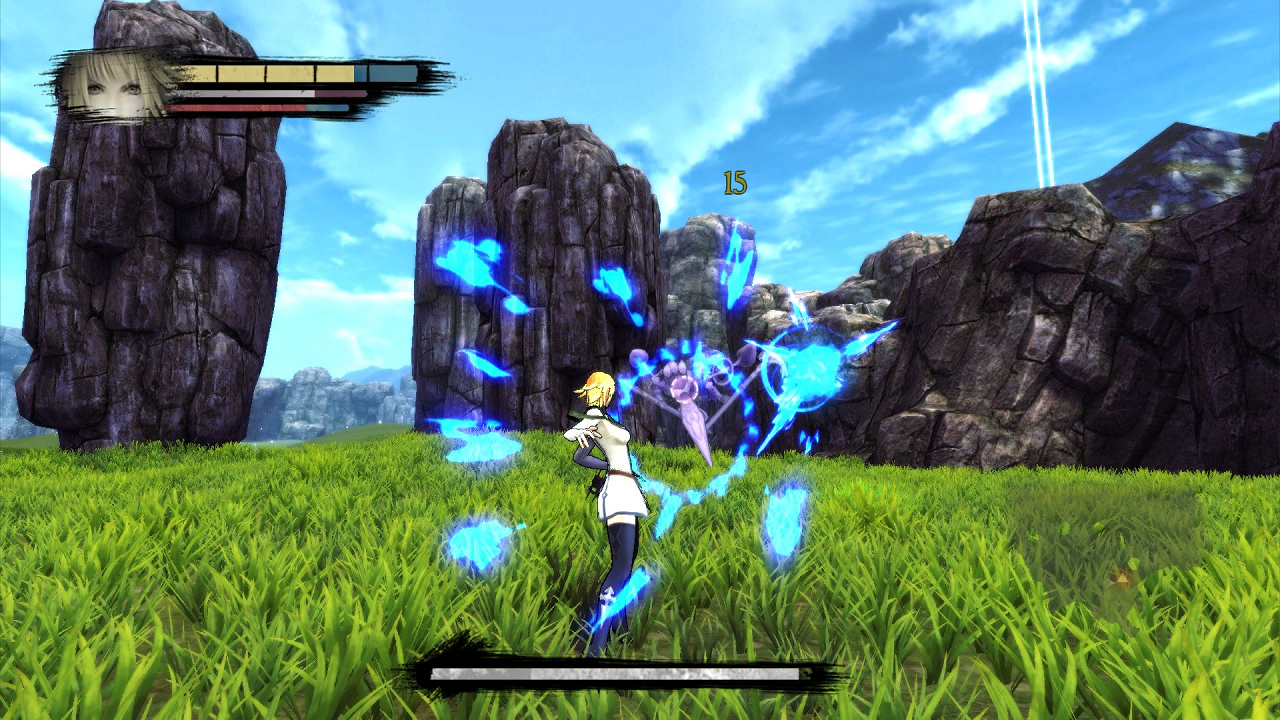 A major component of the the problem comes from foes that fire projectiles. They tend to gang up, so even making use of the dodge/recover mechanics combined with the ability to shoot down incoming projectiles still leads to loops of getting knocked down repeatedly with no real chance to get out of the way. This leads to brutally hard encounters that end up overly frustrating on normal difficulty. It is with great shame that I had to opt for easy mode just to get back to a reasonable challenge. Even then, it manages to be tough. This is coming from someone who enjoys the challenge found in Devil May Cry or Bayonetta.

When the combat works, though, it really works. Some of the boss fights were extremely tense, like the final encounter in the Mansion of Puppets. Giving away too much about the bosses would also give away a heap of what makes the story effective, but only one mini-boss was particularly irritating. There are still plenty of good vanilla encounters to be had. Each enemy has an effective way to take them down. So, falling into a loop of dashing in, executing a combo, targeting a distant orb and firing off a couple of magic shots, using a spell to knock back surrounding foes, and then proceeding to pick them off one by one does happen. It’s just that each great encounter gets counterbalanced with one dripping in garbage. 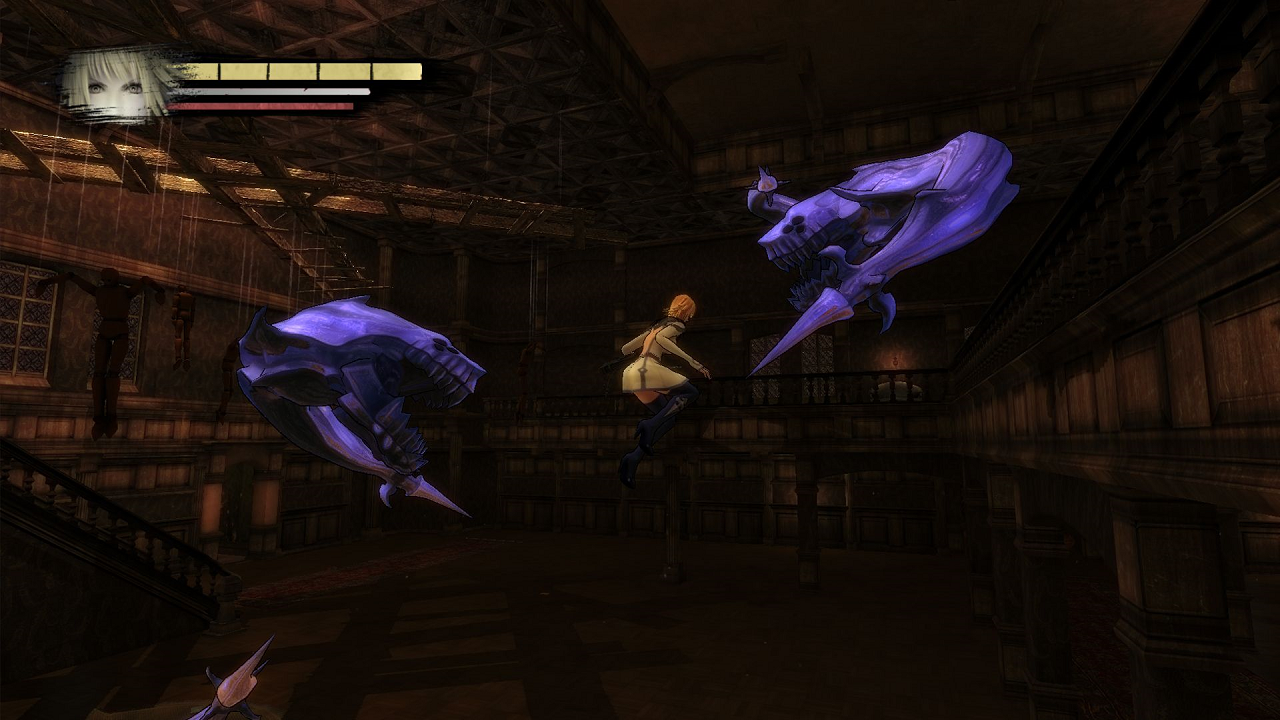 Then there is the platforming. Simply put, this game likes to throw in platforming challenges but is unable to execute these properly. An early mini-boss, the Heart of the Mountain, highlights these shortcomings rather effectively. Here, the player must constantly wrestle with the camera and take guesses at timing to jump over beams that cause instant restart if they hit. The perspective never feels right for these sections, leading players to wonder if a ledge is supposed to be reachable, or if further chicanery with the environment must be undertaken before proceeding. (Looking at you, Fifth Wing.) Simply put, when there is platforming, it’s going to be a bad time.

Aesthetically, Anima is intentionally all over the place. Most of the character models sport bright colors with thick lines that really do help the game to survive its lower budget roots. As the tower itself acts as a clearinghouse for portals to other lands, a wide variety of environmental styles can be utilized, meaning no area will feel alike. One particularly effective area was the winter portion of the tower wing centered around the seasons. The bold UI and character colors against the white, snow saturated background made this region rather striking. Appearance wise, there is no denying that corners had to be cut due to monetary concerns, but the artists made smart decisions to keep a decent level of quality present. 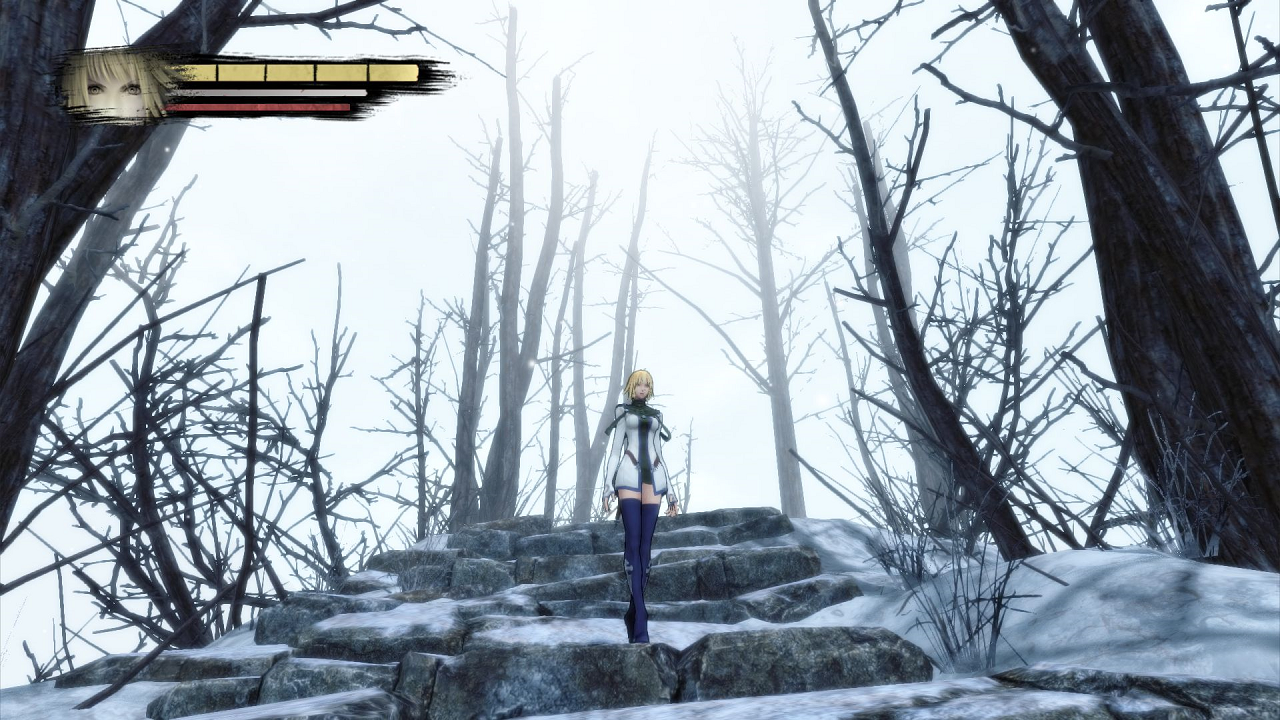 Finally, we have the puzzles. For the most part, these are great. There are instances when note taking becomes almost mandatory to solve some of the riddles, giving the player a feel of investment in the proceedings. Others revolve around paying attention to the lore that is liberally doled out. For the most part, these conundrums were well put together, which makes getting flummoxed when there isn’t meant to be a riddle all the more challenging.

Anima has a tendency to fail to call out interactive objects when needed. More time than should have been necessary was spent trying to figure out how to open a path forward, only to finally realize that a glowing pillar that seemed to be set dressing was actually a switch that sinks into the ground when activated, opening a door in a different room. Because, of course it was. Also, here’s a quick tip: in the Cathedral, there are doors that must be opened by hitting switches in the sequence shown by each entry. One switch with its symbol is easily seen, sitting on a podium in plain site. The other two will be to the left and right of this, requiring the player to double jump and smack it in midair. It took me more time than I care to admit to discover these, and they were right there! 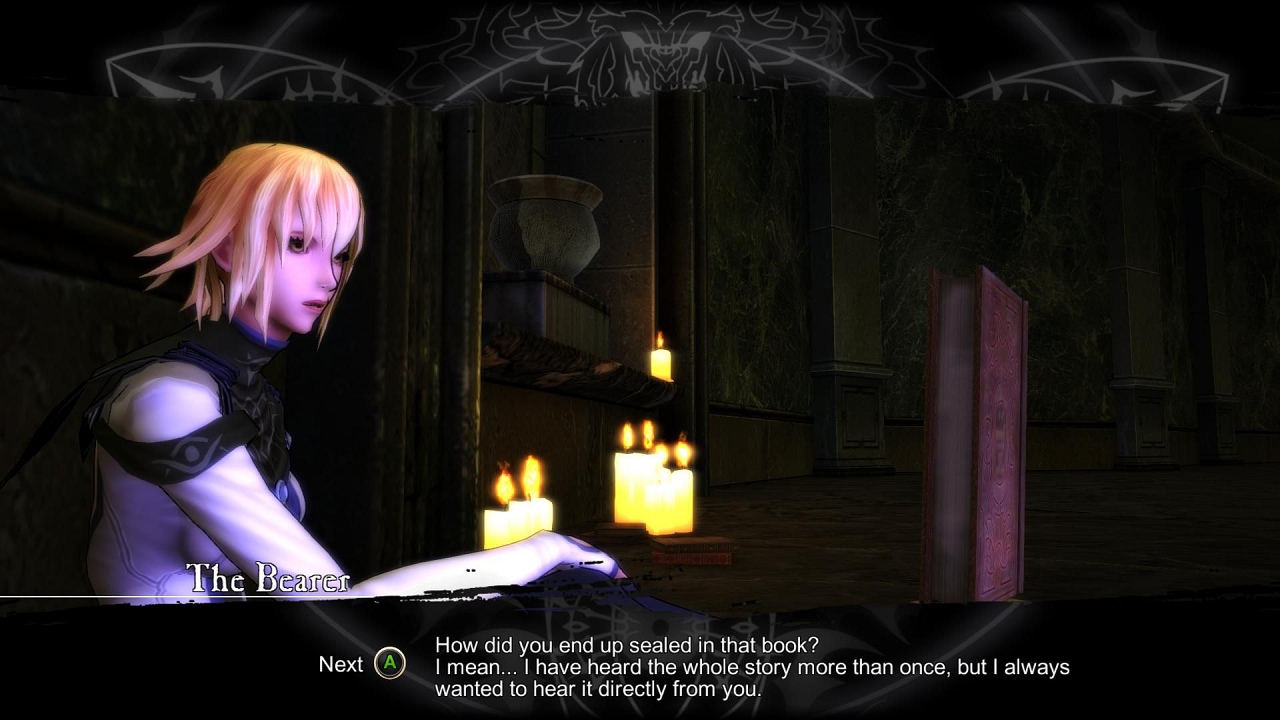 Much of the time in this review was spent bagging on Anima: Gate of Memories’ many, many (many) flaws. Whether it was due to lack of experience, budget, or some combination of both, this game can be rightfully derided and relegated to the junk heap. Every positive that it brings to the table is counterpointed with a legitimate detraction. Yet, there is something here. The story is contrived, but intriguing. The combat is poorly balanced, but still has moments of greatness. I have never reviewed a game with so many glaring problems that I have enjoyed so much. So, players with a strong sense of patience and more forgiveness than should be required in their souls should check this out. There are jewels among the rubble of this tower.