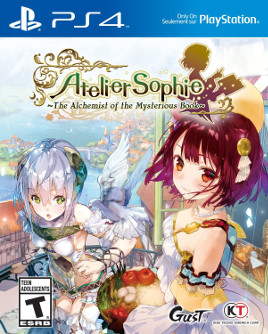 Atelier Sophie: The Alchemist of the Mysterious Book

There are some people that speak of books as being their best friends, or that they are never alone when they are in the company of a book.  Atelier Sophie:  The Alchemist of the Mysterious Book is somewhat of a literal take on this sentiment.  Sophie, the titular alchemist, has the unusual experience of one her books coming to life and speaking to her.  Inside this book lives a soul that goes by the name of Plachta.  Plachta supposedly was a great alchemist 500 years ago, but unfortunately for her not only has she been turned into a flying talking book, she also has an extreme case of amnesia.  Or maybe 500 years is just a long time to remember.  Some people can’t retain information 24 hours.

And with the appearance of Plachta, thus begins Sophie’s quest.  Being the helpful person she is, she wants to assist Plachta in getting her memories back.  She and a couple friends, Monika and Oskar, explore the areas surrounding her hometown of Kirchen Bell to find various materials.  By creating certain items through the alchemy cauldron, Plachta’s memories start to return one by one, which in typical JRPG fashion leads to grander goals for the adventuring party, taking them to more exotic lands to fight more dangerous monsters and collect more valuable treasure.  Also in typical JRPG fashion, new companions are met on this journey and end up joining the party.  Different party members offer different abilities, strengths, weaknesses, otherwise known as the general character variations one would expect in a JRPG.

What separates this from the standard JRPG is how it progresses.  The standard formula, at least the ones that can be referenced based on personal experience, is the game progresses by traveling to new areas and usually defeating some boss monster or powerful NPC villain.  Traditional boss monsters are virtually nonexistent.  The hometown serves as a hub for adventure.  The party ventures out with the primary goal of collecting alchemy ingredients to synthesize into items to help Plachta rebuild her memories.  Leaving home to venture off to new lands to save the world from a cataclysmic event is not what Atelier Sophie is about.  Go out, collect materials, and come home and see what is going on with the other townspeople in their day to day lives. 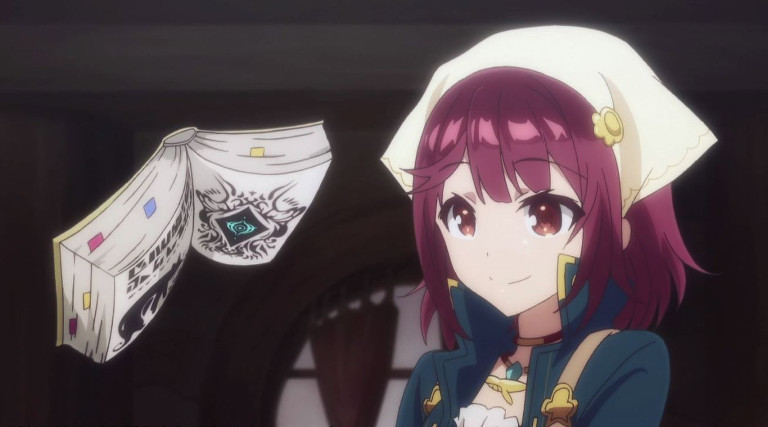 Sophie’s place in her village and her relationship with the other townspeople is the secondary main focal point after Plachta.  Interacting with the townspeople opens up new quests and new areas to explore.  After Sophie talks to select people they want to accompany her when she goes out looking for materials.  Sophie and Plachta’s relationship develops throughout the game and it really does seem to take on a literal interpretation of the phrase a book is her best friend with some later twists inspired by Pgymalion.  Because relationships are a major theme of the game, Sophie’s relationship with party members and townspeople develop and grow throughout the game as well, with the common goal of assisting Plachta serving as the catalyst.  Eventually the ability to give people gifts to improve their opinion of you becomes available.

The church is a major part of the community in Kirchen Bell and many of the characters spend a lot of time going to church for prayer.  Sophie is notoriously absent from church and one of her friends in particular puts a lot of effort in coercing Sophie to become a regular fixture at prayer gatherings.  Sophie’s excuse is she gets so caught up in her alchemy.  This social dynamic being presented in the game caused a chuckle.  In a very lighthearted way, which is the overall demeanor of Atelier Sophie, the developers managed to include the religion versus science debate. 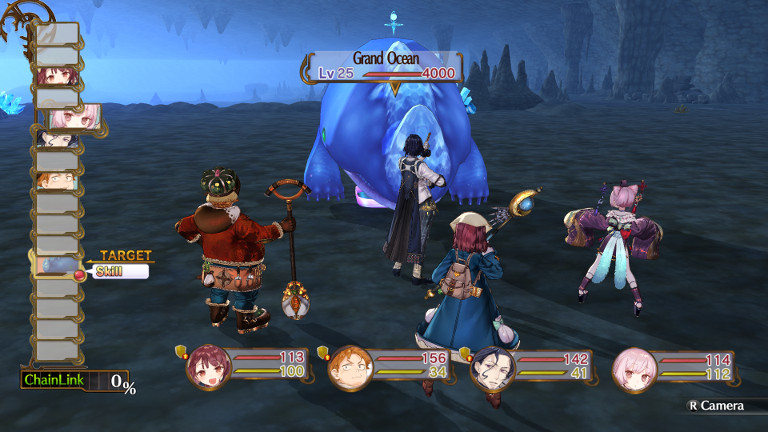 For a game that focuses on collecting alchemy ingredients, the battle system is interesting.  In a nutshell it is a typical turn-based affair this genre is known for but adds a couple twists to it.  The battles are not random encounters but more like what is used in Dragon Quest IX and Ni No Kuni, where the enemies are visible moving about the screen, waiting to either be engaged in combat by the player or to start a fight like the jerks they are.  Each character can select either a defensive or offensive stance that determines what type of support actions they take.  As damage is inflicted or received, a gauge is filled that allows characters to perform extra actions during a turn.  A defensive stance can result in absorbing most of the damage in an attack directed at someone else whereas an offensive stance can result in a devastating extra attack.  If a certain number of characters have the same stance, special actions can occur if the bar is filled to a certain percentage.

Time and weather factor in to what will be encountered during the ingredient hunting ventures.  Each month is thirty days and each week is five days.  Certain alchemy ingredients and certain monsters can only be found during certain times of the day and under certain weather conditions.  Character locations in town vary depending on time of day or day of the week.  Like most of us they have a weekday and weekend schedule, and tend to follow the same routine on a given day.  If a character is spotted at an unusual place at an unusual time, it is advisable to see what they are up to.  Certain events in town are day and time specific.  Luckily there is a bed that allows for the accelerated passage of time.  Much like some people this reviewer knows, Sophie can spend up to 9 days and 23 hours in bed at one time. 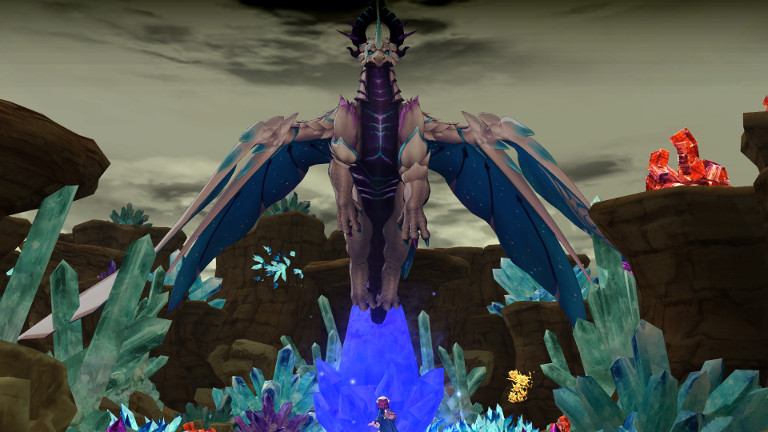 In what can be assumed to be an attempt to add a sense of urgency and realism to the expeditions, there is a fatigue system based on LP points.  This stat decreases over time and as it decreases, the character’s effectiveness in battle decreases with it.  Going back to town to rest revitalizes that LP but finding the relevance of this system is tricky.  None of the journeys out of town last very long.  This is in part to the monsters are pretty tough and can beat up the party rather quickly, and also due to there is limited space for materials.  Spending just a few minutes in most areas collecting materials is enough to fill up the inventory, forcing the player to either discard collected items or return to town to put them in storage.

The alchemy cauldron plays a major role in the story, and fortunately the minigame of alchemizing new items into existence is moderately fun, that is to say as fun as any potion making minigame can be.  Each item going into the cauldron is a certain shape that occupies so many squares on the grid.  The more squares covered leads to greater bonuses, but if part of an ingredient overlaps any part of another ingredient the entire covered ingredients effects get cancelled out, so there is some geometric puzzle solving involved.  Different elements and item quality also play a role in bonus effects that accompany the created items. 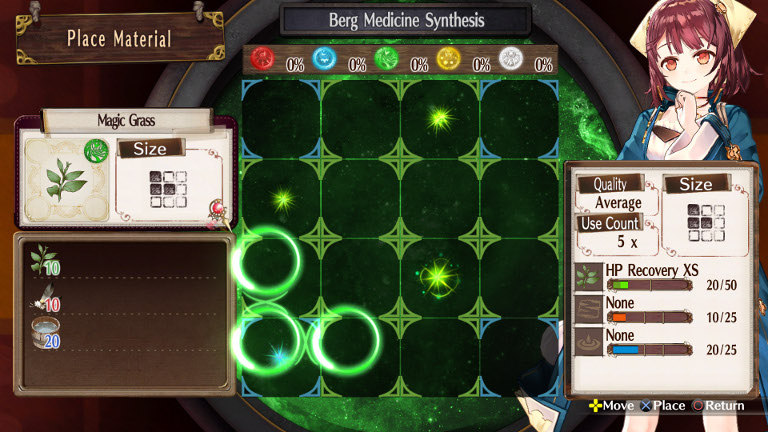 Atelier Sophie: The Alchemist of the Mysterious Book follows many standard JRPG practices, but breaks out of the mold enough to not be just another generic one.  The story progresses through interaction with the other characters, making Sophie’s relationship with other people one of the most important aspects of the game, especially if the other person happens to be a flying, talking book.  The character-driven story progression fits with the light-hearted tone.  Combat, while actually well designed with an interesting chain system, is not the main objective, but does contribute to the enjoyment.  The Atelier series is not known for having the greatest stories within the genre and entry number seventeen in the series does not do anything to change that. Fans will eat it up and for people who have been curious about the Atelier series but are uncertain about what game to start with, this PS4 debut is a new character with a new story and appears to be a good starting point.