The Call of Duty series has taken some interesting turns over the past decade. It’s gone from a World War II game to something that explores modern combat, black ops teams, and near-future warfare as well. Prior entries have focused on making you the rookie – which makes sense, since you’re starting out the narrative as a new player. However, this game sets you in the role of a captain and in doing so, adds pressure to the role. You’ll have more personal choice than usual, and you will have to lead your team and make choices that impact your team.

The franchise’s faster-paced gameplay from Black Ops and especially Advanced Warfare has been furthered here. You have a grappling hook to traverse and use small aircrafts to go from place to place and attack enemy areas. Parkour-style gameplay has been added to the mix over time, but Infinite Warfare changes things up a lot by making the combat far more angular. It’s a strange term to use to describe combat in an FPS, but it fits here given how open the areas are and how you can fight from any surface you encounter. 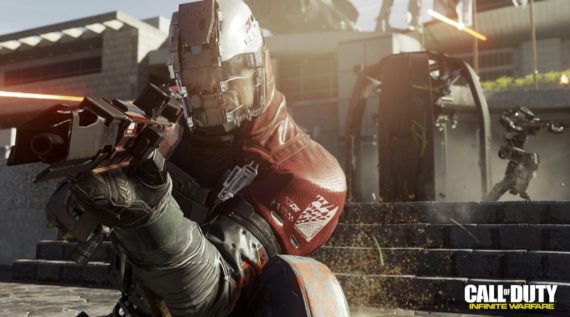 If a giant set piece smashes an area to bits, you’ll be able to glide to those areas and fight off of them – even if that means you’re fighting at a 90 degree angle. It’s a bit odd in theory, but it really makes things stand out here compared to how they have before. You can also use your grappling hook for more than just traversal. If you want to play a bit like Scorpion and bring an enemy over to your location and beat their brains in, you can. Those wanting to keep things gun-based will still be able to do, and fight with a faster pace than even Advanced Warfare allowed. It looks like a dream come true for thrill-seekers, and could provide the craziest multiplayer action yet for the franchise.

With a shift in role from a rookie to a leader, and a revamped goal to provide fast-paced gameplay from every angle possible, Infinite Warfare is set to change the franchise once again. Call of Duty: Infinite Warfare is set for a November 4 release, with several versions of the game available. If you want just the stock game, then you can get that for $59.99 on PC, Xbox One, and the PlayStation 4. Those wanting a version that also includes a remake of Modern Warfare can get the Legacy Edition for $79.99.