Sony’s E3 2016 conference began with an epic orchestral piece and the unveiling of the long anticipated return of PlayStation’s favorite rage monster, Kratos, and while the biggest badass to ever step across the Greek mythos is back, he’s perhaps a kinder, gentler Kratos than we remember. 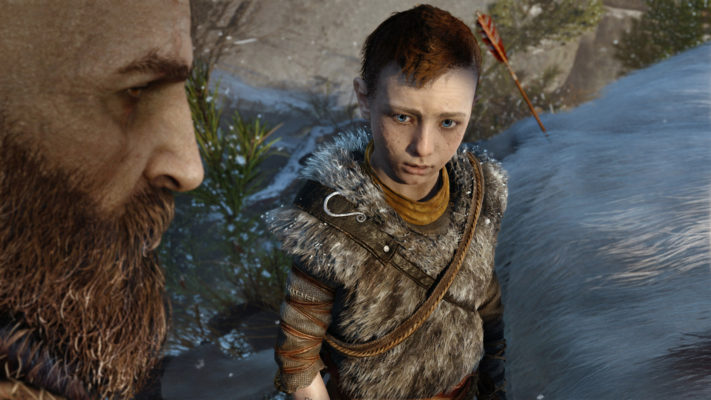 Taking a deeper look into the game, we are to presume it takes place several years in the future at a different point of pre-history. Kratos now has had a second chance at a normal life, as we are introduced to his son, and like most people, having a child has changed the king of killing. He sees things a bit differently, now and is trying to control his temper. Godhood was thrust upon him without choice. His human side and god side conflict with each other creating his eternal rage, but this new lease of life has allowed him to reconnect with his humanity. It’s a struggle, one Kratos fails at often, but he is trying to be more Bruce Banner than Incredible Hulk.

Kratos instructs his son to hunt a deer, he takes aim with a bow and misses, scaring the deer away. This angers Kratos greatly who orders the boy to go after the deer when they are attacked by some strange looking creatures which Kratos dispatches quite handily with the use of a new axe, that is decorated with runes and after throwing it, returns to him, similar to Thor with Mjolnir. After this the two continue to walk this snowy path and it’s clear that Kratos isn’t in Greece anymore. This colder, harsher climate and the runes and writing on the structures show us signal to us that Kratos’ new journey will have him up against the Norse Gods this time. 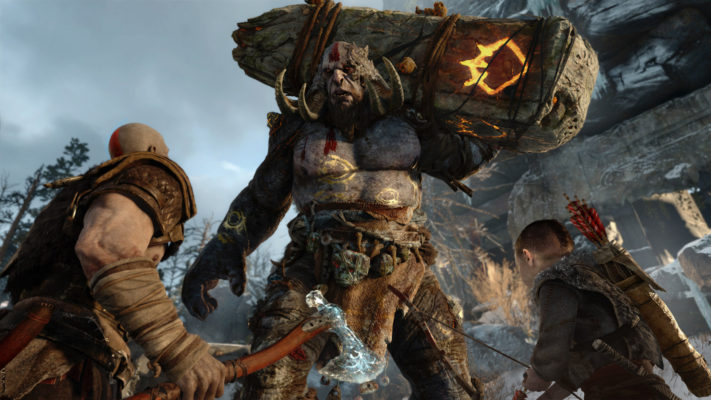 Suddenly Kratos and son are attacked by what is likely a frost giant wielding an enormous carved piece of wood, also with runes on it. These runes glow and the giant seems to be able to wield fire straight from his fingertips as well, giving him multiple ways to attack. Kratos isn’t having any of this and after getting in a few hits (including his son getting a couple hits with is bow), “Spartan Rage” becomes available and with the click of L3 and R3 together, Kratos charges up the giant and cold-clocks him, taking off pieces of his tusks in the process before slamming his down into the ground and yelling for his son to finish him off.  The boy hesitates, and misses the giant, shooting Kratos in his armor with the arrow. Kratos finishes off the monster and the boy tries to apologize. Instead of getting mad, Kratos simply tells him his deer is getting away and the hunt is back on.

They eventually get to a clearing and spot the deer. It’s at this point the game changes to give you control of the boy who is learning from Kratos to breathe calmly and shoot it as a target instead of an animal, and he dispatches the deer quickly.  Typically this would’ve been a cutscene, but the Sony Santa Monica team likes to interweave interactivity with cinematics with they can so from time to time the game will change player point-of-view to allow for this. There is a dedicated button on the controller to interact with Kratos’ son and how you load out or upgrade the boy over the course of the game will change things. He’s never a burden, and is exceptionally competent, passively moving about the battlefield, in a space with 15 enemies, he’ll start to pick off the lesser foes while Kratos takes on the major threats.

Following the arrow shot, they walk down to the body of the beast, and we see one last bonding moment between father and son as Kratos teaches him to put the animal out of its misery and kill it. Proud of this moment Kratos goes to reach for the boy to pat him on his back, but is still awkward amongst his fellow humans and pulls away, as the rest of the landscape around them comes into focus we see a giant dragon flying, and the demo is over. 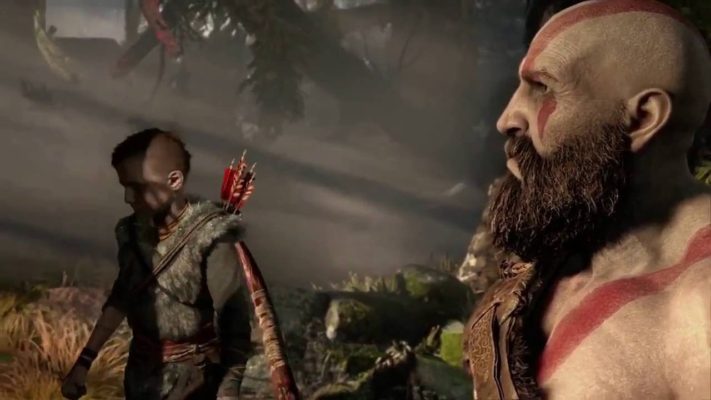 The rest of the family unit was not revealed, but wherever the rest of them are, it is now known that this is going to be a major part of the God of War storyline. God of War conversations between Sony Santa Monica and Sony were held for a little over a year before the game was finally green-lit and Sony has been in full support since, allowing Corey Barlog and the rest of the Sony Santa Monica team to tell this new story and paint their own image of Norse mythology, as well as make some changes to the evolving franchise.

Perhaps the biggest noticeable change is the camera is up much closer on Kratos, in a more over-the-shoulder view, which is not typical for a game built around melee combat but at no point during the fighting does it seem like the camera is an issue. Other changes are in store for Kratos but we know that fundamentally the studio has kept Kratos and his history intact, so the first chapter of his life and the 7 games throughout the Greek era are maintained, as well as the pick-up-and-play accessibility to the game, though mastery of all of the God of War’s moves will take some time. The team is going right back to work on the game after E3 and we’ll see more of it as it gets closer to completion, but there is currently no release schedule, so we may be looking at more of this game at E3 2017.