Tripwire loves them some gore. This noncontroversial fact was proven with their Killing Floor series in spades. They also have a fondness for overwhelming the players, forcing teams to work together to survive the never ending waves of the various hulking gore monsters, dubbed “zeds,” that have the singular desire to smash player’s faces. The sequel has been on Steam in Early Access for a while, and the plans have been in place for awhile to bring it to PlayStation 4. It is the latter that I was able to try during E3.

After loading up and selecting my class, the Firebug, the team of four I found myself in prepared to face the onslaught. One thing that was immediately striking was how damn good the game looked. While it might fail a side-by-side test against the PC version, it was obvious the developer Tripwire Interactive spent some love and sweat optimizing the game for Sony’s odd shaped box. The environmental textures were highly detailed, the blood splattered in a satisfying fashion, and the zed’s skin crisped up nice and tasty under the stream of my caulk gun inspired flamethrower. 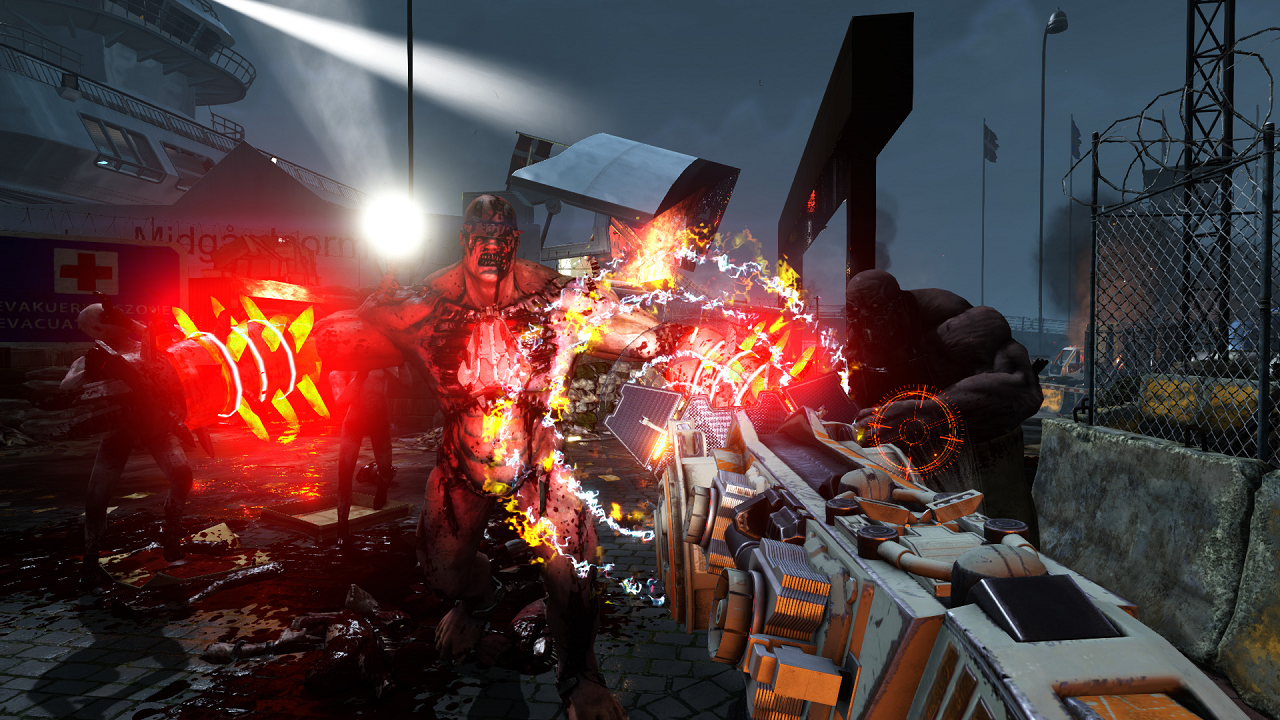 The game itself is as brutal in the console version as it is on the PC. The hordes were never ending as they poured in from various places on the map. There are various things that can be done to stem the tide. Doors can be closed and welded shut, for example, and choke points used to make it so the team is only fighting a few of the zombie like foes at a time, instead of all of them.

Lamentably, the team I was with did not seem to realize this. Each member kept wandering off, to be promptly gutted. I was able to chase after them at times to heal them with the timer limited health kit I had. Apparently, the lesson wasn’t learned, as they would wander off again in hopes of seeing if a zed would be kind enough to assist with an instant weight loss plan by way of intestine removal. 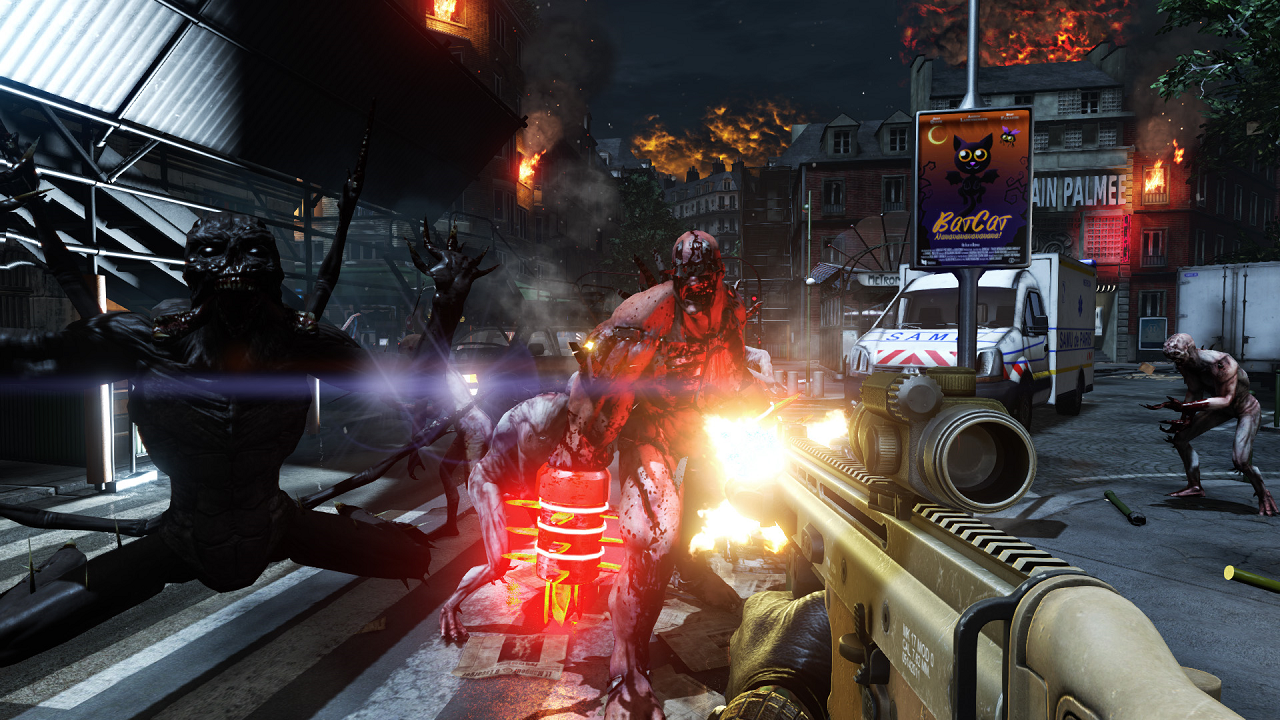 It might seem that I am complaining. I am not. The ineptitude of the pickup group managed to highlight some of the tuning done to streamline the console controls. As I was the only one who understood the concept of sealing doors, and the rest were not interested in my pleas for teamwork, I had to restock quickly during the thirty second breaks so that I could try prepare as much of the environment as possible. Restocking all ammunition and armor was as simple as a click of the stick. Upgrading to the Microwave Gun took only a few swift button presses (though a dev had to stop me and tell me to do so). Really, when getting to restock station, everything is laid out so that full upgrades can be done in less than five seconds. Pretty snazzy and smartly done.

After the match was over, I spoke to a couple of devs about the experience, and explained that I was trying to restock and get out to prep the field. “Maybe we can make the level upgrades automatic,” one of the devs commented. “But what about the people who save their cash and skip levels?” the other retorted. Suffice it to say, even though this played like a dream, numerous things are being considered to keep the console player in the fight and not spending time wrestling with the inputs. 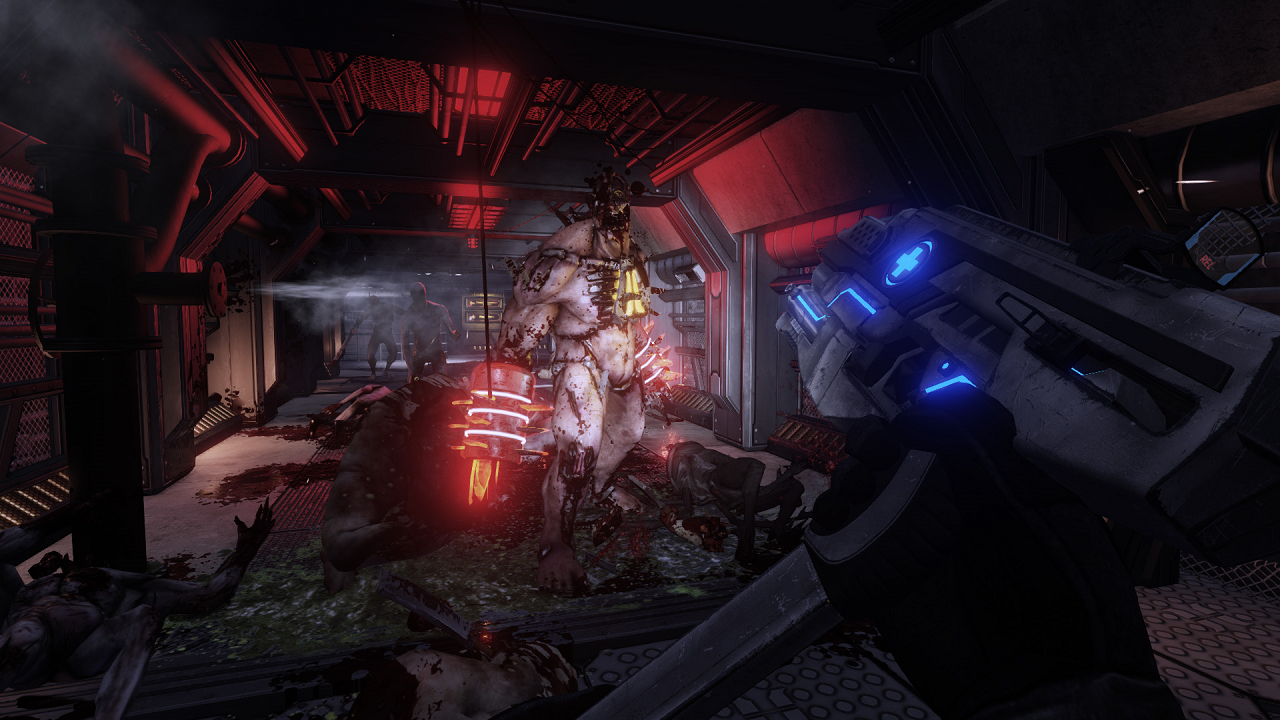 In the end I was really impressed with where Tripwire is taking Killing Floor 2 on the PlayStation 4. Despite the hardware being limited when compared to the PC, it runs smooth. The controls are dialed in to make play a snap, and the developer is still trying to keep every option deep but accessible. Seeing as how it will support six player co-op when it comes out later this year, there will be plenty of team make ups to try as swarms of mutated zed get cut down, showcasing the game’s visceral glory.