When the Yooka-Laylee Kickstarter was announced, it drew immense and immediate attention. Watching the pledges tick up at a rapid pace through the first hours and days was exciting from an outsider perspective, but tremendously more so for the team at Playtonic Games. These Rare veterans were seeing in a very real sense just how desperate gamers were for 3D platformers to make their triumphant return. Of course, their status as ex-Rare staff curried favor even further because this company created some of the greatest 3D platformers out there.

Thanks to E3 2016, we have been able to see Yooka-Laylee in action via a live gameplay demo. At first blush, it appears tremendously close to Nintendo 64 releases such as Banjo-Kazooie. Seriously. Everything from the bright colors to the presentation of character dialogue and even pause menu feels ripped straight from the era. The biggest immediate differences are technical in nature, such as widescreen presentation, far smoother animation, and better graphics in general. Beyond that, though, it appears there are not many other changes to be had to merit this title the description of “modernized platformer.” 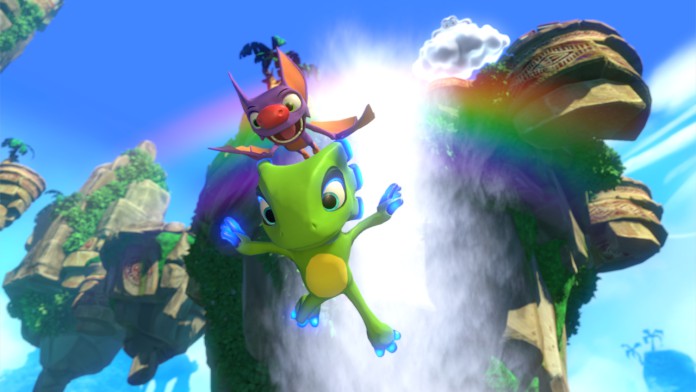 Sure, there are some things Playtonic have done to revitalize the formula. Now you don’t need to collect five million types of currency in order to stay stocked up on all your goods. Instead, all special skills are handled by one bar which fills via eating butterflies that dot the landscape. It’s a nice gesture, but there are still 200 coins to collect per stage, as well as a handful of characters to collect on each one as well. In that sense, the collectathon nature is still alive and well. While it’s suggested that one doesn’t need to collect everything, you do actually need to grab all those coins if you expect to unlock full versions of levels.

You see, only a portion of any stage is available to start with. Only by collecting and exploring will you be able to open up all of it for your platforming pleasure. It was hard to tell the full scope of these fully revealed stages, but they at least appear larger than what we’re used to seeing in Nintendo 64 titles. However, I’m not sure that, even at their most expanded, that it makes up for the small amount of levels in total. On the positive side of things, it appears that there are multiple ways to manipulate these environments on the fly by solving puzzles and interacting with other characters. For example, a rain cloud (once activated) filled a previously dry riverbed with water. 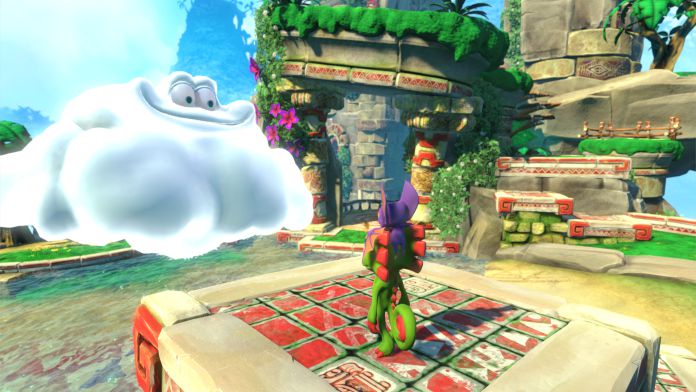 The one thing which kept coming to mind while watching Yooka-Laylee was that it does not seem to have its own identity. Yes, it includes the cutesy buddy-duo crew of Yooka and Laylee who each have unique special powers (when compared to Banjo and Kazooie), but I failed to feel anything “special” about the whole thing. Once you move beyond the main characters, others also feel less lively and inspired. Heck, only a cute snake named Trouser managed to get me giggling during the demo. Landscapes, while colorful, also felt rather uninteresting in comparison to some of the imaginative vistas present during the Nintendo 64 era (then again, I only saw one level on display).

A game cannot succeed purely by harping off what other games have already done. Just look at the zillions of “me too” platformers which arrived on Nintendo 64. There were tons, but only a few stood out as the very best to play amongst the crowd. Rare knows what it takes to make incredible games, and my hope is that the skilled staff at Playtonic Games perfect the platformer formula with Yooka-Laylee. All I know is that their E3 demo failed to capture the magic of 3D platforming which was a tremendously surprising let down.