Team17 may now be a publisher as well as developer, but there’s still one thing they’re known best for — Worms. The Worms series has been around for years and continues to see new entries because people simply want to keep playing this enjoyable, goofy strategy game. As such, a brand new title in the series will soon be on the way for PC as well as PS4 and Xbox One later this year. Worms W.M.D. is not just the latest in a long string of games, but one which is looking to enhance the existing formula in smart new ways.

What has always made this 2D turn-based strategy series so fun? In large part, it’s the weapons which make the game stand out. Luckily, this title retains tons of the classic weaponry but also adds in a handful of neat new toys to try out on unsuspecting worms. The bigger change comes in the form of crafting. Now you don’t simply have to wait around as the opponent carefully plots out their next move. Instead, you’re free to start crafting upgraded items. As you might expect, crafted items tend to offer greater effects (ex: the Electric Sheep is better than the plain old Sheep). 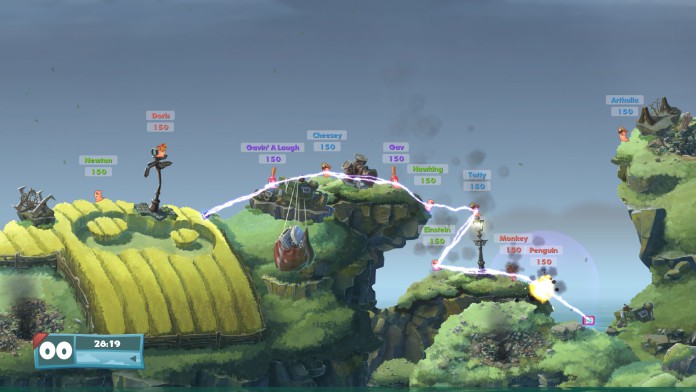 There are other key changes set to mix up play strategies. For one, there are now mounted guns situated across maps. Once a worm gets in range they’ll automatically start firing away. It’s possible to destroy these turrets, but oftentimes not before they take a chunk of your worm’s health. Some may not like the mounted guns as they are automatically placed and not player controlled, but for others they seem like just another battlefield characteristic to keep an eye on.

Also new to Worms W.M.D. is the inclusion of vehicles. Tanks, helicopters, and more can be spawned at player command and offer access to far stronger attacks. With that said, drivers are not completely secure when within a vehicle. If an enemy worm crawls up onto the vehicle they can simply take over and control it for themselves. As strong as vehicles are, they’re also pretty easy to destroy. Once its health is gone, worms have just seconds to scurry away before an explosion occurs. These design decisions ensure that vehicles are not an overpowered portion of gameplay. 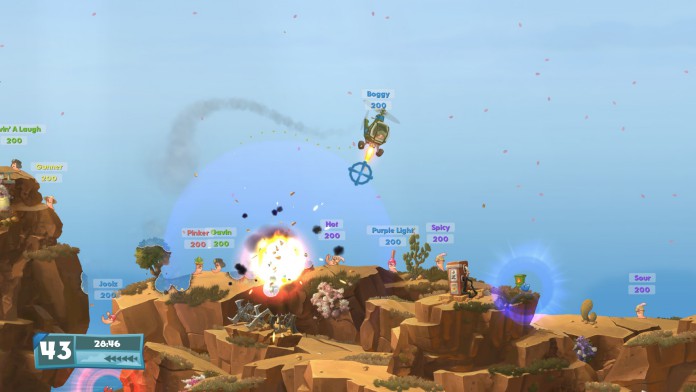 Buildings also now appear on a variety of maps. Any worm is free to wriggle inside one. What’s the benefit to buildings? Simple – the enemy cannot see within a building if they’re not already inside it. As such, it leads to a level of protection from even players skilled at aiming shots. They simply can’t target a worm if they can’t see it inside the structure! Obviously, sticking within a building for too long is not a good idea either. Eventually they’ll be flushed out or taken down with the building itself.

Worms W.M.D. also reclaims the iconic art style with 2D animated graphics and cartoony backdrops. There was nothing wrong with the 3D renditions of worms in recent releases, but there’s no doubt that the drawn visuals look a good deal better. Despite all these changes, the game still includes a solo campaign as well as copious online and local multiplayer freedom. Even longtime fans who have skipped other releases may now have a reason to try out Worms W.M.D. thanks to its willingness to evolve the formula.