Deus Ex: Mankind Divided is getting a companion app in Deus Ex GO. That “GO” probably sounds familiar and there’s a reason why. Deus Ex GO is based on the popular Lara Croft GO, the companion app for Tomb Raider. With Deus Ex GO, Square Enix Montreal is looking to replicate the success of Lara Croft Go and Hitman Go by layering on some of Deus Ex’s unique mechanics. Fourteen levels were available to demo at E3 2016 and they gave a good idea of what to expect from Deus Ex GO.

The premise of Deus Ex GO is simple. You must escort Adam Jensen safely from the start of the level to the end. There will be plenty of obstacles in your patch including different types of enemies. Human soldiers and turrets were present in the demo, and each will mercilessly try to take Adam down. Go is all about carefully planning each move, and manipulating your enemies to either sneak past them or incapacitate them.

Things begin simply enough, players are given a view of the map, including its different traps and enemies. Players can then swipe or tap to send Jensen to the next node. Every move takes up a turn, which is important to remember when facing enemies. Unlike in Deus Ex: Mankind Divided, Jensen can’t take on any enemy head-on. The moment Jensen gets in an enemy’s line of sight they will rush. While rushing, an enemy is completely invincible and get a turn to move immediately after Jensen moves. Learning when to aggravate an enemy and when to leave them alone is the key to success. Forcing an enemy to rush you could open new paths, or allow Jensen to work his way behind for a sneak attack. 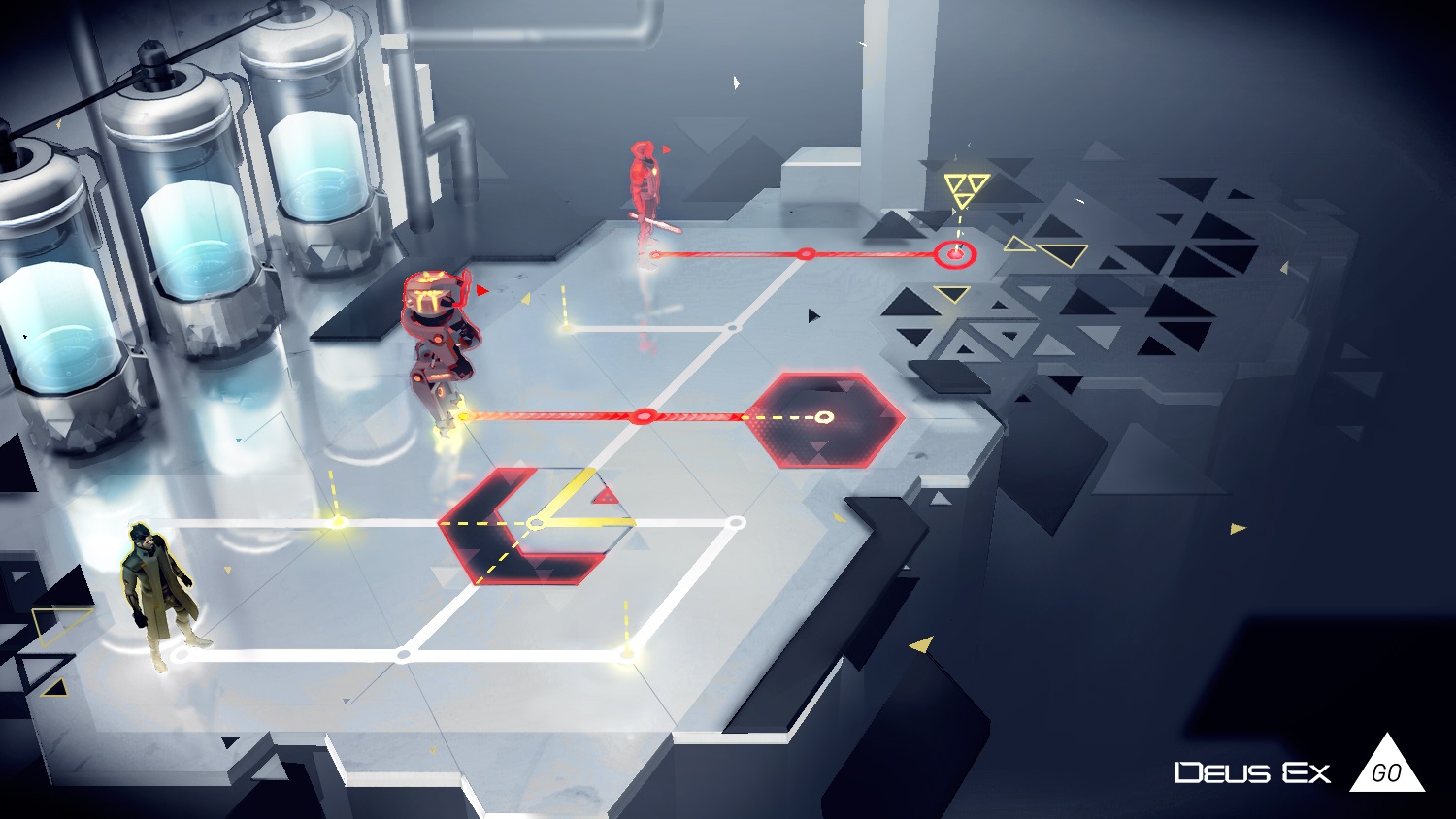 Deus Ex GO does incorporate different gameplay mechanics from the Deus Ex universe, specifically augmentations and hacking. The only augmentation shown in the demo stages was invisibility, and it was extremely useful. Invisibility gives Jensen one free space to move around undetected. Activated at any point, invisibility’s importance cannot be understated, especially after turrets are introduced. Unlike the human adversaries, turrets don’t need to waste time rushing at you. Instead, expect open-fire should Jensen step on a node in a turret’s line-of-fire. Invisibility is one of two ways to get past turrets without becoming Swiss cheese.

Hacking remains a vital mechanic in the Deus Ex universe and rears its head in GO. Players are able to hack the map by drawing a line through the different nodes towards an object. Hacking can be used to control turrets and turn them against human enemies or to activate dormant nodes. Sometimes you’ll need to use a combination of both to reach the end of the level. Just be wary, the different hacking lines can’t crisscross or overlap.

Deus Ex GO serves as a fun little companion app for Deus Ex: Mankind Divided. It looks simple on the surface, but diving into the later levels reveals there’s quite a lot of depth here. The fourteen levels on display were good and the full experience will come packed with even more levels, augmentations and enemies. There’s a whole lot to enjoy here and it can all be played on that device in your pocket.

Deus Ex GO is out sometime this summer on iOS and Android devices.