Wild Guns originally launched on the Super Nintendo back in 1994. Unfortunately, many of us simply missed out on the title completely. Those who didn’t were treated to a goofy, colorful rendition of the wild west with copious arcade gallery shooting to play through. On the heels of Natsume’s thirtieth anniversary, they’ve gone and decided to bring back Wild Guns for a new generation as well as please longtime fans.

As far as Wild Guns: Reloaded is concerned, it still follows the same basic concepts as the original with all the classic stages included. In a fun way, the storyline has always played against stereotypes. Protagonist Annie has had her family abducted and killed, which is leading her on a path of revenge. Along the way she hires Clint to help her in these aims. One of the main differences between the original and upcoming game is that there are two additional characters now beyond Annie and Clint to play as. Unfortunately, these new characters weren’t ready to be shown at E3!

Given that there are four characters, this of course means that there is options for co-op play between one to four players. The thing is, Wild Guns: Reloaded is so hectic that you’ll probably want to opt for a full player roster whenever possible. Not only do cowboys pop out to shoot at you, so to do giant western robots and other nonsense. Dodging bullets is imperative as players only have three lives to make it through. Run out of lives and your character is forced to the sidelines with no means of returning. It’s safe to say that this game is super tough, but not unfairly so. Once you start to grasp the enemy patterns and look through the chaos you’ll be at least a little more capable of surviving. 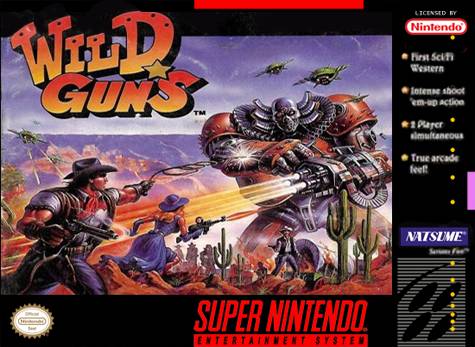 So is Wild Guns: Reloaded just a HD version of a SNES game? No, as aside from the added characters there are some other changes. You can play through all the old levels you remember, but there are set to be brand new stages added into the package as well. Not only that but there will even be brand new special weapons and also bosses to square off against. This is huge given that the original game’s bosses are all quite unique and entertaining in their own ways. Hopefully the new ones retain that same goofy spirit.

It’s amazing but somehow one of the games I ended up having the most fun with during E3 week was none other than this retro revitalization. Yes, the over twenty year old gameplay of Wild Guns still holds up. It’s totally frantic, hilarious and challenging which makes it a great choice for playing with a group of friends. Wild Guns: Reloaded is coming to PS4 and does not have a release date as of yet.