Harvest Moon has been in quite the interesting transition period these past few years. Ever since the original series hopped over and was renamed as Story of Seasons, Natsume have had to work doubly hard to create a new outlook on Harvest Moon while retaining that core brand image. First there was Harvest Moon: The Lost Valley which added voxels to farming and then there was Harvest Moon: Seeds of Memories on mobile devices. While they still looked like the classic series, fans were split on whether they actually adored these latest games or not.

Harvest Moon: Skytree Village continues forward with some of the design decisions of Harvest Moon: The Lost Valley but introduces new objects as well as a multitude of quality of life changes. Some may wonder why these aspects weren’t in the previous title to begin with, but if nothing else, this shows that Natsume are incredibly attentive to the fans and are doing what they can to improve each release. In some sense, the story behind this latest game almost sounds like a parable for the struggle Natsume are facing now as many longtime fans look toward the upcoming Story of Seasons: Trio of Towns instead. 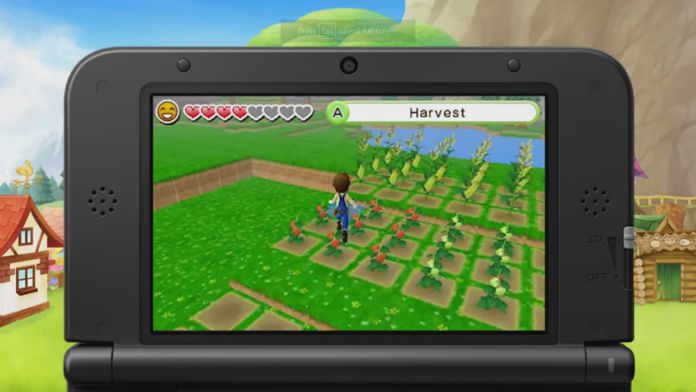 In Harvest Moon: Skytree Village, the villagers have stopped believing in (and in fact, remembering) that the Harvest Goddess even exists. With no faith left within the townsfolk population, the landscape has ultimately lost its farming luster and is now parched, dead land. As you might expect, your goal is to help rekindle that faith by restoring the Skytrees of legend. Along the way you’ll run across a cast of new characters (though a few are coming back for an encore). Players are free to make their farmer a woman or man and then select from a cast of respective bachelors and bachelorettes.

The multi-level voxel landscape is still present, but many small tweaks have been made to improve farming. There is now a pulled back “top down” perspective to get a better view of the land. More impressive, however, is the ability to hold down and increase the span of your digging/raising/planting/watering capabilities. A quick button press simply affects affect one square range while holding the button down increases the range. Of course, the range itself is determine by upgrading tools. The system is also intelligent enough to avoid expending resources if a square in the range is not in need of watering, seeding or the like.

As with each Harvest Moon title, there are also brand new crops and flowers to find, as well as new farm animals – most notably the adorable Poitou donkey. This cute creature can be sheared just like sheep. Fans of fishing will be pleased to know that there are new mechanics which allow you to expand the waterway. This leads to the potential of catching new, rare fish. It remains to be seen if these changes will be enough to lure straying fans back in, but it seems to be a better game than the previous two entries.

Interested in buying Harvest Moon: Skytree Village? You’ll have three purchase options for 3DS. Of course, you could just nab it on eShop, but there’s going to be two physical editions available. The cheaper of the two comes with a small pre-order plush (just as fans are used to getting with every other Harvest Moon game) while a pricier edition comes with a large premium plush. They’ve not revealed which plushes are specifically being bundled, but I have a feeling one of them has to be the new donkey species.