On a different spectrum from traditionally popular MOBA titles, NCSOFT’s upcoming free-to-play Action MOBA Master X Master operates like a MOBA in game mode structure, but controls more like a twin-stick shooter. While MOBA fans may find this a bit off, the amount of direct, hands-on control over moving a character with the WASD keys can be a welcome departure from the feel of playing something with a more disconnected point-and-click control scheme. Then there is MXM‘s TAG system, which allows a player to swap between two characters — called masters — in real-time. Sitting down with NCSOFT at E3, we were afforded some personal hands-on time with their action-oriented take on the MOBA genre.

Master X Master doesn’t immediately feel like a MOBA, instead it feels like an twin-stick shooter and action-RPG hybrid that just so happens to have a heavy MOBA-oriented gameplay focus. Starting off with the Fire Temple event stage, a co-op PvE mode, did a great deal to enhance that feeling too. Since the stage involves battling through a dungeon of different mobs and mini-bosses, only to do battle against an unlockable master at the end of it, players can use PvE to grind for loot and unlocks on their own. Using the newly featured mid-range attacker Taejin, and the AoE berserker Cagnazzo, getting into the flow of switching between two characters of notably different play-styles in the heat of the moment proved difficult to adapt to. But that was the price of rolling with two very different character types. After sections of a PvE dungeon, the game grades player performance and uses the grades to determine the level and rarity of loot players have access to when they prevail. PvE was pretty straight-forward, but served as a great way to practice characters without potentially being someone else’s problem if the practice goes bad. An added bonus, of course, is that there is at least loot at the end of it. As MXM is a multiplayer title, the PvE sections don’t quite stand out when all the other PvP modes will likely be more exhilarating than dungeon-crawling for loot. But the option is there and many will likely appreciate having it. 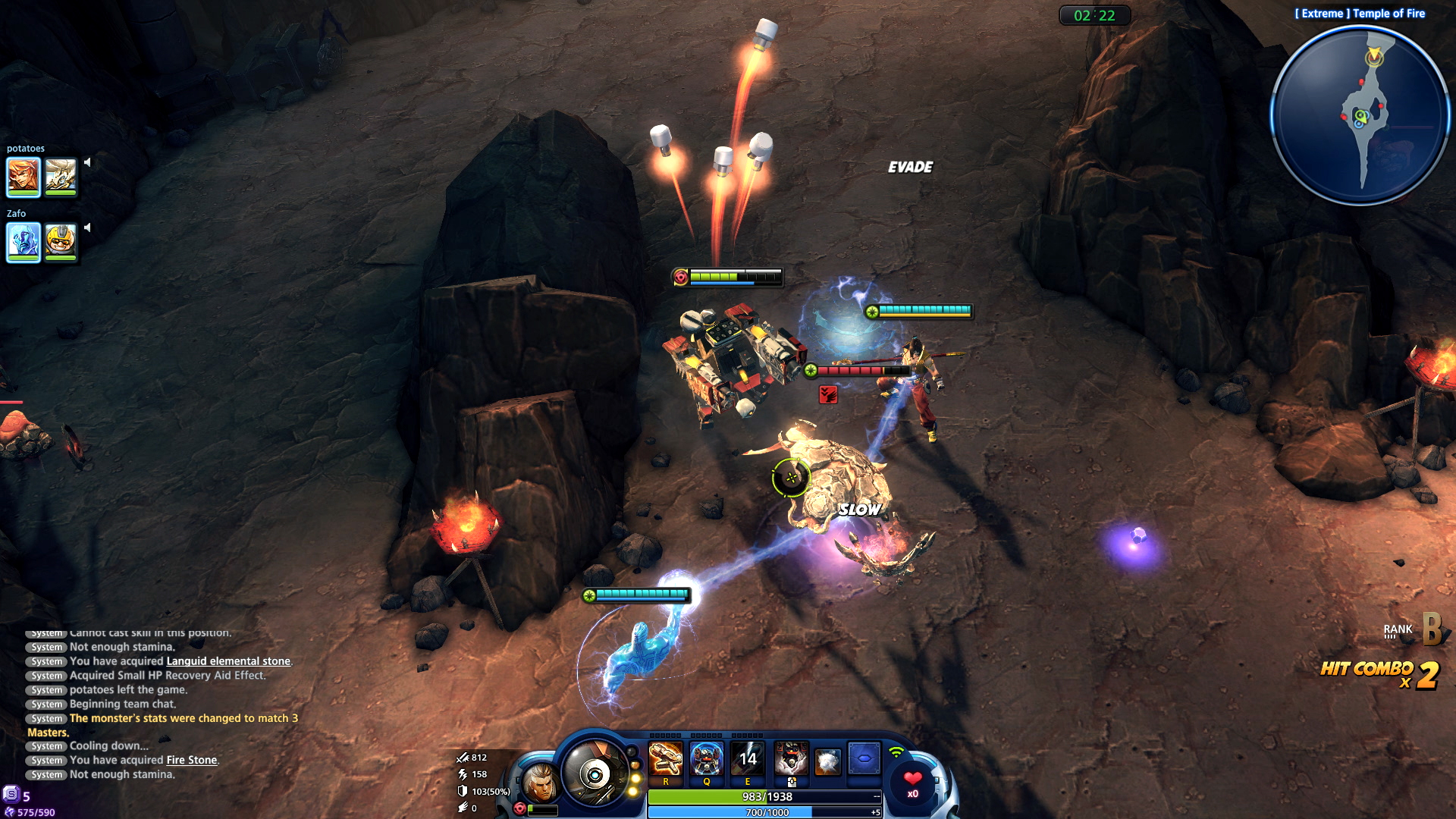 There is a roster of thirty characters, six of which were freshly available during the session. As an action-oriented game, dodging plays a big role in surviving. Characters have different stamina bars that determine the amount of dodging they can do before needing to recharge. Being able to dodge at all, and not having to just run out of the way, definitely makes any given character feel less vulnerable. On top of that, using the keys to move gives players access to a more active level of maneuverability in the face of skill-shots and precision-dependent ultimate moves. It all makes aiming and attacking less hazardous and defensive play easier to grasp. Of course, it’s also balancing nightmare to allow players simultaneous access to two masters at once. When a master is tagged out, their HP will slowly restore itself, so the strategy of knowing when to switch out masters and when to bear with it will no doubt play a large role in determining someone’s skill. It works like fighting games in a sense that even the switching itself is a tactical tool. When characters are switched, the master that’s tagged in has a few invincibility frames. Switching can be used as a last-ditch attempt to survive, especially since losing one Master means losing both. On the other hand, baiting a character switch would be a simple tactic for knocking someone out of the fight early on.

Without access to the more MOBA-like 5 vs. 5 PvP mode covered before, this experience was more about the 3 vs. 3 co-op PvP mode instead. With a smaller map, and more simple objective of just murdering each other, 3 vs. 3 PvP gets out of hand fast. Fortunately, dying nets access to spending points on skills and leveling up. Assuming players avoid near-instant death each time they spawn, fallen masters will come back stronger each time. When faced with just another pair of masters, the possible combinations of different masters becomes an interesting idea to toy with. After all, different masters are geared toward different styles of combat, so a match of six players equates to six basic styles of play with many more strategies and potential synergies on top of that. In many ways, the TAG system seems to grant a liberating degree of flexibility for each player. All of a sudden, the dynamic of a team is likely to shift suddenly and drastically. There is no sure indication on when a player will switch their characters for the first time, and that sees opposing teams entering battles with fewer unknowns than other games of the genre. Interestingly, TAG does not shift the balance of classes too much. Traditional team configurations still work splendidly, there’s just more of them at once. 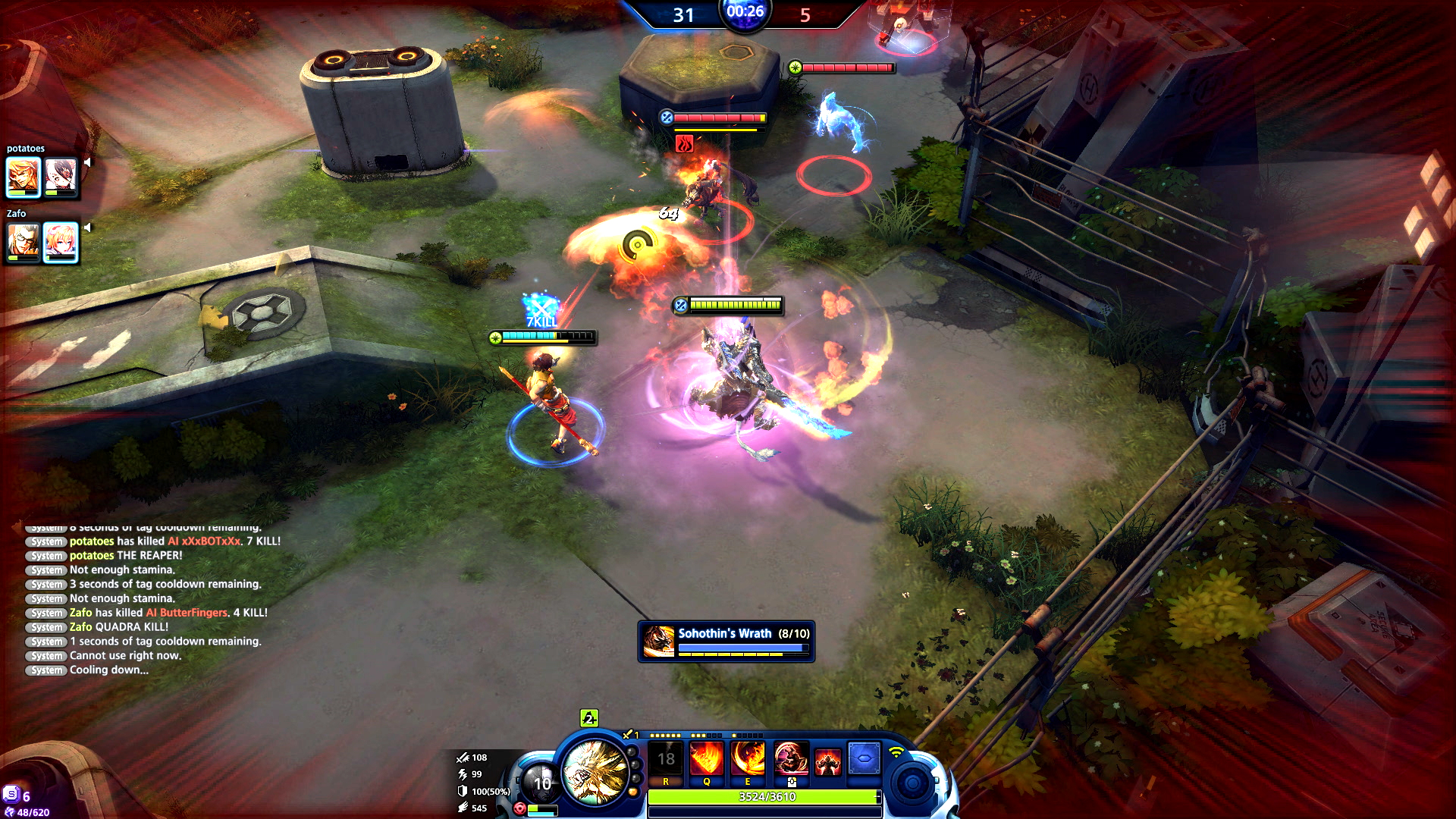 Master X Master is interesting at a mechanical level. As it is, MXM is shaping up to be a great option for people looking for something new out of their MOBA. The sense of control and involvement seems on par with the best the genre has to offer, but with the added bonus of a smooth learning curve. The strategic options will no doubt excite and intrigue players for a long time to come – assuming the balancing is on point. Nevertheless, it is still too soon to tell if MXM has what it takes to be the next big thing on the MOBA scene. Fortunately for those who want to find out, Alpha Playtest 1, the very first closed test, is taking place this weekend on June 24 through 27.