Ubisoft Montreal is one busy studio developing multiple games at a time. Tom Clancy’s Ghost Recon: Wildlands, Watch Dogs 2 and whatever the next Assassin’s Creed game are all in development at the studio, and it is also hard at work on Ubisoft’s first VR game. Eagle Flight is Ubisoft’s first foray into the world of VR where players take on the role of a bird of prey. While the concept is interesting, and could serve as a showcase for VR flight, we aren’t so sure the game’s multiplayer is going to be a good experience.

Eagle Flight takes place fifty years after the extinction of mankind. Wildlife has retaken the world, and you play as an eagle living in Paris. The game is gorgeous to look at, employing a vibrant, cel-shaded art style. Eagle Flight will have a single player mode that will be mostly used for training. Anyways, it wasn’t single player Ubisoft wanted to show off — it was the competitive multiplayer. 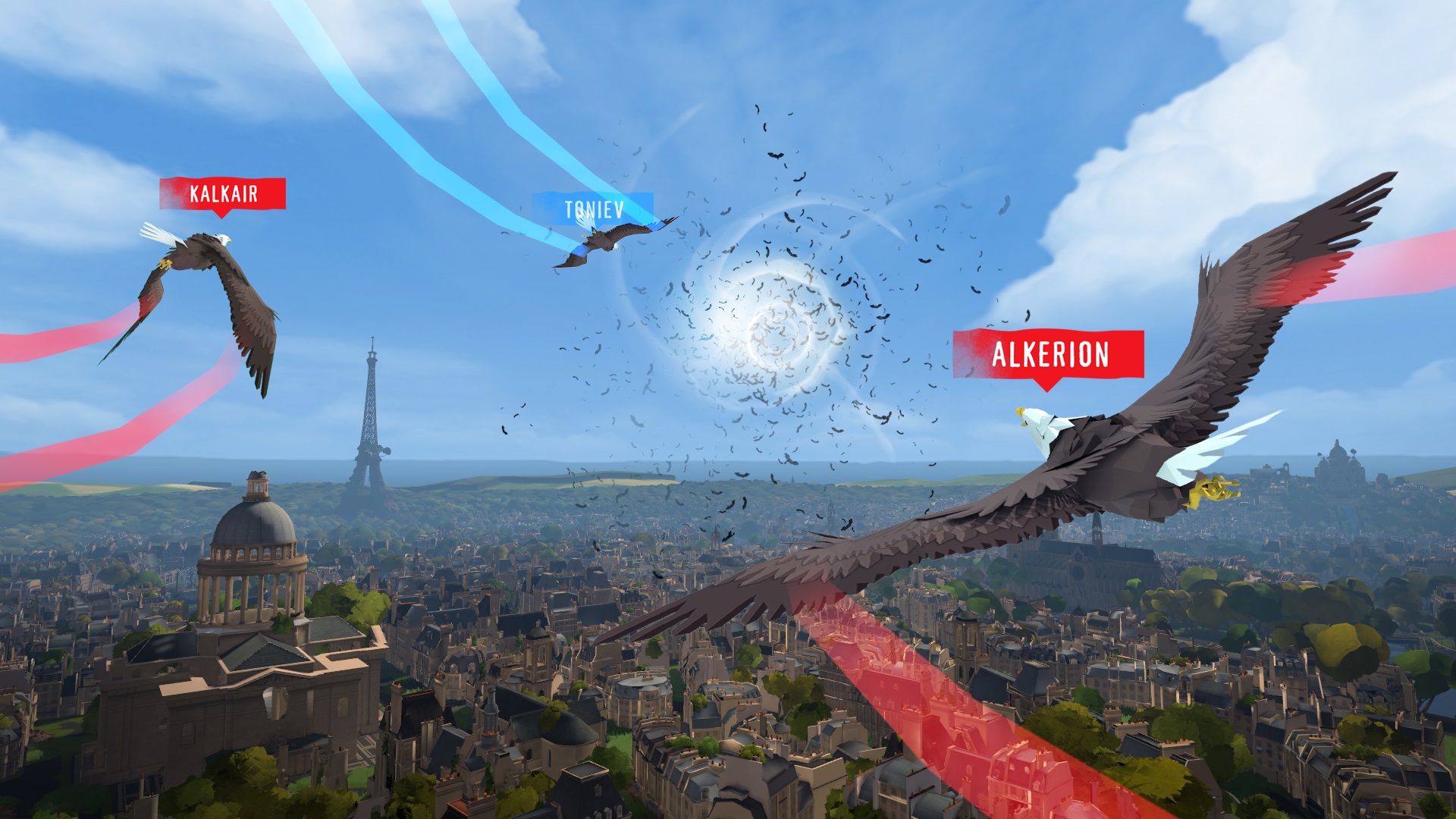 The demo began simply enough, each player was given a tutorial of the controls. Like so many other VR first-person games, moving the camera is done through head movement. Moving left and right, and up and down would send the eagle in the corresponding direction. Sharp turns require the player to move their head so far back that it touches their ear. Bumpers on the controller were used for acceleration and deceleration, while the buttons were used for the screech attack. It’s hard to deny that cruising around Paris was fun. Eagle Flight didn’t start to fall apart until the multiplayer began.

Having completed the tutorial, the 3vs3 multiplayer match began. The game mode was capture the flag, though a tender rabbit replaces the flag. Things began well with the different eagles zooming in between the buildings and dive-bombing into trees to capture the delicious morsel. Then, however, the combat began, and that’s where Eagle Flight lost us.

The screech is Eagle Flight’s only projectile, and everyone goes down in one hit. This wouldn’t be a problem if it wasn’t so difficult to aim. Unlike Rigs, which also uses head movements for the camera, aiming in Eagle Flight is rarely accurate. You could be looking directly at the enemy from behind, release a screech, and completely miss. Eagle Flight’s aiming needs some tweaking, or Ubisoft could allow players to use the right analog stick or give us an aiming reticle. The current system works well for single player where you’d be soaring around the city. For a competitive multiplayer mode, though, extra precision via a joystick or mouse/keyboard would be much preferred. 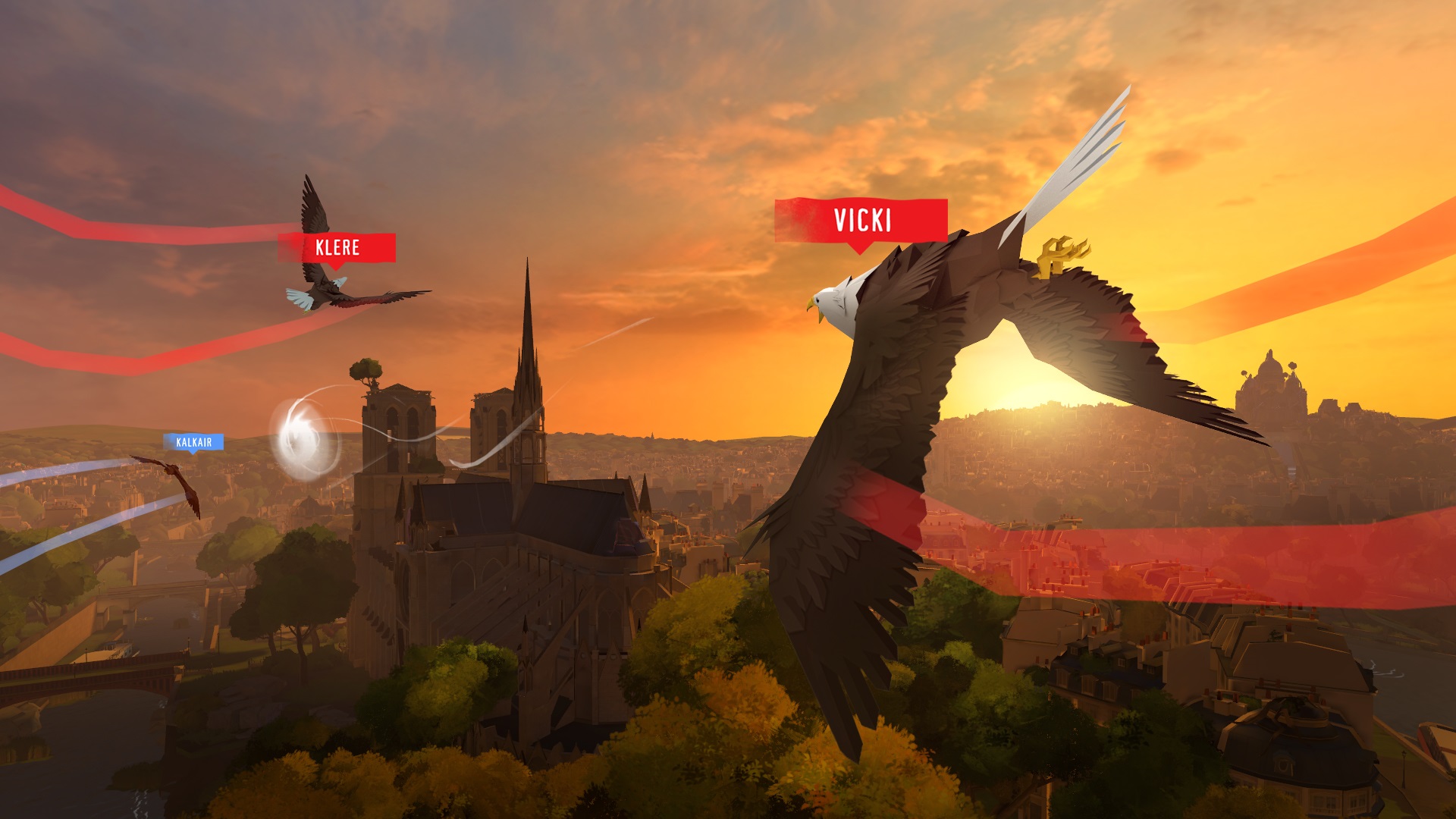 What can be said about Eagle Flight is that Ubisoft has put in a lot of time and effort to making the gameplay feel fast, but not cause motion sickness. Even though you’ll be traveling at breakneck speeds, there’s only a rare chance you might actually get motion sick. So yes, Eagle Flight not only looks good but runs very well.

It’s hard to tell just how viable Eagle Flight is as a game. We know there’s a single player mode, but there isn’t going to be a story. We know there will be competitive multiplayer, but we don’t know how many modes there are going to be. On top of this, we have the game’s aiming issues, which feel out of place in a competitive “shooter.” Ubisoft still has plenty of time till launch to make announcements and tweak the gameplay. Everything that Eagle Flight is currently doing, there’s a VR game doing it better.