French adventure game developer Microïds have been in the adventure game business for a while and they’re still going strong. One of their most well-known series, Syberia, had its second entry back in 2004. Now, nine years later at E3, Microïds showed off gameplay straight from the latest entry in the Syberia story with Syberia 3. Set only one month after the events of Syberia II, Syberia 3 sees series protagonist Kate Walker holed up in a hospital in Valsamborg that won’t let her leave. With the primary objective of aiding her nomad friends, the Youkol, on their seasonal journey to the sacred steppes, Kate gets mixed up with an alarming amount of truly hateful people whose only objective seems to be putting an end to her Youkol friends.

The E3 gameplay demo of Syberia 3 starts at the beginning of the game, with Kate in a hospital, left to escape and gather information on what is happening. The game runs with some nice rendering effects, and a slightly cartoony aesthetic. The animations and lip-syncing are not quite ready yet and the characters don’t quite seem to be looking at what they’re facing, but overall, the game’s visuals hold up well among its contemporaries in the genre. As an adventure game, Kate’s got to search her surrounding for clues and solve puzzles of varying types to progress. In this case, it was simply escaping a hospital room. After speaking to a fellow captive, an injured Youkol she met in the previous game, Kate was able to find various tools in the room – including a knife – which she could use to pry open the electronic lock on the door and rewire it. 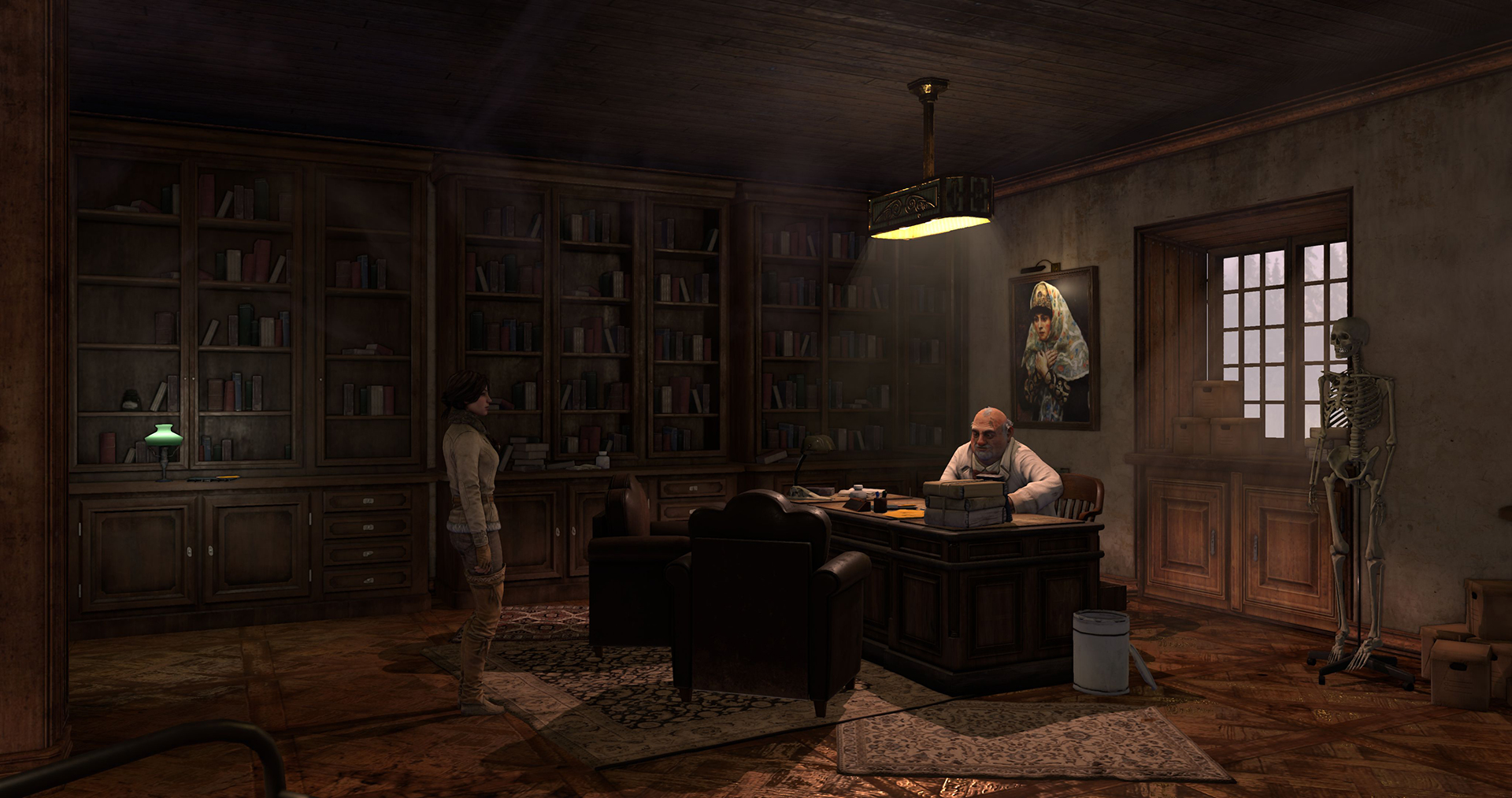 Of course, unlocking the door was a puzzle that required careful examination of the lock itself, smart use of tools, and some manual doing to solve. It all came together pretty well and was fortunately not too straight-forward in a way that hardened adventure game fans can appreciate. Once out, players could then access a larger circular room full of other hospital patients. Speaking to the patients yields information that will serve to help in future puzzles and even conversations. The demo then took Kate to the resident Psychologist’s office for an interview and evaluation. This played up like a conversation puzzle, where the player could speak defensively with carefully constructed lies. After all, the objective was to leave the hospital, and the Psychologist was a little sketchy. Kate can escape the hospital in different ways, exploring various parts of it and uncovering its devious secrets. Syberia 3‘s challenges seem to tie into each other neatly. There are conversations which can be failed in a sense, as conversing smartly can make later sections of the game easier. The game’s composer, Inon Zur, worked closely with the developers to add an often-subtly rising score to the puzzle sections. In every puzzle of the game, the music rises in intensity and changes the farther the player gets in solving it. It’s pleasantly clear that Syberia 3 is shaping up to be a fine adventure game with its own interesting identity. But with just a vertical slice look at the game, it’s still hard to say if it can keep up that sense of mystery and pace for its 12 to 15 hour run-time when it’s out on September 1. 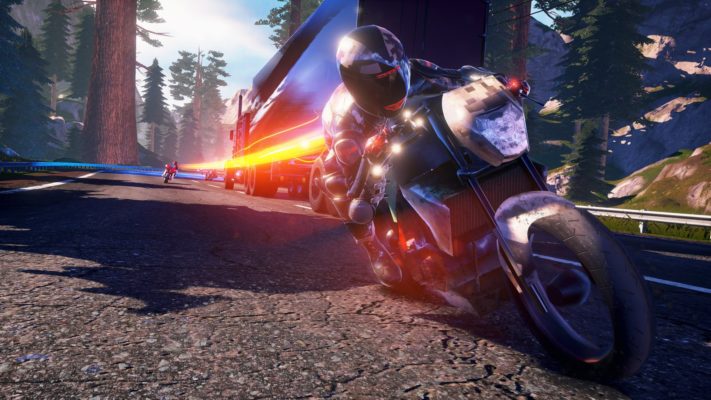 Shifting gears, Microïds brought out Moto Racer 4, the latest in the arcade motorbike racing series. Moto Racer 4 uses Unreal Engine 4 to achieve a clear level of visual fidelity and performance at sixty frames per second. The game goes for plain fun with a designated drift button, boost, and even a competitive push button for knocking people about when they get too close. Targeted at a slightly more laid back audience, the game will feature local split-screen which will be great news for anyone out there who still believes in playing games with more than one person on the couch. Of course, the single player experiences aren’t dull either as even the AI racers like to send messages and taunts. Most interestingly, Moto Racer 4 will feature PlayStation VR support as well. At the moment, that is the only VR support the game’s confirmed to have but there is still some time leading up to, and after, the game’s release to work something out. Moto Racer 4 will see official launch on October 13 for PlayStation 4, Xbox One, PC and Mac.

Changing over to another adventure title for the final bout, Microïds brought out Yesterday Origins, a sort of sequel and prequel to their previous adventure game Yesterday. Taking on a beautiful comic book look, Yesterday Origins talks about the origins of main character John Yesterday and his immortality. Both John and his lover Paulina Petit are immortals. But to set the tone of the story, John and Paulina’s immortality still lets them age – but when they die, they just come back to life as the way they were when they first became immortals. Since being immortal does not relieve them of vanity, the couple takes advantage of their gifts in darker ways. Case in point: Paulina shoots herself when she finds her appearance aging past her prime. Unlike Paulina, John loses his memory when he resurrects which, of course, presents a problem with his past. The gameplay presentation at E3 primarily took place in a flashback into John’s past experiences around the time of the Spanish Inquisition. It found him locked in an underground cell, with a large pig chained to the wall, and a rude guard outside. 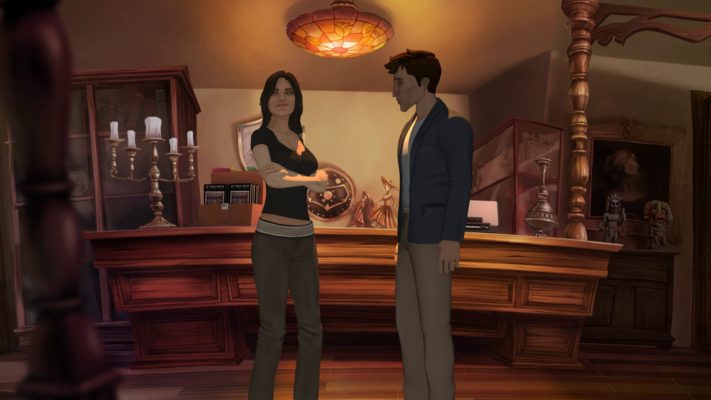 Fans will likely enjoy the game’s darker tone and humor, as the pig in the cell was chained to the wall because of its fondness for human flesh. Fortunately, John had a benefactor who offered him aid from the surface. The matter was escaping without rousing suspicion or even the idea that he was gone. So John’s benefactor drops a corpse to his cell. Using the surroundings, items lying about and a fireplace in the cell, the puzzle played out in a sort of Monkey Island-style sense in that it wasn’t apparent how all the pieces should go together. John can combine different items, and as the camera stays relatively put, close-ups on objects are rendered as interactable comic panels. To encourage clear thinking over lazy experimentation, the game forces you to choose what the general purpose is for an item combination as the final step of combining them. So if a player has no idea what they plan to use two items together to do, the game won’t let them do anything with those items. As such, the game rewards careful and creative thinking. But while solving a puzzle via careful planning and thought is exactly what games like this should encourage, Yesterday Origins does have some odd puzzle solutions that players may be hard-pressed to figure out. Basically, the demo saw John faking his death using the corpse, crafting and slipping the guard a hallucinogen, and using the pig as nightmare fuel to make said guard think John was murdered by a demon. It sounds a bit crazy, but despite the leaps of logic someone will need to take to reach that point, players may find getting through Yesterday Origins‘ puzzles surprisingly devious and even satisfying as a result. Hopefully, progressing through Yesterday Origins won’t require thinking that’s too obscure throughout its twelve-hour playtime as it releases sometime in September.