To those already indoctrinated with the knowledge of Rally motorsport, WRC 6‘s additional race events and improved physics will probably sound like a convincing argument to get into the latest officially-licensed World Rally Championship title. Outside of a family member’s interest in motor-based sports in general, personal knowledge on rally racing has been admittedly thin as of late. But that can be as much a blessing in disguise; sitting down within publisher Big Ben Interactive’s surprisingly cosy show-floor booth at this year’s E3, as a representative from French-based developer Kylotonn passionately, but in an understandably straight and clean fashion, laid out what changes the team had made to this year’s release.

And a community-led slew of changes it’s proven. Gone are the worries of a lack of longer-running courses; gone are the previously non-existent knocks and tumbles when colliding with an ill-timed corner or curve. Improved are the game’s textures — in one extreme, swathes of chewed-over Earth, in the other smooth gravel. Same goes for the contextual simulation of specific surfaces on your rally car’s tires, adding further tactical decision-making on how fast you accelerate or how early you might attempt a corner. 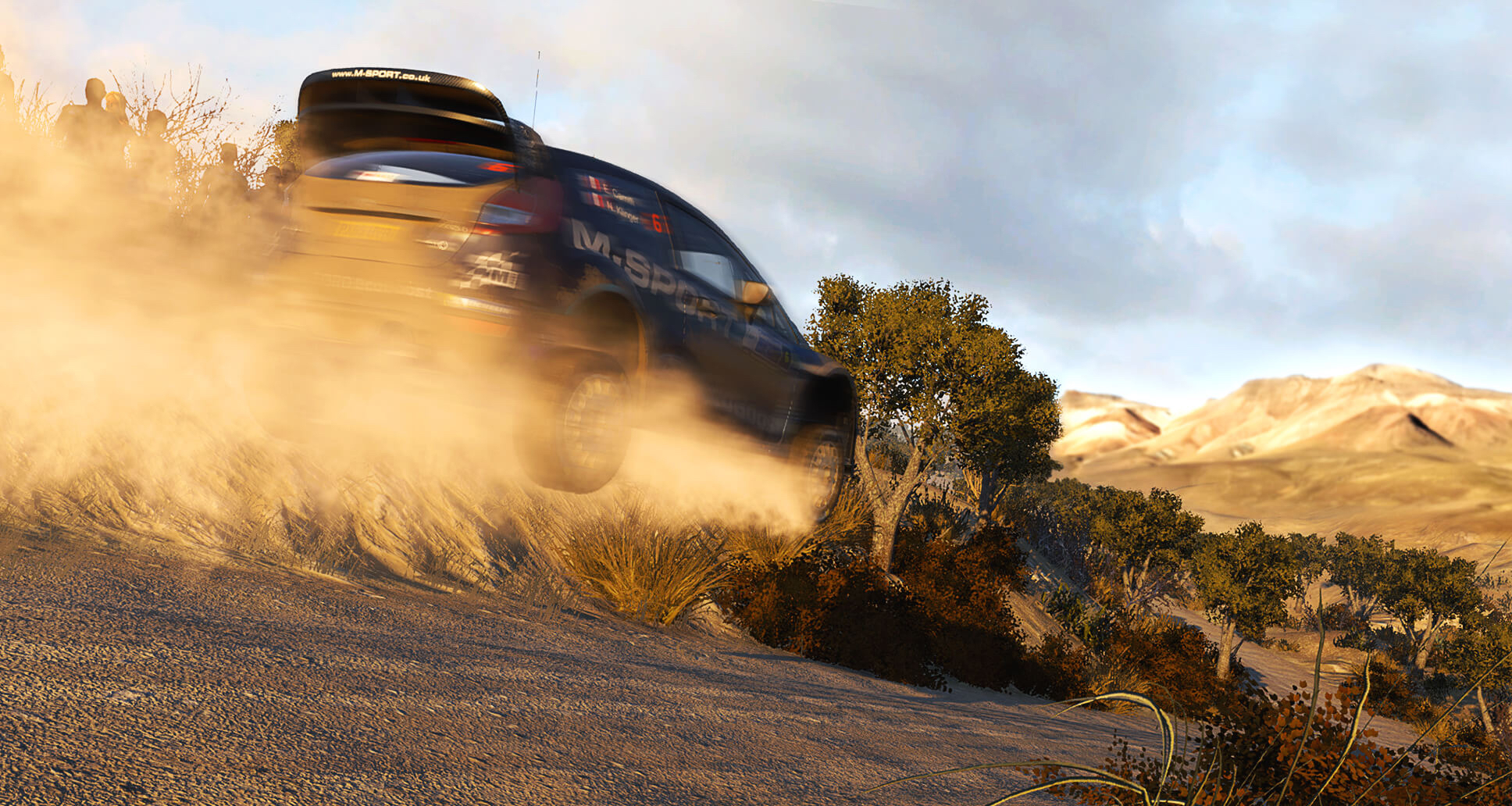 The additions to WRC 6 may prove to be lesser in amount, but their presence is no less affiliated to the way your vehicle reacts to both acceleration of the car and the very nature of the track itself. Even the smallest of corners and/or least challenging turns can have disastrous consequences and it’s clear the simulation side takes centre stage over any arcade-like elegance of interface. Be it the shaking of the dashboard when hitting a road at an angle, the vibration caused by said collision, even the general activity and atmosphere away from the track itself — from crowds to structural locales alike — breathe new life into WRC without over-exaggerating on the littler details. Another notable, if seemingly lesser, inclusion is the choice of enabling/disabling advanced commands for those who might be new to the series and feel dumbfounded by the continual blurt of “left turn steady, right turn avoid cut!” by your co-driver.

On its own, WRC 6 looks and feels like a respectful step-up from its previous iteration. With the improved interface, expansion of player choice and notably higher physical challenge, the latest rally sport racer plays rather well on console, striking a careful balance between physical simulation and arcade-like endeavours to get the fastest time. But that’s not all there is to this year’s outing. 2016 sees the series make its full debut in VR and with a giant hydraulic seat, steering wheel peripheral and head-set taking up one corner of the booth, it’s rather pleasing to report that, played in VR, WRC 6 is so astonishingly captivating, it wouldn’t be that farfetched to suggest the ‘standard’ (or perhaps non-VR) version feels far less devoid by way of how much is gained from the latter option.

Now that’s no offense to what was shown beforehand; obviously there are two versions being released and the standard iteration certainly plays and feels just as satisfying. Even when the player does, inevitably, mess up on that sharp corner or misjudge of acceleration. But playing a rally game in VR and getting that true surrounding experience of sitting behind the dashboard, to avoid sounding rather cliche, really helps to break down the barrier between the reality and the simulation of driving. As noted, the VR equivalent is helped enormously by a fully hydraulic seat — complete with acceleration/brake gears and a steering wheel peripheral — but even without that external stimulus constantly reminding you of the vehicle’s raw power and the track’s differentially shifting quality of the surface below, it’s the genuine visage put before you that strikes awe into meagre human eyes. 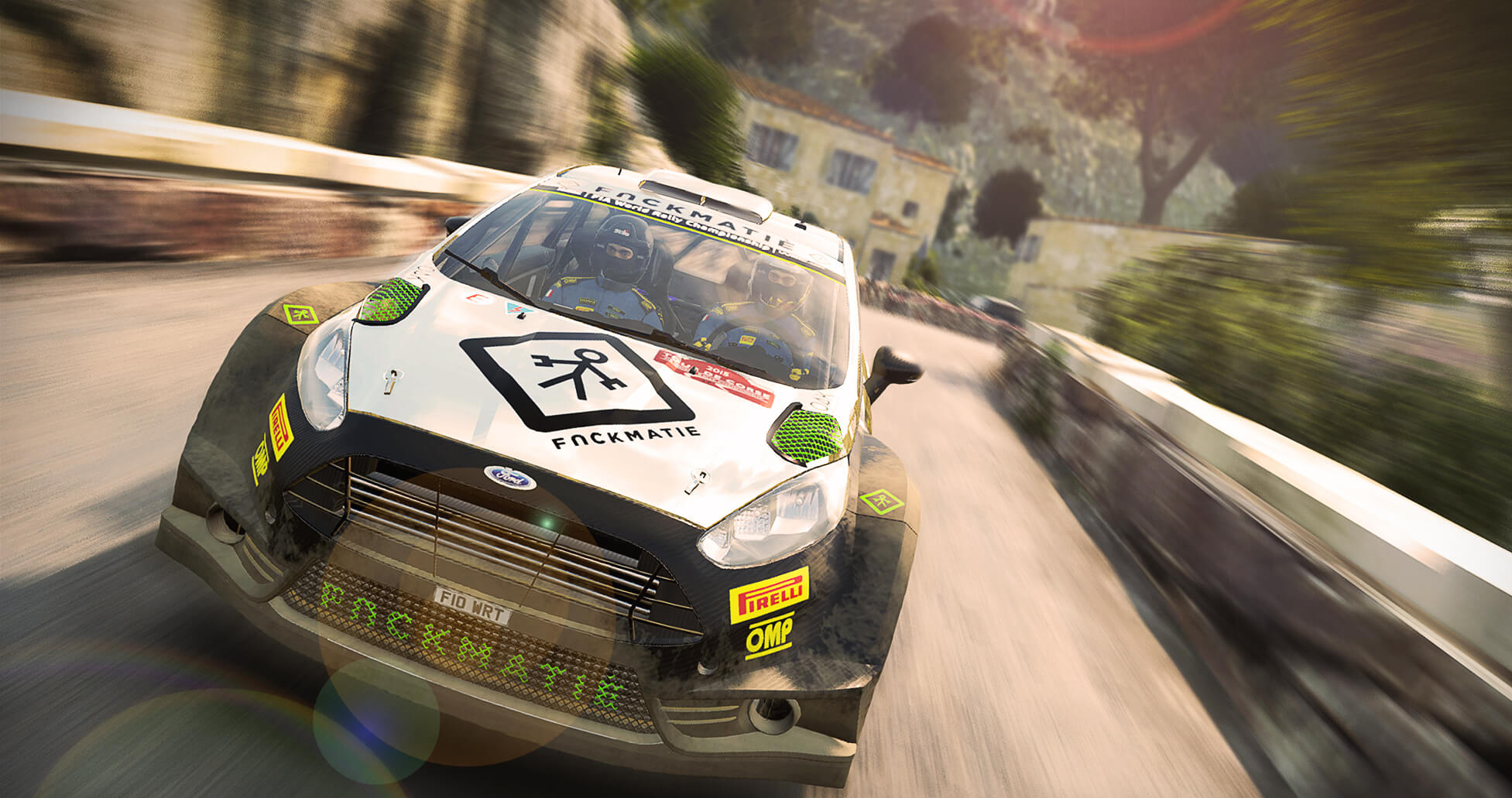 It’s the lesser substantial additions in, for example, turning your head to preview an incoming corner or getting that added visual sensory to the quality of road surfaces that pulls you further into the emotional uncanniness of genuinely being in a game. Sure you can’t see your [virtual] legs (an unthinkable crime committed by umpteen first-person games), but by the time you’ve given a quick look-over of your surroundings — your seat, your co-driver, the entire front half of the interior for that matter while still getting curiously cheeky shots of the back-seats too — something in your brain instinctively has to remind you that this still lies in the realm of simulation. And by extention, not real.

But I’ve had the pleasure recently in playing some VR games that do justice in using aspects like space and layout to, when it comes down to it, half-trick our most kiddish of imaginations to think…if for a seconds…that we’re generally a part of all this. And a rally sports game, in hindsight, seems like the perfect fit — albeit a fit that contains some possibly costly peripherals. Even so, head-set alone, WRC 6 has been an absolute joy to test the VR waters with and while the genre may well be confined to niche interest, it hasn’t tainted my view on VR from a potential stand-point. If anything, Kylotonn — together with Bigben’s backing — have only gone and strengthened that argument that VR, most certainly, has a place in video games.