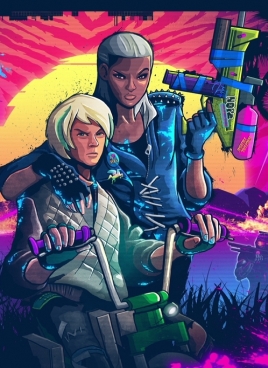 Trials of the Blood Dragon

The Trials series has been testing the mettle of console gamers for seven years now. Originally released on PC, the franchise really bolstered its popularity on the Xbox 360 with two well-received entries. Beyond being incredible graphical showcases for the Xbox Live Arcade service, they also featured some of the most robust creation tools on the market at the time and gave players a lot of value for their money. Trials Fusion brought the franchise to the Xbox One and PS4, while also giving PC owners a chance to experience the greatly-improved physics engine.

E3 2016 saw Ubisoft not only announce Trials of the Blood Dragon, but release it that day as well. Unlike the launch of the Saturn coming right after E3, this hasn’t been a complete disaster. Instead, it led to people going crazy and being excited about a stealth release for the first time in ages. E3 alone had tons of leaks beforehand and yet there was no word of this coming out ahead of time, so it gave Trials of the Blood Dragon a fairly big boost in interest. Instead of wondering when you could play it, the only barrier you had after seeing the trailer was fifteen bucks — thus making it a great impulse buy as well.

Trials of the Blood Dragon fuses the Blood Dragon ’80s-infused stuff from Far Cry 3: Blood Dragon with the hub system of the mobile-only Trials Frontier and changes things up in ways that players honestly would have never anticipated based on the history of the franchise. A narrative has been added to provide some context for all of the insanity, and as the teenage kids of a deceased secret agent-type dude, you’re out to stop bad guys from getting Blood Dragons. As a result, you’ll be doing far more than “just” driving motorcycles this time around. In order to stop evil, you will need to make use of things like RC cars, guns, and platforming skills. This is the first Trials game to formally go outside the boundaries of a motorcycle game — although the creation tools did show that non-biking things could easily be made with the game engine.  Guns add a new dimension to the gameplay, but also a level of needless complication to the core mechanics. Trials is all about physics at its core. Trying to balance the bike alone against the various angles you’ll encounter is already a challenge on its own – but when you try to do that and shoot enemies, it can be overwhelming. The platforming sections are also trickier than they need to be and quite frustrating. 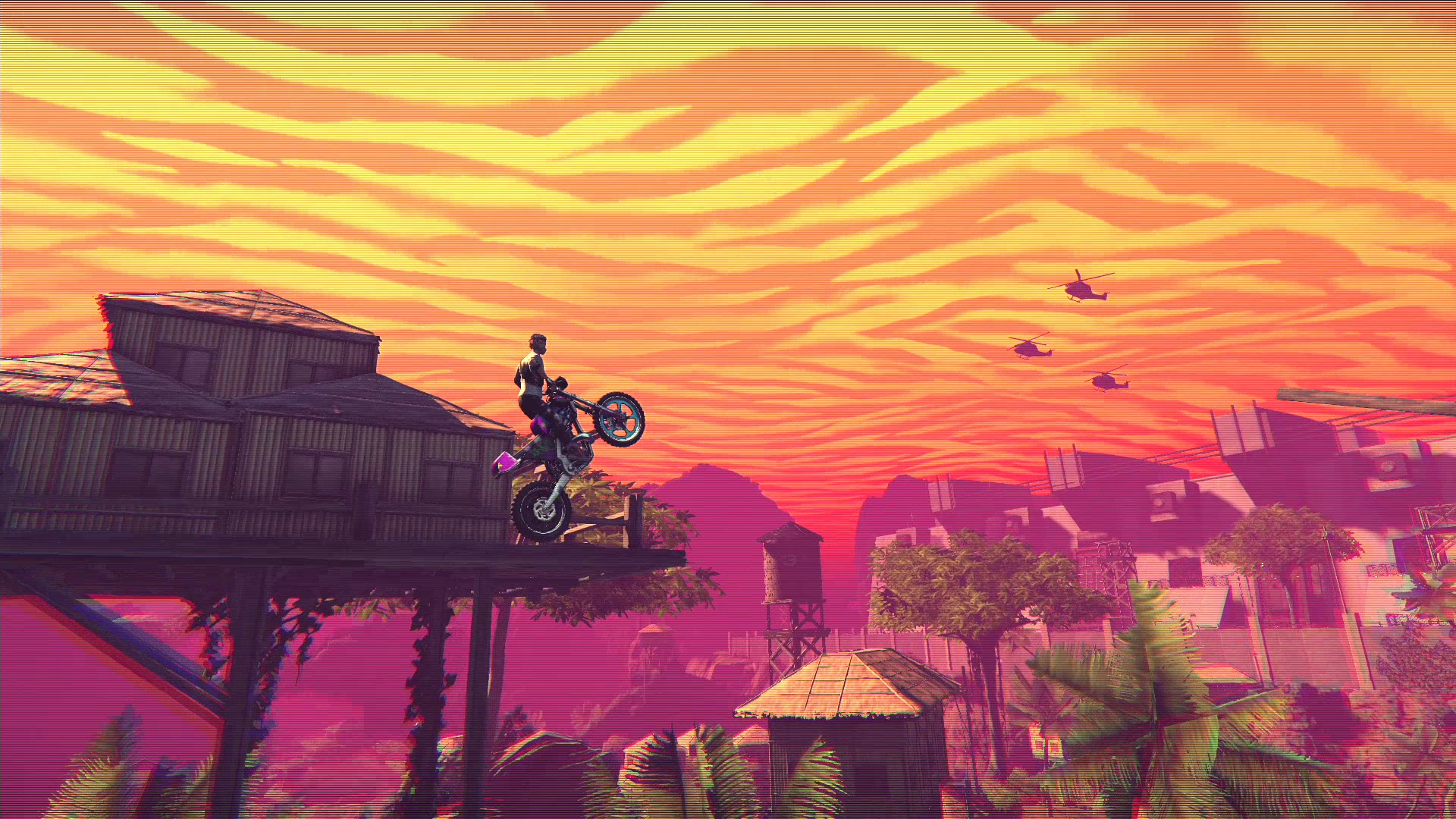 In most normal platformers, you’ll have some indicator of where you are in relation to your environment. Shadows are the best way to do this, and give you an idea of your exact position. Sadly, they are completely missing here – so you’ll frequently wind up missing jumps and either falling short and having to redo sections, or dying over and over for jumps that are about on-par with level 1-1 in Super Mario Bros. While it’s usually good to see long-running franchises try something new, and the expanded gameplay does give you more variety, it wounds up hurting the overall package.

With all-motorcycle gameplay, you wind up with a top-notch experience for that genre. However, by mixing in other things that the folks at RedLynx aren’t as experienced or as good at, players wind up with a worse experience. Trials of the Blood Dragon definitely has the most varied gameplay in the franchise, but the shooting action doesn’t feel nearly as polished as it should be given how many stages feature it. The platforming sections are even worse, since they blend in both shooting and platforming — merging two things together that don’t work well on their own, and work even less when placed together. 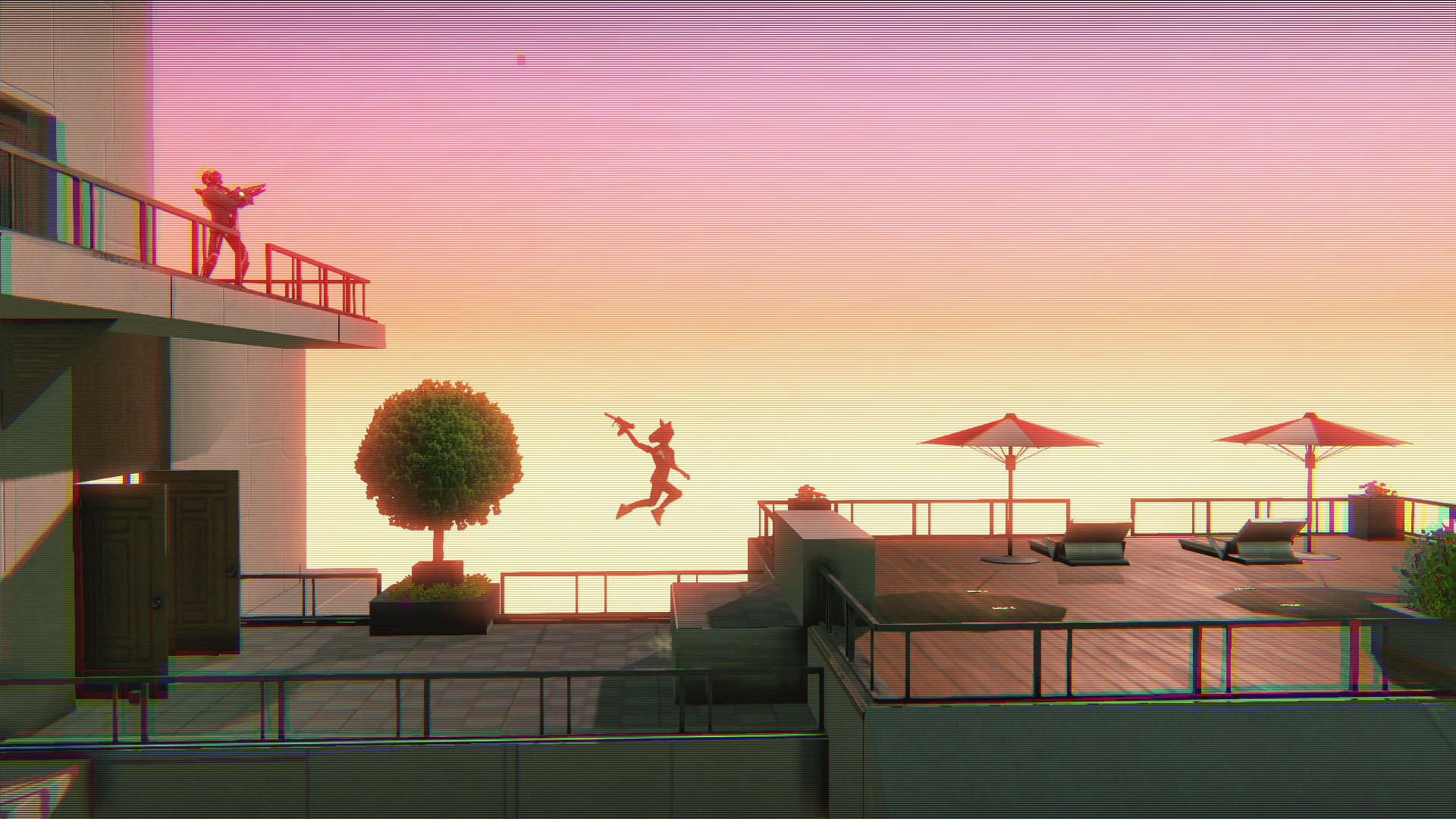 Players wind up with a game that should be an absolute blast soaked in ’80s nostalgia, but get something that is more frustrating than fun due to the over-reliance of sections that the developers just aren’t well-suited to create. The super-tight controls for the motorcycle sections is gone for the on-food portions. Instead of doing exactly what you want, when you want to do it, you’re hamstrung. There’s a bit of input lag for jumping and movement, and nothing feels as tight as it should. The gun portions are slightly better because it only uses a right stick to aim and shoot at once– but it’s not as polished as it could be.

It’s at its best with vehicle-based portions. The motorcycle action is as good as ever, and added things like RC cars, tanks, and mine carts give it some new wrinkles. The physics-heavy gameplay remains enjoyable even if the core concept has been watered down so heavily. By trying to appeal to a wide variety of gaming fans by delivering so many kinds of gaming, it’s hard to determine just who will be pleased by the end result. Shooting and platforming fans have better games to try, while the motorcycle portions of the game take up a reasonable portion of the game’s length, they also feel a bit too short compared to all the other content that winds up feeling like filler. 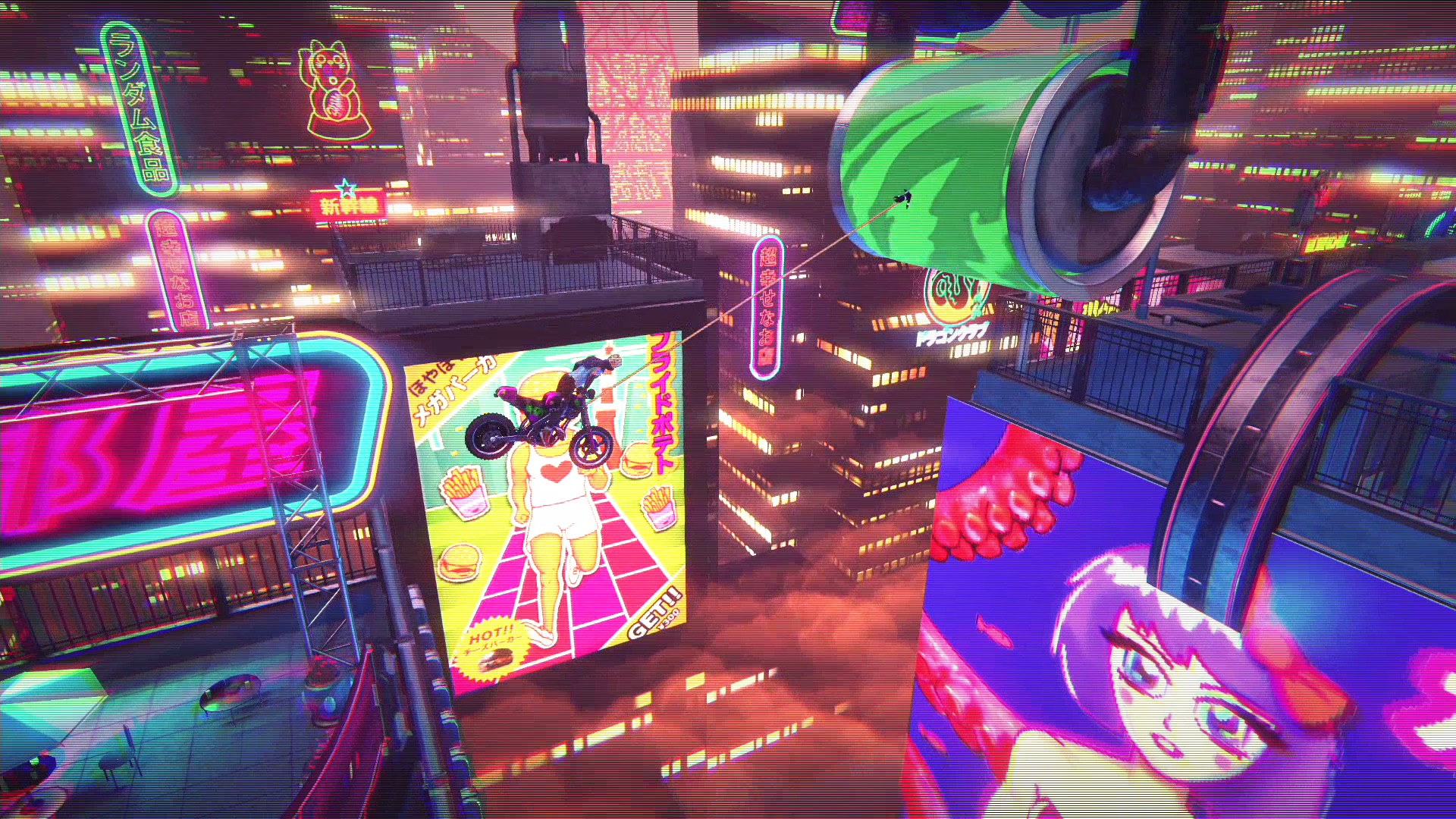 Visually, the neon-soaked world of Blood Dragon remains true to what we saw in Far Cry 3‘s incarnation. The lighting effects will dazzle you and no matter how much time passes, neon will remain an impressive thing to see in a game. Unfortunately, nothing about this game really takes advantage of the hardware beyond the lighting. The character models and environments don’t look all that much better than the other games — and this one zooms out the camera so much that it can be needlessly difficult to figure out where you are in relation to your current area and your landing point off a jump. Animation for the biking sections is solid, but looks very jerky for the on-foot segments.

Fortunately, Trials of the Blood Dragon is a fantastic game to listen to in every way. The voice acting is just the right amount of silly and serious, while the music is perfect ’80s rock and gets your blood pumping. 90% of the game’s music would be fine during the end credits of an action movie, and that suits the tongue-in-cheek nature of everything nicely. Crashes are still bone-crunching and you’ll feel every hard landing — especially if you’re playing with a good set of headphones. 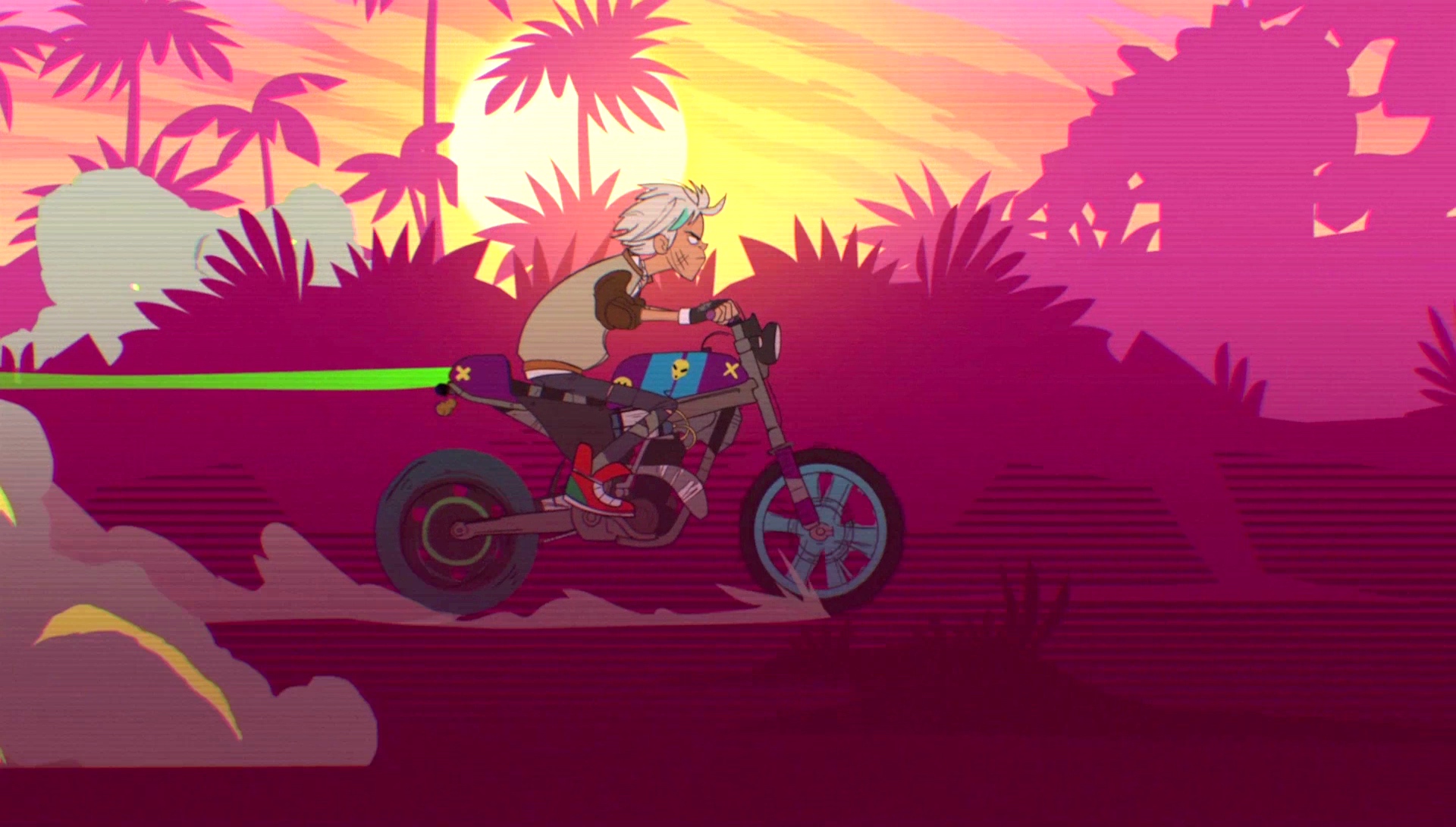 Trials of the Blood Dragon is a tale of many games. As a motorcycle driving physics-based game, it’s fantastic. The problem is that it isn’t that kind of game as often as it should be. The on-foot portions with either shooting or platforming simply don’t work as well, and while having clunky, but fun, mechanics might have worked if they were an additional part of the package made by fans, that doesn’t cut it for the core game. For a concept that is all about having fun and crafting a love letter to the franchise’s fans that grew up in the ’80s, this isn’t as fun as it should be. It’s far from bad and that’s frustrating because you can see it achieve great heights — it just doesn’t do it as often as it could if they fine-tuned the concept instead of trying to throw everything into the stew at once.