There’s been a lot of mention of Tenchu recently when writers have come to draw reference to — or perhaps maybe help identify — Aragami, developer Lince Works’ latest third-person stealth title. While the two titles may share a similar premise on being predominantly Eastern in setting, there’s so much more to this most recent of Japan-focused, historically-leaning aesthetic that stands out than merely gameplay alone. The intrigue was felt leading up to actually playing in person on the E3 floor at Sony’s [once again] dominant show of indie prowess, but it’s great to find a game that still manages to throw up additional surprises not already presented in the preceding trailers beforehand.

Though Aragami is, at its heart, a stealth game — centered around the one-chance, do-or-die approach to avoiding detection; you get spotted, you’re pretty much dead barring one heck of a good reflex — Lince Works are so evidently focused on far more than just the gameplay to impress. Be it the cel-shaded art-style that plays out like a painting brought to life — albeit one that doesn’t dabble too indulgently with a loft of color — or the presence of an interface/screen furniture (and thus total lack thereof), Aragami on the surface treats the all-rounded mantra of a stealth game rather well. That, for a genre that is often so tightly focused and reliant on the more slower and tactically-bound decisions, the game is certainly one in refusal to cascade ample amounts of details and info into the player’s forefront. 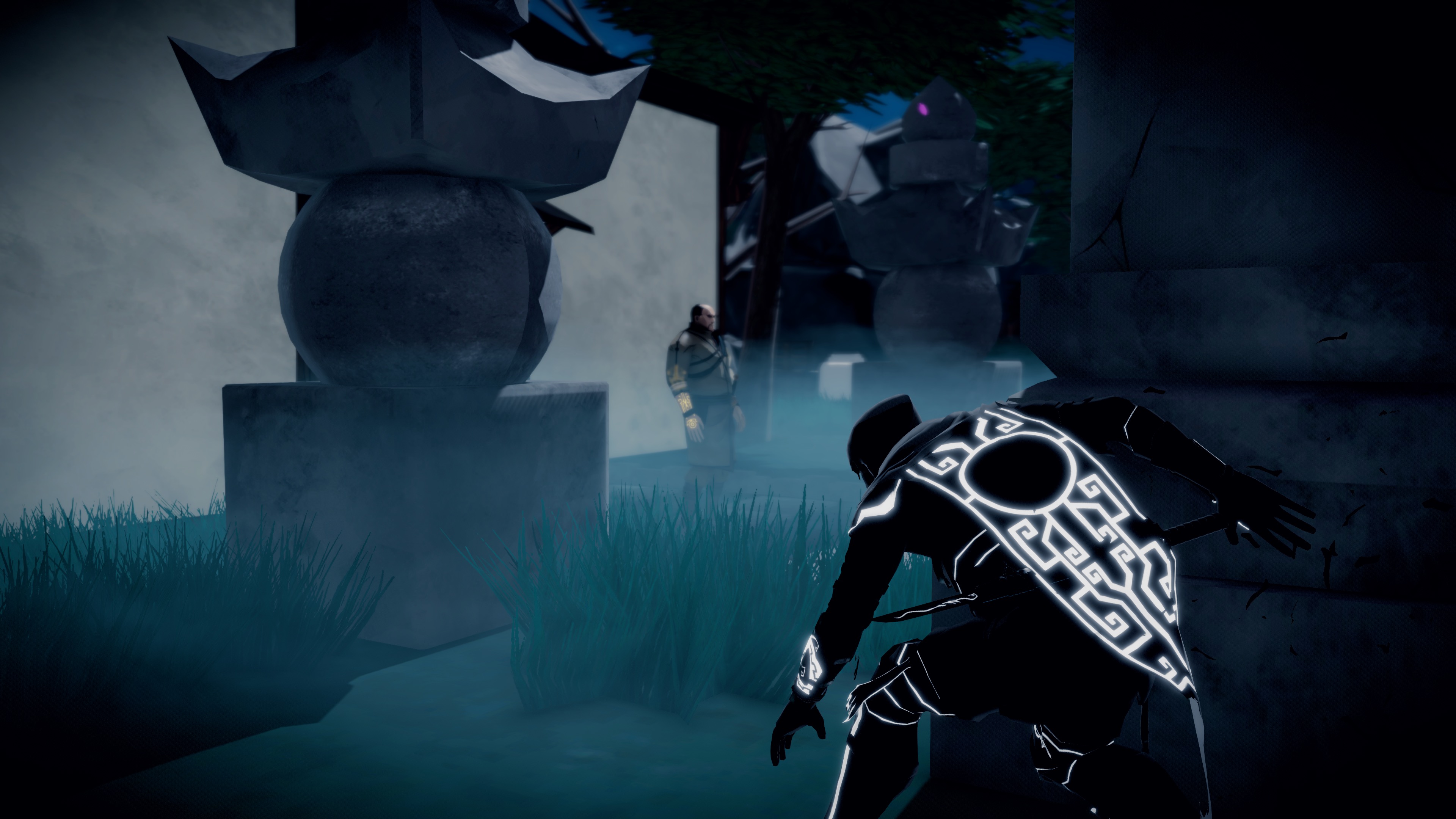 As such, Aragami is a graceful and perhaps eloquent type of stealth game. Not unlike the generally tactile premise governing most stealth experience, but the pastoral limit in its colors — cool blues and nightly greens mixing well with the gameplay’s governance of light and dark shades — adds a rather more visual appeal to the game’s already simple-but-effective play-style. Aragami centers around the titular [amnesiac] ninja having been brought back from the dead by a mysterious maiden tasking you with saving her from the Kaiho, the army of light. Equipped from the get-go is the ability to manipulate and even create shadow, allowing you to traverse in a near-invisible state across the game’s multitude of shrines and courtyards alike.

Your abilities are limited however; regenerative, but only when back in shadow. Meaning that a bad decision or ill-timed move could have you standing it vulnerable in the light for soldiers to spot you. Even then, your near-invisible state doesn’t always guarantee protection, but this is partly countered by your secondary skill in being able to teleport between shadowed areas — a risky situation or possible death potentially avoidable if the current scenario is read the right way. You can of course silently assassinate your enemies or pass them completely, but the benefit is that neither option seems to produce any easier an objective. Kill your enemies and you risk their bodies being visible; avoid combat altogether and, coupled with the large number of hostiles and the rather limited presence of shadow/safe areas, the challenge to stay alive remains ever high.

Indeed, Aragami is one game you cannot take lightly or underestimate despite its simpler, stripped-back level design and its impressively fluid movement when shifting between shadows. Enemy placements are cleverly put with few soldiers offering easy static-posts — often covering most-if-not-all ground you can possibly tread. If there’s one area that’s [only just] more satisfying than passing through without detection though, it’s the immediacy and variety at which one can feasibly teleport. Between floor and wall; from a precarious pocket of shadow to an overhead beam amidst brightly-lit interiors. Providing it has shadow, and you’re in close enough proximity, you can move there. From a technical stand-point — minus a few unfortunate bugs that cropped up when activating shadow powers to phase through gates or doors — Lince Works have done a great job at simulating and thus translating the hand-brushed, watery art-style to Aragami’s very movement and even in moments of tension, there’s little grace lost in how the game plays out. 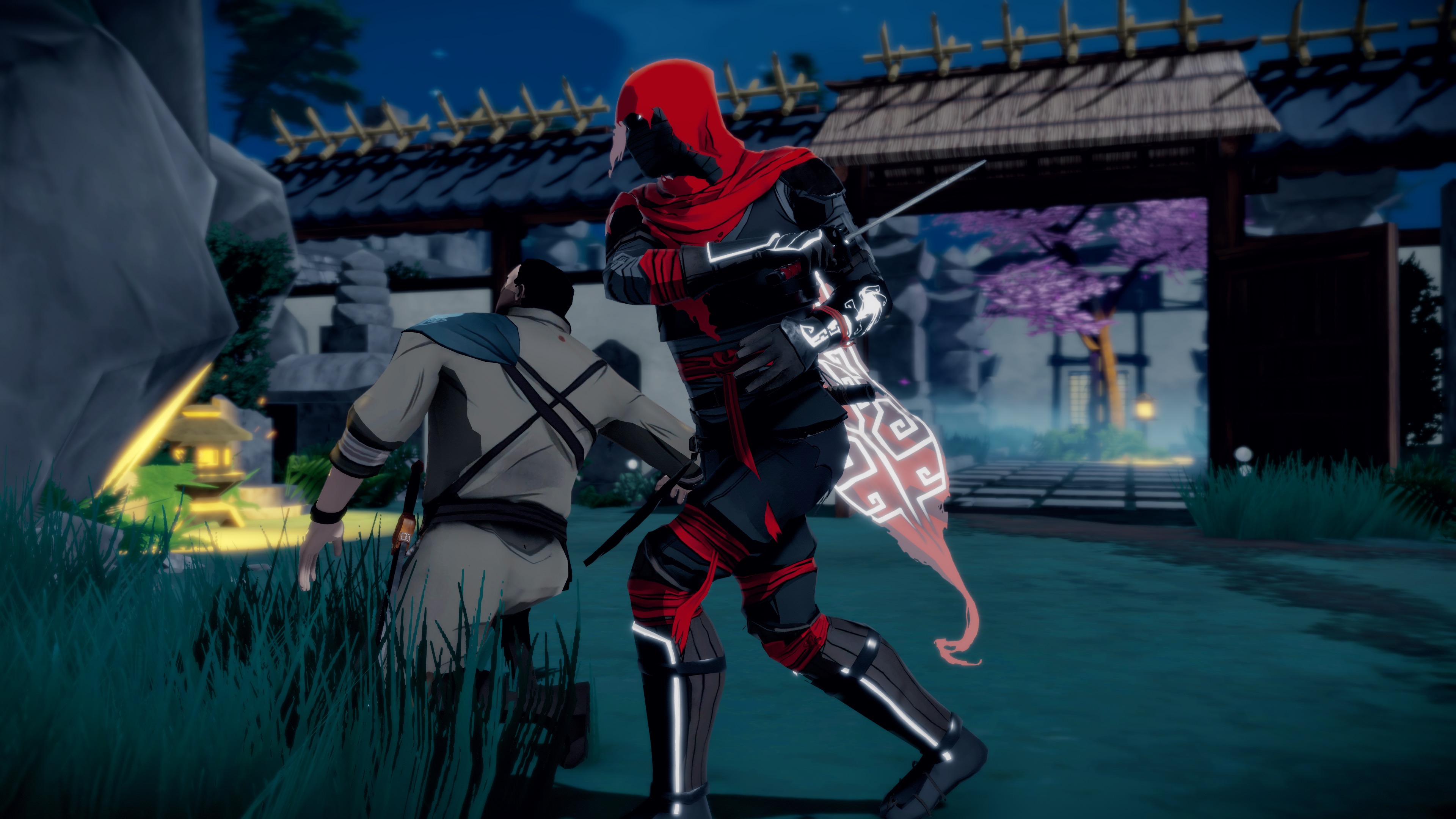 It’s even more pleasing to find the team going beyond conventions of the genre, borrowing from the likes of Dead Space when it comes to the UI and how statistical information is displayed. Like the notable survival-horror series, nearly every stat in-game — from the level of shadow you can cast, to your present state of stealth, to your unlockable upgrades which only further the deadly potential your powers can bring — presents itself through your character’s cloak. Via a similarly oriental decoration of hand-drawn icons, it only furthers Aragami’s elegance without compromising on crucial detail. Of course not all unlockables are purely offensive-based, one upgrade allows you to dispose of dead bodies while another creates a duplicate in order to deceive the soldier, but while there are upgradeables that cater to the offensive types, it’ll be interesting to see how many don’t and where the balance between lethal/non-lethal play-styles stacks up.

Aragami may not be the first game in the world to draw interested parties in with its art-style and while it’s still uncertain how far the team intend to push the narrative of an amnesiac recuperating his lost memories that may or may not (but possibly will) pertain to the events unfolding, Aragami is one of the best surprises this year. With a cleverly-challenging style of play and an equally-smart use of interface and presentation, Lince Works are yet another new name you just might be hearing more of come the end of the year.