The team will be captained by Joshua Begehr, a former FIFA world champion and European-winning champion with German eSports team SK Gaming. 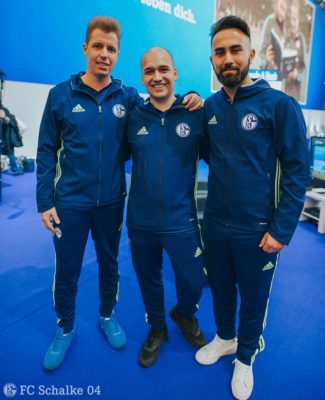 “Being able to realize a project of this scale together with FC Schalke 04 is a dream come true for us,” Begehr said. “The passion for sports and football is what unites us.

“We aim to create a strong community that turns over a new leaf for FIFA eSports and brings it to the next level. FC Schalke 04 is the perfect partner to achieve that.”

Joining Begehr will be Mario Viska, a six-time German and Austrian championship winner, and Cihan Yasarlar, who, despite being the youngest member of the team, has already picked up multiple accolades as a professional FIFA player.

“One month ago, we set sails for a long-term commitment,” says Tim Reichert, head of eSports at Schalke. “Today, we go one step further with FIFA. FIFA offers us a lot of opportunities to get in touch with the German eSport scene, which is why we hope for a broad support by the fans.

“We will proactively work on that by hosting regular community events such as boot camps or meet & greets with our players. Our long-term goal is to set new standards for the public perception of eSports.”

It was only last month that Schalke first announced their big step into the world of eSports, as the Bundesliga club acquired League of Legends team Elements.