As much as I relish investing further hours of coverage-come-playtime into many an independent release — especially if it’s a title that tries something new on either visual or gameplay platform — that doesn’t mean every iteration and offering turns out to be an enjoyable venture. Even if it is regarded as quite the popular and acclaimed release. Thus, here comes the stinker to many of you: I’ve never been that big a fan of Hotline Miami, though I can fully appreciate as much understand why it ranks so highly for many others.

To segue, just looking at the withdrawn, top-down view to one of tinyBuild’s latest unveilings, Mr Shifty, you might think this latest teaser would be doomed (least for me) from the very start. Especially when you look beyond the vague imagery — as bold and purposefully striking its comic book-like art-style might paint —and read a bit more about how the premise and the gameplay intertwine. Because to most, Hotline Miami I guarantee will be the first recent success story many will flick their minds towards in search of reference. But in my eyes, Mr Shifty does what Hotline could not. And that is…obviously…delights me. 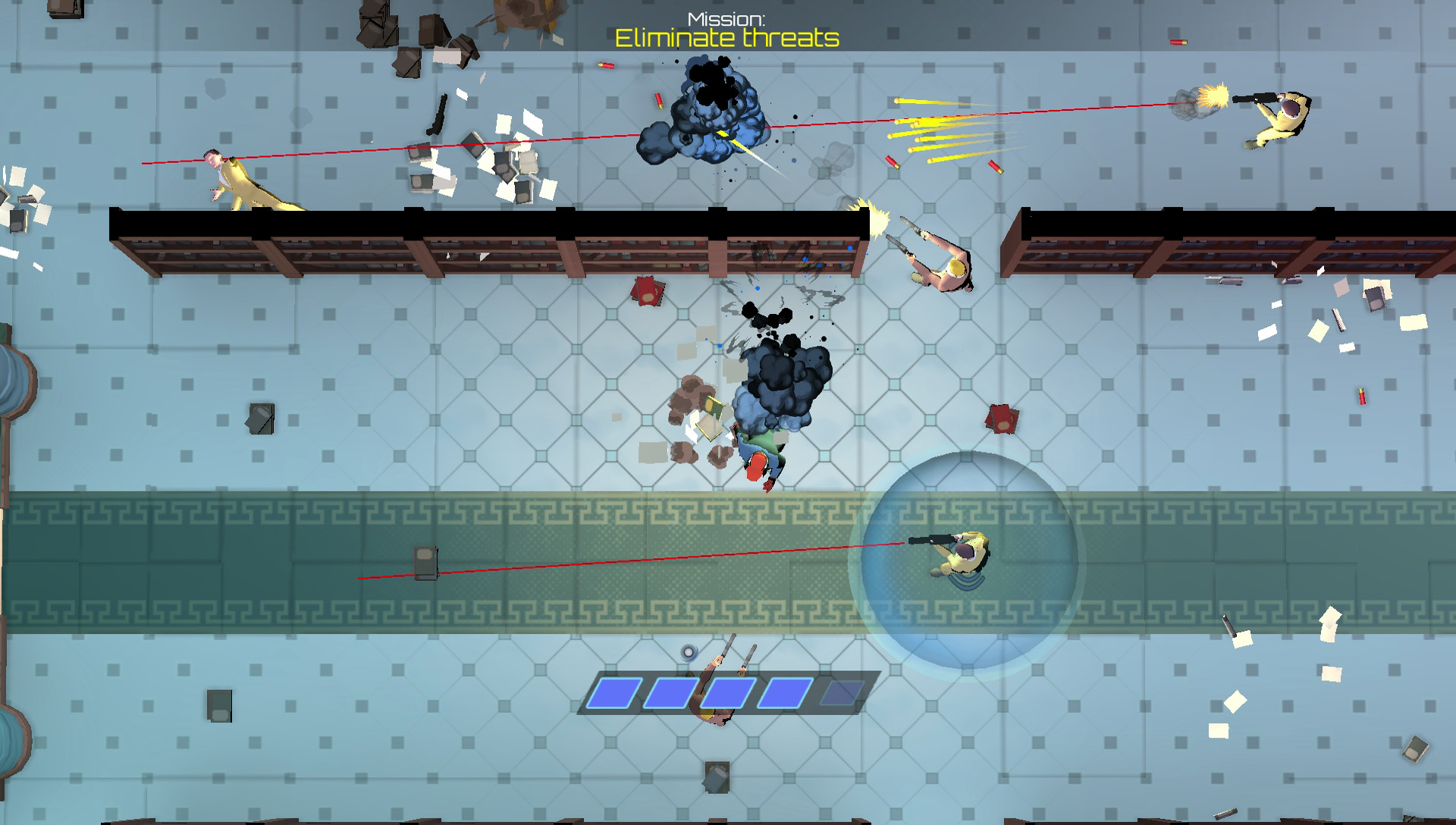 Mr Shifty, as its name might suggest, is all about the twitchiest and button-mashing of manoeuvres. Playing as the title character, you are a young superhero out to do his duty against the most typical of thuggish bad-guys and rough-tumble foes. But while you are a hero granted the power of speed — being able to phase between positions, teleporting from one point to another in tenth-of-second timing — your superhuman buffs don’t alter your mortality. Meaning one bullet means instant death and given the  equally-quick reflexes of your enemies, your speed feels almost cancelled out by the instantaneous reaction.

Luckily, this is not a twin-stick shooter that requires pin-point precision; playing out in that precarious cover-shoot-cover-shoot method. Mr Shifty is stylised as an upbeat brawler where fists do most of the talking amidst all the hellfire of bullets and slugs aimed your way. As such, enemies often require a three-chain combo of punches and kicks to be knocked out before you can move on (and quickly so) to the next one. You do get a momentary warning of incoming fire via infrared-like lasers pointing at you, but this isn’t so much a warning as it is a blatant cry to get moving again. Yet it’s so easy to get locked into the melee of Shifty’s simple combat — and making sure that one hostile AI is truly down — that more often than not, you will end up on the floor in a pool of your own [virtual] blood.

I like it though; it’s death that carries through a lesson to be learned. Rather common in video games, you might say, but like Hotline Miami, Mr Shifty very cleverly makes sure to balance enemy intelligence with smooth gameplay to make the difficulty both punishing but easily addictive to keep coming back to. Whether or not it takes you the first or tenth retry to finally catch the drift you perhaps might be doing something wrong, is up to you; each of the game’s levels are separated into segmented regions meaning you can instantly get back into the action without much wait. The areas I played through admittedly did feel rather plain in aesthetic and structure, but to hold back my more critical tongue here, there was little suggestion as to how far into the story we were let alone the very context of the tale being told. 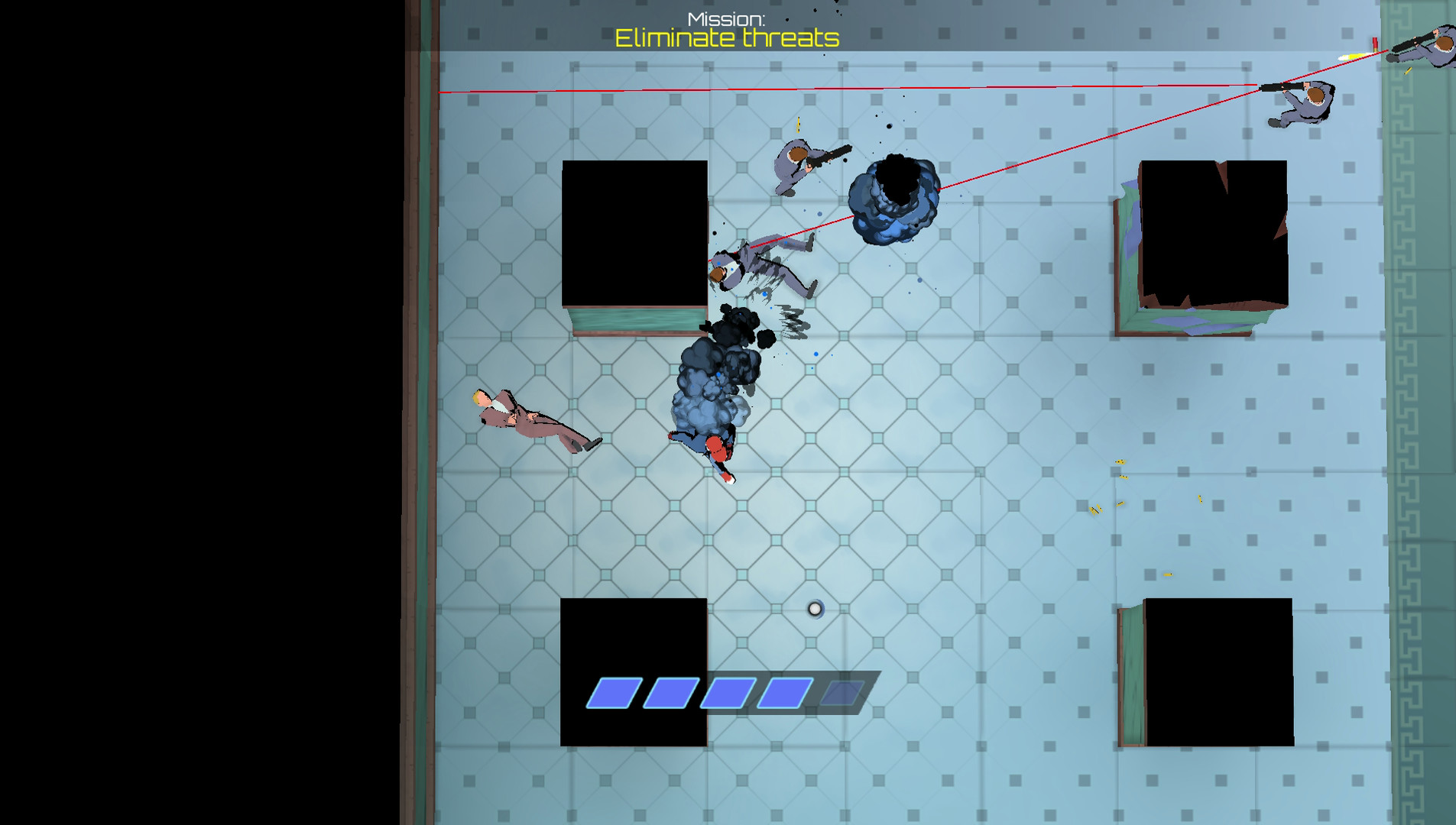 But at the time, I needn’t delve into that detail — you’re fast, you can beat people up and you can die in one hit. Other mechanics such as the limitation in your shifting ability — regenerating only after you remove one’s self from spamming the button too many times — as well as a Bayonetta-style slow-down trick should you [literally] dodge a bullet at the last moment keep the difficulty and challenge ominously connected throughout, while the possibility to use an enemy’s own melee weapons for a temporary increase in attack radius or power offer up a reasonable, if not sizeable, extension for tactics. Enemies too demonstrate reasonable adaptability and horde-like insistency to surround you could suggest said tactics may very well push beyond simply pressing the attack button ad infinitum.

The fact some enemies require you to shift in order to break what looks like surrounding shields certainly suggests one’s offense will lie in more than just your fists. Faint stealth presence alongside — when creeping around a sealed off corner of the room — could also open the way for alternate strategies or maybe even alternate modes where the super- prefix is taken out of your predominantly human stature. But all of this is hopeful optimism coming out of a game with a play-style that seems to have finally warmed to me. Twin-stick controls may still be left out in the cold where I sit, but tinyBuild have my full attention with Mr Shifty here. Least until I finish the final level…after the hundredth pain-staking, teeth-grating attempt.