Video games have come a tremendously long way over the years. These days we’ve got access to all types of genres, platforms and means to play them. One of the more unique mechanisms coming into its own is games which use an external interface as part of the gameplay. Stuff like Sony’s ill-fated Wonderbook and the “toys to life” genre are some of the most well known examples. So far, these projects come from huge companies such as Activision or Disney. But now it looks like independent developers are digging into the concept. Octobo is an upcoming interactive toy with its own game app. 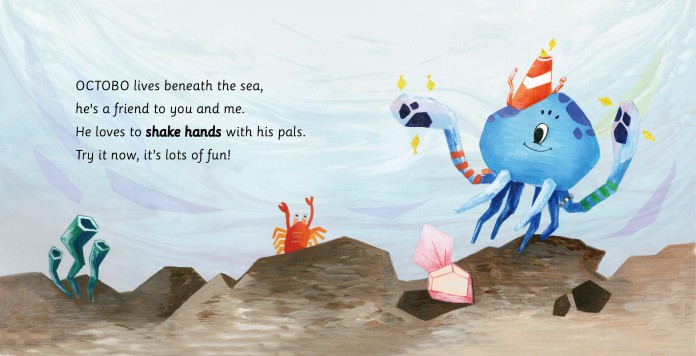 Octobo serves as both the name of the impending platform as well as the name of the toy itself – and boy, it is one adorable toy. Octobo, the character, is a big blue plush octopus with a single, massive eye. Extending from his boxy body are multiple arms all covered in a bumpy blue texture. How does one play with Octobo? Outside of simply using the plush in a typical sense, there is also a sleeve in its face where parents or children can place a tablet. As of right now, the team are targeting both Android and iOS platforms with their app. That means you’ll be good to play around with Octobo whether you’ve got an Android or Apple tablet sitting around at home.

Once the tablet is stashed away in Octobo and the app has been initiated, it’s time to play! Octobo also comes with a physical storybook which interacts with the plush and app. For example, the first page introduces you to Octobo and suggests you shake his hand. By shaking one of his two front-facing arms he will actually respond with visual changes to that big ‘ol eye. The book also comes with little velcro items that can be appended to the plush. When this happens, Octobo again reacts to what is going on and even makes sound effects. All this is accomplished via multiple sensors on the plush itself, as well as the tablet’s built in gyroscopic functions.

Right now there’s only so much one can do with Octobo given the current app version and that only one book is available, but Team Octobo don’t have plans to simply stop here. Their eventual goal is to bring out multiple books in the series and have each unlock new play potential. There’s still a bit of time before you can snuggle up with an Octobo of your own, however. As there is a small team at the helm, they’re currently still working out how manufacturing will work and the costs associated. Once that research is taken care of, then they’ll be able to work toward their goal of getting Octobo out to families everywhere.

It’s a great idea — and one that may in fact become increasingly popular in the future. Children tend to love toys and technology, after all. Merging them together just makes total sense. Once information such as a release window and pricing is announced, we’ll be sure to share the news. Chances are, there might even be an Octobo Kickstarter so keep an eye out for that.