Eclectic, Lavish, Exhilerating, Xenial is the tag-line that accompanies Piranha Bytes’ latest project, ELEX. An open-World RPG may not strike you as something that could be considered ambitious in today’s World, but what if I told you the Nordic Games developer — the same team behind both the Gothic & Risen series — are aiming to fuse two of the most conflicting genres and fields of taste you can often find in role-playing ventures? That Piranha’s ELEX aims to be a hybrid of fantasy and science fiction. Of clattering swords and blistering laser pistols; a World torn between clans and energy struggles. A high tale as much a far-flung verge on the dystopian. Naturally you may want to picture what would happen if Bethesda were to ever conjoin their two notably popular RPG’s in The Elder Scrolls & Fallout (and maybe throw a pinch of The Witcher in there for good reason) into one all-encompassing World and I’d forgive you for making such an easy comparison.

But there’s a reason why ELEX has turned out to be one of the more ambitious games I’ve had the pleasure (more importantly) of hearing and learning more about by the developers themselves — nestled away in Nordic Games’ little corner of E3 as the good people of Piranha walked me through both the background as much the goal behind their game. ELEX takes place on the fictional planet of Magalan in a period long-after a near-cataclysmic meteor strike that has both ravaged the planet yet has also spawned a mysterious substance of which shares its name with the game’s title. This substance, ELEX, proves to be an extremely powerful (but now limited) resource — able to power machines, enable sorcery and even reanimate objects into new forms. Naturally, warring factions with differing moral and social/religious beliefs have emerged — all of which seeking gain dominance over the limited resource and the World by result. 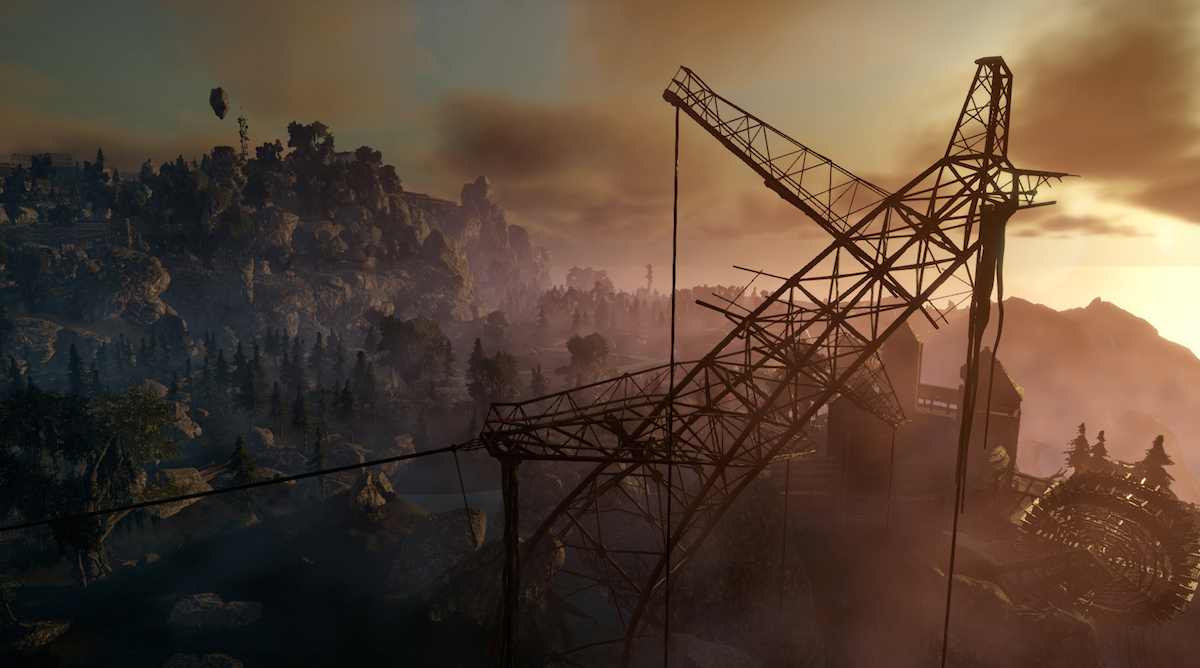 In the game, you play as a member of the Albs, beings whom are able to consume ELEX as a way of ridding themselves of emotion, thus becoming entirely apathetic but far more effective soldiers. Throughout your quest, you can join up with a range of factions, each with their own unique characteristics and background origins — some dedicate themselves to magic, others to technology, another faction even acting as the go-to liberal movement of the game World. But fortunately this is one of only a few stand-out elements that harkens back to the traditional framework of decision-based “go wherever/do whatever” story-telling. Naturally there are dialogue options — of which the developer claims will help flesh out the emotional connection (or disconnection) you set for your once emotionally-deprived avatar — as there are towns to visit, people to meet/greet/kill and even random encounters against a varied assortment of beasts and machines alike.

Yet ELEX, even from the pre-alpha build I was given a hands-off presentation on, already looks and sounds like it wants to push itself beyond the mere safety-net of open-World RPG’s. The fact your player gains access to a jet-pack from the start, furthering the developer’s focus on a detailed and immersive environment both from a grounded perspective as well as from a vertical sense, means — another claim — you can reach any point that is visible in the game World. An aim Piranha hope to achieve within a seamless environment without loading screens that, admittedly, will cater more to fantastical visuals with sci-fi elements sprinkled on top. The question was raised on whether or not the developer would try and balance the aesthetic/art-style to that of a 1:1 ratio between fantasy and sci-fi and Piranha do admit that fantasy will provide the base for Magalan’s World-building.

On top of the traversal mechanics, ELEX aims to implement a fully adaptive system in place so that crucial elements such as the overlapping story/narrative and relationship mechanic — with people, settlements, factions — will adapt and evolve depending on your decisions. For example, if you commit a murder and are spotted, civilians will notify higher authorities and you will then be marked as a criminal. This is of course limited to that specific location (and doesn’t, as the developer noted when further querying this, spread to the entire social network of the game World) and it’s up to you how you further interact with these changing circumstances. Interaction is another key component to the way ELEX‘s naturally-evolving World functions when it comes to confrontations, be it between tribes, people or even differing species. You can of course stand back and play the spectator or you can get involved and help either side. 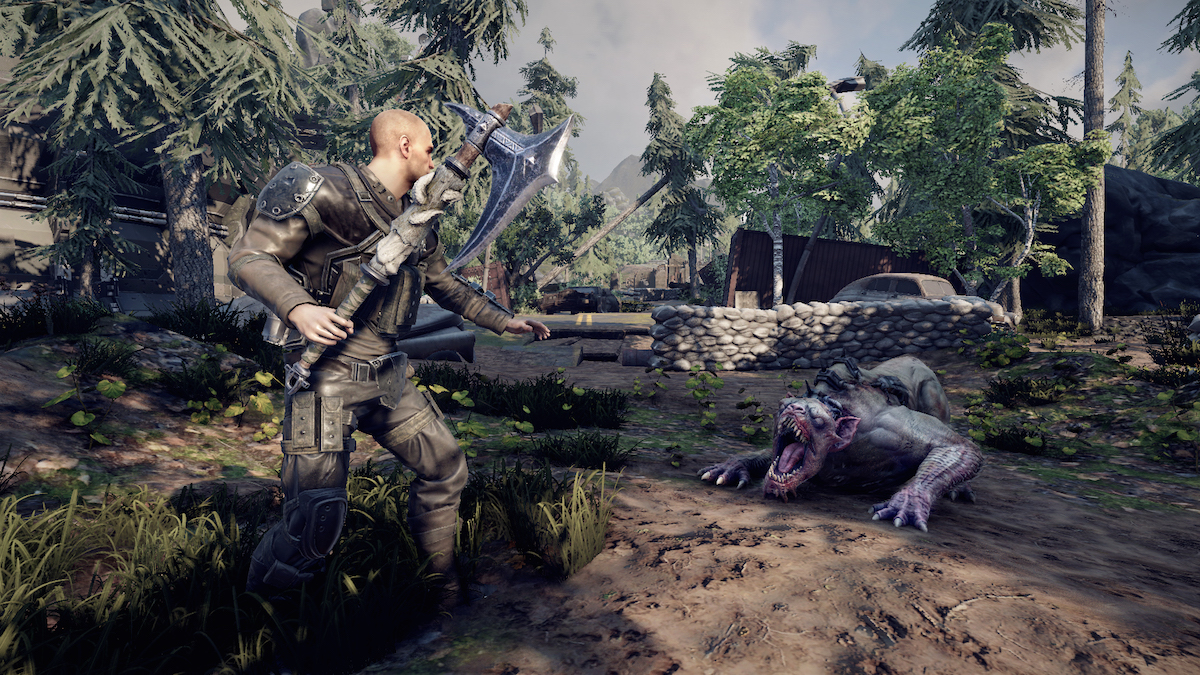 Above all else though, the most surprising aspect to what was demonstrated here — and another component that managed to resonate despite the project’s pre-Alpha state at present — was the combat system and how emergent this gradually felt as curious exploration wildly, yet fluidly, shifted to attack-defense-counter action. Be it against feral beasts, drones or even other humanoids, ELEX‘s combat feels immediately engaging if a little ropey with its weight. This is neither turn-based nor something heavily reliant on statistics or secret numbers and thus feels furthermore like a system based around tactics and strategy as much as it caters to careful button-timing. And combined with all the possibility for upgrades to further branch out the multitude of fantastical and scientific arsenals, this is where CD Projekt Red’s influence seems to slowly weave its way into Piranha’s methodology when it comes to a fleshed out combat system.

Even still, with what was shown, discussed and (more often than not) alluded to in what was a compact little booth, the general consensus is that there is so much more to potentially indulge one’s self with when it comes to the height and scale of ambition Piranha Bytes are clearly setting their sights on for ELEX. It might all be a figurative loft of substance on paper for the time being, but from what was visually shown, there’s already plenty on show to suggest this could potentially be one of the more surprising and thus remarkable iterations to the RPG genre in a long while. With a slick coat of polish and a tune-up to the combat system, Piranha Bytes and Nordic Games may well have found a way to pull off the impossible: to not only blend the rival aesthetics of fantasy and sci-fi, but to also create a game world that genuinely, emphatically and remarkably blooms with content. Time will tell, ultimately, if the ambition can match the end product.