Virtual reality has the capacity to be a nearly infinite amount of things. Yet, most developers find themselves focusing in on already well-established genres and themes. The reason why this isn’t a problem is that it helps to get developers situated in thinking within the virtual reality space. As it turns out, popular genres can actually be seriously improved through the addition of VR too. Survios’ Raw Data is an excellent example of this. Imagine a first-person arcade shooter where aim truly matters because you’re the one literally holding the guns. Or imagine a tower defense game and then consider what it would be like to actually be on the battlefield, running about, setting turrets and defending against a never-ending robot menace. Does it sound a fair bit more exciting than simply controlling the game with a mouse and keyboard or controller? It absolutely is, but it’s hard to realize just how engaging the concept is before putting on a VR headset yourself. 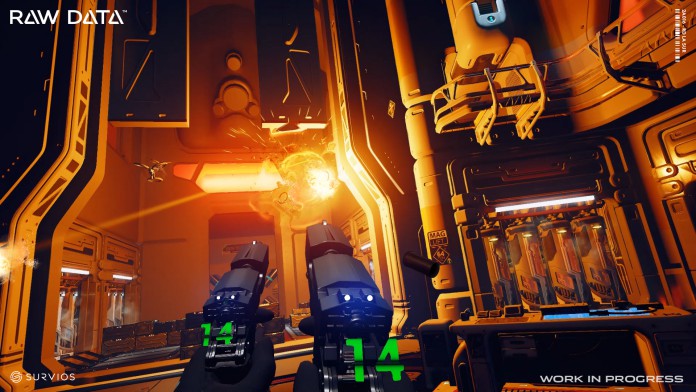 Raw Data is currently designed for the HTC Vive which means players strap themselves in with both the headset and two Vive wands. Once situated in virtual reality, they can then jump right into wave after wave of killer robot action. Players can opt to equip guns of different types, such as pistols or shotguns, or even opt for a bow and arrow or katana. Some weapons, such as the pump-action shotgun, require two hands to use. In order to reload, you must move the controllers as if you’re actually pumping the shotgun. If you’d rather you can instead opt to do things like dual wield pistols for extra firepower. Just remember that even these still require a physical movement to reload. As for the katana, the weapon is strapped to the back of your character. How can you grab it then? The player must reach their hand up to their back in real life to pull it out.

Getting caught up in the controls of a regular video game makes sense because each game has its own control scheme. Here, however, Raw Data’s use of motion in the real world ensures players can never really “forget” how to reload. Of course, they may still have some issues with other nuances of the game, such as how to open their turret menu or warp to another location. These problems are smoothed over rather quickly, at least. And once you get into the game, boy, do you get into it. Some of the upcoming features include two heroes: Gunslinger and Cyberninja. One is focused on guns while the other is a katana user. No matter what, both of them feature their own special ability, such as shooting a super-powered blast to destroy multiple robots with a single shot. 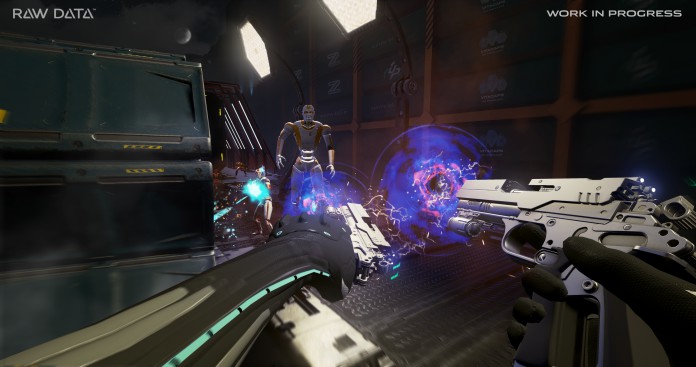 As this is a HTC Vive release, Raw Data utilizes room scale functionality. When shooting or setting up for an impending wave, you’re expected to walk around at least a bit. Leaning, ducking and turning in 360 degrees will all become regular actions while playing. After all, unlike a 2D game, you really need to be cognizant of the threat from all angles and avoid shots heading straight for you. New levels tend to be quite large which means you can’t just walk to all ends. In this instance, players are given multiple options for locomotion. They can point and click to move any spot they choose in the map or they can warp between pre-set destinations on said map. Both work well and don’t cause any sense of confusion after a warp. The only hard part is strategizing where to move next when robots are closing in on your core from both ends of the screen.

This is one game that looks outrageously cool and plays even better than it looks. Never before has a game of this type proved so outrageously exciting. Simply being placed in this VR space makes the action tangible. Pulling out a victory against overwhelming odds just makes you feel awesome. Raw Data makes its way onto Steam on July 14 for the HTC Vive and undoubtedly will become an overwhelmingly popular game for VR headset owners.