In recent months, Paradox Interactive has thrown a big one-two punch combo with the release of the hugely successful Stellaris along with the critically acclaimed Hearts of Iron IV following a few weeks later. The result has been a near domination of the current strategy genre. A huge number of gamers have been either creating xenophobic bird races and enslaving the galaxy or funding a communist party takeover of Australia so as to annex New Zealand for the good of the people. Some (like myself) have been partaking in both worlds.

With a large amount of the last couple of months spent forcing my ideals upon a whole range of lesser beings in my galaxy and enslaving those who complained, then causing a Fascist uprising in Sweden to extend my territories all throughout Scandinavia and Russia, I have been fully on board with both games. I’ll go a step further to assert that they are two of my favorite games this year. With that said, throughout my various play sessions, I’ll find myself wishing the games were more like one of Paradox’s previously released titles, Crusader Kings II. It just feels like the more recent games lack that bit of personality that really ingratiated CKII onto me. Or something. Don’t get me wrong, controlling an entire race is awesome fun. Taking the role of a nation in WWII is also super cool. But insofar, nothing beats taking control of an individual and their resulting bloodline. 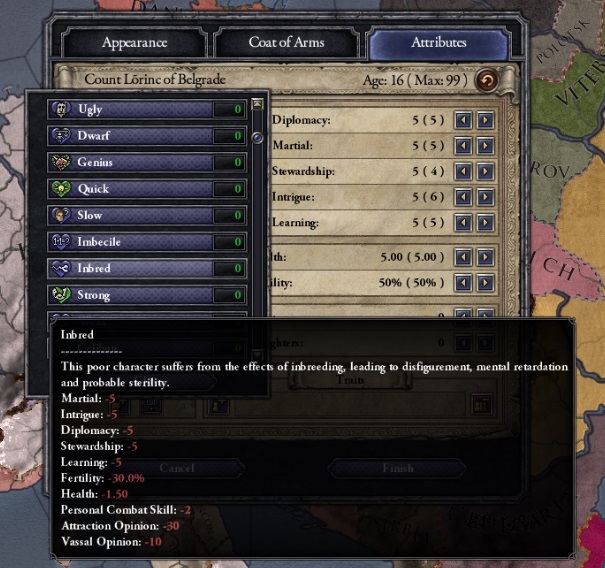 Nothing like an inbred dwarf genius to lead a nation.

Something that I feel indicates the difference between the titles becomes apparent when sharing your experience with the three games. I’ve found myself trying to recount various stories from my CKII playthroughs and becoming lost as I try to connect the various strains of intrigue and maneuvering. Both Stellaris and Hearts of Iron IV have a simpler recountability (totally made-up word) in that most of the interesting things we want to share are on a larger scale and therefore easier to communicate. “An alien leader sent me a diplomatic insult and so I enslaved his race” or “I annexed New Zealand while the allies were distracted with the Soviet invasion of Southern Europe”.

These things are super cool, however, they just don’t have any individual personality. Conversely, Crusader Kings II is based on individual success. Or at least familial success. It seems more relatable and more story driven. It’s the difference between watching an International Football summary show and Game of Thrones. Yeah, for sure, hearing about how Iceland recently knocked out England is awesome and interesting but who doesn’t love intrigue and tits and violence and betrayal and dicks and death? In fact, the details of how my bastard ‘noble’ of a small county in northern Ireland managed to become the heir of Mercia would probably make for a pretty rad premise in a TV show (rated MA for Mature Audiences).

Admittedly, a large part of Crusader Kings II’s overall strength comes from the multitudinous plethora of DLC and expansions that have been added in the four years since its release (the latest expansion was released in February this year) so it does feel a little unfair to compare the titles. Game mechanics and variety of play have received a big boost from these addons. As such, it will be interesting to see where Stellaris and Hearts of Iron IV end up if/when they receive similar treatment. I have really enjoyed my time with the two more recent releases but now I think I might just reinstall Crusader Kings II and backstab some half-siblings or something.