Virtual reality is here whether games are ready for it or not. But it’s not just the headsets from HTC, Valve, Samsung and the like which are now making the rounds. There are also an increasing amount of secondary devices developed to enhance the experience people have with these new (expensive) toys. One of the peripherals quickly gaining steam is VirZOOM, colloquially known as a VR “bike.” No, don’t worry, you’re not actually going to be racing anywhere with your vision completely obscured by a HTC Vive or Oculus Rift. The device itself is actually a stationary bike — similar to what people use now for exercise in their homes or at gyms. That description alone ignores what makes VirZOOM unique, though. 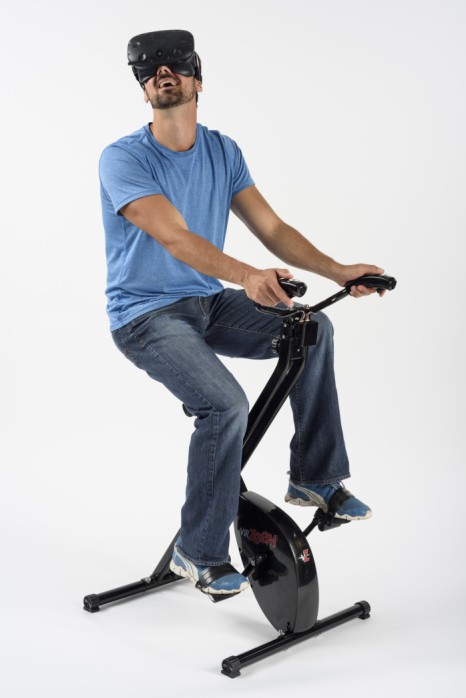 The VirZOOM Folding X-Bike Controller is so named because it includes a controller and pedals which directly influence games. In the past, some exercise bikes have been made with a single game hooked up or as a mechanism to power devices. Here the bike is an integral part of the games and even works for titles which were not designed with it in mind. Right now, the VirZOOM system comes with a minigame collection known as the VirZOOM Arcade which includes five distinct games. Each was created to utilize the bike in similar but unique ways to keep each experience fresh.

Each game is titled with about as much inspiration as most Atari 2600 games: Chopper, Cowboy, Pegasus, Racecar, Tank. As you probably expect, these one-word titles are descriptors for what you actually play as in each experience. No matter which game you play, there will be tons of pedaling required. For some, like Racecar, this just makes you go faster as you speed up. Pedaling is absolutely required in Chopper as if you stop for too long then your helicopter will fall and crash. Of everything, Tank and Chopper felt most like “real” games as they utilized the handlebar controllers to shoot and required some degree of aiming (done via the headset). Still, Racecar proves that racing games could be very interesting — and exhausting — with an exercise bike added into the equation.

Most exciting is the fact that players will not be restricted to VirZOOM Arcade forever. Sure, it’s fun, but the allure on that five-game collection is poised to wear off after a while. PC controller emulation is also included with the package. This allows most PC games to have their controls mapped to the VirZOOM. As such, players could conceivably set up The Elder Scrolls V: Skyrim with it and begin pedaling away. Doing so does require per-game configuration files, but it’s likely a community will spring up to share their config files with other fans.

The big question is how much the VirZOOM gaming system will actually cost people. Amazingly enough, it’s cheaper than most of the headsets available today. The MSRP is set at $399.95 and it is compatible with Oculus Rift, HTC Vive and soon the PS VR.  It’s honestly surprising how playing a game removes one’s focus from the exercise they’re currently engaging in. Those gamers looking to get a little extra exercise in while playing may want to check out VirZOOM for themselves.