It’s not all about the adventures of an anthropomorphic chameleon and bat in the realm of resurgent nostalgia-leaning 3D platformers, y’know. Yooka-Laylee may be snatching all the buzz away from potential competitors, but Grip Digital don’t seem to be phased by Playtonic’s [understandably] high priority in many an enthusiast’s eyes. Why should they though? Standing out as they do as but another team hoping to give the late 90s sub-genre a post-noughties jolt once more in the spotlight, their own vibrantly colorful, vibrantly charismatic release, Skylar & Plux: Adventure on Clover Island, is well worth the appreciation as much the discussion. From the brief gameplay footage alone, Skylar & Plux clearly hearkens to the days when visual palette were treated with the same care and respect as the technical foundation dictating core gameplay.

And it would appear the folks at Right Nice Games are tending to approach this with the more PlayStation facilitated tableau on platformer philosophy with its weapon/action-based gameplay, branching paths and notably cheeky foray of in-game dialogue. From Spyro all the way to Jax & Daxter, Skylar & Plux may be borrowing from the safest of plot-points — an evil mastermind attempting to take control of the World around you; your mission is you ultimately thwarting said villainous plans — but the great thing is that Right Nice treat this with a fond level of self-awareness and testament. The fact Plux, the wise-cracking feathered Daxter/Kazooie to main character Skylar’s Jak/Banjo, is described in press releases as “the eloquent sidekick that every good action platformer needs to have” should suffice in proving the team’s focus is as much referential as it is artistic. 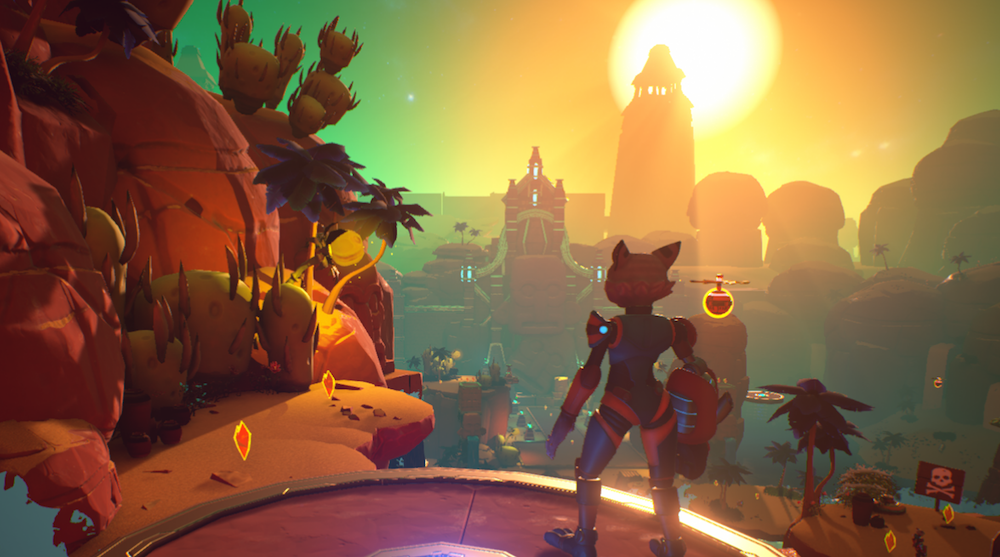 How far these referential nods will go and/or prove dominant in a field of otherwise crucial game mechanics, remains to be seen. At its best though, Adventure on Clover Island (to bring light to the naming; this is another name-colon-name situation) genuinely feels like a return to 90’s adventure games without shoving in your face the kind of faux-cool bravado as a means to simply appeal for the sake of it, rather than genuinely succeed on its own merit. What’s more, a highlight for many who feel disconnected from the repertoire of current industry standards as of late with player respect (or lack of), is the fact Right Nice can come away from this brief preview knowing those who tried it out — or at the very least, one person — recognises the genuine challenge and thoughtful level design in its platforming.

Be it the puzzle-solving or the very platforming action itself, both of which revolve around time mechanics and the ability to manipulate them on a whim, Skylar & Plux is worth attention. While the combat might not have proven itself the highlight here — the relatively simple action of tapping a few buttons speaking for itself — it’s good to see the foundation on difficulty already setting itself up, ultimately leaving it to the player to experiment and figure out the solution on their own. Here’s hoping then Right Nice can expand and broaden out from said foundation to help make Skylar & Plux stand out as one of the best new titles to reengage with that fondest of lost-love genres that is the 3D platformer. And when you can garner such momentary accolades as a smooth performance from both a graphical and frame-rate stand-point too, let’s just say Skylar & Plux — both structurally and technically — will be giving Yooka-Laylee a run for its money in the early period of next year.