I’m sure we’ve all lost count of the amount of multiplayer-based party-like titles that have come out in the last couple of years alone. Be it online or local, the genre has seen a tremendous surge in popularity as of late. Team OK may well have caught sight of the opportunity here but in no way are they hoping to simply put out another figurative brick in the wall of multiplayer-only titles. To create something that’s not just exhilarating or even friendship-crushing, it’s key that the core gameplay is what quenches the thirst. So it’s quite striking, in the context of a visual palette, when delving into the realm of local free-for-all combat to find Chambara — a first-person stealth game of sorts — comprised of only two colors: black and white.

You can of course customize the two colors to end up something completely eye-bleeding or otherwise psychadelic, but the objective will remain the same. Taking the role of one of up to four assassins, your goal is to land a killing blow using the weapons at your disposal in a five-life arena-based match. A simple concept you might think, but Chambara is another worthy example of multiplayer that is as much about the build-up as it is the end delivery as the catch here is that either assassin are too masked in similar colors — the objective is as much about survival, to use your natural camouflage to blend into environments, as it is landing a killing blow. As such, matches are rarely often tense, anxiety-ridden affairs where you’re seldom sure whether to take it tentatively slow or simply rush in for the kill. Patience is an absolute virtue, but there’s always that nagging dread in the back of your mind that your opponent is steadily lurking close by — teasing you so as to maximize their own pleasurable enjoyment. 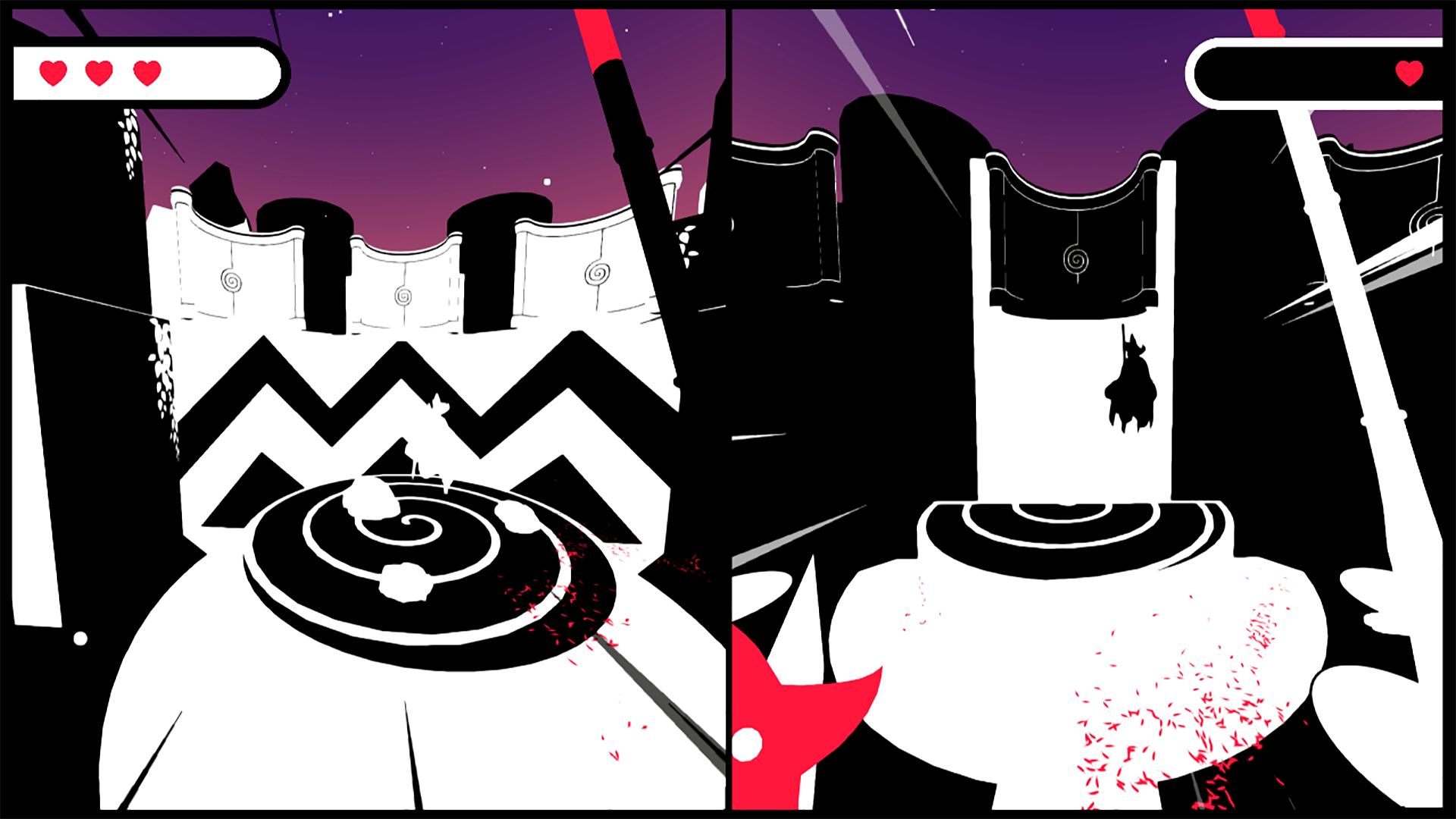 But don’t try and cheat by looking at your opponent’s half of the screen; there’s a feature that allows you to completely blot out your half to avoid players screen-watching. A relatively compact game then and one that stakes almost everything on this one stand-alone idea. From what was briefly played, there was no mention of a single-player component nor any online variant — be it with or without all the in-depth progression you’d usually expect. But at the very least, Team OK recognize it’s as much about what you get out of something as it is what you put in. As previously mentioned, playing defensively and refusing such hesitant moves to win the round are often the best way to approach this. Theoretically you could get away with happily hopping between platforms out of reliance your opponent can’t see you doing so within such a 3D space, but there’s no getting away from the aforementioned thought process that your opponent is merely toying with you — setting yourself, as much themselves, up for yet another stylish kill.

In terms of the weapons at your disposal, you go into every match with two slots to fill: your primary weapon, which acts — no matter the goofy or unconventional appearance outside of typical blades — as a short-ranged melee weapon, and a long-range non-lethal which can stun your opponent. The only drawback, which helps spice up and potentially add even more anxiety to your state of mind, is the fact your secondary, a shuriken for example, can get lodged in walls. Meaning the only way to recover it is to scamper across, potentially sacrificing visibility. You’re not completely vulnerable, but the addition of a secondary item can help make for some increasingly tactical and patient play-styles. Whether or not you’re one who can sustain a certain level of patience, Chambara will likely be a title that is as much slow-burning as it is hectically quick when it drops July 26 for PS4 & Xbox One.