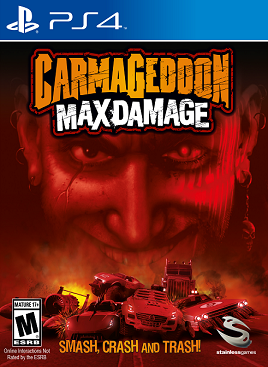 Carmageddon: Max Damage tells the emotional and compelling story of Maximilian von Damagingsworth and his sister, Rita. Upon returning home from receiving Costa Rican elective neural surgery, Maximilian finds his favorite cuff-links missing. He and his sister believe that somebody swallowed them. The only way to discover the culprit is to run everyone down and check the pulped remains. Unfortunately, the mysterious and shadowy Cufflinkinatti have other plans, seeing as how these missing accouterments are vital for the breeding of the perfect attack starling. The nefarious organization sends opposing vehicles to stop them, forcing the siblings to fight for their lives, the hope of a bright new future and I made all of this up.

The real story of Carmageddon: Max Damage is that there is no story. It’s the player, the road, the other racers and the squishy, squishy pedestrians. Frankly, that’s all that is needed. This is escapism in the purest sense; an avenue to channel aggression and stress by excising the demons inside, coming out the other end pure and clean. So, it’s like The Purge, but less stupid. This is helped by the extremely forgiving repair system. Damage can be repaired simply by holding down the button, expending credits. The player’s mangled vehicle pieces itself back together, with items shed through violence flying across the map to find their way home. There was one time I lost a sideskirt, leaving it on the track. A couple of checkpoints later, I decided to repair. The returning piece sliced a couple of pedestrians in half on its journey back, earning me a trophy. So, the system is cool. Running out of credits isn’t a problem, either, as negative spending is allowed. The only downside of ending an event in the negative is a lower leaderboard score.

This forgiving system is there for a reason: to allow the player to engage in as much mayhem (not the Norwegian band, they should not be engaged) as possible. Every environment is littered with ramps, short cuts, loop-the-loops and other stupid nonsense to attempt, nothing preventing the player from making use of them. The idea is to allow the player to create as many violent, memorable moments as possible while making potential failure painless. When a stunt went awry, I was never swearing. Instead, I kept thinking “man, that would have been awesome if it worked” as I either prepared to try again or got distracted by another shiny object. 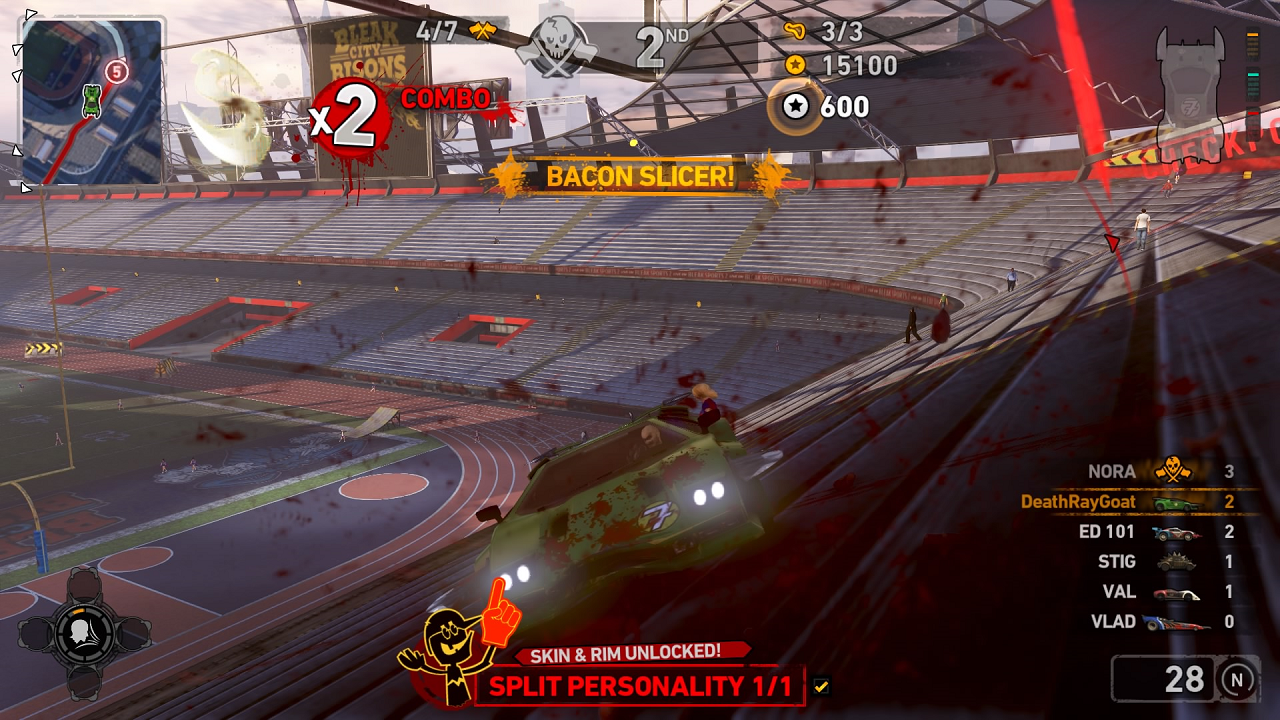 The proceedings take place across various event types. Classic Carma is the mode that the original ’90s game was built around. The player can win one of three ways: completing all of the laps, killing every last pedestrian or destroying every opponent racer. Now, I have been a fan since the demo for the original version shipped on a PC Gamer demo disc. I played that thing for hours, just to see how mangled I could leave the opponents. Needless to say, I have put my time in with this series over its various iterations. Even with that, the basic gameplay found here hasn’t gotten old. Just…don’t go for the pedestrian win. Hunting down the last few can get tedious. The only thing that can cause the player to lose here is the timer. Splatting pedestrians and damaging opponents adds to the clock.

There are a few other modes packed in. The expected demolition derby is present, as well as a straight race. The twist with the race is that opponents’ laps can be stolen by wrecking them. That same philosophy transfers to the checkpoint stampede and pedestrian chase modes. Here, a checkpoint or target pedestrian randomly appears on the map. First person to hit the mark scores the point. These two modes are appropriately chaotic but invite a glimmer of strategy amongst the scrum, as sometimes it’s better to hold back from the chase and go for kills instead of earning points the respectable way. There are even more race types beyond these… 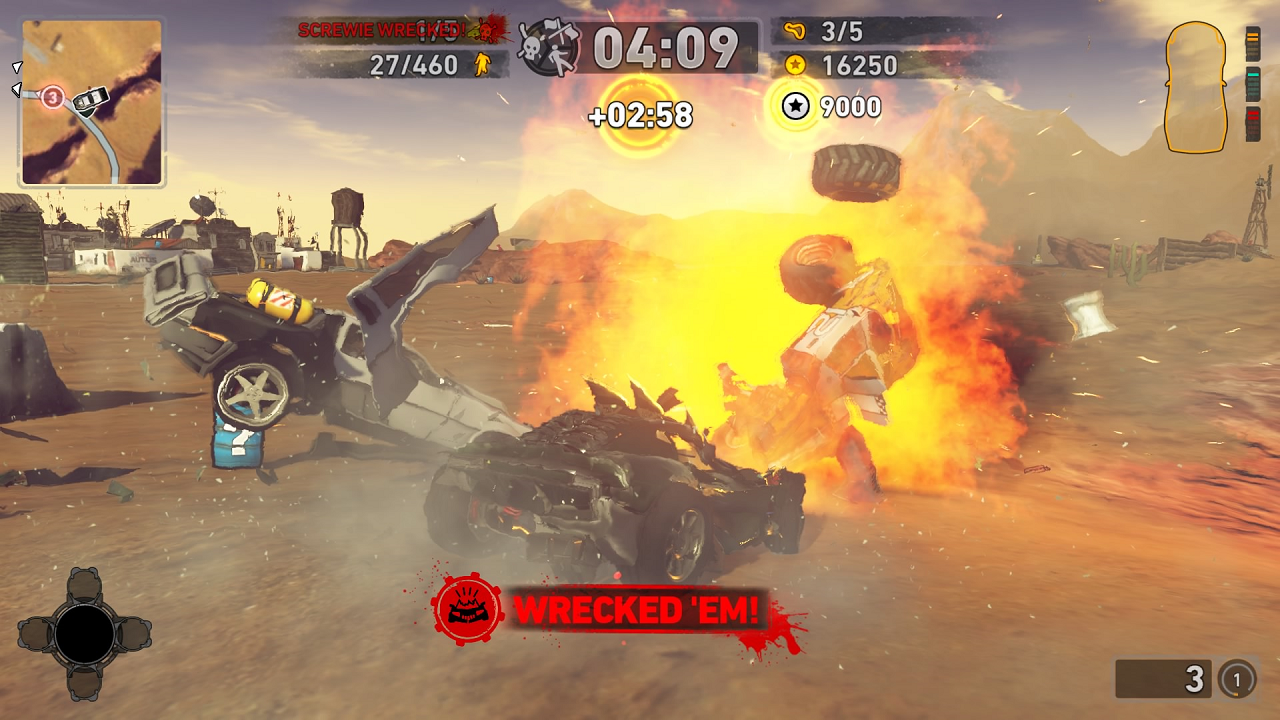 Mixing this all up are the over ninety power ups available to be found. Known as “pups” in the parlance of the game, these are snagged via barrels in the environment. Not every power up is good. For every pup that allows the player to lay mines, there is one that can turn their vehicle to glass…or a pinball. Again, the emphasis on keeping everything silly and over the top is obvious.

Also adding to the variety are the thirty plus vehicles to unlock and use. Each event, a vehicle is designated “stealworthy.” Wrecking this opponent vehicle during the event opens it up for use. Each vehicle can upgraded by spending tokens found in the world, so even the goal oriented player will find themselves with a target. 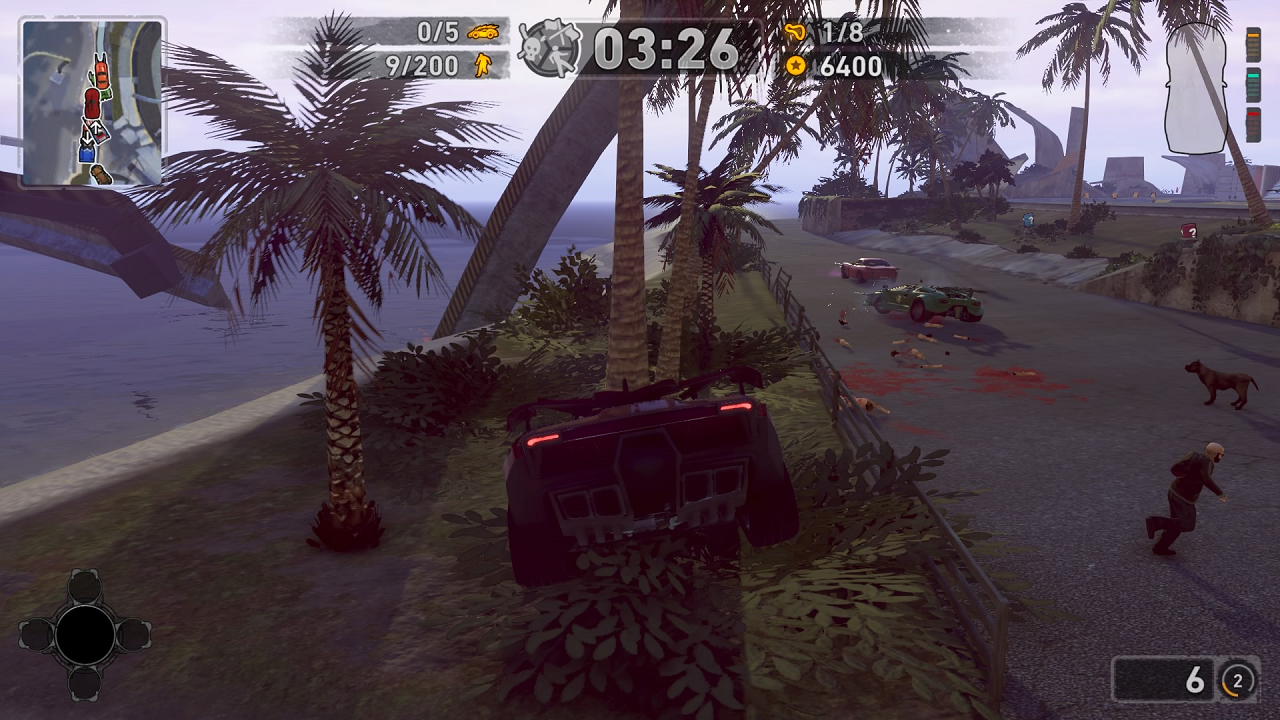 As thrilled as I am to be re-engaged with vehicular manslaughter on a massive scale, there are a couple of rough spots. The most prominent are the load times. Simply put, loading in an event can take extended periods of time, to the point where it is reasonable to question if the entire thing crashed or is just taking time. (Note: It did not crash once, but paranoia can prevail.) One does have to balance this against what the game is loading. While the environments aren’t as graphically detailed as other racers, each map is huge, and open for exploration. Plus, the pedestrian AI, opponent AI, and damage modeling needs to be ready to go. As the framerate and action runs great once it’s loaded, this isn’t the worst thing ever, just annoying when bloodlust sets in. It should also be noted that, only once, I ran into a situation where a blood splatter hung in mid air, as though a decal was misapplied to the building, thus hanging off of it.

The other is the music. Fear Factory is right out. This, in itself, isn’t a complaint. Demanufacture was a great album and all, but it was time for something different. Still, a knock off of the track is there, along with some dub step and metal tracks. The issue is that many of these tracks don’t seem to have the punch required to match the game. Some touches, like boosting the bass of these existing tunes, would have gone a long way to compliment the carnage on screen.

Finally, the multiplayer should be addressed, but it could not be tested during the reviews process. There simply wasn’t an open game to be found. It has been reported that pedestrians are missing as a trade off for smoother online play, but how that turned out is a matter to be explored in the near future. 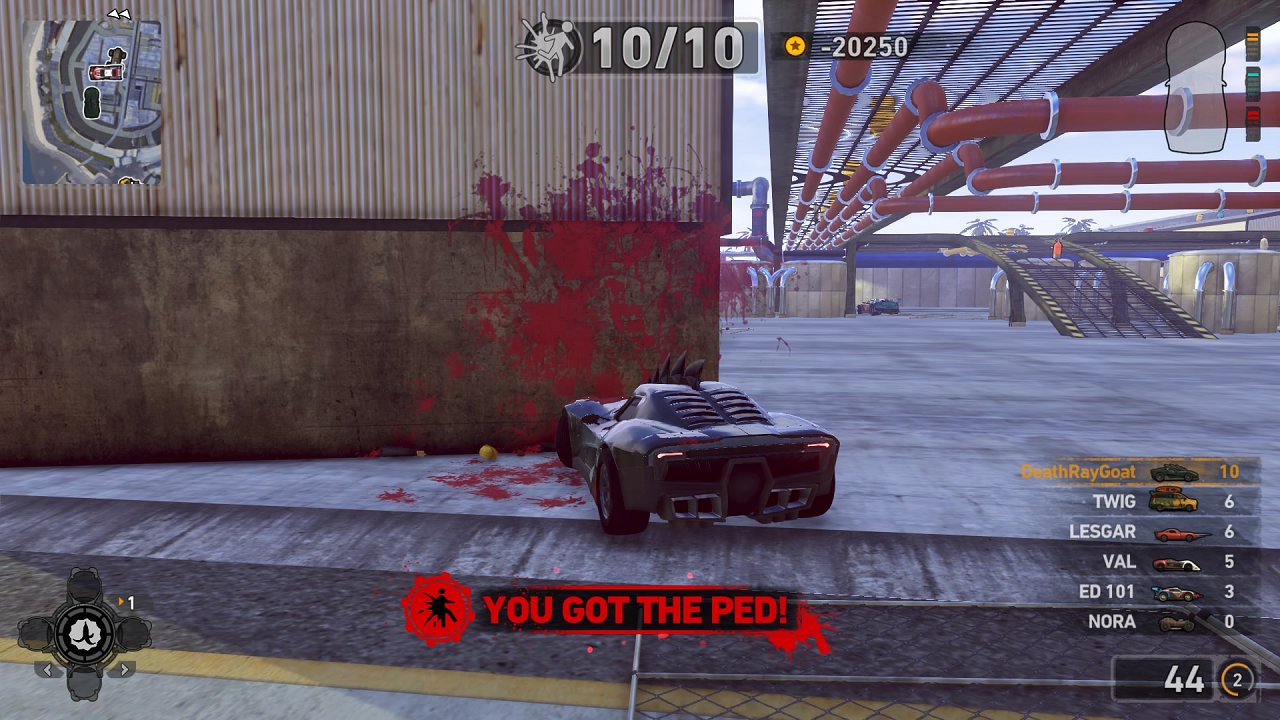 The structure and play of the Carmegeddon titles have always centered around being a beautiful mess; Max Damage is no different. The folks over at Stainless Games obviously “get it” in ways that developers of other goofy racers never did. While this game is a reworking of Reincarnation, this should actually be viewed as the final form of that less than stellar outing. So much so that owners of that title should find this added to their library at no charge. For console gamers or those approaching this fresh, this is an easy recommendation. It’s fun and just the right kind of depraved.