The local multiplayer renaissance is upon us. It seems that every month now we’re seeing multiple new entrants into the living room – some of which are quite good. Sombrero, dubbed as a “spaghetti western mayhem” game, looks that it may become a new multiplayer staple for both folks playing together on their couch or even over the internet. So let’s dig into this upcoming title and see what Sombrero gets right and why people will want to ditch their existing party game lineup to play it instead. 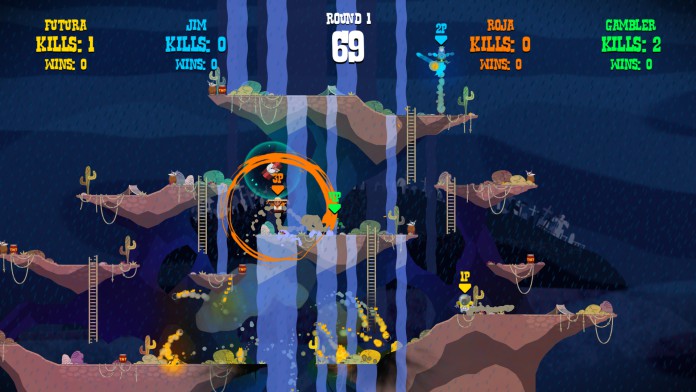 In many ways, Sombrero exists thanks to genre contemporaries like TowerFall Ascension and Duck Game. These are titles which are simple enough to get a grasp on, but feature such a lightning fast pace that “skill” is only a small portion of the equation. The same holds true here. Players (from two to four) assume the role of one of multiple gunslingers and then are dropped into a 2D arena. Right from the get-go, it’s obvious that nothing is meant to be serious about this game. For one, you can play as a sentient wedge of cheese. In any case, once in battle, there’s a quick countdown and then the madness begins. Bullets begin flying across the screen, special attacks are called upon, and everyone is poised to die a lot before a round ends.

There are multiple gameplay modes, but all feel somewhat similar in their implementation. Of course Sombrero’s main lure is Deathmatch mode, where everyone does their best to shoot up everyone else. It’s actually a lot tougher than it seems since characters are so darn fast. Then again, a single shot is all it takes to down them. Another mode by the name of Loot tasks players with trying to grab up monetary rewards in excess of others which varies up strategies a little bit. Power ups also tend to force players to change their plan on the fly as these weapons are completely different from one another. 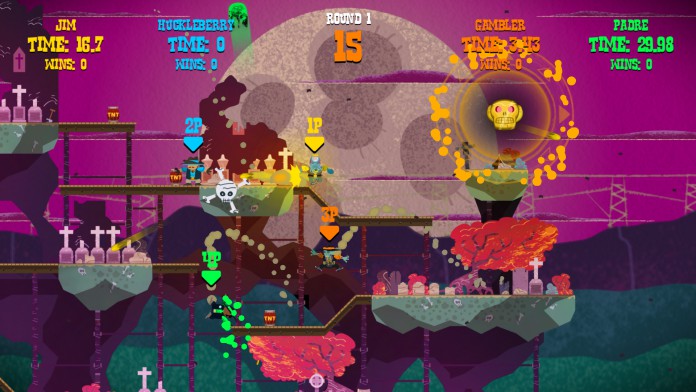 The utter chaos which unfolds within seconds of a match is key to the enjoyment of Sombrero. It’s hectic, but also immediately playable. The controls and concept are both simple, meaning a group of total newbies can start having fun right out of the gate. Because of the fast-paced play, it’s also likely that no one player will ever dominate for long. One thing which this game has which many in the genre don’t is that it is not a local multiplayer exclusive. This is often a factor which discourages more folks to pick up a game simply because online play is not feasible. This game is going to offer its two to four player multiplayer fun for both local and online players.

With bright cartoony graphics and copious bullets flying across the screen at any time, Sombrero is totally hectic. Luckily, none of this makes the screen tough to read. All it does is emphasize the chaotic and enjoyable nature of this upcoming title. Expect to see Sombrero blast its way onto Steam later this year.