Sports games are changing. For the first time in a long while, developers of major sports franchises have begun taking risks and experimenting with new(ish) concepts. While the changes aren’t quite revolutionary and/or groundbreaking yet, they are incredibly significant.

For years the sports genre as a whole has stagnated. In the last decade, only a few real innovations have been worthy of notice. The last significant development was the introduction of the incredibly addictive and extremely successful (and lucrative) Ultimate Team in FIFA 09. Since then, the majority, if not all, of the big franchises have adopted the mode in some form. The strange fusion of collectible card game and competitive online play has had a huge portion of sports fans dumping wheelbarrows of money into the pockets of their favorite sports game developers. The result of all this cash is that more time and energy (and money) was spent on the development of these modes. The last generation of sports games feel almost entirely focused on the various versions of Ultimate Team. Other modes seem to receive only a cursory update with basic feature upgrades and visual overhauls.

With that said, throughout the years, there have been exceptions to this dominating trend. In fact, a few developers have been setting trends of their own by revisiting and experimenting with some older ideas that never really came to fruition. This is good.

Rewind back to the mid 00’s to an age before Ultimate Team. The new and exciting innovation was when FIFA, Madden, etc began to include game modes in which the player could control a single athlete. Suddenly we weren’t restricted to acting out the equivalent of a sporting hive mind as we steered our entire team to the inevitable championship. In these early days of the single athlete mode, innovation was yearly. Games like EA Sports’ NCAA (college) Football 07 were doing awesome things for the fresh new game type. Players took the reigns of their athlete in a ‘Campus Legend’ mode and put him through college. Keeping up his grades, trained hard, took exams and played football. You could even import your college superstar into the equivalent Madden game for that year! It was exciting stuff that had players wondering what the next awesome addition to Be a Pro or Superstar Mode or MyCareer or whatever other single athlete mode you preferred. These were implementations that resonated. These games were, for the first time, allowing us to personalize a single athlete that we could then meld into a legend. This was putting RPG mechanics into sports games. Our athlete gained exp which we could convert into stat increases. Our athlete (or ‘character’ by this point) developed over time. We watched, acted out, and created our own individual stories. Finally we were playing for a reason. We had personal, singular motivation for a particular player to do well. Of course we did, that player was us! It was also an age of quirks like one in Madden 07 that had you picking particular traits your parents possessed, which in turn affected your athlete’s starting stats! Awesome. 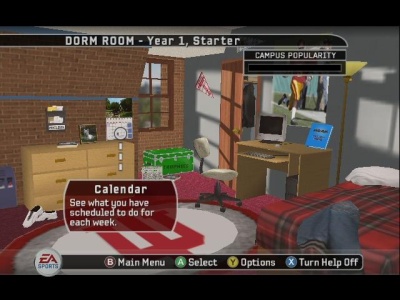 In NCAA Football 07 your player had a dorm room and everything!

Predictably, over the yearly iterations of the various games, some form of these Be a Player modes became a definite inclusion. But as time passed, focus moved on and magic was lost. The modes became bare boned in comparison to others. They failed to maintain the innovative standard we hoped for every year. Eventually, we moved on to different game types as we followed the developers into increasingly deep variations of franchise mode, or we buried ourselves in collectible playermon cards.

In the time since the glory days of NCAA 07 and others, I can only think of one game that really broke the mold when it comes to legitimately big sports franchises. That game is Fight Night Champion. Released by EA in 2011, Fight Night Champion put an emphasis on what it dubbed Champion Mode. The mode was something fresh.  A legitimate story in a sports game. It had dialogue, drama, motivation and strong core gameplay. Looking back, it makes sense that a boxing game would be a pioneer for a game mode which features a single athlete. While flawed in many aspects, Fight Night Champion made a significant step forward in the development of single athlete game modes and was critically acclaimed for doing so. Who would’ve thought that evoking emotion and motivation could make for a compelling game mode?

Unfortunately, EA decided to put the Fight Night series on hold soon after. In the years since Champion and the first iterations of the single athlete game mode, significant developments just haven’t kept up with the rest of the gaming world. Yearly iterations seemed more like visual updates with slight mechanical tweaks (much like the rest of sports gaming) rather than the result of any genuine effort to grow.

Then titles like NBA 2K began to put emphasis in single athlete game modes again. In fact, NBA 2K pretty regularly lead the pack, consistently improving it’s single athlete mode and calling it MyCareer. The development of the now standard game mode culminated in the release of NBA 2K15. An excellent version of creating a player and growing him throughout an (hopefully) illustrious career. Cutscenes, personality, features galore, celebrity cameos, goals, and a hint of story (MOTIVATION, OMG) all worked together to provide what I believe to be the most enjoyable single athlete mode to date. 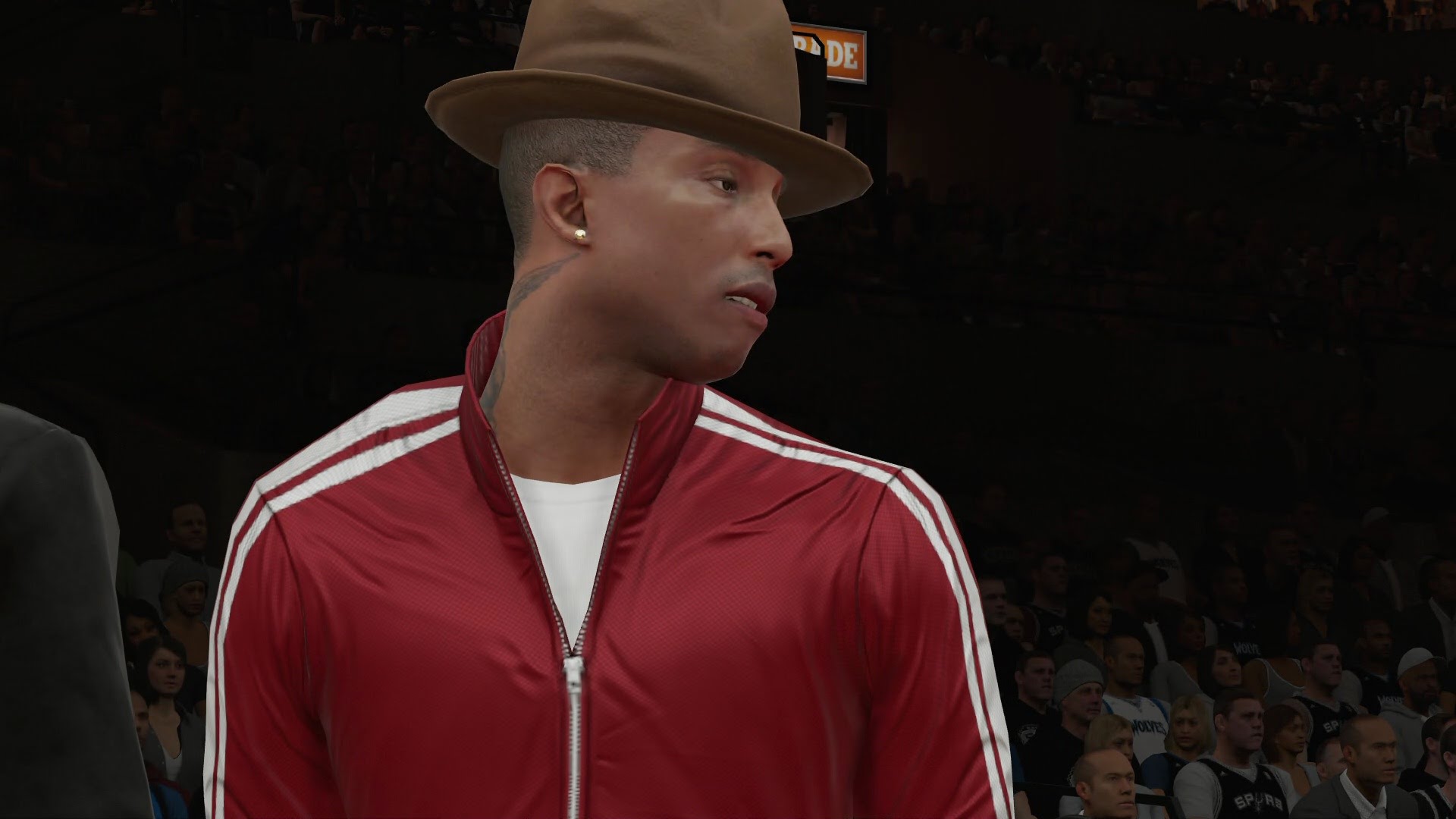 Players in NBA 2K15 had the chance to make friends with Pharrell if they met certain criteria.

Then came NBA 2K16. This was the big one.  2K16’s career mode was to be directed by a Hollywood director. Academy award winner Spike Lee to be precise. They even called it ‘A Spike Lee Joint’ (like his movies omg!) and the mode was to set a new standard in sports games. This was unprecedented. Sure, Hollywood involvement in game development isn’t a particularly new concept with directors such as John Woo (Stranglehold), Steven Spielberg (Medal of Honor) and John Carpenter (Lollipop Chainsaw) among many others all taking some role in video games. But a sports game? It was almost inconceivable before 2K and Spike Lee made their announcement. Unfortunately, as it turned out, the latest Spike Lee Joint isn’t all that great. What it was, however, was a genuine leap forward in ambition and innovation for the mode. Motivation was present, drama was attempted, characters felt real(ish). Once the story concluded, it remained open ended enough that the player could enjoy melding their athlete into whatever they envisaged the character to be. Sure, the story was cliche, the lack of choice frustrating and the writing flat, but the effort was inspiring.  Finally, sports games were changing. Finally, we had developers trying to implement emotion and motivation (the magical motivation) into what had previously been a sterile, businesslike genre. 2K haven’t detailed the MyCareer mode of the upcoming NBA 2K17 so we can’t know for sure if they plan to continue with an emphasis on story. Something that has been detailed, is EA’s answer.

Enter FIFA 17 with its recently announced ‘The Journey’ mode. The mode follows the exploits of a young footballer throughout his career. The trailer shows multiple cutscenes full of dialogue and drama in what can only be interpreted as an attempt to evoke — you guessed it — motivation. This is awesome. Regardless of the quality of the end product, we simply cannot be disappointed in developers attempting (or copying) experimental concepts. Innovation requires error. While it might take a few iterations to achieve anything worthwhile, in the meantime, let’s be happy that a genre that has been stagnating for years is finally making moves to become more than it is.