Scans from the upcoming issue of Japanese magazine CoroCoro have leaked online and they reveal two new Pokémon to be added to Sun & Moon’s Pokédex. The first is Kiteruguma, a normal/fighting monster that appears to be a red panda. It is a highly feared Pokémon and the residents of Alola have warning signs of areas where they can be found. Kiteruguma’s abilities are Fluffy and Klutz. Fluffy is a new ability introduced in this generation with no information on it, but Klutz prevents the Pokémon from using held items. 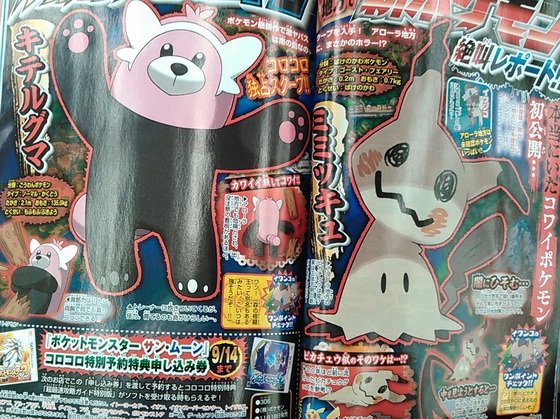 The second Pokémon revealed is Mimitsukiyu, a Ghost/Fairy Pokémon that at first glance looks like a badly drawn Pikachu, but is actually a Pokémon that covers itself in a sheet because it hates sunlight. Trying to remove this cloth from it will result in a loss of your health. Mimitsukiyu comes with strong type strengths and weaknesses being immune to Normal, Fighting, and Dragon moves while having 1/4 resistance to Bug, but only weak to Ghost and Steel, and its STAB moves are super effective against itself (Ghost), Dark, Dragon, and Fighting. Mimitsukiyu also has the new ability Disguise. Like Fluffy, there is no description for the ability, but if the name is anything to go by it will likely have something to do with tricking the opponent of its type or species similar to that of Zoroark.

With CoroCoro being a Japanese magazine Kiteruguma and Mimitsukiyu will likely receive names for western audiences once they are officially revealed.