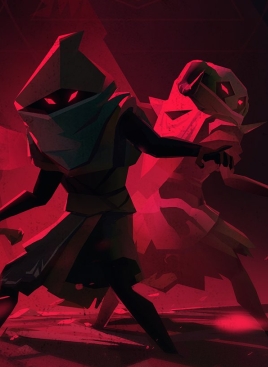 “Dungeon Crawl/It’s the great crawl of all/No crawl’s too small/For a Dungeon Crawl…” Even since the “Vault of Bones” episode of Adventure Time, I keep hearing that song play in my head whenever I play a particularly enjoyable dungeon crawler, game with procedurally generated maps or roguelike. It just seems particularly appropriate and serves as a sign that I’m really enjoying myself in the game. And in the case of Necropolis, I found myself hearing that tune an awful lot. It’s a traditional third-person hack-and-slash game and while it may not appear to bring much that’s new to the table, what it does bring is executed extremely well and results in a fantastic little romp with a fantastic amount of death.

Necropolis casts you as a cloaked adventurer descending into the titular necropolis of the archmage Abaraxis in order to plunder his extremely large collection of magical items and treasure, goaded onward by Abraxis’ servant, the Brazen Head (appearing as a giant sentient yellow pyramid with one eye, as if to bring up even more connections to popular cartoons). Make it through several levels, and you can escape with what may be your wildest dreams; Fail, and you serve as a stain on the floor, decorating each area. Or you could end up being chronicled in the various graffiti found on the walls, which you can check out for a dose of humor, be they rhyming death scenarios or chronicles of Abraxis’ conquests with a quirky twist.

In fact, the Adventure Time connection runs a little deeper than just a brief song that kept running through my head. Despite having a bit of a darker feel, it really does feel like a lot of Necropolis wouldn’t be too out of place in a piece of animation like that. There’s a twisted sense of humor flowing through several bits of it that hits a sweet spot, with every item, scrawl, and Brazen Head narration having just the right amount of wit and snark to it. But what really makes things stand out is the game’s art style, which keeps things simple and has a unique feel that gives every character and bit of scenery a cartoonish feel (along with some slightly surreal and epic backdrops at times) while still maintaining a foreboding tone fit for a game such as this. Bright colors and hints of neon stand out perfectly among all dark corners, adding to the overall terrific look of things. 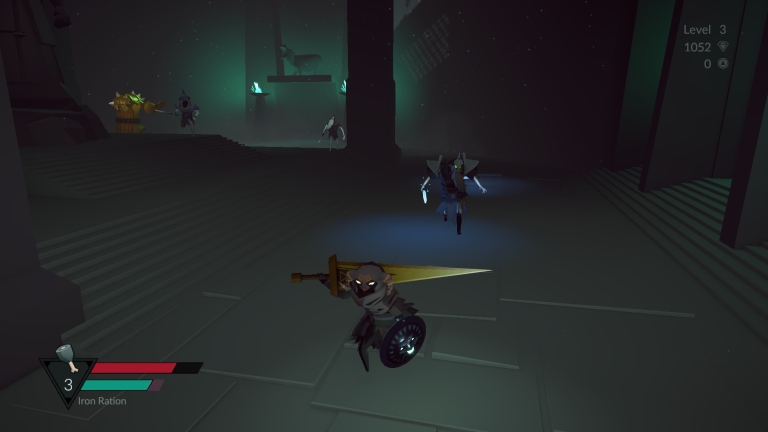 The monster design is also great as well, with even the most basic creatures such as skeletons still coming off as having personality. As you progress, the likes of albino imps, triangle-headed clockwork golems, and beasts that I initially thought were evil Street Sharks begin to show up as well, adding to the diversity of things. And you will indeed have plenty of chances to encounter them, as each level is quite large and features a lot to excitedly explore, from secret passages, nooks, and crannies containing treasure chests and secret merchants to open areas littered with multiple paths and deathtraps, making you glad that you remembered to craft some chalk along the way.

Did we mention deathtraps? Because there will be quite a few, oh yes. You can use them against the various foes rushing at you, and it is highly recommend. Necropolis’ combat is nice and solid, requiring you to expertly duel, dodge, block, and lure others away into an area you can manage in order to succeed, all with controls that work perfectly (although a controller is highly recommended). You get a nice selection of weapons, shields, and armor to loot, purchase, and/or unlock, each having their own various strengths that encourage players to seek out the combo that works best for them.

That said, death is inevitable. And indeed, Necropolis utilizes permadeath, so one slip-up and it’s all the way back to the very beginning, with just the basic starting goods. So how do you bulk up for future descents? Well, it’s all about the money. The more gems you unlock in a playthrough, the more is converted towards earning tokens, which you can also get for achieving various MMORPG-style goals (kill a certain number of specific enemies, grab enough treasure, et cetera) and which also carry over to each new game. You can spend the tokens towards golden treasure chests containing powerful gear at the beginning of each level (or collectible dyes which can change your character’s appearance and land of origin), or you can save them towards unlocking codexes, which are a series of books that provide your rogue with a passive skill that can assist them greatly, though you can only equip one at a time, so choose wisely. 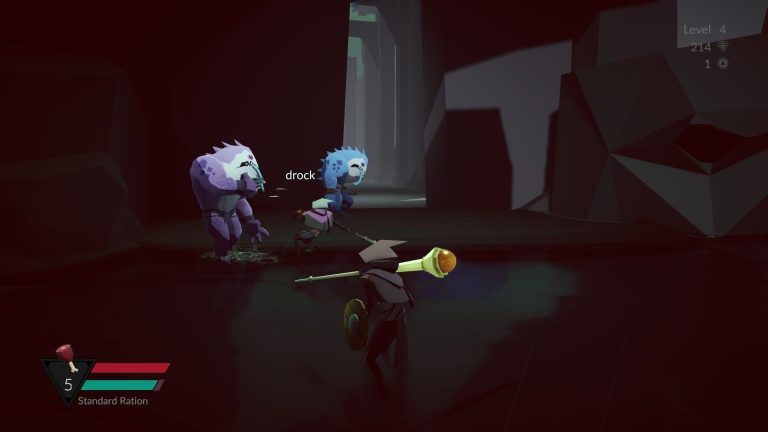 In other words, your success and progress in Necropolis is tied into whether you want to live in the now or save up for later, providing the opportunity to consider your best strategy. Compared to similar games that play upon the risk/reward aspect, though, things are leaning more towards “risk” here. Not only do you need gems in order to purchase items in between levels, and to get a blessing from the gods that boosts your health or stamina (that increases each time), but you need to grab two hundred gems just to unlock the exit in each stage. You also need to scarf down potions and food in order to keep your stamina up for more movement and attacks, so you have to hunt for them or the materials needed to craft these goods (because of course there’s crafting) as well. There will always be a risk, but that’s only because Necropolis keeps encouraging you to study each new enemy, attack pattern, trap, and much more in order to survive, and the difficulty level is always tough yet fair.

Or as fair as it can be for a game with randomly-generated content, anyway. Yes, just like other titles such as Enter the Gungeon, sometimes the hand of fate in Necropolis gets wonky on occasions. Maybe it rolls double sixes and immediately starts you out on a level with a ton of gems and a man-sized game-breaking sword embedded in the wall, maybe it rolls snake eyes and lets you open a door to discover half a dozen viking skeletons who have just mentally pictured your puny wooden shield as a bullseye. And while a dose of old-fashioned Nintendo Hard challenge is always appreciated, you will wish that the speed at which your character drinks or eats was a bit faster, or that enemies spawned a little less frequently. Again, the randomization is a factor here, and it never gets too annoying, but frustration can occur at time. 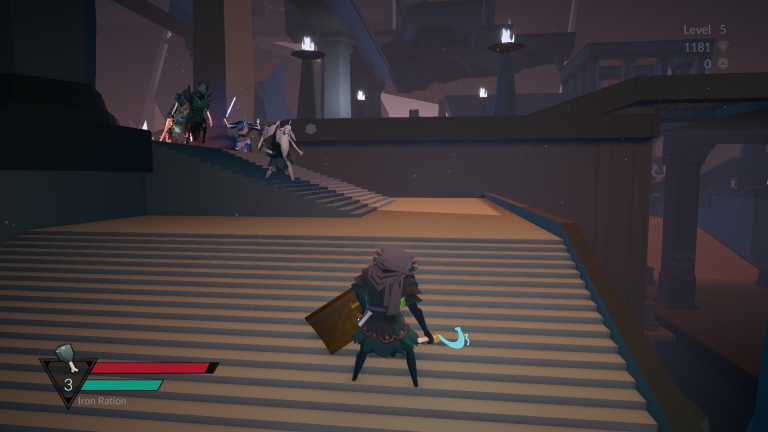 The enemy AI could also stand to be improved a bit, especially in the game’s co-op mode. Yes, a full-on co-op mode in a roguelike game such as this, where friends can instantly drop in and drop out. As cliche as “X meets Y” sounds, it does sort of feel like Dark Souls meets Left 4 Dead. Whenever one of your dungeon buddies dies, you have a limited amount of time to get to them and press a button to revive them, though it leaves you open to attack. Fail to get to them in time, and they respawn, but with every bit of gear they had now gone, requiring the others to help them out and get them the equipment they need in one way or another.

While the core game will remain unchanged in co-op, the huge levels and modest hordes of monsters perfectly suit both single-player and multiplayer. With the latter, though, it really does create a scenario where true co-operation is the key to victory, where you have wisely divvy up the gems you find and the loot from fallen enemies, and not do anything stupid like having one of your fellow staffers STEAL THAT ULTRA-RARE AXE FROM THE GOLDEN CHEST YOU UNLOCKED WITH YOUR TOKEN, WHICH IS A JERK MOVE THAT LEFT ME WITH PIDDLY GEAR, YOU KNOW WHAT YOU DID AND I WILL MAKE YOU PAY!!!…Um, sorry, I still have issues that I’m working through. But no matter, multiplayer is still quite fun, even though enemies will awkwardly lock onto one player and completely ignore others, even if you’re only six inches away from the path to them.

On one final note, Jon Everist’s score for the game is damn incredible, providing several haunting, orchestral yet minimalistic themes that perfectly fit the mood without ever overshadowing things, suitable for swordfights or just casual exploring. It’s no wonder that the soundtrack acted as a pre-order bonus, because it does definitely seem like a terrific incentive with tunes such as this. 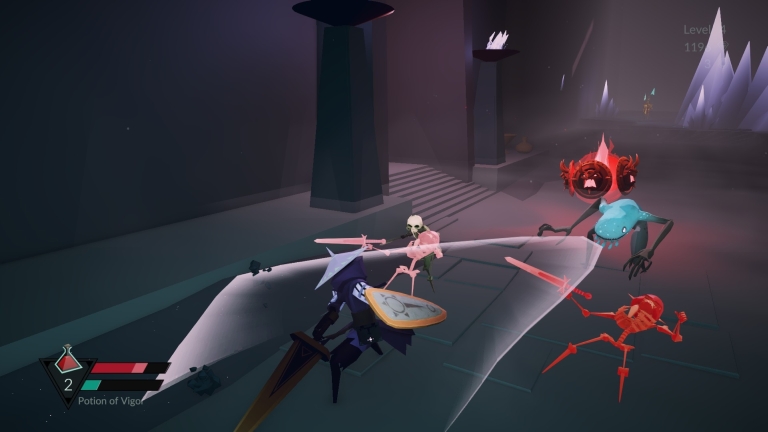 While roguelike and roguelike-inspired games such as these feel like a dime a dozen in recent times, Necropolis stands out simply by being the best that it can be, with a striking visual style, great sense of humor and an enjoyable co-op mode working together with immense, randomized, yet terrifically-designed levels and some great combat. Developers Harebrained Schemes have crafted a stellar entry into the genre, one that’s still tough as nails and yet has you coming back to it again and again. It’s a superb hack-and-slash game that’s fun all around and comes highly recommended. Indeed, Finn and Jake would be proud.