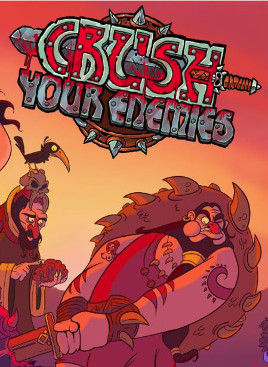 Life is full of many fine things from which we derive pleasure.  The particulars may vary from one culture to another or between different individuals, but love for things such as food, music, art, social activities and so on are common answers to what are some of the finer things in life.  What is best in life, on the other hand, has a universal correct answer: crush your enemies, see them driven before you and hear the lamentation of their women.  If the answer is truncated to simply Crush Your Enemies, we now have a more succinct universal answer and the name of the Vile Monarch’s fast-paced RTS.

Crush Your Enemies takes place in the fantasy world of Generia which is a typical fantasy world filled with noble knights, ladylike elves, and tiny little people that live underground.  Generia is also facing an invasion of drunk and obnoxious barbarians with hairy chests, massive beards, and shaved bollocks that love using naughty language while they conquer everything before them.  The player controls this horde of barbarians in an RTS that is designed to cater to the strategic mind that has a fleeting attention span.  There are no extensive tutorials that take away from time that could be better spent mounting heads on pikes and no battles will span multiple hours.  Fifteen minutes is considered a long battle, and the quick pace of combat is what generates a lot of the enjoyment.  This is essentially an RTS that has pick up and play accessibility with tutorials that are extremely brief and only used when a new element is introduced to the game.

That is not to say that the quickness downplays the strategic component, it just means going with a dumb strategy will result in a quicker death as opposed to watching a slow defeat drag out for over an hour.  Each battlefield is the size of a single screen and the enemies tend to get busy immediately after the stage begins.  Being able to think quickly is a major factor in determining success as bad decisions early on in a stage can be incredibly difficult to recover from.  Rushing straight to the enemy base with no regard for the lives of the barbarians might capture the spirit but will probably bring about a swift defeat.  As the conquest advances more unit types become available, here is a brief and simplified explanation of how the different units work.  Peasants are more or less cannon fodder, in large numbers they can cause some damage but a comparable sized mob of any other battle unit will slaughter them.  Peasants are best utilized when they are sent to a shelter where they can bang like rabbits, I mean, recruit more people and send them to barracks to train into something more formidable.  Generia has the fastest accelerated academic programs out of any school in existence, because by simply entering training barracks anyone will instantly transform into whatever that particular barracks specializes in, for example it could be an archer, shield bearer, or warrior.  Archer units are useful for stopping warriors in their tracks, but if they cannot finish off the attacking horde before they have to reload they don’t hold up too well in melee combat.  Shield bearers are not offensive powerhouses, but sending them against a group of archers is smart since they deflect arrows back to the attacker.  Warriors are the typical melee powerhouse unit that can make minced meat out of most opponents, though they will suffer losses if an archer unit catches them or they get near a ballista tower. 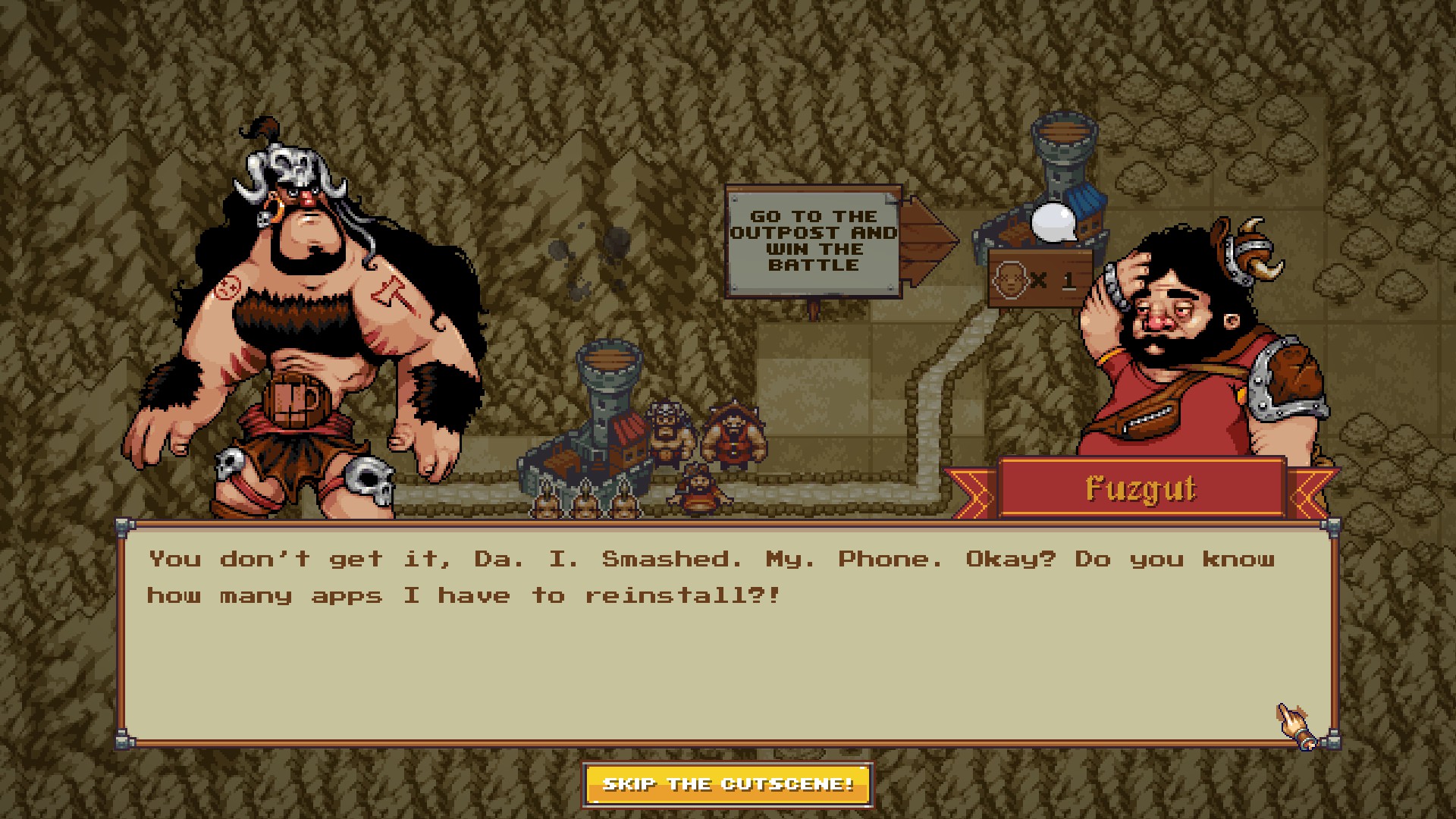 Initially the player controls the barbarian forces led by chieftain Brog the Barbarian.  Upon completing his conquest another series of battles unlocks where Fuzygut the Destroyer, Brog’s son, commands the angry barbaric horde.  Fuzygut’s campaign adds another layer of strategy by adding resources.  Meat and wood tend to go hand in hand in the barbarian lifestyle, these are essential items for battlefield dominance.  In Fuzygut’s levels wood is obtained by cutting down trees and it is necessary to rebuild barracks.  Meat is necessary to increase the number of available units.  Having to manage these resources on top of the regular battle planning adds a layer of complexity to the second part of Crush Your Enemies.

The primary objective for the majority of the game is to crush all enemy units in the level.  There is some variety to this formula.  An early level named after a Jimi Hendrix song (ok, Bob Dylan but who doesn’t prefer the Hendrix version?)  can be completed simply by surviving an enemy attack for three minutes.  However, for completionists there is an optional third objective to crush your enemies, and with some patience and strategy this defensive battle can switch to an offensive invasion.  As hinted at above, the levels are named after hard rock and heavy metal songs, which include artists such as Iron Maiden, Deep Purple, and Tyrant.  Each battle has three objectives that need to be completed, and each objective results in another head on a pike.  This feature serves as a respect meter as certain enemies will not engage you in battle if you are not in possession of a sufficient number of heads to be considered a worthy opponent.  Most battles are not incredibly difficult to pass, but getting all three heads can be a difficult feat on several battles.

If there is any doubt, this game does not take itself too seriously and it is better for it.  Humorous dialog occurs between battle, sometimes taking the form of the barbarian chieftain being disgusted with his son and his ineptitude when it comes to knowing what is best in life and prioritizing catching Pokemon over capturing his enemies’ heads.  Conquering breweries rewards the player with mugs of ale after each battle, because let’s be honest, if alcohol wasn’t fueling these barbarians they would be a rather boring, quiet bunch of chesthair farmers.  Alcohol serves as currency in Generia where it can be traded at shops for items that can be used to grant bonuses in battle.  These include drinks that temporarily double the power of a unit, portable tents that can be used to increase unit numbers in the field, and inflatable decoy barbarians.  That last one’s purpose will be left to the reader’s imagination.  Battles are ridiculously violent with blood and body parts flying every which way but it is presented in 16-bit graphics in a very cartoonish manner, kind of like if Looney Toons didn’t have censors to appease and featured actual people instead of a bunch of anthropomorphic animals.  Actually, there is some great crossover potential for these barbarians to join up with Elmer Fudd in What’s Opera, Doc? to help him kill the wabbit. 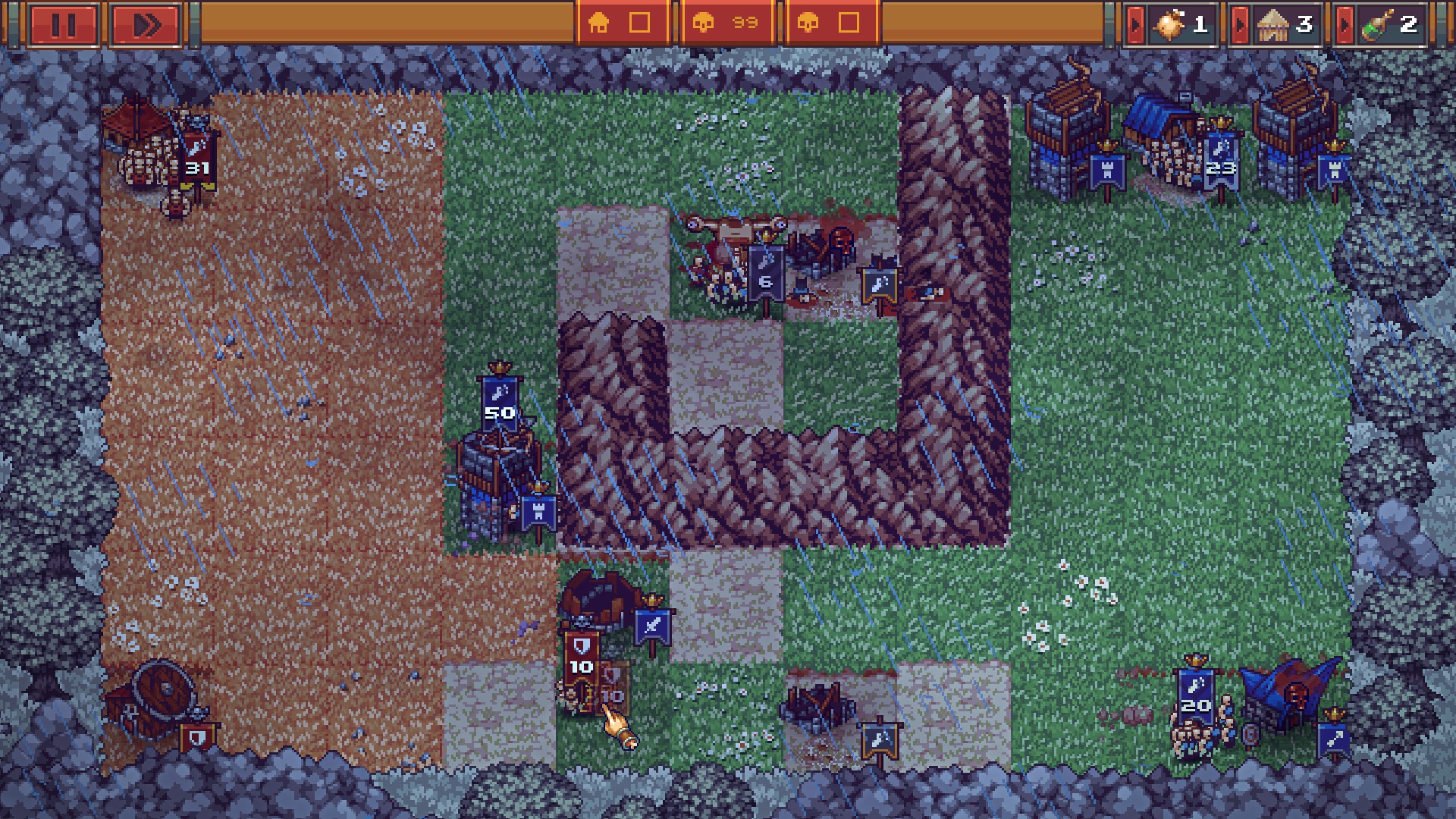 Generia is patterned after typical generic fantasy settings, so one would except that at the end of conquering the land one would fight a fire breathing dragon.  One could assume that, but no.  No, that would be wrong, if that is what was expected go home, take a shower, and wash the shames off yourself.  The big bad boss that is waiting is a Giant Death Snail.  Why is the boss a Giant Death Snail you may ask?  A better question is why not a Giant Death Snail?  How many other games include a face off against a headbutting Giant Death Snail?  This unprepared serving of escargot of mammoth proportions is more likely to crush than be crushed, but just the fact this creature is in this game is noteworthy.

The single player portion of this game offers numerous hours of strategic mayhem, but in addition to that multiplayer is included which is cross platform play between PC and mobile devices.  If crushing your enemies becomes tedious, take a break and crush your friends where the winner can drink from the loser’s skull (Hardcore Gamer does not suggest or condone any activity that results in drinking from anyone’s skull).  Kudos must be given to developers for making credits worth watching.  In addition to including a metal song, they give thank you to the world’s greatest actor, governor, and bodybuilder. 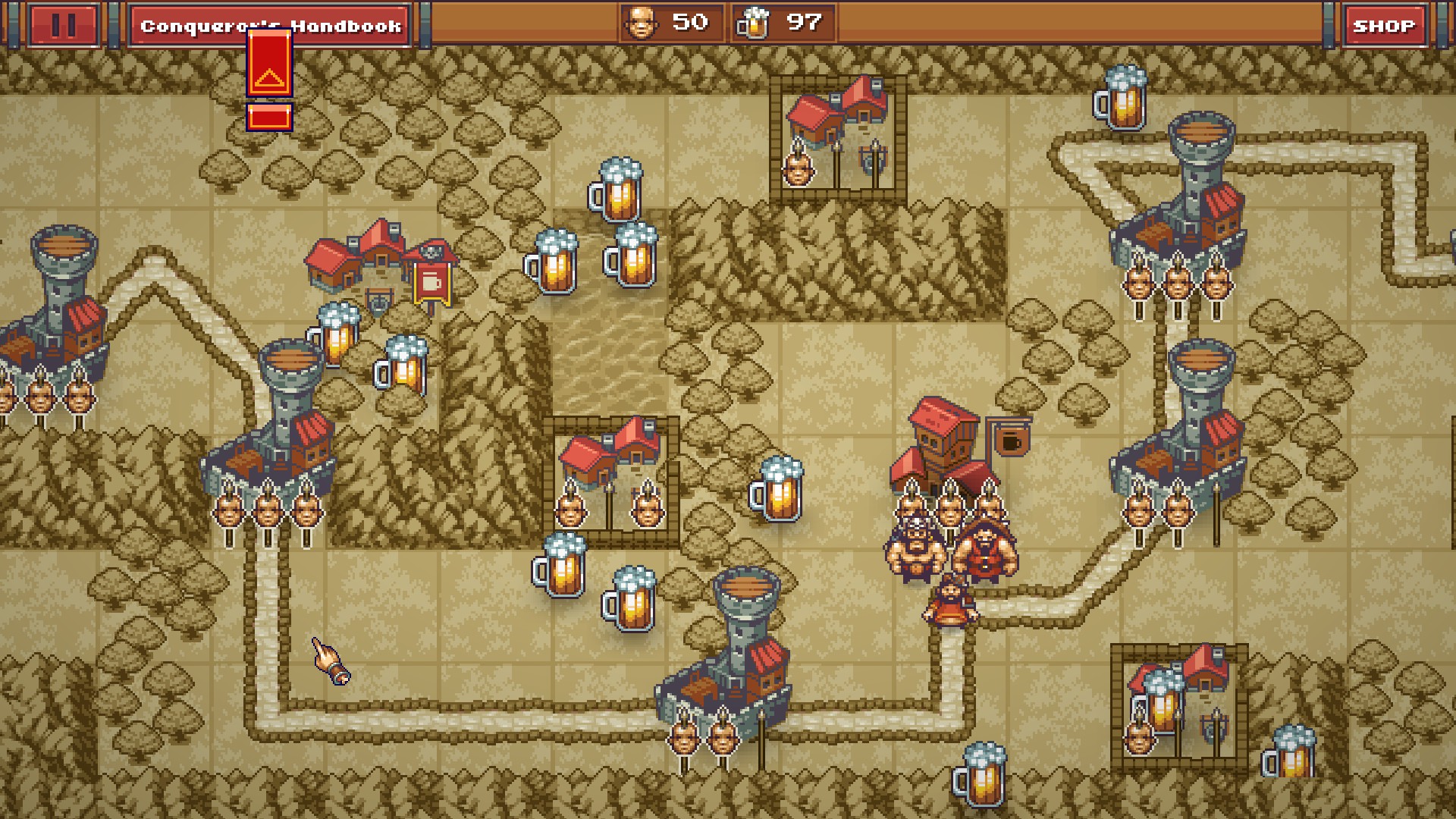 Crush Your Enemies is a fast-paced RTS that combines a need for strong strategy with pick up and play accessibility.  The short length of battles make this title suitable for short bursts of playing when you need to kill some time as well as extended sessions for when you just want to crush a lot of enemies.  The tongue-in-cheek approach to barbarian warfare only adds to the enjoyment.  The simplistic approach to an RTS is somewhat deceptive; it’s easy to jump in and start clicking your way to domination, but truly mastering the finer points will take some concentration.  With the increasing complexity offered in strategy games, Vile Monarch took a risk with an old school approach to Crush Your Enemies and making each stage a brief skirmish opposed to a drawn out epic battle as well as making the layout incredibly simplistic.  The reason this title succeeds is they were able to make such a streamlined RTS without sacrificing the need for a well thought out strategy to crush anyone.