In case you missed it, Necropolis, an eagerly anticipated roguelike with some serious Dark Souls influences, came out this week. Aside from the fact that there’s some genuine fun to be had exploring the mysterious procedurally generated dungeons in Harebrained Schemes’ newest game, what was supposed to be a simultaneous PC, PlayStation 4 and Xbox One release was shelved in favor of going PC only from the jump. Now, the PlayStation 4 and Xbox One versions of Necropolis are still coming sometime over the next few weeks (we hope), but the fact that an indefinite delay occurred less than a week before release doesn’t necessarily bode well for the roguelike’s console fortunes. Add this to the fact that Necropolis isn’t without its technical shortcomings on PC and it begs a very important question: should we be worried about the PlayStation 4 and Xbox One versions of Necropolis?

Let’s start with some of the basic logic as to why we should be a bit worried about Necropolis on PlayStation 4 and Xbox One, shall we? Video game delays are often a good thing, as they allow us to, ideally, receive a more polished product in exchange for waiting a certain period of time. Games like The Witcher 3 and Uncharted 4 would not be as wonderful without the delays that they suffered, and it’s likely that the delays to No Man’s Sky and The Legend of Zelda: Breath of the Wild will certainly make them more enticing than they would have been without their respective pushes. Still, most delays occur farther out from release than a mere handful of days, so it’s hard not to wonder whether or not publisher Bandai Namco wanted to save face at the last minute by not putting out a broken product. There’s nothing about a last minute indefinite delay that inspires confidence, and when you consider that the PC version has some noticable technical issues, it’s not tough to imagine some major technical issues leading to this delay. 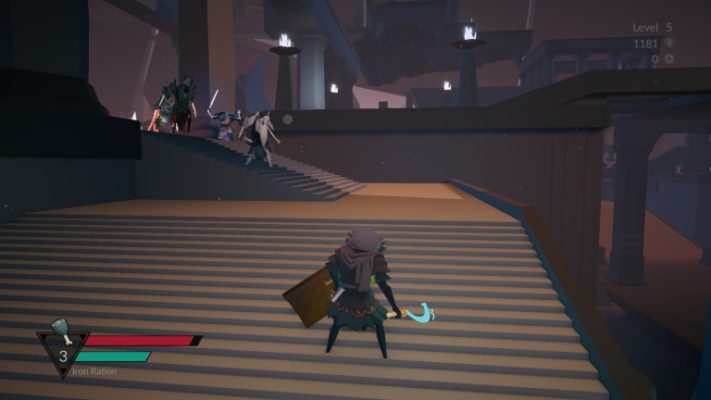 Of course, this is totally just speculation at this point. The only people who truly know why Necropolis was delayed on consoles are the people who are involved in its development and publishing. With that said, despite some of the really powerful hooks in the PC version, its inconsistent framerate, even on high end PCs, and occasional bugs can definitely send one’s thoughts racing. I’ve been playing Necropolis on a PC with an overclocked i5 4690k, a GTX 970 and 16 GB of RAM, and while this is no longer a behemoth compared to new custom-built PCs with GTX 1080s and 1070s, it’s certainly powerful enough to run pretty much everything on extremely high settings. To give you an idea, running Overwatch on Ultra at 144 frames-per-second is no problem, and whenever I review a AAA game on PC, you can bet those settings are going to be cranked up as far as possible without resulting to a sub-sixty framerate. The idea that breaking a few pots can send Necropolis’s framerate from 144 all the way down to thirty is pretty shocking, as are some of the frame inconsistencies during particularly chaotic battles. In addition to this, there are also reports of players falling through the world and certain menu elements related to storefronts simply not working. These, of course, are far more game-breaking than the frame-hitching I’ve experienced. Granted, these technical issues aren’t enough to completely ruin the experience, but they’re noticable enough to lead to some extrapolation on what could be going on on PlayStation 4 and Xbox One.

Obviously the hope here is that Necropolis’ last minute delay will turn it into the console port that Bandai Namco and Harebrained Schemes hope believe that it should be. Despite the mysterious circumstances surrounding its push back to later this year (though code is supposed to be sent out to outlets within the next couple of weeks, allegedly), Necropolis is a title that has some definite potential. The idea of keeping it on your console dashboard and booting it up whenever you want to have a quick Souls-like run is tantalizing, so hopefully things come together shortly. Still, there are far more questions than there are answers at this point and that doesn’t bode well for Necropolis on PS4 and Xbox One.