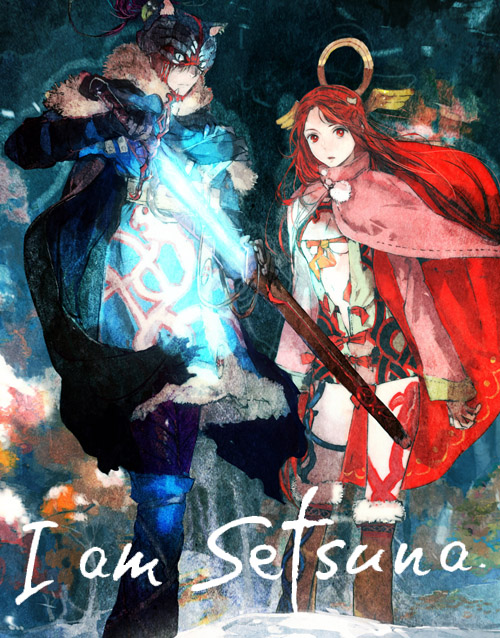 If there’s one thing Square Enix is known for, before and after their merger, it’s their groundbreaking RPGs. While Square’s approach was aimed at developing games in-house — and to great success considering releases such as Final Fantasy, Secret of Mana and Chrono Trigger propelled them into stardom — Enix relied on other developers to do their creative work. Despite their differences, both approaches were successful and created some of the best RPGs available, so it’s not surprising some developers would want to go back to what was the Golden Age of Japanese RPGs. While the core of Square Enix seems to be adamant about moving forward with the action-RPG genre, they have created a smaller studio by the name of Tokyo RPG Factory to better facilitate and feed off the nostalgia of gamers from the 90s. Their first project is just that, crafting a game with familiar mechanics and an adventure that promises intrigue and emotion.

I Am Setsuna is essentially a mash up of all your favorite Square RPGs of the 90s and early 2000s. The core battle system is inherently Chrono Trigger, with even the first combo attack you learn being X-Strike, a combination of Cyclone and Charge. It’s so on the nose that Square Enix may as well have given Tokyo RPG Factory the Chrono name, but that’s not the only game they’ve borrowed from. Final Fantasy X’s core story feels ingrained in I Am Setsuna. Let me know if you’ve heard this before: an unsuspecting hero crosses paths with a young woman who has been chosen to sacrifice herself in order to give the world ten or so years of peace. You’ll also meet a scruffy yet heavily experienced teammate who wears a loose haori, has a scar going down one of his eyes, and wields a colossal sword with one hand while idly resting it on his shoulder. He also happened to be one of the travelling companion of a previous sacrifice during their pilgrimage. That paint a good picture? Originality is not I Am Setsuna’s strong suit as it heavily borrows elements from, granted, some of the best RPGs available in Square Enix’s catalogue with only implementing a couple of its own traits. 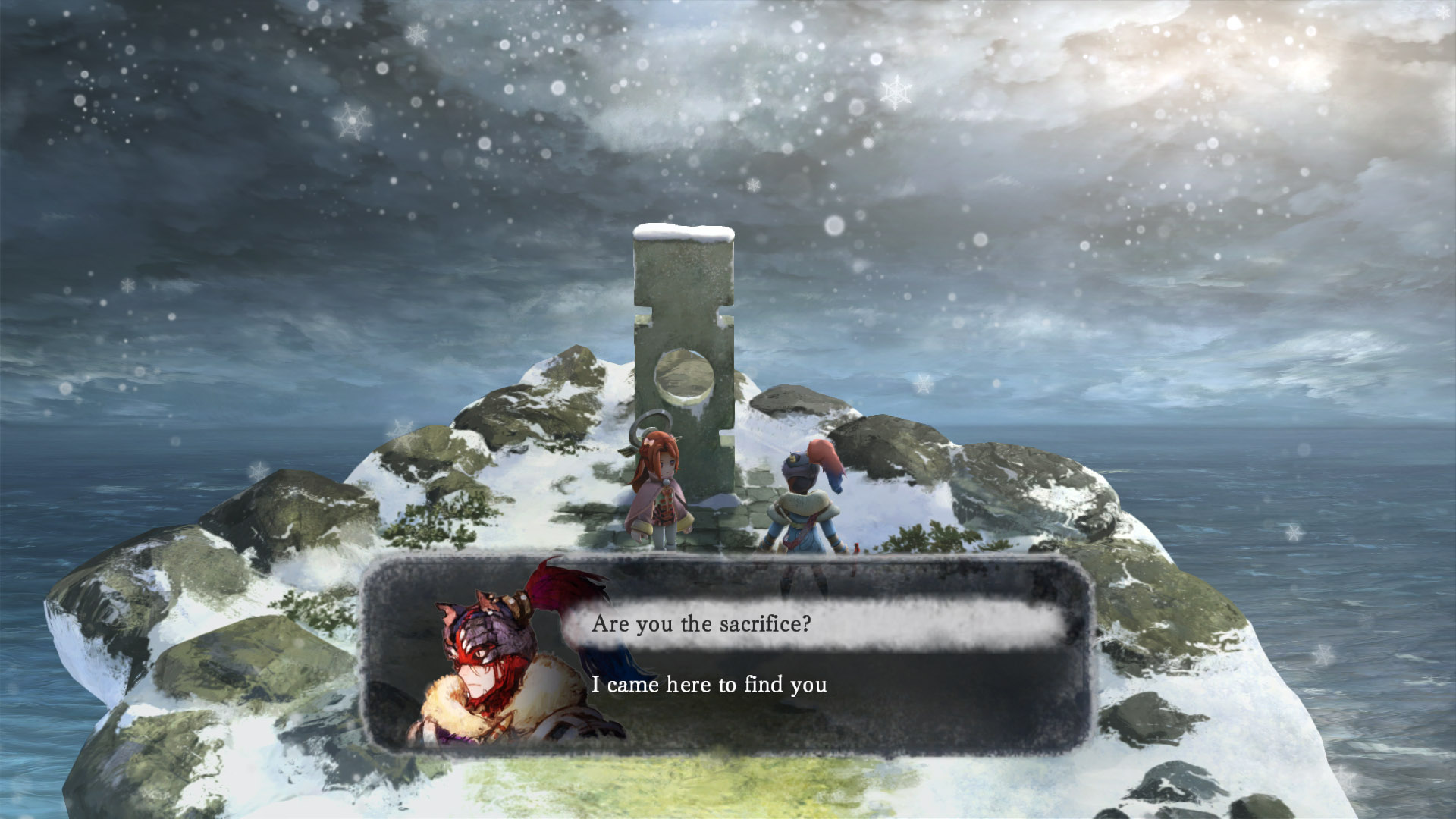 I Am Setsuna has been built as an emotional tale about a young girl sacrificing her life for the greater good, but a lot of it doesn’t quite come together properly. Everything feels like it’s moving at an overly quick pace, not letting the story and characters breathe, causing a lot of the events throughout the campaign to have little impact. You rarely get to know any of the characters outside of their quick, one-off segments, and even then, most of those occurrences feel shoved in purely to have some vague context. It’s a real shame as there are a couple characters that could have been interesting additions to your party, but alas, nothing is properly explored and they become generic, banal individuals. Even the silent protagonist does absolutely nothing to express his motives, along with Setsuna who has the heartwarming personality of Yuna from Final Fantasy X, but expressed in such a lifeless, hollow manner. In addition to all of this, there’s also a lack of a true villain. There’s one individual who’s constantly on the prowl that the party will run into from time to time, but he’s more of a nuisance than an actual threat. Overall, the story is far too shallow for anyone to care about the characters, especially considering how underdeveloped and generic they are. It presses on far too quickly and fails to establish the emotional connection it strives for.

As stated above, Chrono Trigger is a large influence to I Am Setsuna’s combat system. There’s no random battles, not even in the empty overworld, but instead enemies will appear in specific locations in dungeons for you to go head-to-head with, or avoid completely (although it can be tricky considering the majority of the areas are very enclosed pathways). There’s no load times in this respect as once a battle is initiated, the party of three will be right into the thick of things. It’s entirely turned based with an ATB gauge slowly filling up after each action, but what makes I Am Setsuna unique is the momentum system. Instead of attacking right when the ATB fills up, another meter will slowly generate Setsuna Points. These can be activated when attacking to distribute additional strikes on enemies, add special effects to your blow, and even recover some HP, all depending on what technique is used. 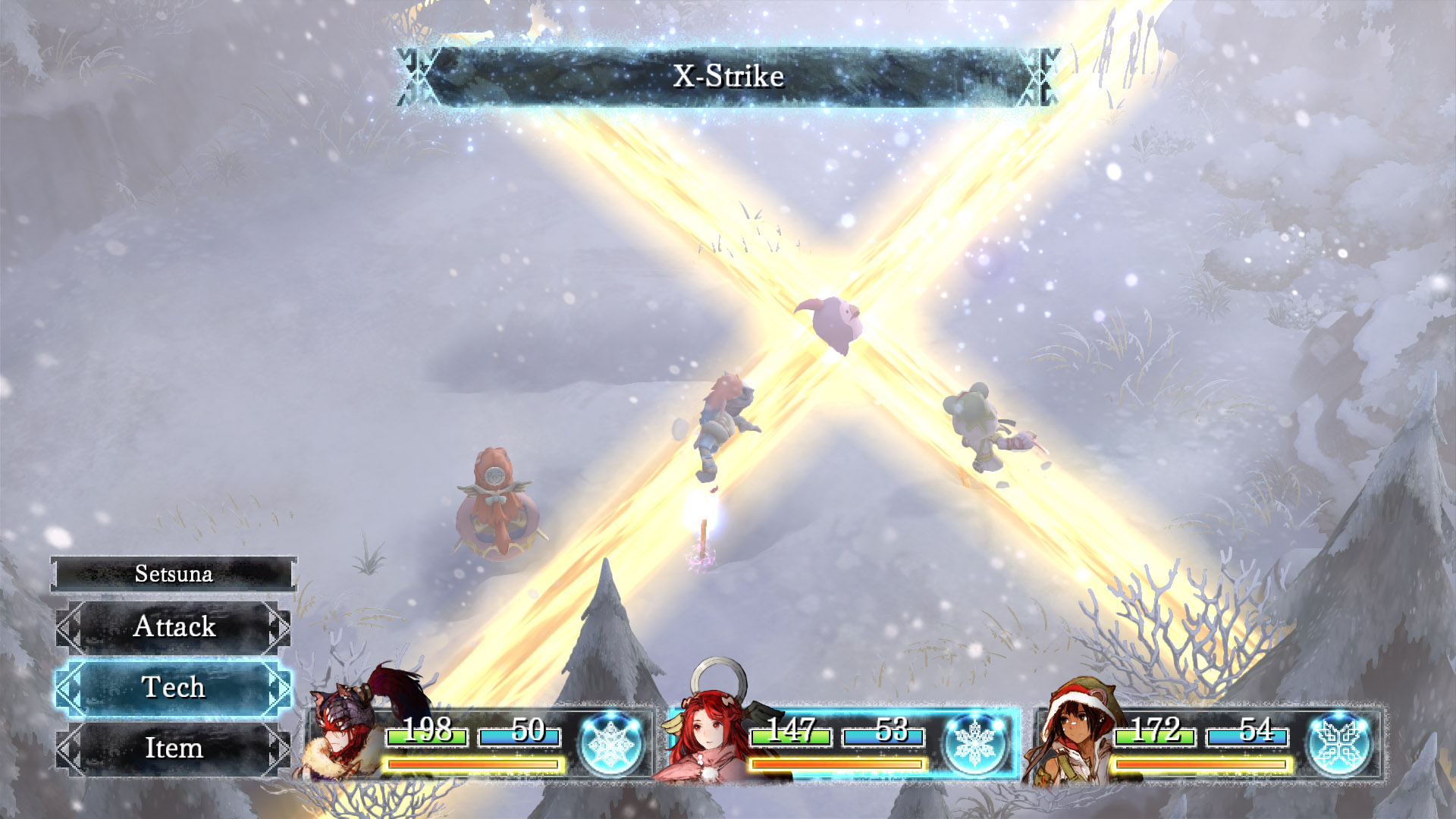 The biggest problem with this combat system, though, is that it becomes excruciatingly stale a couple hours in, and while it’s a modest twenty-five hour long adventure, each battle will begin to feel like a chore as the story goes on. This might have something to do with the scenario setups in battle never really changing, and the vast majority of the dungeons being incredibly one-note. It’s more or less all straight pathways to slightly more spacious areas to facilitate a single battle. The combo system, which was pulled directly out of Chrono Trigger, does liven things up a bit as, instead of obtaining skills through levels, it’s tied to the RNG drops of each encounter. Unfortunately, this brings up one of the most annoying aspects of I Am Setsuna: the item management system. While most of the UI is done fairly well, selling all your unwanted material and trading them for Spritnite is a giant pain in the rear. The Spritnite list will become insanely long, taking forever to actually go through to see which techniques or supporting abilities have not been obtained yet.

From a presentational standpoint, I Am Setsuna has a charming appearance that’s unfortunately weighed down by its repetition. Similar to the combat, the environments of the world get old very quickly. As someone who absolutely loves winter and snow based settings, I Am Setsuna is just too much. No one place feels distinct from the rest of the world, with towns basically copy and pasting interior designs and relying on similar, if not the same models throughout. Even the futuristic ruins that try to depart from the cold atmosphere somehow make things worse, with the most generic and unappealing aesthetic. At the very least characters designs are distinct from one another, despite all of them being peg-legged, and have a similar allure to Final Fantasy IX’s chibi models. Fortunately, the sound department holds up a little better as, while a number of I Am Setsuna’s tracks seems to be overused and overemphasized in a number of situations, it holds up surprisingly well. It’s virtually an exclusive piano score throughout the entire game, filling the trite story with a little more emotional appreciation. 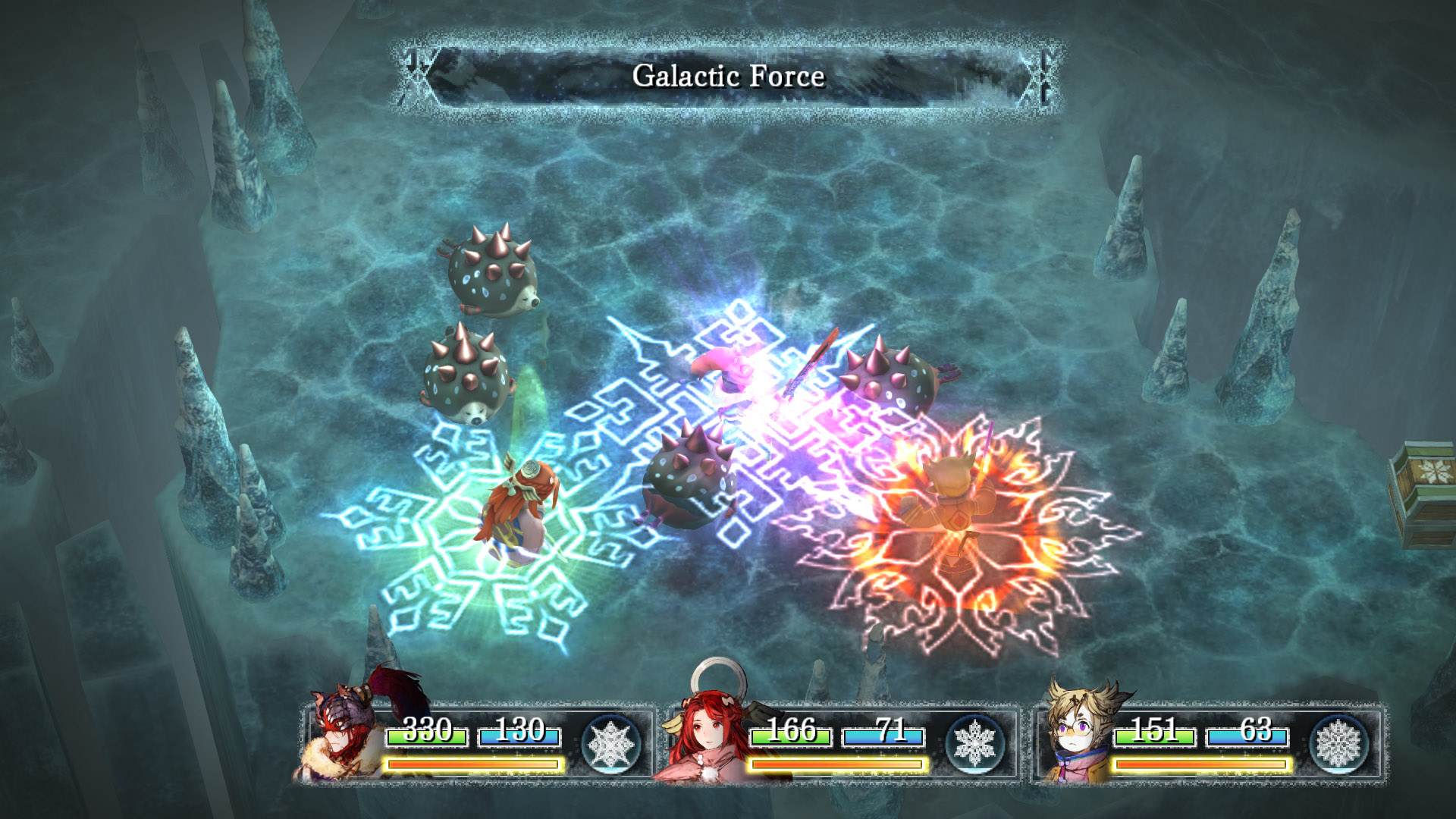 I Am Setsuna seems like the perfect game for those missing the Golden Age of Japanese RPGs, but unfortunately it has been painted with a shallow brush. The story moves at an uncontrolled pace, never truly developing any of the characters or their motives, and fails to establish the emotional connection the developers were aiming for. The combat, while brings back memories of the good ol’ days from classic RPGs, becomes dull at a rather quick rate thanks to the one-note encounter setup and unvaried dungeon layouts. From the presentation side of things, the soundtrack has a well-executed selection of piano melodies, but the visuals become overly monotonous. Who would have thought a game with a snowy setting such as this would look so dull? There’s some good to be discovered in I Am Setsuna, but it’s overshadowed by its sheer unoriginality and repetitiveness.