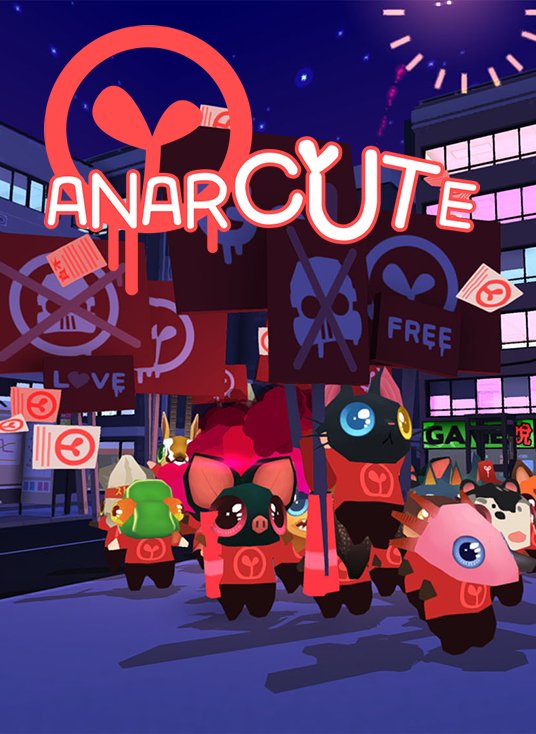 We’ve always known the revolution would be televised, but it comes as something of a surprise that it’s adorable too. The animal-citizens of the world have been gently enslaved by the hypnotic glare of the media, which operates under control of the conglomerates of the world.  The police have been bought and paid for, justice from the corporatists is nonexistent, and the time to take back the world by breaking all the things is now!  Join the mob, grab some debris and get rioting, because the world can’t be freed any other way.

Anarcute is a game of urban unrest that wears its cuteness like a half-forgotten mask.  The cheery tunes, primary colors, and cute critters put a friendly face on the rampaging mob, but the tidy city is a disaster area when you’re done tearing ventilation units off buildings, knocking down fences, blowing up cars, and even knocking down entire buildings.  The city looks like a mob tore through it at level’s end, but then again it was only ever a comfy cage to keep the populace in line so to hell with it.  Down it comes, and any police or military who stand in the mob’s way get to come down with it.  As destructive as casting off the chains of a world that’s designed to kill freedom by keeping its populace chained to the tv and watching ads may be, it’s also a lot of fun to bring society tumbling down.

You start as a small group of critters, and they move as a single unit without any direct control over the individuals.  Walking the crowd over a traffic cone, air ventilation unit, or any number of other background items knocks it from its base, allowing it to be picked up by the nearest member of your horde.  Pickups come in a couple of types- regular throwable items, bigger and more explosive items like cars, and weapons scavenged from defeated police.  Getting close to an enemy brings up a target around it, and a pull of the right trigger sees a regular item fly towards the noble defenders of the authoritarian state.  Smaller items do minimal damage while bigger ones are more effective, and though you don’t have direct control over who throws what the game is smart enough to toss out the most effective items first.  The left trigger is reserved for the explosive items, because you don’t want to waste a heavy impact on low-level law enforcement when there’s riot police nearby.  The mob also has with a regular attack, causing the citizens in range to punch together as one.  It’s riskier than throwing something, of course, because it puts your guys in range of a counterattack, but very effective when you don’t have time to chase down more throwable debris. 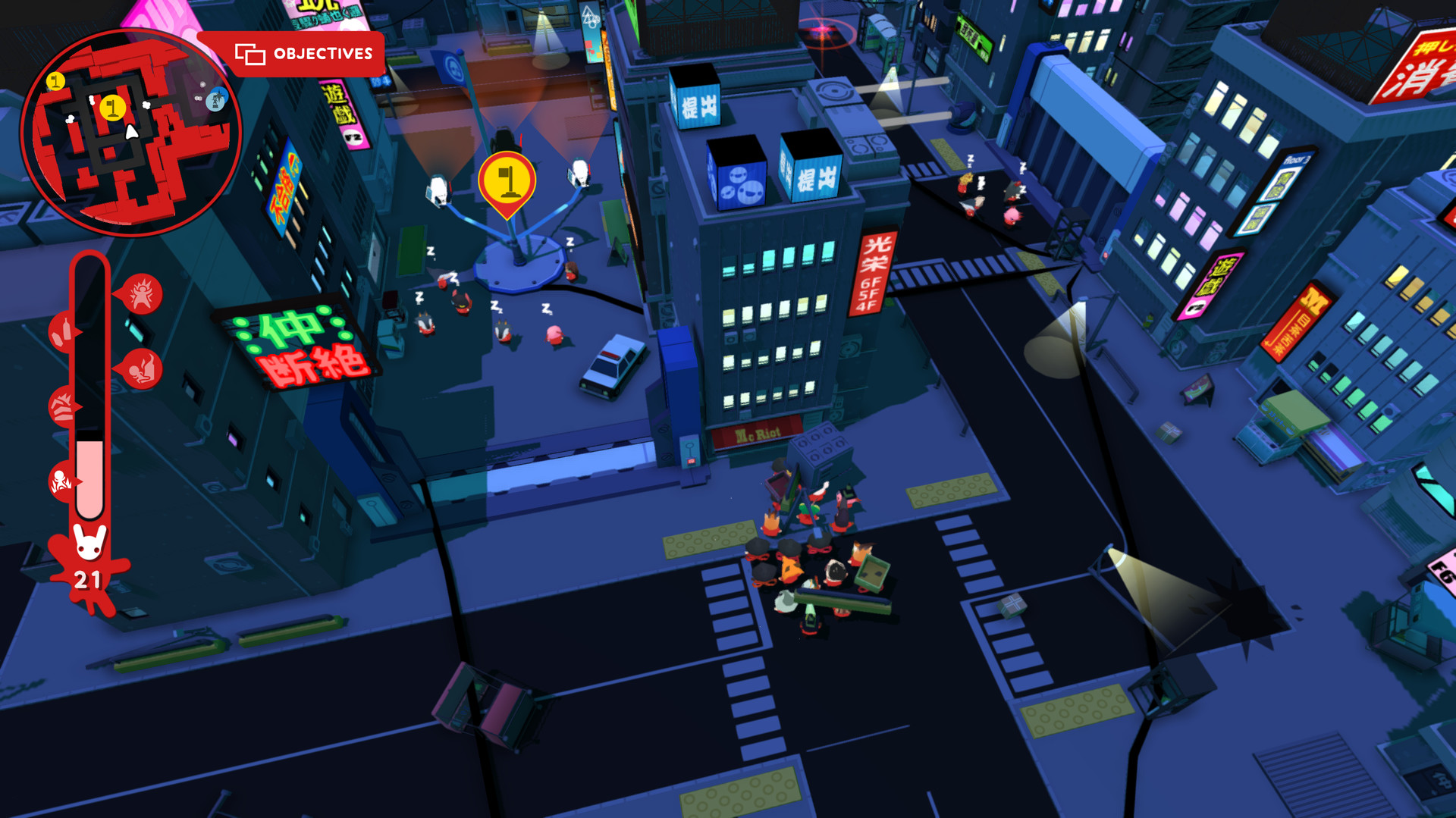 The riot starts out relatively small in most levels, but as it rampages through the streets there are plenty of citizens to wake up and add to its growing might.  Some are locked in cages guarded by police, mine fields, or lasers, and others are just hanging around sleeping until a passing mob stirs the passionate fires of revolution in their souls.  As the riot grows in number it also gets stronger, with new abilities being added the bigger it gets.  There are six abilities total, with three being predetermined and the others selectable, although you’ll need to buy the latter with coins earned from completing new levels.

Your mob has a dash move right off the bat, helpful for getting out of trouble quick, and the punch and throw moves are there as well, but once the horde starts growing more options open up.  A stomp move comes fairly quickly, which sends out a shockwave stunning any enemy in range.  Doubling the size of the riot from there earns the ability to knock over buildings, which is great for taking out snipers that might be perched on top or just dumping the debris on the cops on the other side.  Get a big enough crowd and you’ll get infinite projectiles, although they tend to be of the smaller type that don’t do a lot of damage.  The purchasable items also come in three tiers, with abilities enhancing speed, stomp power, and even the power to charm cops to join your crew.  A fully-powered riot is practically a force of nature, but a fragile one that can be cut down to size fairly easily if you’re not careful. 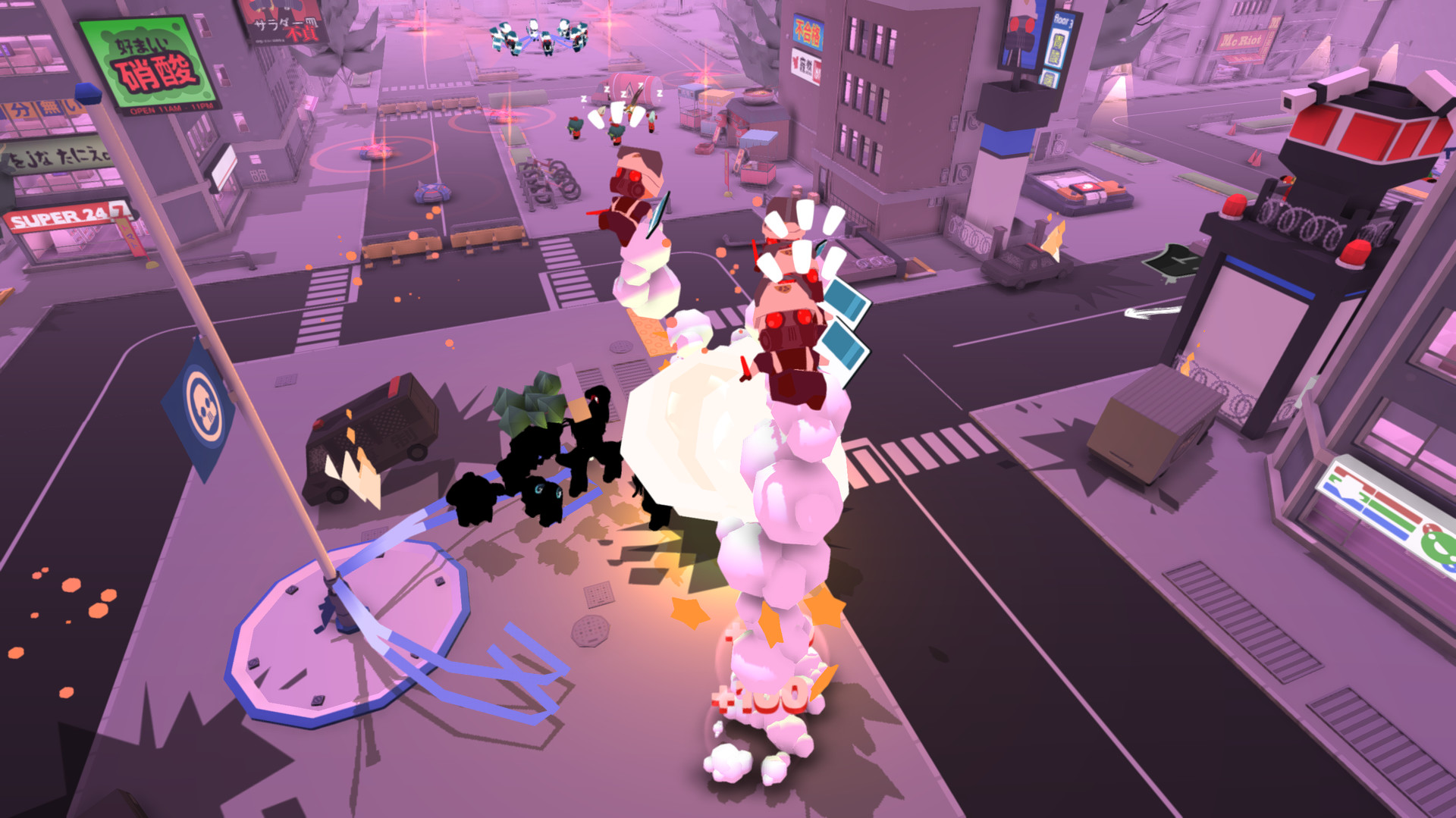 The riot acts as a single entity but it’s comprised of individuals, and they can only take a couple of hits before they fall down.  Mis-time a dash across an intermittent laser trap and you can easily leave a row of bodies across its line of fire.  Don’t dodge a grenade, get out of the way of a spinning spiked ball, or screw up avoiding an enemy’s dash attack and half your force might be eliminated.  The law may be as cute and almost as colorful as the rioters but they’re just as dangerous if given a chance so swarm tactics are a bad idea.  Anarcute encourages scoping out the encounter before charging in and coming up with a plan to weaken the enemy first.  Whether that’s throwing an item then dashing behind a row of mines, or grabbing a car and timing the throw to take out a handful of cops at once, there’s almost always a better plan than simply charging straight in.  Sometimes that plan is “throw items and run away”, but it doesn’t have to be complicated to be effective.

Once you’ve cleared out all the police and captured all the flags in the map Anarcute tallies up your speed, mob size, and how much law enforcement you eliminated to calculate your ranking, and thankfully it’s pretty generous with the S-ranks.  Speaking as someone who doesn’t like to rush, it’s good to know that if I take out all the cops and have a huge band of rioters it doesn’t matter if I go sightseeing, or look around a bit to plan the best avenue of attack.  Each level is its own little scenario with some interesting encounters if you take the time to think about them, and the action is made all the better by seeing the traps and turning them around on the enemy.  Later missions require this, in fact, because those final areas are very well guarded and security will cut your force to ribbons.  It’s only real weak point is the story, which is told in a series of wordless cut-scenes that, honestly, are a bit confusing in places, but Anarcute‘s focus on its gameplay overcomes the narrative weakness. 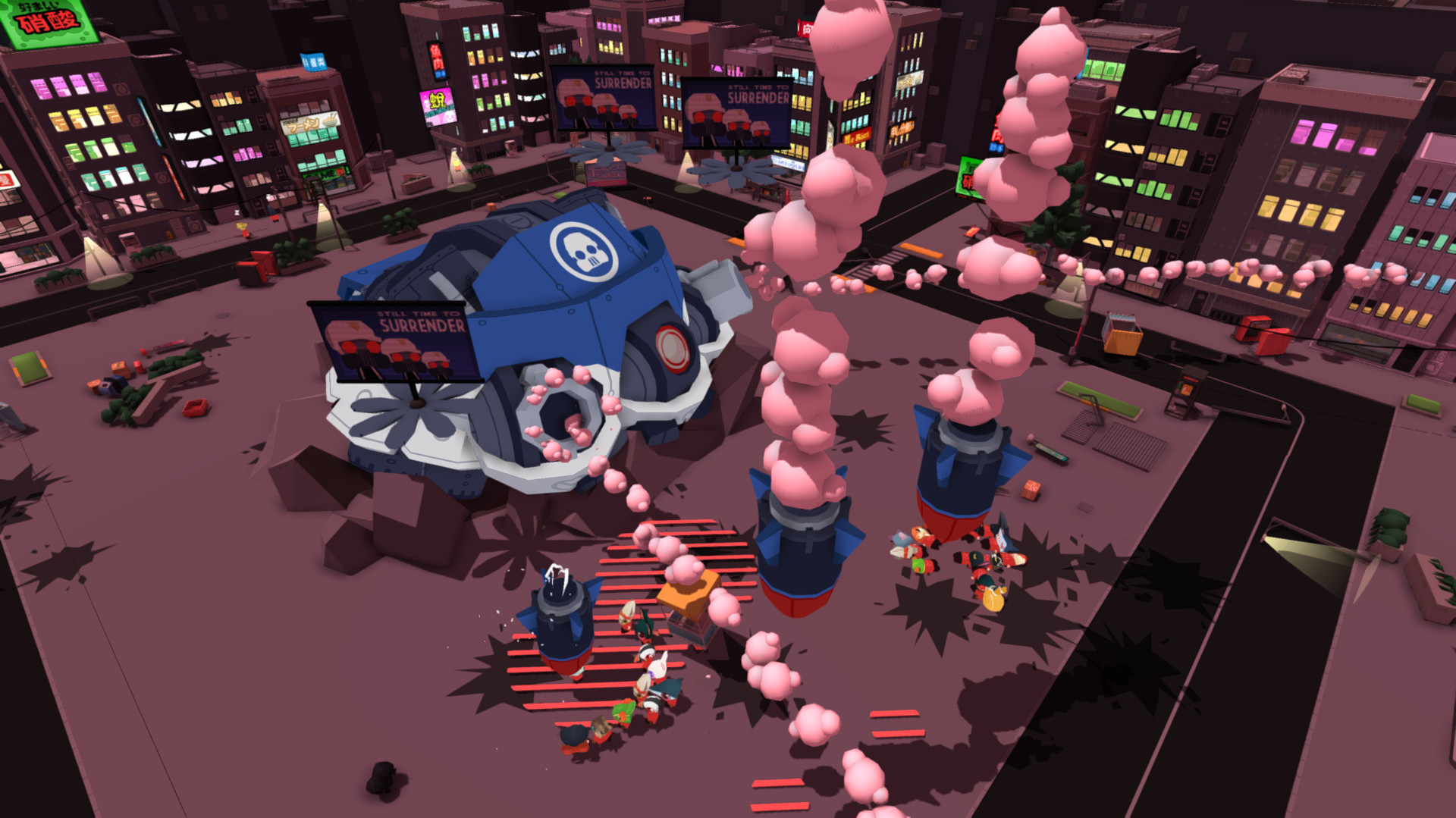 Anarcute is a warm and fuzzy, utterly adorable game that plays with mob violence and social unrest.  As cute and charming as the animals and their oppressors are, at no point does it try to hide that you’re controlling a mob tearing apart a town and taking down law enforcement along the way.  It’s a lot of fun, not even slightly disturbing while playing and there probably isn’t anyone who plays games who hasn’t overthrown a government or two along the way, but usually not in a way that’s so close to actual news headlines.  That gives Anarcute an edge that a lot of hyper-gory and violent games never earn, but the important thing is that it’s just fun to play.  Anarcute has the feel of a good 16-bit game in its structure and design, and each level feels crafted to give the player a lot of options to get past its unique challenges.  The revolution may be adorable, but it’s also an excellent challenge, and while society needs to be free of its manipulative overlords, they’re not going down without without a lot of incidental property damage.