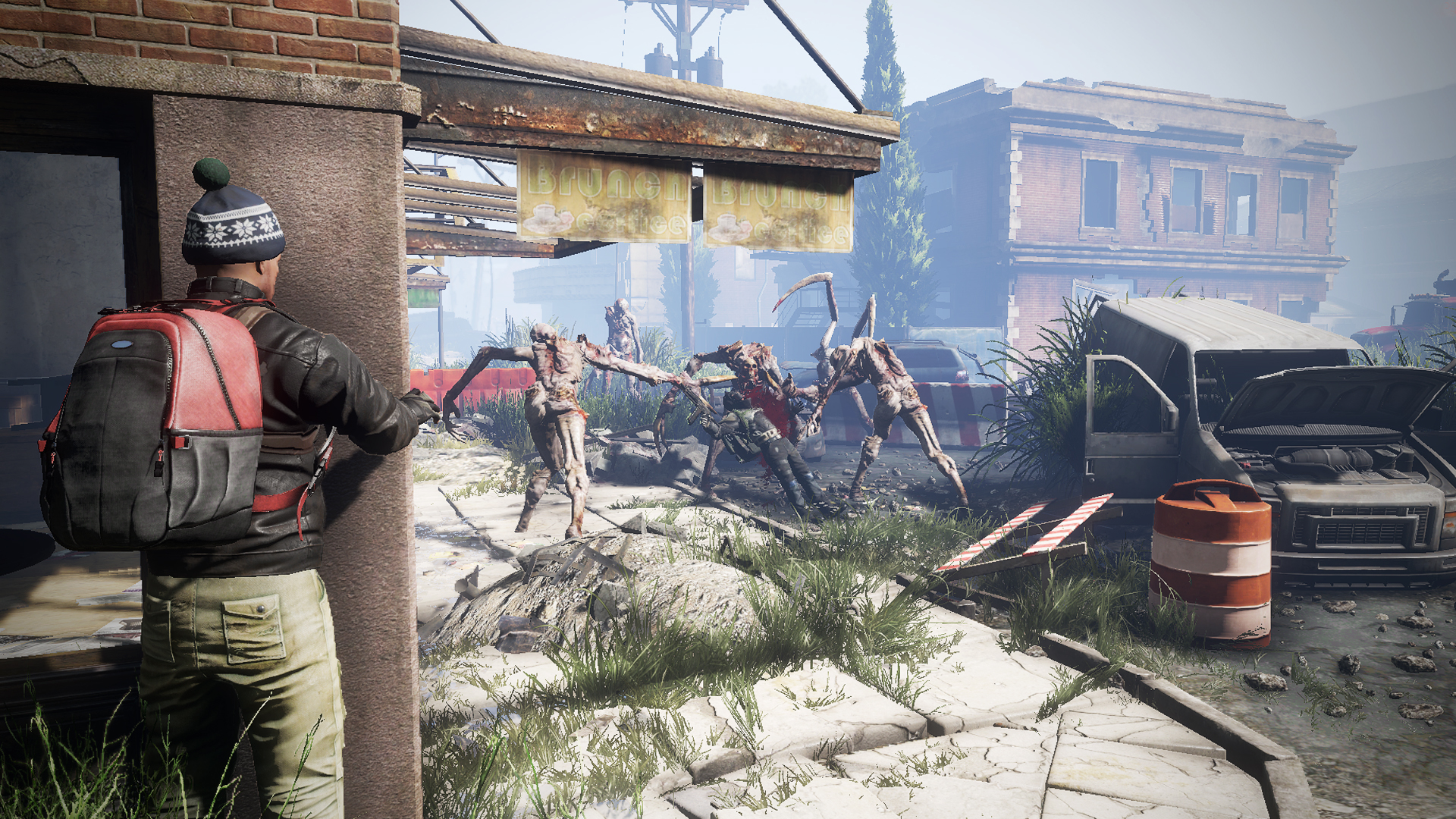 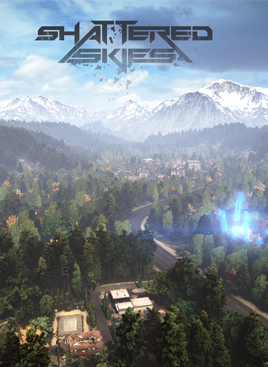 Since the popularity of the DayZ mod for Arma II in 2012, we’ve been subjected to a torrential outpouring of sandbox survival games sharing similar concepts. Shattered Skies is one such game. Created by Free Reign Entertainment, developers of the controversial Romero’s Aftermath (aka WarZ), Shattered Skies describes itself as a “massive, persistent, open world shooter MMO featuring full loot drop and dynamic PVP objectives for solo or team play”. While holding true to some of that, the game doesn’t quite hold up to the entirety of the description.

Upon launching Shattered Skies, the player finds themselves in a random location somewhere on the game’s reasonably sized map. Depending on server population, the player might be sharing the space with up to seventy other players all of which are probably intent on killing you on sight. Having spawned in, with no prompts or information other than a few obscure symbols on the screen, the player must then discern what they should do next. Checking out the player status menu, a levelling system is apparent. What isn’t apparent at initial viewing, is that levels are used to access certain weapons, armor and crafting recipes. So, there’s that. If it happens to be night time when the player spawns, a shattered moon can be seen hanging in the sky —hence the name— giving at least some reason to investigate the surroundings. Exploring said surroundings may yield a few different things. It may lead to the discovery of one of the numerous deserted towns in the area. It might also lead to the discovery of an objective location. Deserted towns offer loot of various kinds. Food and drink, necessary for surviving, can be found in these dilapidated buildings and among abandoned cars cluttering the streets. Materials for crafting can also be found, as well as weapons, armor and ammunition. In fact, the latter three tend to make up the majority of loot. Shattered Skies almost follows an ‘any loot, anywhere’ ethos. Automatic weapons can be found in construction sites, on roofs, inside cars or on the ground. Pistols are everywhere, while shotguns litter barracks and kitchens alike. It’s all a bit haphazardly mish-mash.

Exploring the towns of Shattered Skies inevitably turns into an encounter with the ever present alien threat. Because that is how the moon got destroyed. Maybe. So, assuming the moon was indeed destroyed by aliens or something, one could be forgiven for assuming that these aliens were pretty powerful. Well they aren’t. At least, not unless your legs have somehow ceased to function and you find yourself with a complete lack of weaponry. Rather than being a threat, the aliens become more of an irritant. Irritating in that they will teleport to your location with no warning from an unknown location for an even less apparent reason. Once teleported to the player’s area, these moon-killing super-beings will run straight to your location regardless of player concealment. That is, unless you’ve walked up a slight incline onto a roof or something. In this case, they’ll simply stand nearby and shoot what seem to be sparkly energy balls at you. Because these moon-killing, teleporting super-beings are somehow unable to discern the path you’ve taken in order to close the distance and utilize their much more effective melee attack.  Speaking of super-beings, it takes one or two encounters to work out that if the player runs a few hundred feet from the teleport location, the alien will simply stop chasing and stand passively, allowing the player to pepper it with bullets from complete safety. 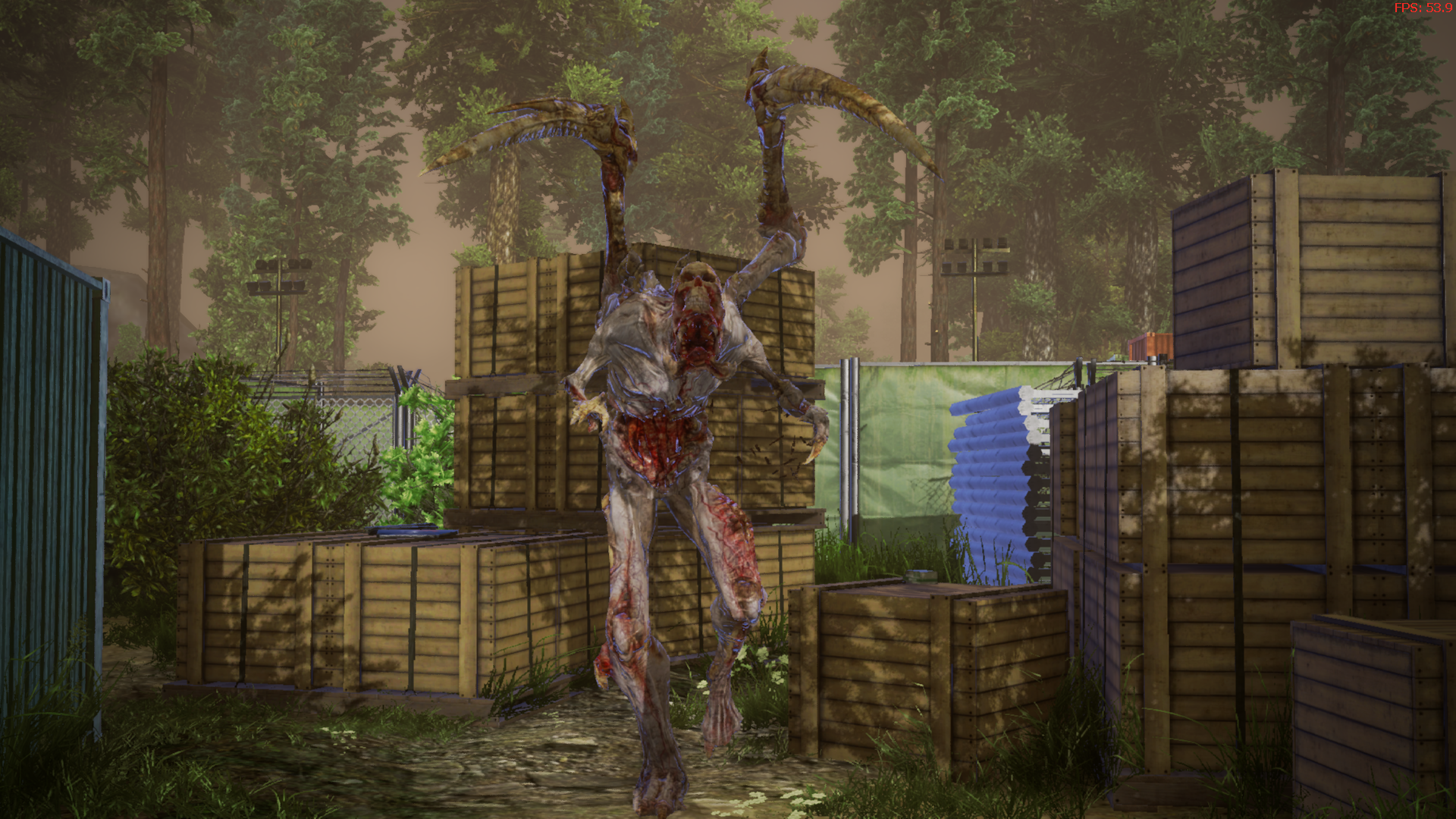 With the aliens acting as more of a nuisance, the main threat in Shattered Skies comes in the form of other players. Player encounters happen regularly, especially on higher population servers as the map size in Shattered Skies is vastly overrated (it only takes a few minutes to traverse its entirety). The majority of player encounters in the world lean toward instantly hostile. Shots are fired early and often. If players do manage to be close enough for verbal contact, the result is usually a stunted conversation ending with a shot in the back. Unfortunately, the only incentive for cooperation is to defend against or kill other players. The death of said other players is also generally a good thing. The majority of the victim’s inventory is dropped upon death, allowing the victors to gleefully loot the body of useful weapons, ammo and items. Certain items are not dropped, however, with legendary weapons and armor staying with the owner as the respawn and simply degrading over time. Event rewards are also exempt from dropping upon death.

Other than looting towns, hunting other players and exterminating incredibly basic aliens, Shattered Skies also offers various objective based tasks. Spread between serving three factions, the tasks are incredibly basic.The Brotherhood of Chaos offers reputation for destroying specifically marked objects throughout the world, the Merchants Guild requires the player to repair and activate MG Uplink Stations while The Dominion requires you to repair and activate Dominion Roadblocks. Repairing and activating tasks consist of standing next to the relevant broken component and holding the action button. After a period of time, the broken component becomes repaired, allowing the activation and completion of the task. Rewards and reputation effects are bestowed to the player upon the completion of each task along with an increase in reputation for the served faction and a decrease in reputation for the two remaining. Reaching certain reputation numbers cause the player to level up their relationship with the factions, unlocking vendors and making various items available for purchase. Apart from these standard, incredibly dull and uninspired faction tasks, an event dubbed Dominion Reactor becomes available every few hours. Requiring a group to complete, the event pits players against aliens and other groups of players as they attempt to activate (hold action button next to) the Dominion Reactor for the purpose of….getting loot. Upon completion, the winning group does indeed get loot. They also get a large experience dump. The event is then inactive for another few hours before the process is repeated. 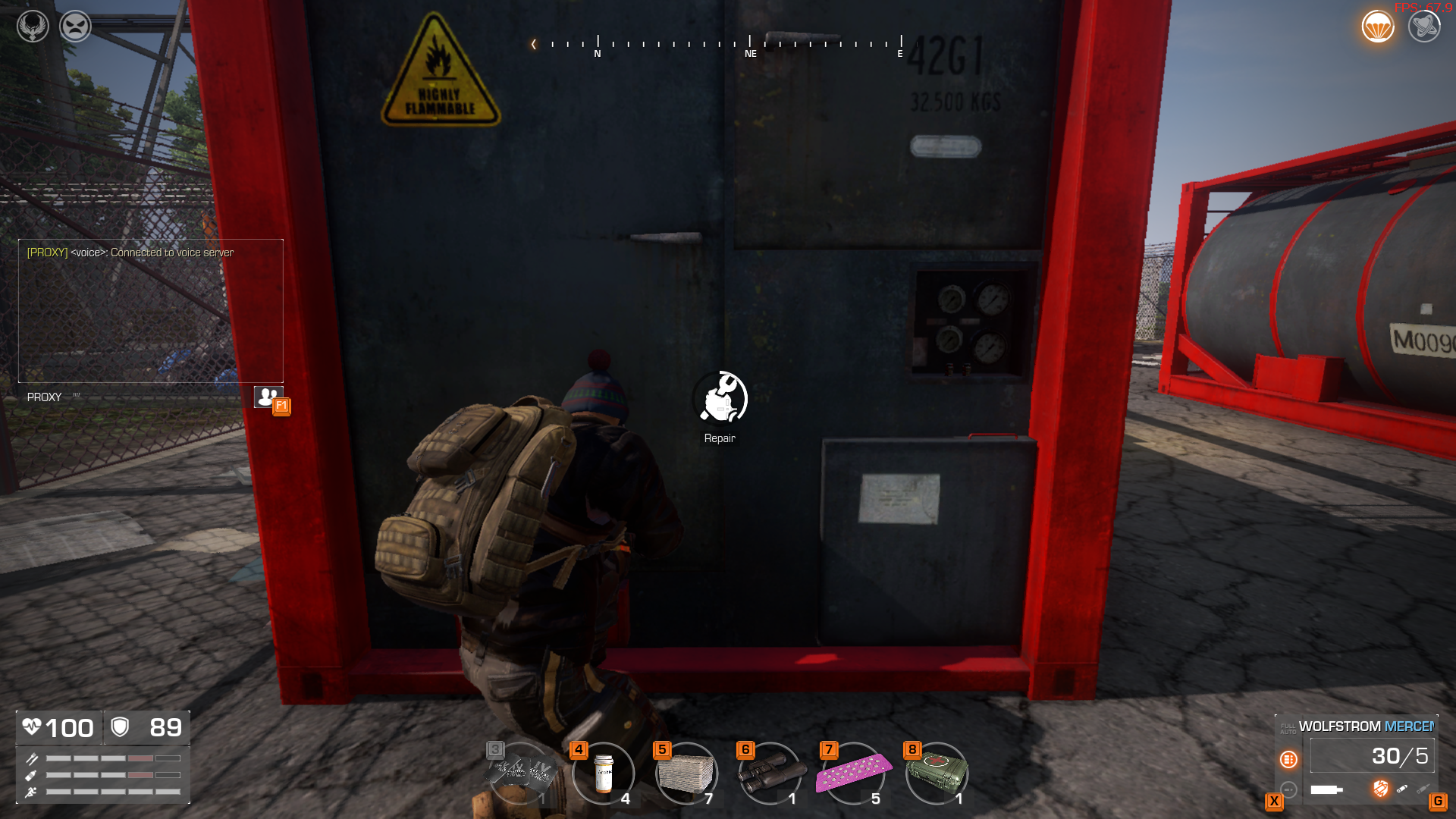 The completion of the Dominion Reactor event exemplifies an issue which is evident throughout the entirety of Shattered Skies. That is an almost complete lack of purpose and reason to be doing whatever it is that the player is meant to be doing. The motives of the three factions might be somewhere, however, they certainly aren’t evident in-game. The aliens aren’t enough of a threat to warrant what seems to be the complete ruination of society and the players don’t even drop their best loot when they are killed. So why are the people killing each other? The entirety of the gameplay feels like a blatantly artificial cycle of doing things to get more stuff to do the same things better next time to get more stuff to do the same things again but better. For a game with a potentially interesting premise there just doesn’t seem to be any direction.

As far as appearances go, Shattered Skies can probably be considered on par with other games in the multiplayer sandbox survival genre. Running the game on Ultra settings with a GTX 970 leaves the game looking decent. Games like Ark: Survival Evolved are significantly prettier while games like Rust are a bit rougher in comparison.  Apart from a few muddy textures and longer distances becoming dark and blurry, the overall aesthetic of the game is at least serviceable for its purpose while maintaining a steady frame rate of above 80fps the majority of the time. The main visual issue we noticed was animation continuity. Actions like jumping and punching suffer from obvious breaks when viewed in 3rd person.

Unfortunately, the sounds in Shattered Skies can only be described as terrible. Hugely noticeable issues plague the entirety of play. The player’s overly loud footsteps often fail to match the environment while ambiance volume varies and can sometime go missing altogether, leaving complete and utter silence despite the player surrounded by a multitude of sound sources. Aliens only make vocal noises and are conspicuously missing footsteps despite their massive size. The most notable transgression is the frequency of sounds without sources. The player might be walking through a deteriorated building when, from the next room, comes the sound of what seems to be three children playing football with a spray can. Upon investigation, the room contains absolutely nothing. These sounds, along with random bangs and the sounds of movement, are all evident throughout the entirety of indoor exploration. It is an issue that causes a complete disconnect with the surroundings and subsequently, large portions of the game. Furthermore, Shattered Skies contains no music. This usually wouldn’t be an issue, however, in the case of Shattered Skies, the absence of music only serves to emphasize the poor overall quality of the remaining audio.

Throughout our time with the game we encountered a handful of bugs, from spawning underneath the map, to the game hard crashing both when a friend was added via the in-game menu and when we completed a faction objective. These crashes are further magnified when one considers the exorbitant load time required to enter a server. 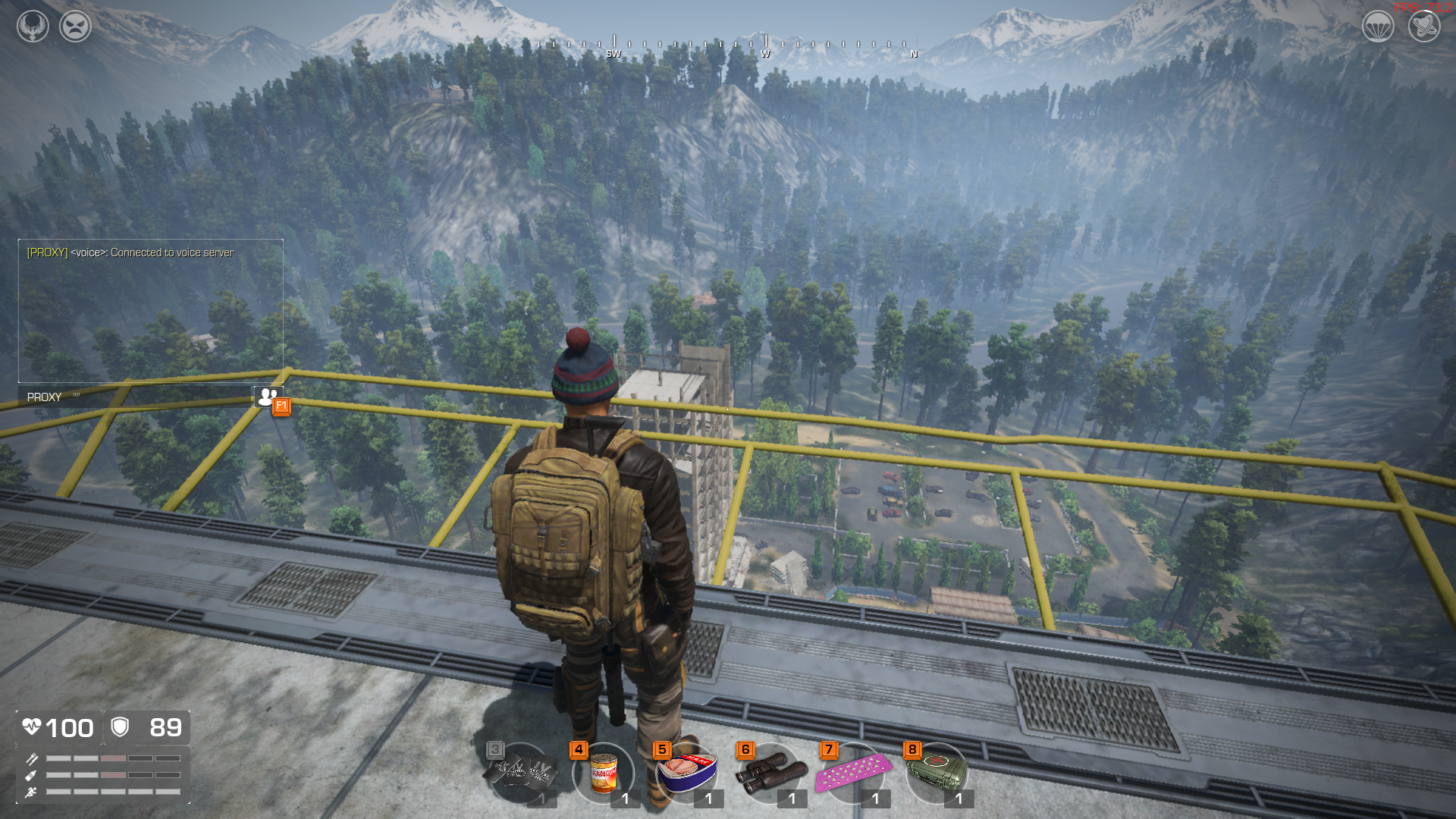 Shattered Skies is simply another half-baked multiplayer sandbox that has been thrown together with no real identity. It completely ignores a potentially interesting premise in order to facilitate an endless grind for loot. The lack of structure in multiplayer sandbox survival games is a staple of the genre, however, in most of these games, the mechanics and environment are designed to facilitate player generated purpose and/or narrative. In Shattered Skies, the haphazard mechanics and features do little to provide the player with any incentive to progress beyond grinding to make grinding easier. If anything, they work against the player, ensuring that the game experience will change little from the first hour to the fortieth. Given the number and diversity of titles in the survival sandbox genre, there is little reason to explore the world of Shattered Skies and plenty reason to give it a miss.