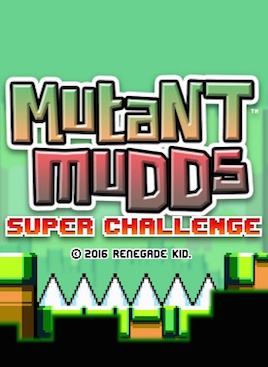 Challenge is back in 2016 with a bang. While the argument can be made that it never really left — numerous titles have offered hard/veteran alternatives when it came to in-game difficulty — challenge in the sense of treating player ingenuity, as much intelligence, with a bit more respect has been one that has gladly making rounds in the independent scene as of late. Be it solving literal puzzles, hacking-and-slashing adversaries or simply leaving it to the player to figure out what on Earth is going on, repeating myself I may be, it’s good to find those not brandished “AAA” recognize that in-game challenge stretches far beyond mere health/damage stats and should be as much tackled head-on as it is simply replicated.

That said, there’ll always be a space and a chair at the grand round-table of so-called “difficult games” (likely headed by a figurative King Souls) that aim to test not just player skill, but patience alongside. Renegade Kid’s Mutant Mudds Super Challenge could be regarded more an expansion of their original 2012 3DS title and less a sequel for this very principle. Super Challenge essentially underlines its content with the very name — a more challenging affair with a few new level additions. But while the premise and indeed overall structure may well be the same, that doesn’t mean the experience is any less inviting. Or indeed any less daunting.

For those who missed the original debut, or indeed its modest release on Nintendo hardware earlier in the year — and are only now finding out about it as it quaintly transitions over to Sony’s equivalent — Mutant Mudds is a hazardly-cunning 2D platformer, disguised as a mere rose-tinted, pixel-savvy (and possibly throw-away) “neo 8-bit” indie title. What lies underneath its bright, blocky art-style and intentionally directionally-limited control scheme, is a title that tests matters such as timing, reflexes and indeed patience as it does the aptly-grasped notion of conventional, trap-avoiding platforming. Super Challenge cranks up the difficulty of all this several notches; enemy presence increased, the act of timing jumps and killing said foes with your player-character’s water gun fundamentally more critical than the original set-up may have [cunningly] let off. 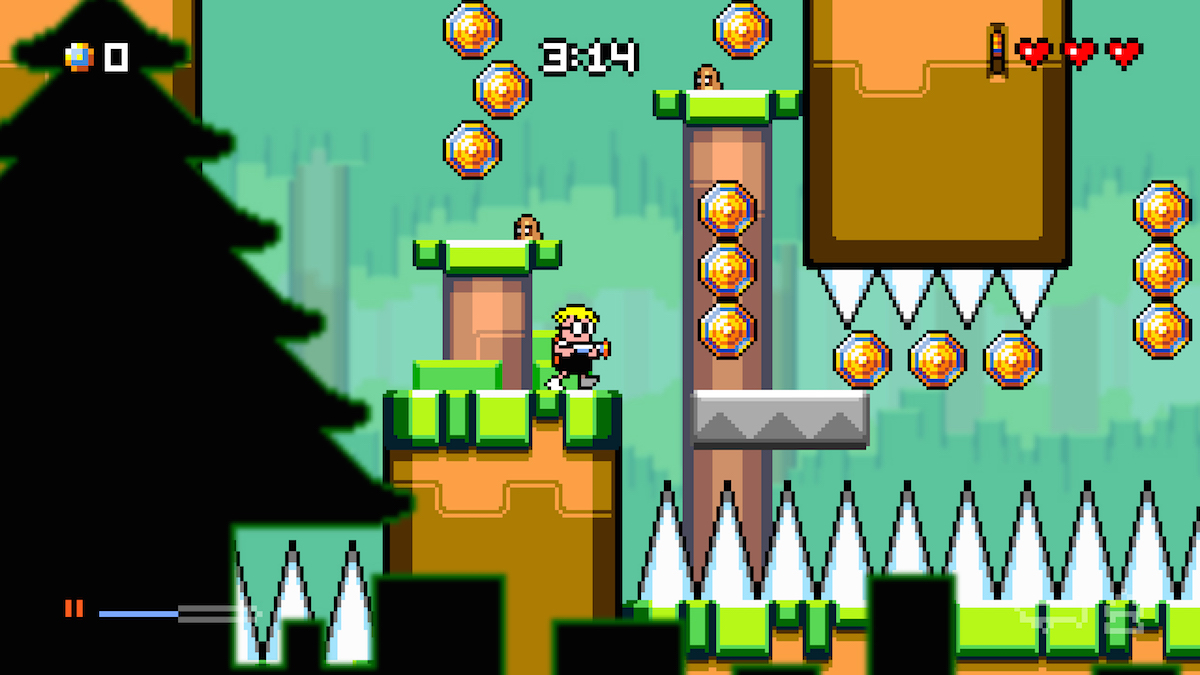 Despite its minimalistic set-up and often simplistic level design, Mutant Mudds thrives off such a deception and is far more memorable as a result. Levels may very well borrow from old-hat ideas on physic-based gimmicks — ice platforms that are rather more cumbersome to move on, or platforms that appear/disappear/reappear in timed loops — yet rarely is there a moment that doesn’t instil a satisfying dabble of frustration within the expanded release’s forty levels. From the get-go within level “1-1”, Super Challenge refuses to ease the player in, automatically assuming recognition, as much knowledge, on what you’re letting yourself in for is present.

For anyone completely new, the assumption of stiff movement by way of your player-character or the limited directional aiming may feel off-putting and clunky, yet it leaves what is so often a cakewalk in many other level-based titles feeling far more evocative. In Mutant Mudds, players are equipped with both a gun and a jetpack — the latter of these two items can be used to not just move, but also prepare for a later bold move; in some cases, the jetpack is critical in order to progress. While the aim in each level is to collect all one hundred gems scattered about and eventually reach the end goal, the difficulty in each event lies in tackling the very dictated limitations your movement and your aiming provide. 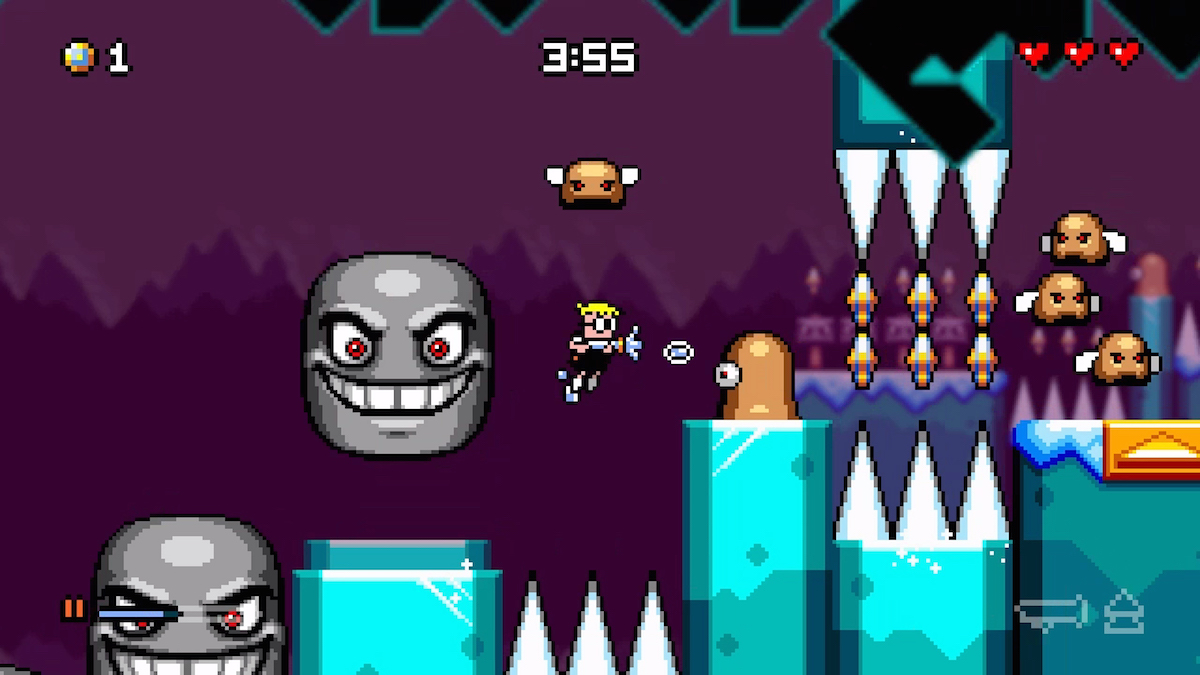 That said, there’s very little head-scratching to be had in order to find each of the hundred collectibles; some of the game’s allusion to “hidden areas” so blatantly obvious in how they’re accessed the existence of impossible-but-not-really to reach places can ultimately feel rather pointless. But even with the placement of gems easy to spot, there will be moments in-game where players may avoid risking such an acquisition altogether in order to simply complete a level and survive. As there’s only one checkpoint per level and with your character having but three hearts/lives to last each onslaught of multiple foes on screen at a given time, moments can regularly turn that bit more cautious when weighing up completing a level 100% and merely getting to said end. As a result, the fact gems remain permanently required upon a level’s return is a nice addition and one that, fortunately, doesn’t punish safer play-styles. Because, even from the game’s earliest regions, playing more defensively will often thrust itself to one’s focus on more than one occasion when it comes to item-collecting.

One of the main reasons for this additional internal debate comes in the enemy presence and its rampantly increased numbers here. Be it those that move left-to-right in tight spots or those you can’t even kill, it’s a constant case of delicate, tight movement and well-timed surges of speed in order to get past the well-structured, well-sequenced series of heart-depleting attacks and spike-covered pitfalls. Because of this, levels can shift dramatically from that of merely using your jetpack’s hovering ability to manoeuvre from one platform to another, to that of desperate lunges forward in the hope you’ve timed gaps in the enemy’s cycle of attack patterns, to perfection. The margin of error is almost always next to nonexistent; the most minor of slip-up’s often costing you more than what may seem initially likely. Yet some of Super Challenge’s best moments come when both control and timing are combined to highlight the Mutant Mudds all-round emphasis, like fellow 8-bit revivalist Shovel Knight, on delicately tight platforming. A notable example is where an enemy takes up an entire platform and it’s required, not optional, to not just kill the enemy (of which fires projectiles at you) but also, as a result of your weapon’s similarly-limited range, time your leap at the same time. 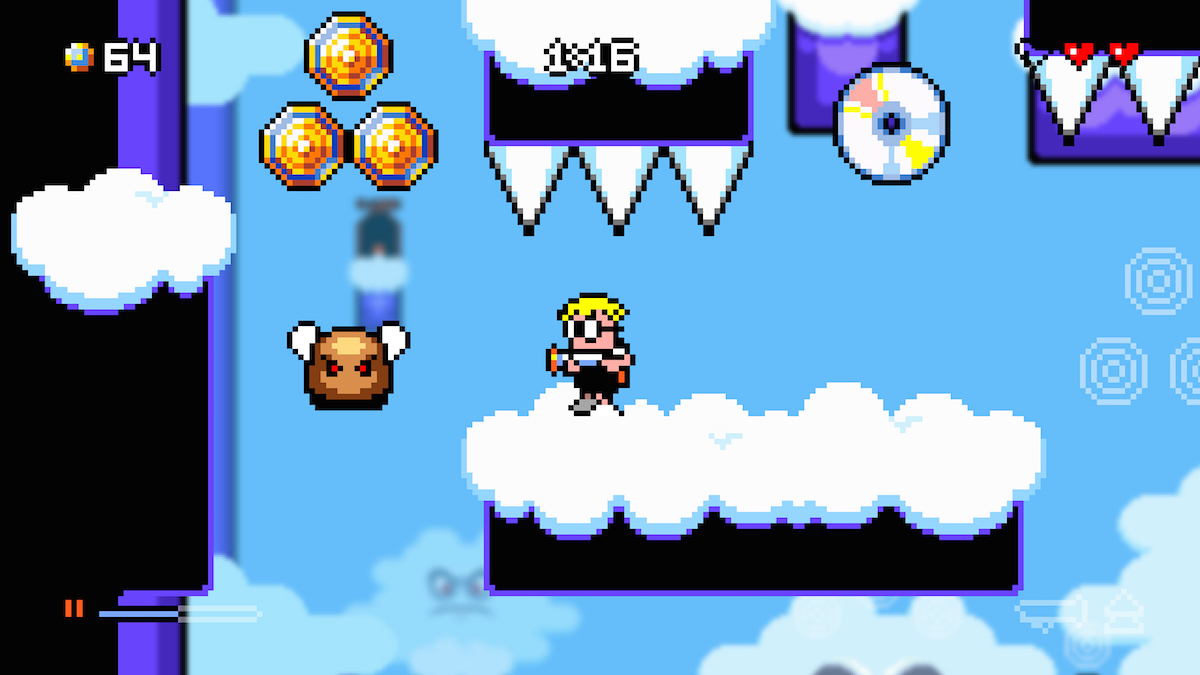 Though each level isn’t necessarily lengthy or indeed varied in its structural design, dimension-hopping between foreground and background (much like how Poncho implemented this into its level design and sense of progression) provides some neat spatial variety from time to time. Even if its very presence doesn’t offer any degree of  incentive lies in guessing right with the timing and given Super Challenge is loaded with moments of unilateral thinking and keeping one’s self focused, the presence of risk — and indeed self-made panic often winding up overwhelmingly costly — is never far away. Those who find the challenge a little too demeaning can find temporary solace in the ability to equip one of three power-up’s that range from a slightly spruced-up weapon, a vertical rocket-like boost and an increased time you can hover, but enabling these skills often takes away from the game’s main appeal. That said, said upgrades are necessary in order to access each of the main level’s hidden counterparts — each one taking the visual attire of a rather retro-nostalgic aesthetic such as a Game Boy-esque green tint or Virtual Boy-like red-and-black dominance — and in doing so, unlocking each of the game’s sub-section boss fights.

It’s clear these additional abilities are advised (though not necessarily demanded) in order to clear the conventionally three-hit engagements. Like the main levels, the margin of error is astute in its absence. Yet here this can sometimes unfortunately work against the game; the very nature of some of these bosses ending up a little too demeaning and punishing — enemy movement and the ease at which they can strike going completely against the grain of your own restrictive abilities and perks. This is often balanced out though by some clever boss designs and a continued emphasis on required thought before striking. A notable example being a Ghost-like boss that can only be hurt by acquiring a power-up — said power-up not only providing limited ammo at each phase and lying on another of the game’s dimension-hopping foreground/background 2D planes, but which requires you to trudge through hordes of similarly unkillable (by regular watery ammunition) enemies beforehand. The hope, by this point, that you’ve left yourself enough ammo left to eventually tackle the big bad before repeating the process at a higher onset difficulty. 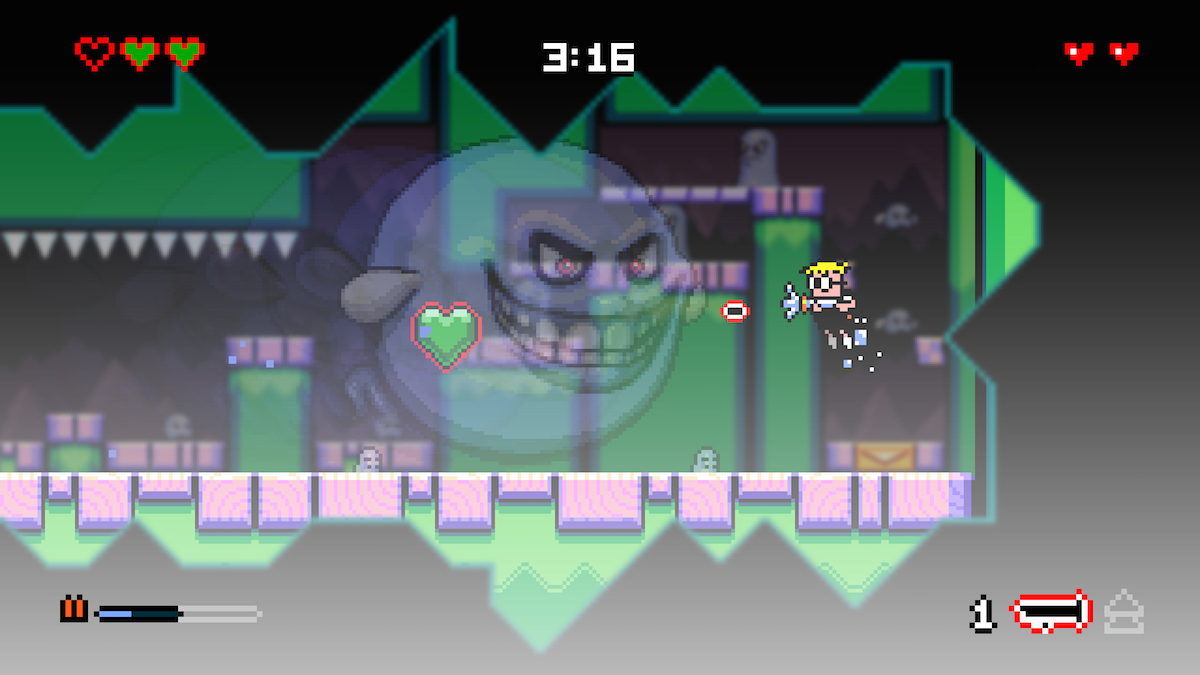 At its best, Super Challenge is a commendable and well-sought (if not fully diverse) expansion to Mutant Mudds’ already satisfying take on the less-is-more approach to game design. While the content (both visuals and all-round design) may wind up being mechanically more of the same, it’s the accessibility in its gameplay and enticement to conquer each set of life-ending hazards in each of the four-to-five minute levels that will leave many satisfied. Not just with the success of triumph, but so too with the manner at which the game carves out many of these temporary failures from the player’s side. Whatever platform you prefer, Mutant Mudds Super Challenge is at the very least a worthy pick for those who thrive on short-term adrenaline.