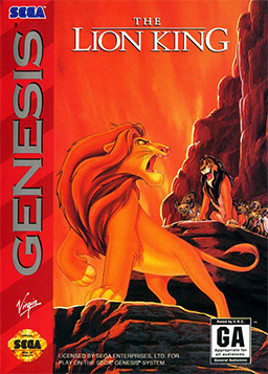 Whether it is my not so secret love of Scandinavian metal, my extensive time spent in prison or my admiration of the mountain of masculinity that is Montana, the commander in chief at Hardcore Gamer decided I need a kinder, gentler image, so the equivalent of video game journalism sensitivity training is to appoint me as the designated writer for the three Virgin Disney titles that have been released from the vault to be experienced by a new generation of gamers, or to be bought as a nostalgia fueled impulse purchase.  The Lion King saw its video game release in the final days of 1994, several months after its cinematic counterpart had made the phrase hakuna matata permanently etched into everyone’s consciousness.

The Lion King follows the plot of the movie and as such roughly half the game is spent as a rather nonthreatening Simba cub prior to Scar exiling him through the use of his hired goons  hyena goons.  The latter half is when he is a full grown lion and must return to the Pride Lands to take back his kingdom from his evil uncle.  How exactly the monarchical government is maintained among the different species is not fully clear, nor is the procedure on how usurping the throne works in the animal kingdom, but this is a platforming game, not a political simulator.  And like the movie, when Simba returns as an adult he is much more of a badass and ready to do battle with mean ole uncle Scar.  Am I allowed to say badass in a Disney game review?  I think the image softening attempt is failing.  Sorry, Steve.

There are a variety of levels that match the locations seen in the movie.  Young Simba eats bugs in the Pride Lands and against better judgement explores the outdoor ossuary that is the elephant graveyard.  Young Simba can only do his little baby lion roar and pounce on the other animals, but as an adult his roar has a little more bass in it plus he can swat with his massive lion paws and maul his prey.  There is quite a bit of tricky platforming to be found as well, one example of this is jumping up logs being washed down a waterfall.  One of the more entertaining aspects of the platforming involves Simba being catapulted by a rhinoceros up into the treetops where monkeys will fling him about until he has to jump on the heads of giraffes to get to safety.  This seems like an overly elaborate way to get from one side of a river to the other, but it provides for a fun level.  There is a required suspension of disbelief when the background contains rhinos stacked on top of each other topped off with a hippopotamus but that can just be explained through Disney magic.  Bonus levels mix things up a little where the player can take control over Pumbaa and try to catch as many bugs as possible that Timon drops. 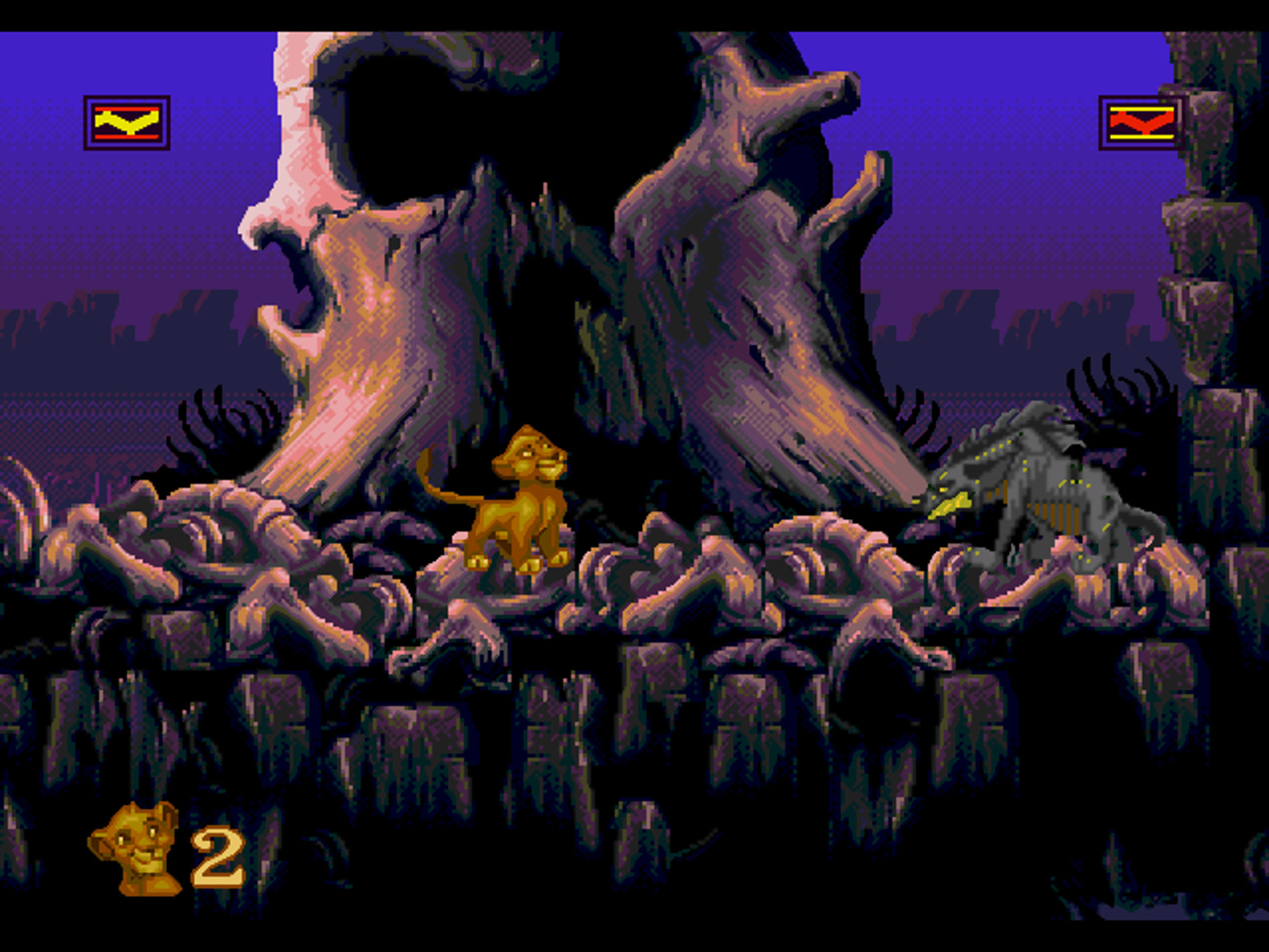 Most levels involve controlling Simba in a traditional 2D action platforming environment, but to add some variety the wilderbeast stampede scene from the movie has been recreated.  The camera focus is now on a terrified Simba’s face as he runs through the stampede, dodging these herbivorous behemoths charging from behind that could be his prey if only he wasn’t still a cub.  Additional obstacles in Simba’s path increase the challenge.  People with foresight probably remembered watching this scene at the theater and thought “that level is going to suck.”  They were right, but it sucks in a good way.  There will be many frustrating deaths here, but they are the deaths that motivate you to try again, provided you don’t suppress all anger by saying “hakuna matata” until the pressure reaches volcanic levels and you smash multiple computers in an electronics store display.

The visual presentation is impressive for its era and original hardware.  The animation is especially fluid for 16-bit hardware but that is the reputation that Disney games had developed by the time this title was released.  The graphics are as close to recreating the quality of the film as one could have hoped for as the sprites recreate the charm of the animated film.  But here comes the part where nostalgia and reality clash, the graphical limitations of its time are more apparent than ever thanks to higher resolution displays, being spoiled by improved graphics technology with modern games, and the nostalgia filter convinces you that impressive graphics for its time were really better than they were (I love keyboard shortcuts).  Graphic technology limits aside, this is still a good looking game. 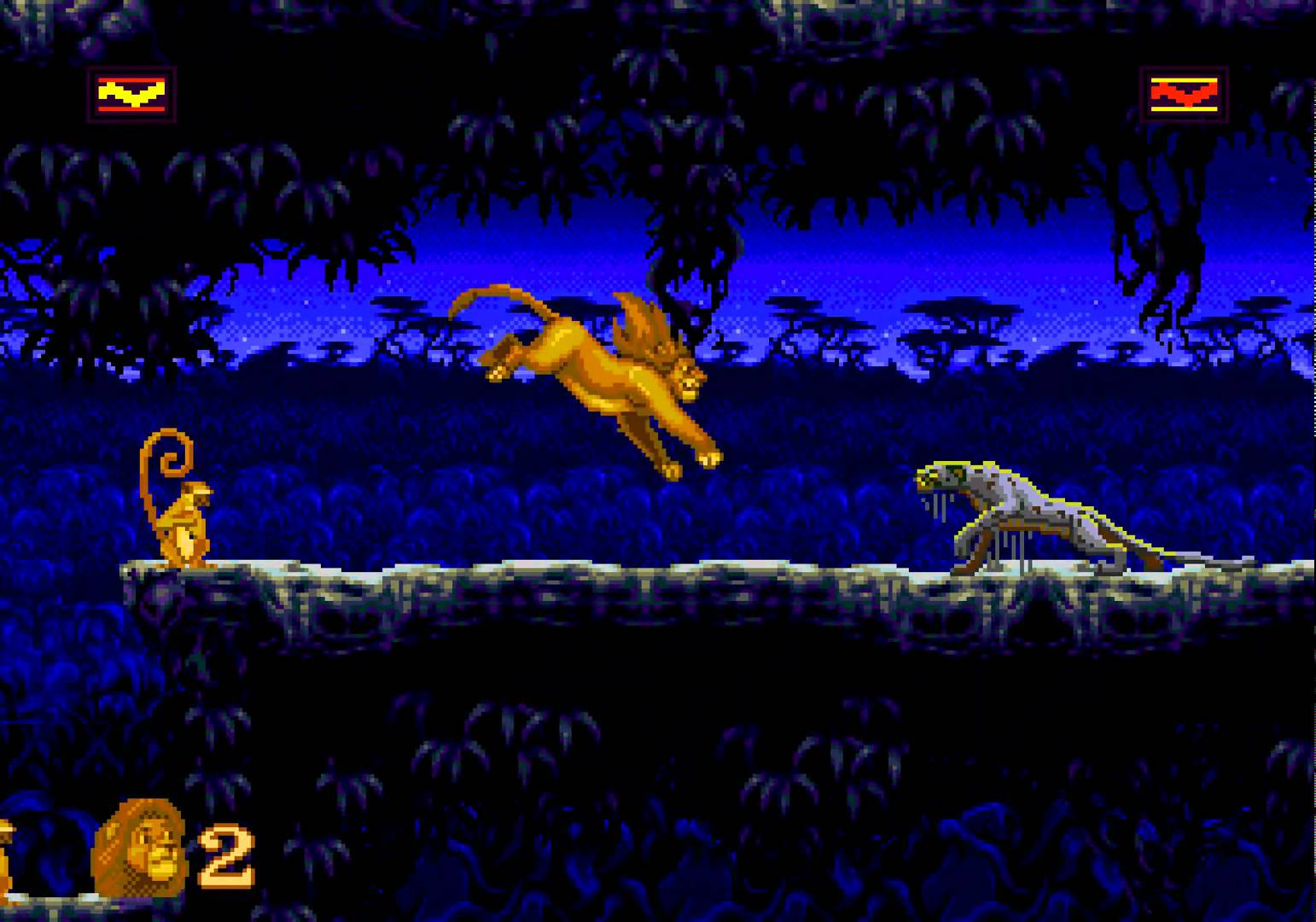 The upbeat songs from the film are present in their vocal free Chiptune Muzak format, and songs like I Just Can’t Wait to be King or Be Prepared are faithfully reproduced to the point where it is difficult to fight the urge to sing along with them, despite there are no vocals to sing along with.  Protip:  when singing along to lyric free video game music it is advisable to make sure no one else is home.

Anyone who has paid attention to what reviews I write (all two of you) are aware that bad controls are a major point of contention.  The Lion King does not suffer from that problem at all.  Controlling Simba in any situation is remarkably easy, and in this particular port customizing button input works flawlessly.  There is gamepad and keyboard support so you have the choice of what method of input is used, but just like the drinking cup selection incident at the end of that one Indiana Jones movie it is possible to choose poorly.  This is a good game, do not ruin it by playing with the keyboard.  Invest in a controller and play the game the way it is intended to be experienced.  This was originally an SNES/Genesis game.  Mario and Sonic were not powered by CTRL and spacebar, and neither should Simba. 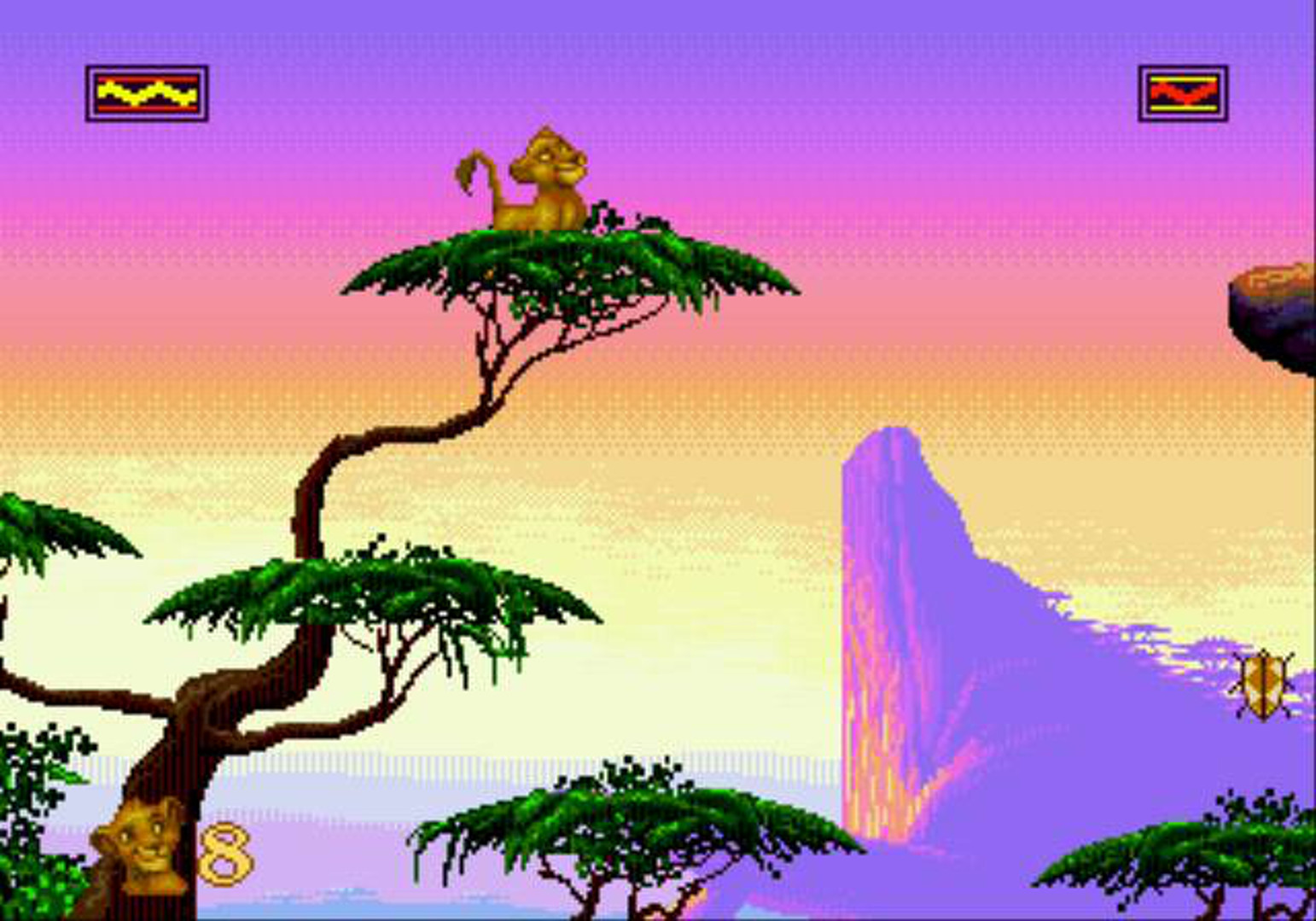 The Lion King is a celebrated film that was given a video game adaptation that does the source material justice.  The level designs are varied enough to keep the game interesting, both in terms of visual design and gameplay mechanics.  The Lion King does contain a respectable challenge level, so it may be frustrating to very young players or people who haven’t had much gaming experience.  The graphics, music and limited voice acting do a great job of recreating the feel of the movie.  If this game was a person it would be enjoying its first year of legal drinking, so the burning question is does it hold up today?  The answer in this writer’s opinion is yes.  It may not be as impressive as it was in 1994 and the nostalgia goggle may be covering up some imperfections, but it is still a fun title.