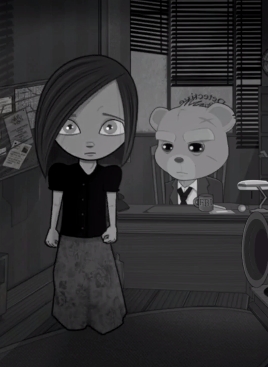 Since it’s still on everyone’s mind, it’s best to begin this review by talking about the Suicide Squad film. In particular, Jared Leto’s performance as The Joker. While a lot of the character’s presence in the film and the actor’s habits have drawn lots of attention, at least a few critics have noted that it’s actually hard to judge Leto’s performance when his entire role in the film basically amounts to a glorified cameo, barely having enough time to leave any real impact (though several of his scenes were reportedly left on the cutting room floor).

I bring this up because I kept thinking about Leto’s Joker after playing the first episode of Bear With Me, the cartoonish noir adventure game from Exordium Games. Whatever potential it may hold, it’s over so quickly and with so little impact in its debut that it feels just odd to review it as any sort of whole. To emphasize how little happens, I can actually pretty much say without hyperbole that if you’ve seen the game’s trailer, then you have literally seen everything the first episode has to offer. Every plot point, every character, every location (well, a bathroom and a bedroom aren’t shown, to be fair), so if you want, you can just watch that again instead and get the same experience as actually playing the game.

Mind you, it’s not like the game at the center of this is any bad, it’s just that like The Walking Dead: Michonne, this is an episodic adventure game that really should not have been episodic. Bear With Me is the story of Amber, a young girl who brings her sentient teddy bear detective Ted E. Bear out of retirement in order to solve the mystery of what’s been going on in the stuffed animal-inhabited world of Paper City, including a ton of fires, a looming presence known only as the Red Man, and the disappearance of Amber’s brother Flint. Of course, you sadly won’t be delving into much of this, since the first episode only deals with Amber and Ted having to actually get into Paper City, which is on lockdown, in a journey which takes about seventy-five minutes to complete. 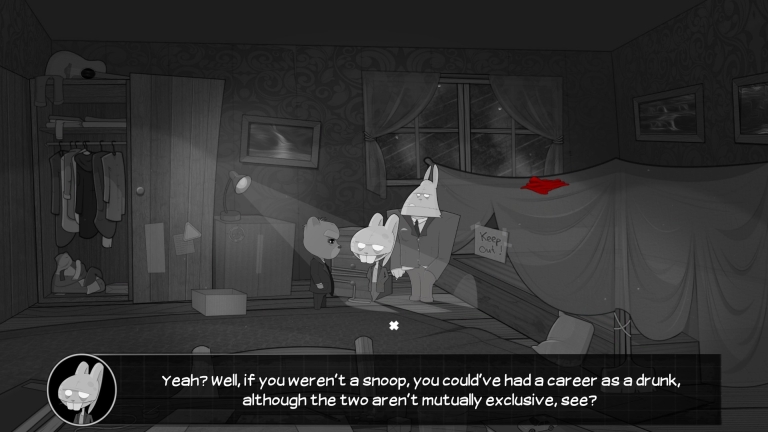 Obviously, the first thing to note about Bear With Me is the game’s film noir atmosphere, complete with a black and white color scheme (with the occasional dash of red courtesy of our mystery man). Most of the actual noir bits come mainly from Ted and the other living toys, with Amber and her semi-Kristen Schaal-esque voice providing more straight humor with each observation. The dialogue is quite witty and acted well, with the voice acting for Ted and the like nailing the grizzled and shifty character types of the genre perfectly. Even though the occasional fourth-wall joke flounders (largely due to not fitting the mood that well), the writing is still good overall, and it says a lot that a majority of the achievements (of which there are surprisingly a lot) come from interacting with as much of the upstairs world around you as possible to get a laugh.

But all of those achievements – with at least one rewarding a second playthrough – still don’t excuse the game’s length. Not that length itself isn’t an issue in games, but in cases like this it’s more about a lack of substance withing that length. The puzzles in this game are a good example of that. Since this episode only covers what is essentially the prologue or intro, the puzzles are incredibly basic, and not particularly challenging, like simply moving a statue to get a safe’s password (a three-digit password, no less). The only challenge comes from occasionally coming across a part that seemingly ignores logic. At one moment, you have to get a key in a study from a hook out of reach. Well, we’ve picked up a plank of wood, that should jostle it…no, you don’t think that would work? Well, now we also have duct tape and a nail, that should create a proper extension that…no, still not good enough? Oh, you needed us to use the nail to pick the lock on the grandfather clock so that we can take a hook from the chain inside, and tape that to the wood? Yeah, why not. Truly, that was the more efficient option.

Incidentally, this section of puzzles showcases two moments where Bear With Me’s graphics and art style falter a bit. The key in the study obviously seems to be within Amber’s reach, and afterwards, the hook used for that puzzle is used to open an attic door, and the perspective makes Amber appear blatantly out of reach now, even with the hook. But aside from that, the cute and fun-looking designs are enjoyable and provide a nice contrast, the graphics are still pretty charming, and the soundtrack fits appropriately. It’s just a shame it doesn’t get enough time to shine in these early moments. 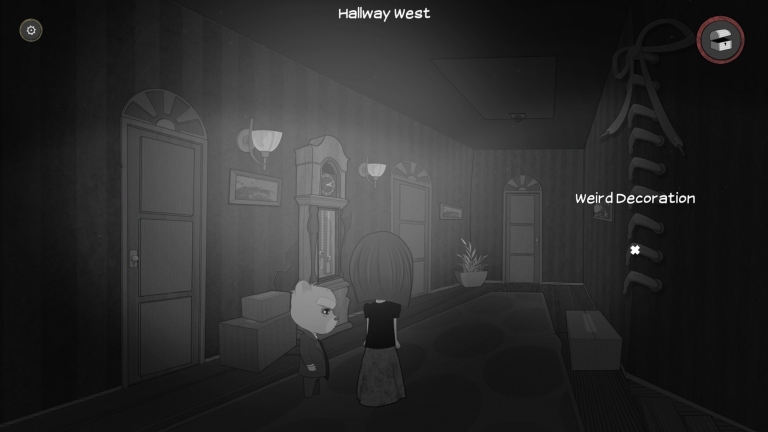 The first episode of Bear With Me still hints at a greater game to come, nicely setting a proper noir tone with some occasional creepy bits and a gleeful dose of snark throughout. But it sadly says a lot that the initial outing feels more like a demo for the game than an actual full-fledged chapter of the story. Except for one moral choice you get to make, there are no real twists and turns here, just nothing but a setup for better things to hopefully come and a handful of average-at-best puzzles. The dialogue is snappy and well-written, but even with that, there really isn’t much of a reason to pick this up right now. With any luck, Paper City will reveal something greater, but you can keep Ted locked away in the closet for now.