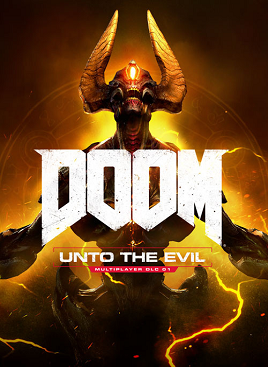 Doom- Unto the Evil

When Bethesda and id released the Doom reboot, the campaign met with universal acclaim. It was gory, funny and reverent of the source material while introducing new mechanics, managing to be both Doom and something else entirely. Nevertheless, it serves as a guiding point on how to reset a franchise. The multiplayer mode was not as well received, though. Overwhelmingly, it was regarded as “just okay.” Something that doesn’t detract from the package, but also not a destination point.

This reception is a point of confusion. The multiplayer took some aspects from the campaign, such as mantling up a high ledge, and kept the frantic speed found in the original games. Admittedly, it’s a bit closer to Quake than Doom in feel, but it does have merit. The matches tend to feel chaotic and wildly out of control, as such only the quickest and most skilled have any grip on the situation. My personal theory is that the criticisms stem from the map design, which felt inconsequential and poorly refined. This is where the first paid expansion, Unto the Evil, comes in. The pack comes with three new maps, two new weapons, a new costume class, a new demon to control, new hack modules and more emotes and dances than one would consider healthy. So, it is a rather stuffed package for Doom multiplayer fans.

One of the most interesting things about this package is that each of the three new maps are so much better designed than what is in the base game. It’s telling that, when one goes to find a multiplayer match, the vanilla servers are empty. The option dedicated to Unto the Evil, though, is well populated. Waiting for the match to load takes longer than finding a pick up group. Of course, these pick up groups now had an anchor on their team in the form of me. Of the three maps, the best one is Cataclysm. This larger map is made up of interesting locations, from a pristine, futuristic looking technical installation, a gore covered hellscape, to a craggy, ancient cave system. The arena has a story to tell regarding the fall of the human manned station. A large portal connects one area to another and it’s just great fun to play. 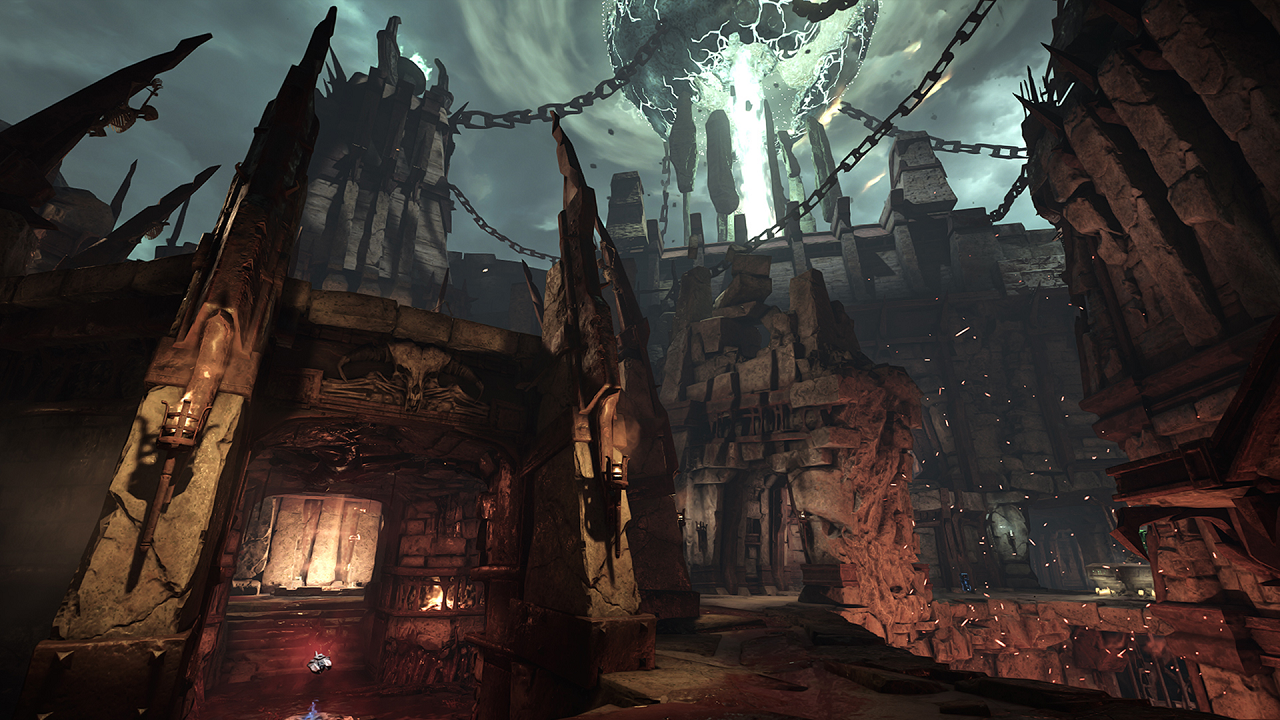 The frozen Ritual takes the second spot. A ice covered wasteland, it’s filled with all sorts of platforming opportunities, allowing players to utilize their mobility to frustrate opponents. It’s cohesive and wraps around extremely well for the deathmatcher not afraid to take risks. The final is Offering. It’s not a bad map on it’s own. In fact, it still holds up better than the base game arenas. Still, the other two are more memorable, whereas this one is bereft, with the exception of one room with an arcane crystal structure, of any truly engaging landmarks. Playing a match here isn’t bad, though. It’s just more bog standard.

Also included in the pack are two new (for multiplayer) weapons. The cooler of the two would be the Kinetic Mine. A drop and forget weapon that goes into the equipment slot, it tracks, for a short distance, the unwary enemy who passes by. It can be disarmed by shooting it. During play, the best strategy found is to toss it onto the ceiling of a narrow area. People don’t look up, and there isn’t much space to run when the telltale chirp of it being triggered is heard. Alternatively, sticking it behind a health pack is just fun for everyone involved and never results in a vengeance seeking opponent into a rage. No sir.

The UAC EMV Pistol also included is disappointing. Much like the pistol in the campaign, its shots are weak and requires a pull of the trigger each time. The secondary option is to charge it for a stronger shot, but it still does touch any of the base weapons for flexibility and usefulness. Frankly, the point of this weapon is elusive, as it adds nothing to the proceedings, requiring the precision of the Hellshot with a fraction of the damage. I managed to score two kills with it. One was on a player who was obviously experiencing network issues, and the other was pinging someone who barely won a rocket duel against a teammate. 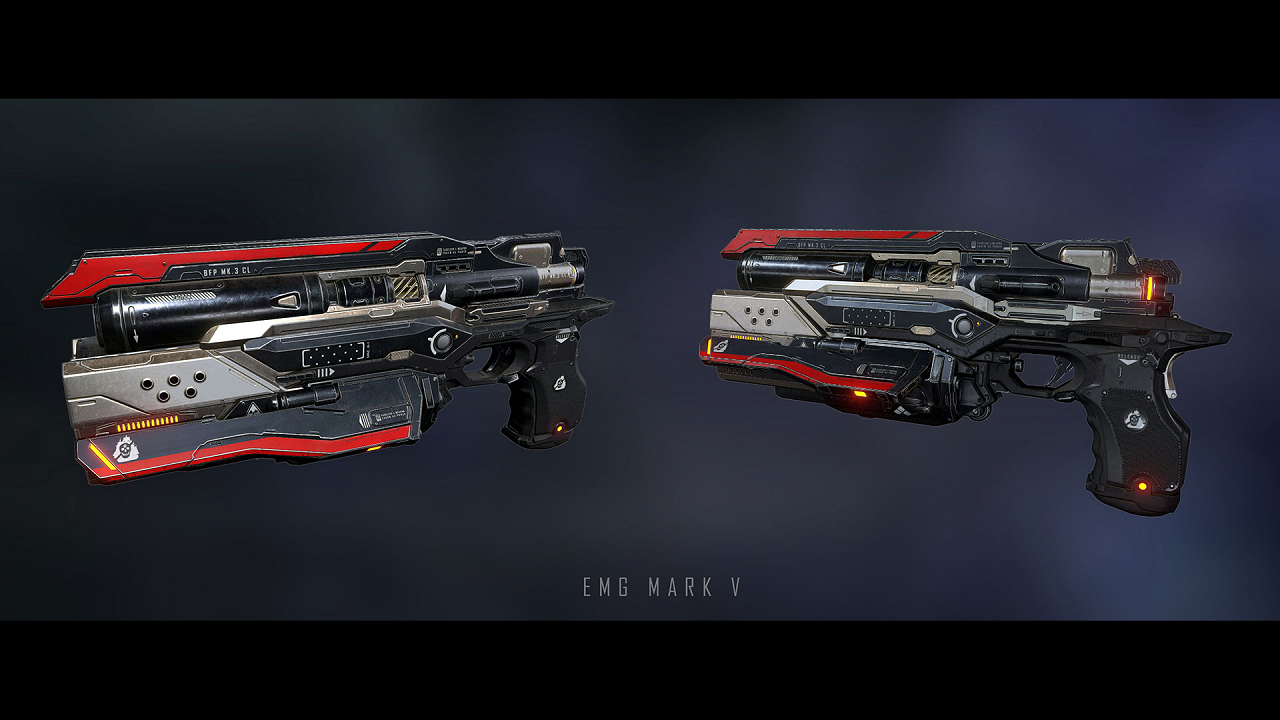 The new playable demon, known as the Harvester, is a rather fun addition. This guy fires off a steam of hellish electricity that decimates foes and charges its alternate weapon, a short range spread attack that means instant death for any opponent nearby. Though a little light on health when compared to some of the vanilla demons, this creature is still balanced in a way to favor the player in control, with its quicker traversal abilities. One could even argue that it’s overpowered, seeing as how I was able to rack up the killstreaks with him and I, frankly, suck at the game. Still, he’s a worthy addition to the matches.

Finally, there are the hack modules. These…aren’t very exciting. I tend not to use them during play, as they are limited in duration before they are gone forever and need to be earned again. There’s just a psychological pull that compels one to save them for when they are important, even when that time is “when the match is being played.” The ones here don’t add much, with the exception of Treasure, which grants armor whenever ammo is picked up. 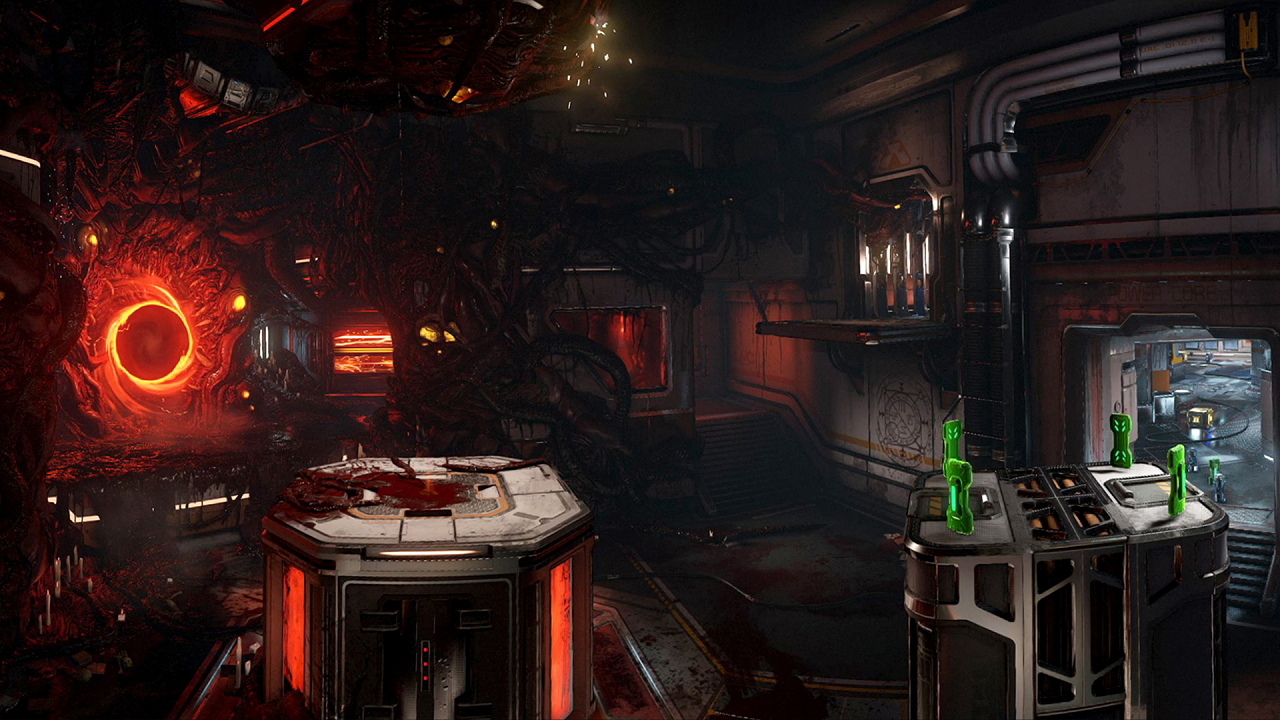 Many expansion packs can easily be dismissed as “more of the same for those that want it.” Unto the Evil sidesteps this. It’s an easy recommendation to players that liked everything about the speed and feel of the combat but disliked the maps; these new ones are so much more enjoyable. For those looking for new toys, the Kinetic Mine and the Harvester are great. Otherwise, there isn’t much there. Lastly, for those players who just want new things to progress towards, they should know that every new item is unlocked from the beginning.