With the beta for the next PlayStation 4 update, codenamed ‘Shingen,’ commencing on Tuesday, August 16, Sony Interactive Entertainment revealed today some of the new features included in the upcoming system software update.

Jayne Murphy, product manager at Sony, posted on the PlayStation Blog that the PS4’s UI has received a “lot of adjustments and improvements,” resulting in “revised pop-up notifications, updated system icons and new system backgrounds to choose from.”

The PS4 will also receive a new ‘Quick Menu’ feature, accessed by pressing and holding the PS button on the DualShock 4, which will only cover a portion of the screen and, for example, means that players don’t necessarily need to return to the console’s dashboard to check their new trophies.

According to Murphy, players can customize their PS4 Quick Menus with additional shortcuts.

Share Menu, like Quick Menu, will only cover a portion of the screen when selected now, as well as speeding up the process of posting video clips and screenshots by remembering the last social networking website the user opted to share their content to.

Video clips that are longer than ten seconds can now be posted on Twitter from the PS4, with Sony upping the maximum length to 140 seconds.

“One of the big requests we get from you is for more options to organise content on PS4,” Murphy wrote. “With this update, we’re adding functionality to create folders on PS4’s content launcher and library. This will help collect your favourite games and select apps in one place for quick and easy access.” 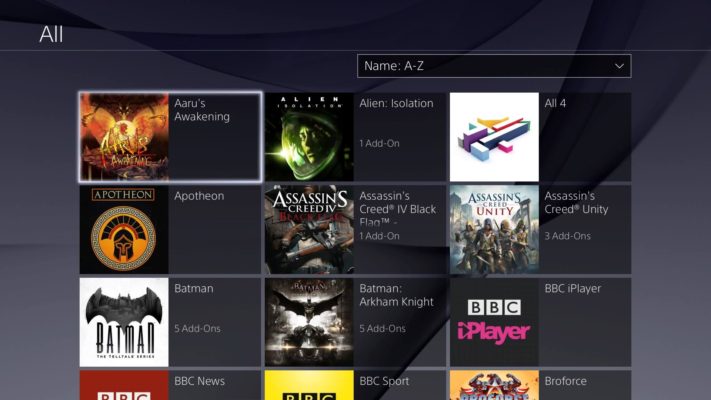 Along with the introduction of folders, Sony has said it’s made “pretty big changes” to the Library on PS4. Accessing the Library will now have a ‘Purchased Content’ tab, separating all of the purchases you’ve made from the content that’s actively installed on your PS4.

The feature will “really help [to] de-clutter your Library,” Sony suggested.

“There are some new sorting tools for your Library as well allowing you to sort content by purchase date or install status,” Murphy added. “Also you can search for specific games and apps via text input.”

Trophies will receive a new ‘offline mode’ option, allowing users to access their trophy collections without being connected to the PlayStation Network. Additionally, Sony has added a button that will reveal the trophy name and information behind hidden trophies.

“Lastly, we’re changing the icons that show how rare a trophy is,” Murphy said. “Instead of four boxes that fill, the icon looks like a pyramid with the ultra-rare trophies at the top.”

User Profile is the last feature that Sony outlined in its Shingen post. Sony plans on making it “easier to see relevant info for a player,” which includes trophy progression between two players being shown directly from their profiles.

A Screenshot from a title can also be applied as a background to your personal profile with the changes being implemented to User Profiles.

“The 4.00 update has even more features that won’t be available in the beta, so stay tuned for additional info on what to expect,” Murphy teased. “We’ll be back with more info on 4.00, including its launch date, in the coming weeks.”